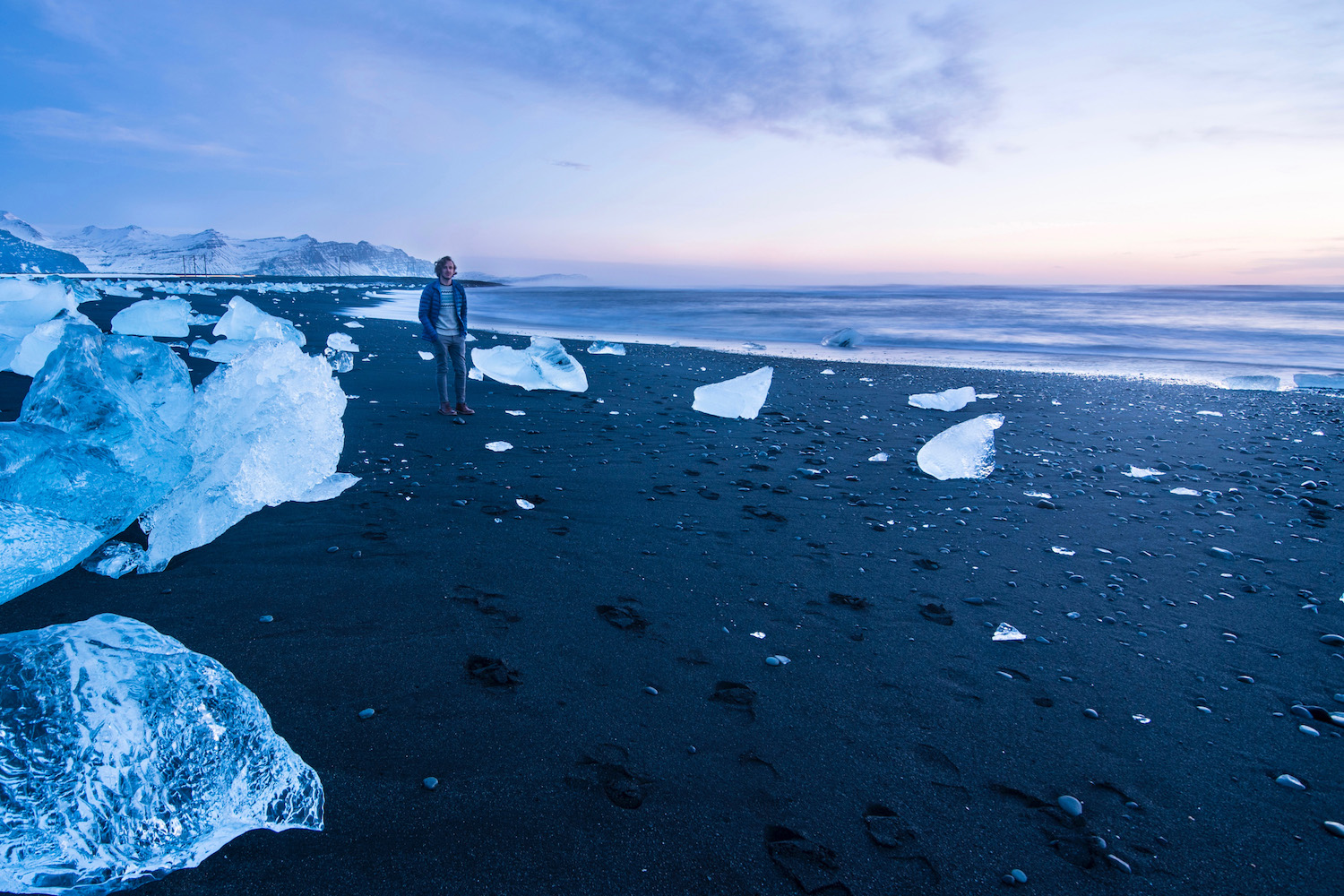 I didn’t want to visit Diamond Beach Iceland because of anything I’d seen on social media—at least not travel-related social media. Rather, I’d been mesmerized by a landscape depicted in a video by one of my favorite artists and, feeling relatively certain that it was in Iceland, began eagerly searching the web.

Initially, I simply assumed the shots might’ve been taken along the shores of Jökulsárlón Glacier Lagoon, which at that time was probably the most ubiquitous Iceland destination among the influencer crowd. Turning up to the lagoon, however (and walking too quickly onto said shores, which caused me to slip back and crack my head on the ice) made me realize that my estimation had been a bit off.

The bad news? I wasn’t able to procure an outfit that was anywhere near as fabulous as the one Jonna Lee wears in the “Vista” video. The good news? I was able to locate this most stunning of Iceland attractions, in the early morning no less, when the pastel hues of the sky perfectly contrasted with the black sand and prismatic icebergs resting atop it.

Whether you’re thinking to visit Diamond Beach in summer or winter (and I’ll talk about the benefits and drawbacks of both in just a second), the most important thing is getting there. If (assuming you’re taking an Iceland road trip) you set your GPS for Jökulsárlón, you will find the Diamond Beach just to the east of the lagoon mouth, right along the sea.

As far as when to visit, it’s as important to consider the Diamond Beach Iceland weather (cool but pleasant in the summer, absolutely frigid most of the rest of the year) as it is the lighting conditions and the number of icebergs. While you’ll find the proverbial diamonds all year long, they’re obviously more prevalent during the winter months, when there are fewer tourists (and the possibility of the Northern Lights—more on that in a second). On the other hand, summer counteracts its crowded with more light and, in June, the Midnight Sun.

Things to Do at the Iceland Diamond Beach

Depending on what time of year you visit Black Diamond Beach Iceland (and I’ll speak more about your options in just a moment), sunrise and/or sunset are some of the best times to visit Diamond Beach Iceland. The pastel hues that light up the sky, particularly during the winter when they take hours to fade in and out of darkness, beautifully contrast with the black sand of the beach below.

As you probably realize by now, Diamond Beach Iceland isn’t actually covered in diamonds—the icebergs on this beach are much bigger than any rock you’ve seen on someone’s finger! In fact, if you visit in winter, you can expect to see icebergs that are literally big enough for you to stand on, to say nothing of the other interactions you can enjoy.

Marvel at the Northern Lights

The bad news? When I visited Diamond Beach, the clouds over it (and the Glacier Lagoon) were too thick for me to see the aurora, which I didn’t see until much later in my trip. The good news? You might very well be luckier than I was—and if you are, you’d best believe you’re in for an incredible treat. The Northern Lights are typically visible in Iceland between about November and March.

Revel in the Midnight Sun

If, on the other hand, your Glacier Lagoon tour takes place during the summer, you can enjoy a different phenomenon over the Diamond Beach: The Midnight Sun, which sees more light than average between about May and August, but is more intense around June 21, the longest day of the year. This is a great time to visit if you want a lot of time to get the perfect photo! 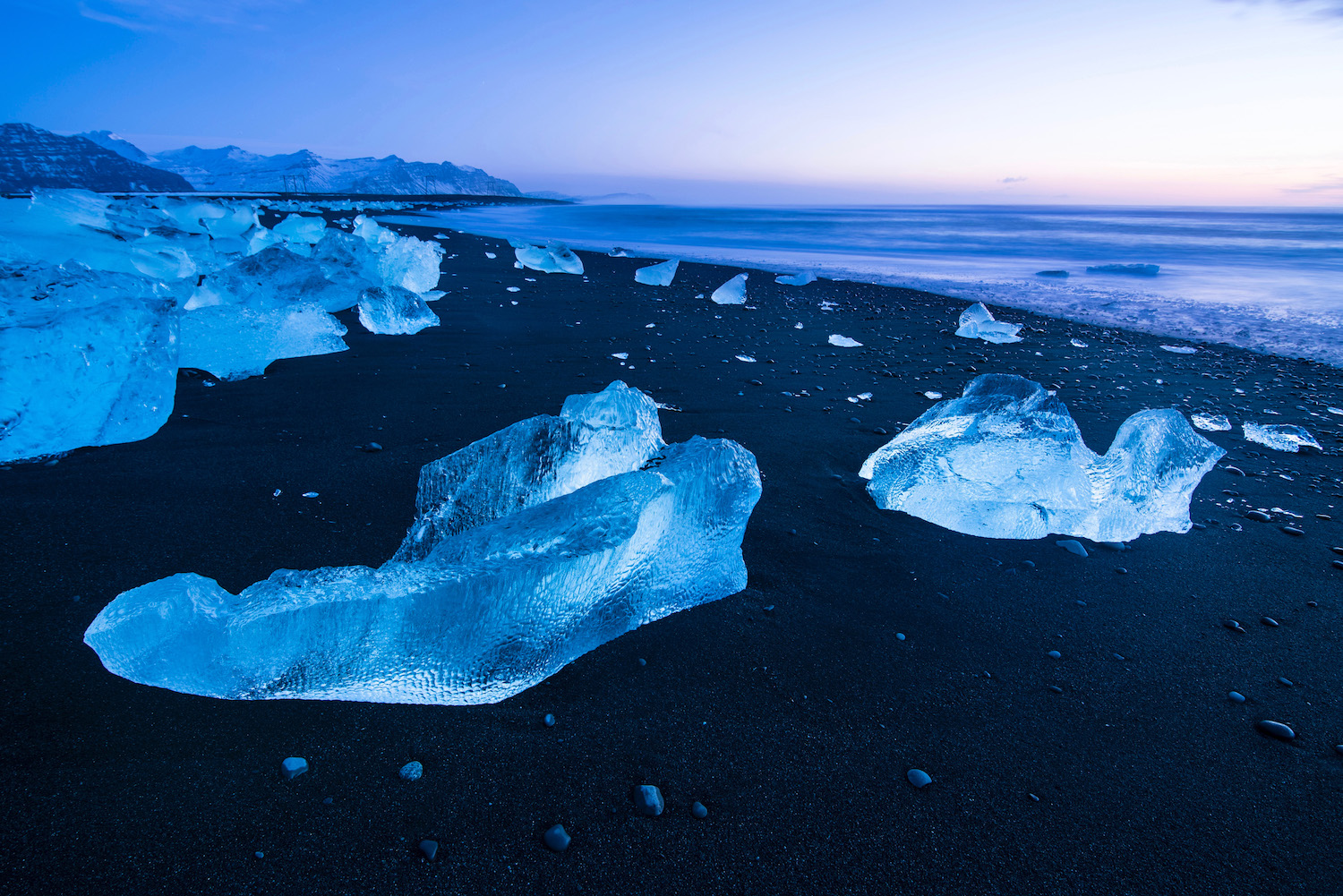 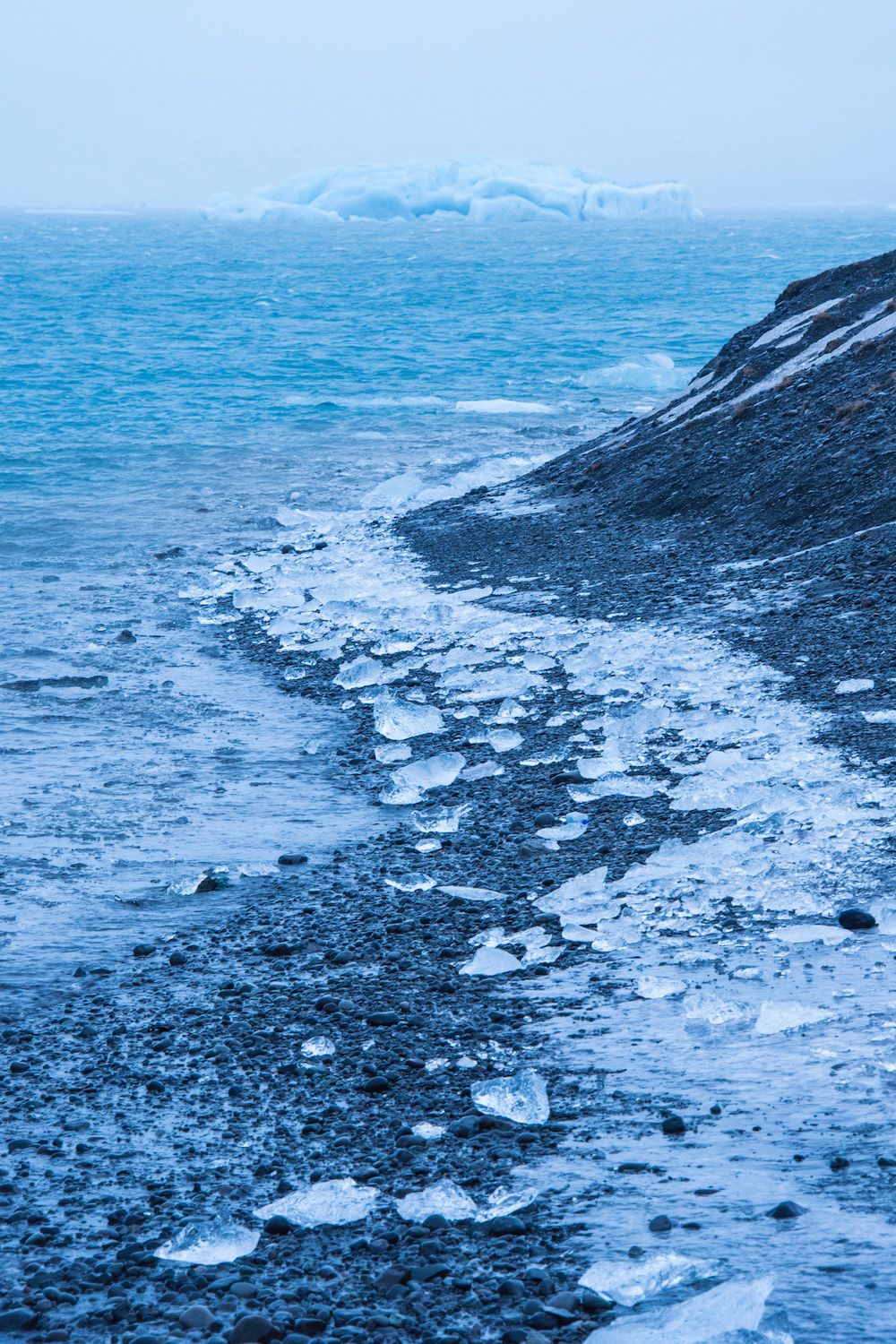 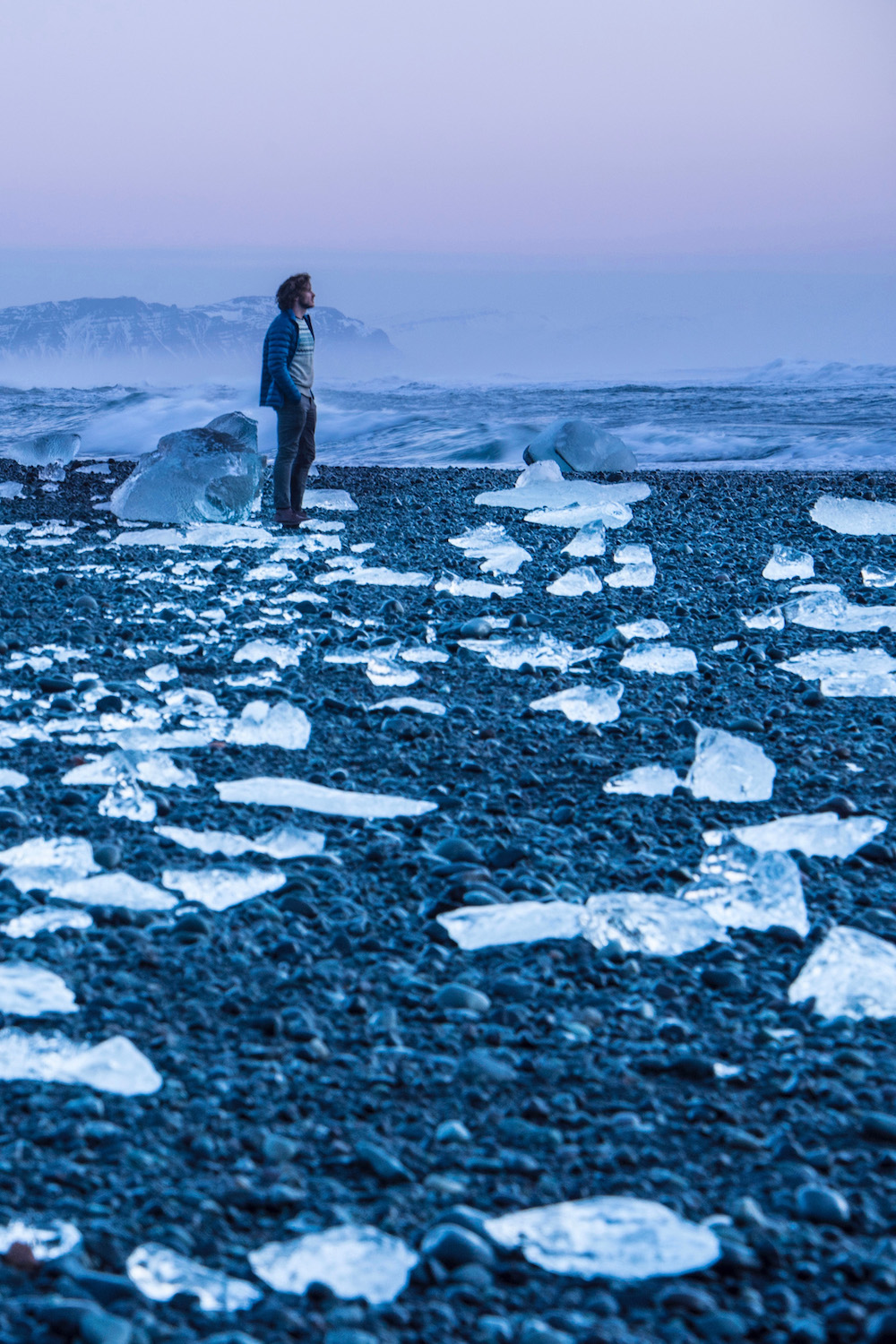 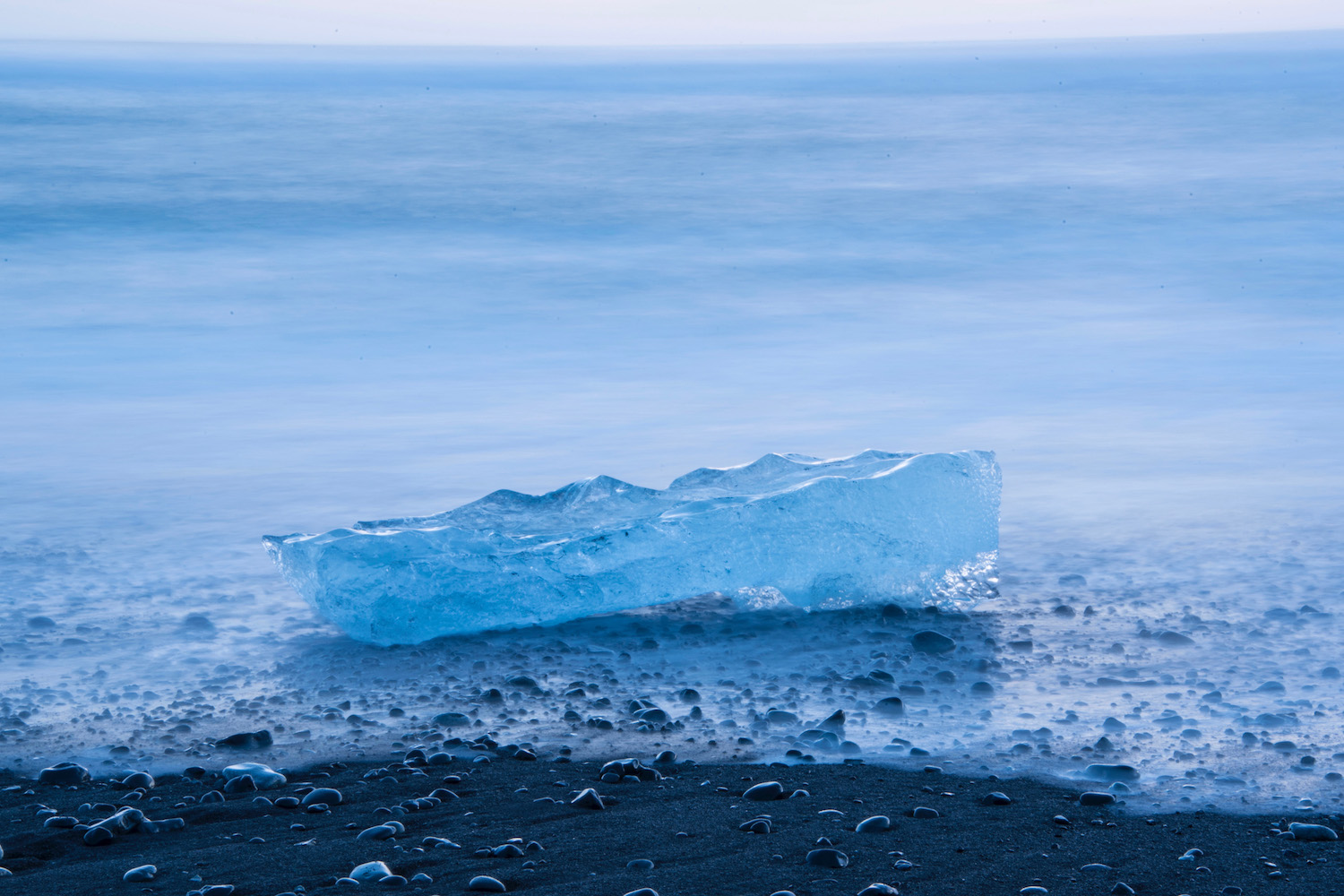 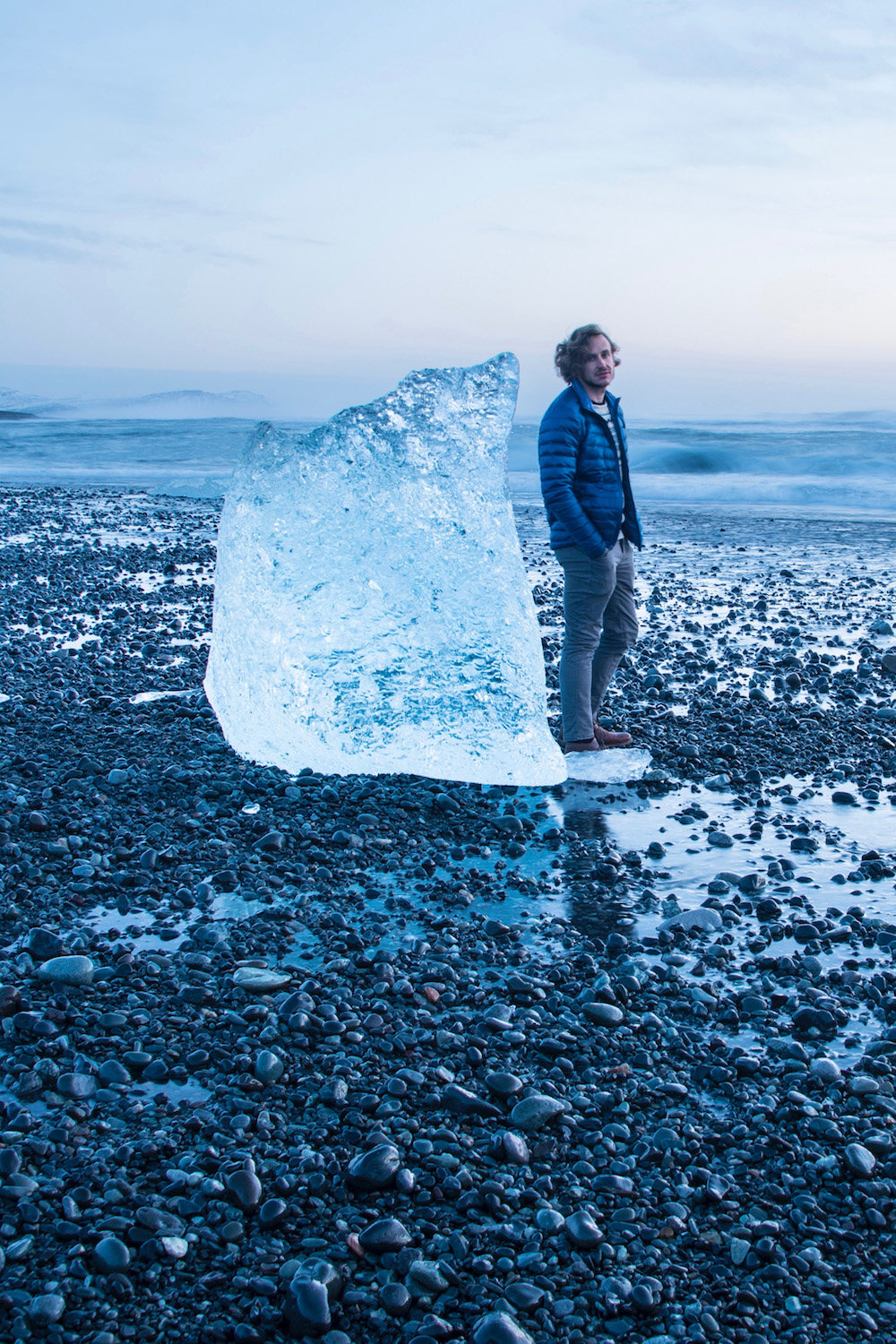 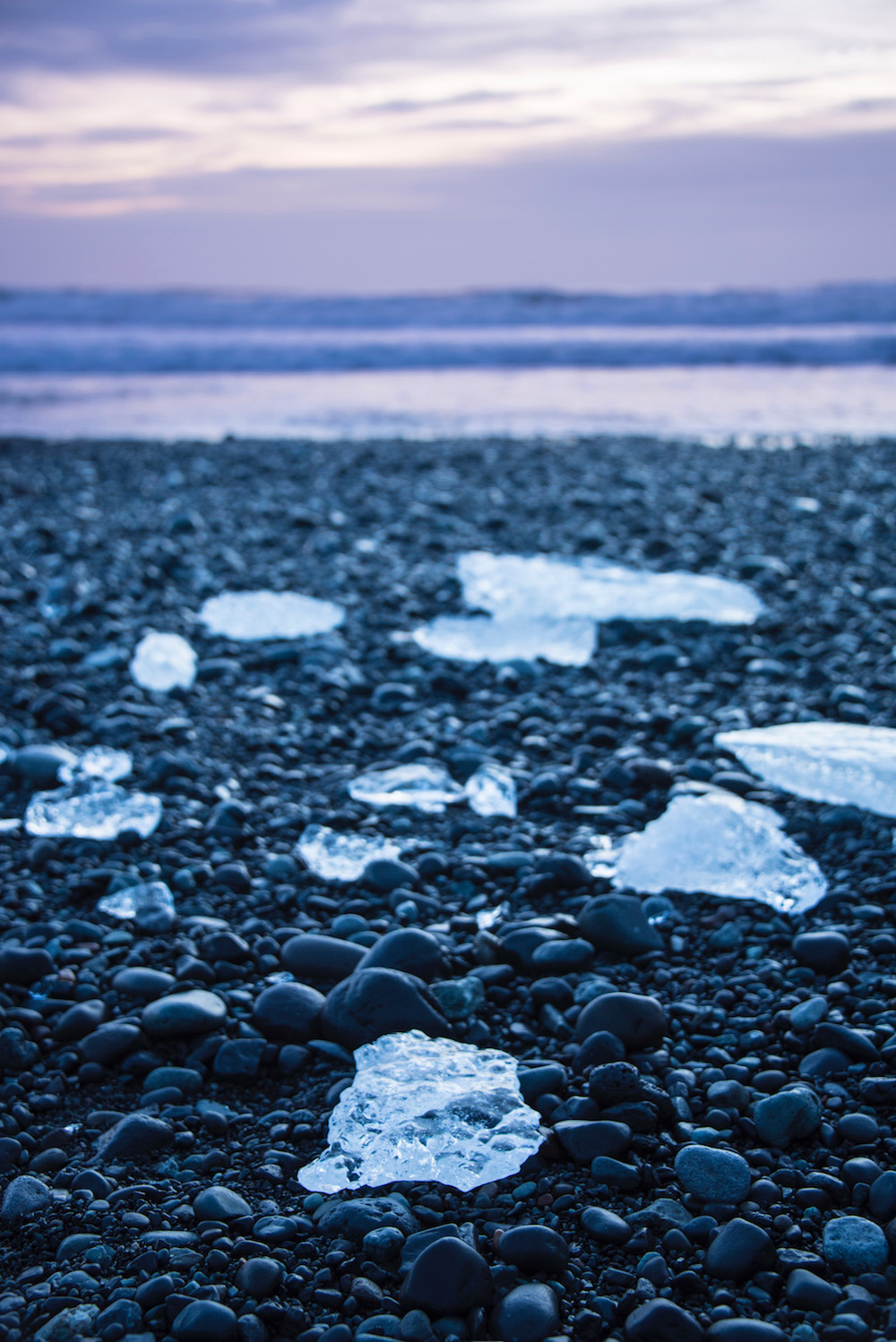 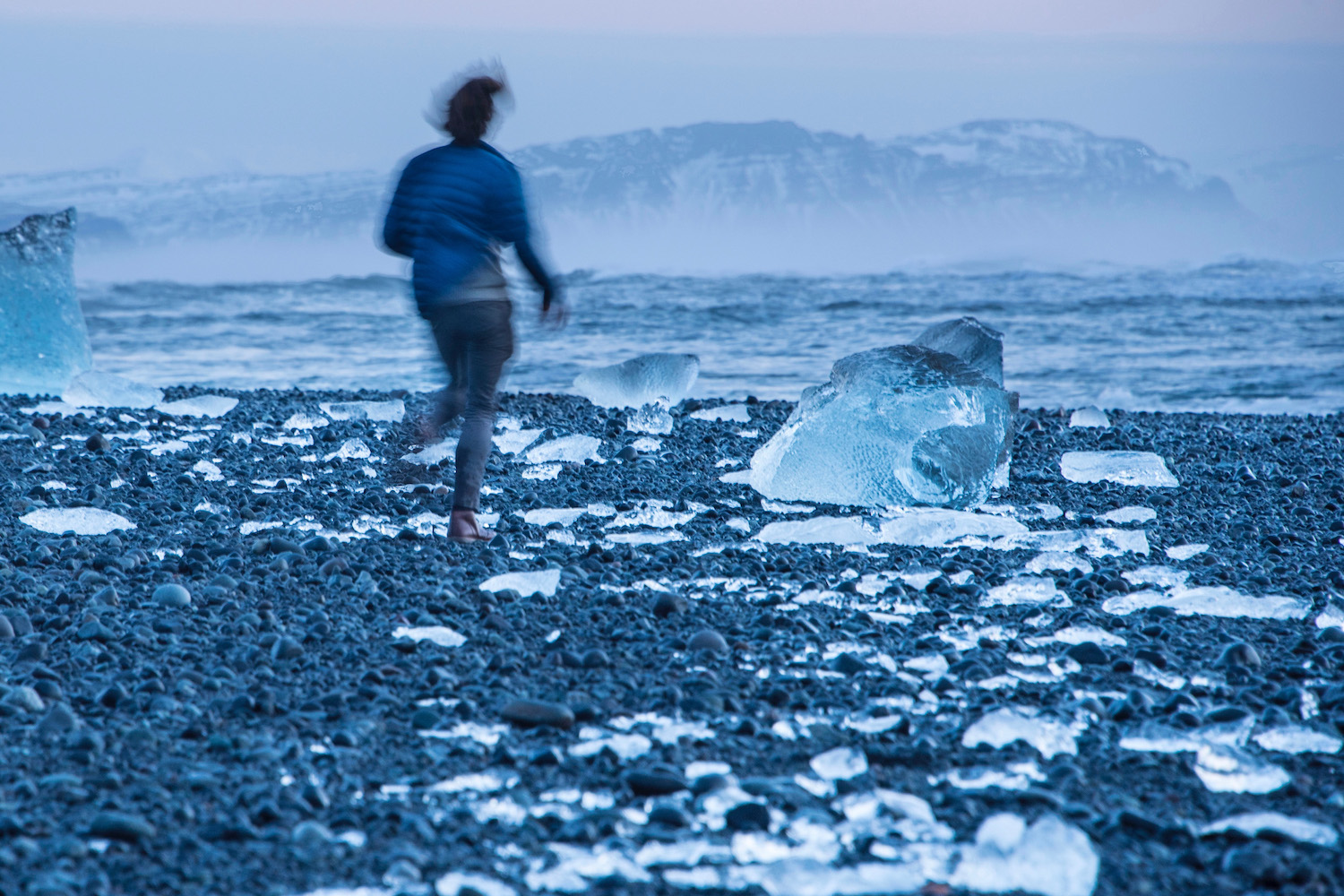 Where to Stay Near Diamond Beach Iceland

Outside of Vik itself (which is over two hours from Diamond Beach, although it looks close on the map), there aren’t a lot of excellent Iceland South Coast hotels. In fact, as is the case for much of rural Iceland, the majority of accommodations you find here are guesthouse and B&B type places, including Reynivellir and Hali Country Hotel, where I have personally stayed.

An alternative to Diamond Beach accommodation, if you don’t mind driving a couple of hours each way, would be to stay in Vik, where spots like Hotel Kría and Guesthouse Carina offer comfortable stays, if not completely chic ones. Keep in mind that if you visit in winter, staying here might preclude you from seeing the aurora (if cloudy skies don’t).

Other Things to Do Along Iceland’s South Coast

No matter when you visit Diamond Beach, summer or winter, Iceland’s South Coast is one of the most attraction-rich parts of the country. Apart from the Glacier Lagoon and the beach, most attractions are concentrated around the city of Vik (which, to be fair, is really as fair as most Iceland travelers get—especially those who don’t read this blog).

For instance, Reynisfjara (aka Black Beach Iceland) is only about 15 minutes before you reach Vik along Iceland’s ring road, and the nearby Dyrhólaey peninsula. On the other hand, Vik itself isn’t terribly impressive in my opinion, although the church that overlooks the town is very charming in summer, when a carpet of purple lupines surrounds it.

Other FAQ About Diamond Beach Iceland

How far is Diamond Beach from Reykjavik?

If you want to travel directly from Reykjavik to Diamond Beach, head east on the Highway 1 “Ring Road” for around 375 km, which should take you between 4-6 hours, depending upon how often you stop. However, I recommend stopping for more than a few minutes at a time. Specifically, it’s worth spending at least one night in the city of Vik along the South Coast, and potentially also at the Golden Circle just outside of Reykjavik. The journey from Vik to Diamond Beach is much shorter.

Is there a Diamond Beach?

While the Iceland Diamond Beach (obviously) doesn’t have diamonds on it, the piece of iceberg that wash up on it after flushing out of nearby Jökusárlon Glacier Lagoon definitely glitter like precious gemstones in the early morning sun. Just one look at this beach (whose black sand further enhances this effect), and you’ll instantly know how it got its name.

Can you visit the Diamond Beach in summer?

Diamond Beach Iceland is one of the most stunning places you’ll see during your trip, whether you dare to embark on a terrifying winter experience like I did or come in the height of summer’s tourist season. Make sure to time your visit to the beach according to whether you prefer a chance to see the Northern Lights or the Midnight Sun, and to be mindful of what you plan to do in the rest of Iceland as well. Don’t want to leave your Iceland road trip to chance? Hire me as your Travel Coach—and let me sweat the details!