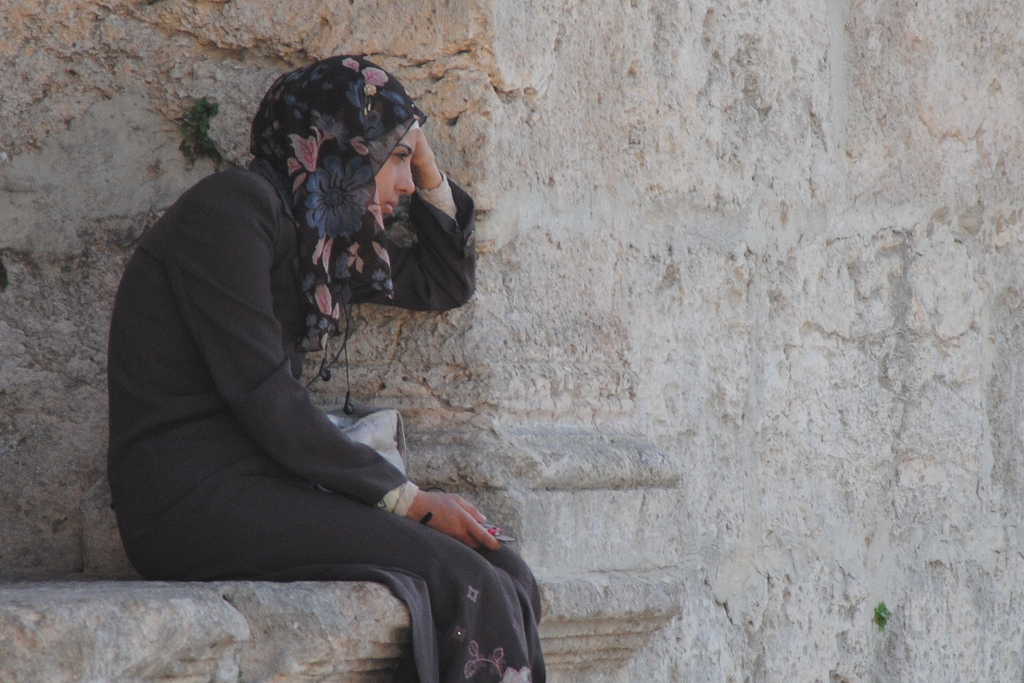 She coughed away from the mess of olive oil and chicken broth with which she’d lined the pan in front of her, but managed to ash directly into it the moment she pulled her freshly-wet round of flatbread away from it. Made to use both hands so the oversized pita wouldn’t tear as she transferred it to her sister, “Big” Najwa–as we call “Little” Najwa’s aunt and namesake–had only her mouth at her disposal to control what might happen to her cigarette in those five seconds.

I pointed toward it and began speaking.

She wiped the entire mess away with just one of her fingers and pressed the next piece of bread down into the liquid. “Don’t worry about it, pussycat.” I know from her voice, barely intelligible more for its smoker’s croak rather than the occasional, heavy Arabic accent that dominated her “r” sounds, that she’s not a bullshitter.

As she, her sister and her niece began assembling the many layers of Musakhan (Palestine’s national dish) in a semicircle in front of me, I hearkened back to the scene that played out Monday night when I returned from the less-than-holy land.

Like a grade school girl in her powder pink pajamas, big Najwa (alongside her other sister, little Najwa’s mother) reclined in the metal patio chair, the patio itself overlooking a garden so vast that I could see the longer branches of its farthest trees amid the pitch black, but no more of any particular arbor itself.

She puffed in and coughed out. “So now,” she said, “you have seen for yourself.”

Her sister weighed in. “I am sorry you had to go through that, but I’m glad you did. Now you know.”

Just then, a man about their age with a woman–presumably his wife–tagging alongside him traipsed across the marble floors of the house, their footsteps echoing from the moment they entered the garage, a good half-minute and hundred (or more) feet from where they were when I first noticed them.

He reached out his hand to shake mine. Naturally, I reciprocated, although I neither attempted to understand (let alone retain) his name, nor to be be terribly clear in giving him mine. This is not out of disrespect: indeed, of the majority of the people I’ve met over the past week and a half in Jordan–and there have been dozens–the only handful I’ve seen often enough to need to use their names again are the ones I see every day, familiar faces whose names I can double-check with little Najwa before I address them and embarrass myself.

He remembered anyway. “And how, Robert, have you been? I hear you’ve just returned from Palestine.”

To give a bit of background, allow me to emphasize how adamant all of Najwa’s family had been the first day I arrived that the country I’d planned to visit for four days during the middle of my stay in Jordan was called Palestine. They corrected me–each and every one of them–if I said Israel, each and every time. Even after coming back from the most wholly-terrorist state in the Middle East, the simple thought of this repeated chiding made me want to roll my eyes a bit. In any case, the man’s interest in hearing how, specifically, the time I spent on the other side of the valley had been wretched waned the moment I shut my mouth.

He opened his. “My hometown,” he said, “was very small. Only a few hundred people, but also only two kilometers from the neighbor town.” As is the case with Najwa’s mother, her sister and a great number of individuals with whom the family associates, this man had been made to leave Palestine in 1948 when the British Mandate of Palestine expired and “Israel” declared its independence.

“A few years ago,” he said, “I had two weeks of annual leave and decided that I wanted to go back home, to see what I had been missing for so many years. Let me tell you first off that twelve of those days were spent at the border crossing.”

Before I could ask for clarification–or pretend that I was truly any more compassionate than a spoiled American who hadn’t realized (neither at the time nor moments before) what a “Get Out of Jail Free” deal he’d gotten by have been made to wait just five hours–he went on. “And do you know what? They covered the road–it isn’t there anymore.”

“What happened to it?”

Just as big Najwa’s cancer-cheating rasp gives away to me that she knows what’s up, so too does the sight of a tear welling up in the corner of a seventy-year old man’s eye just before he says something. “They built a circular road, one that goes far out of the way from my town,” he said. “Over 100 kilometers.

“So,” he said, “when finally I arrived–and I barely arrived, thanks to immigration–I not only had to take in as much of my homeland as possible in two days, but had to spend so long getting from one place to another place that was once so close to it that I was already crying by the time I saw it, before I saw the Jewish family that was living there as if it had always belonged to them.”

Big Najwa entered our conversation. “But you see, Robert, he didn’t even try to enter. I had a friend who did and–God bless the gracious lately of the house–was able to take the new owner on a quick tour.” She began pointing a miming. This is where I prayed every night. This is where we ate dinner. This is where my Grandparents told us stories. The man’s pooling sadness began quite literally spilling out of him.

Big Najwa continued. “And they didn’t stop there–they even stole the Jordan River from us. Do you remember seeing any water when you crossed back into this country?”

As an American, the closest direct connection I can make between the aforementioned debacle (the massacre of my continent’s native peoples by early European settlers) doesn’t directly involve anyone in my lineage–or most people currently alive today, for that matter. I can’t, therefore, gauge exactly how important a long-lost but now-forbidden (and, largely, forgotten) birthplace might be at any point in time, let alone 60 years on, living a comfortable life that borders (by Western standards, anyway) on outright luxury.

As big Najwa added the last layer of pita to the first of two planned stacks, the soaked circles glued together with drastically caramelized onions, the kitchen in which we all sat larger than any apartment I’d ever lived in, I couldn’t help but wonder: how much of culture and tradition is synonymous with (and reinforces) willful self-deprivation as extrapolated solidarity with long-dead relatives unfettered by the conveniences on which are lives depend as we proselytize how important they were to the way we are today? Where do appreciation and reverence bleed into ancestor worship and leave us unable to chart (or even eye) the present and future and move on from who we used to be?

When little Najwa and I got home from a relaxing evening of refreshments and grape-flavored shisha at Amman’s cozy Books Cafe, I felt obliged to postpone my trip to the toilet (and my bed thereafter; the tobacco, a novelty for me, had robbed from my brain enough oxygen that it was no longer capable of thinking non-sleep thoughts), if only for the woman sitting at the end of the sofa–one of three I’d never met in the living room just then. Draped in an oversized green-and-white checked jacket with an almost-matching dark teal beret, she explained herself to me before I could forget her name.

After a bit of prodding on my part, I realized she was Roman Orthodox–which, apparently, is not the same thing as being Catholic. This clarification out of the way, she proceeded with the customary handshake.

“Rebecca.” Her appearance wasn’t particularly Arab either, although the same can be said for at least half the people I’ve met here in Jordan thus far. If it hadn’t been for the conversation she’d been having as I approached the proverbial huddle, I’d have assumed that she fled Rome at some point in the past and wound up here by chance–white girl names really throw me off, especially when the non-white girls who have them are so white otherwise. Thankfully, I would later find out Rebecca was actually “Rabeeha.”

She–and the rest of the crowd–went back to speaking in Arabic shortly after I arrived and had been greeted, a rather common (but understandable, as I’ve been the only Westerner) occurrence over the course of the past ten days.

Rabeeha broke the silence suddenly. “So I hear,” she said, “you are a writer.”

“Myself,” I said, “and my politics sometimes, but I don’t write to persuade anyway–I just write what I feel.”

Rebeeha took the reins back. “So you write about love?”

“I’d like to,” I said. “But I don’t feel I know very much about it right now. You know, I have a rich tapestry of experiences for my age and a lot of ideas I want to pursue in the future.”

Rebeeha’s announcement–that she wanted to recite a poem she’d acquired at some point in her long life–thundered above the nods and agreement that transpired after I proudly underestimated myself in front of the crowd. Her left eye was twitching something terrible, although this acted only to confirm to me only that she’d been living a great while.

My assurance that her life had been as full as it had been long came only as she was reciting the verse, a 99-cent Hallmark card of a proclamation only someone as certain about things as Rabeeha appeared could recite with enough conviction to convince me of its truth:

Love me little;
Love me long;
Love me tender;
Love me strong.
If you love me and I love you,
No knife can cut our love in two.

She used her cane to pull herself up off the couch. “Now, you can write about love. What else is there to know?”