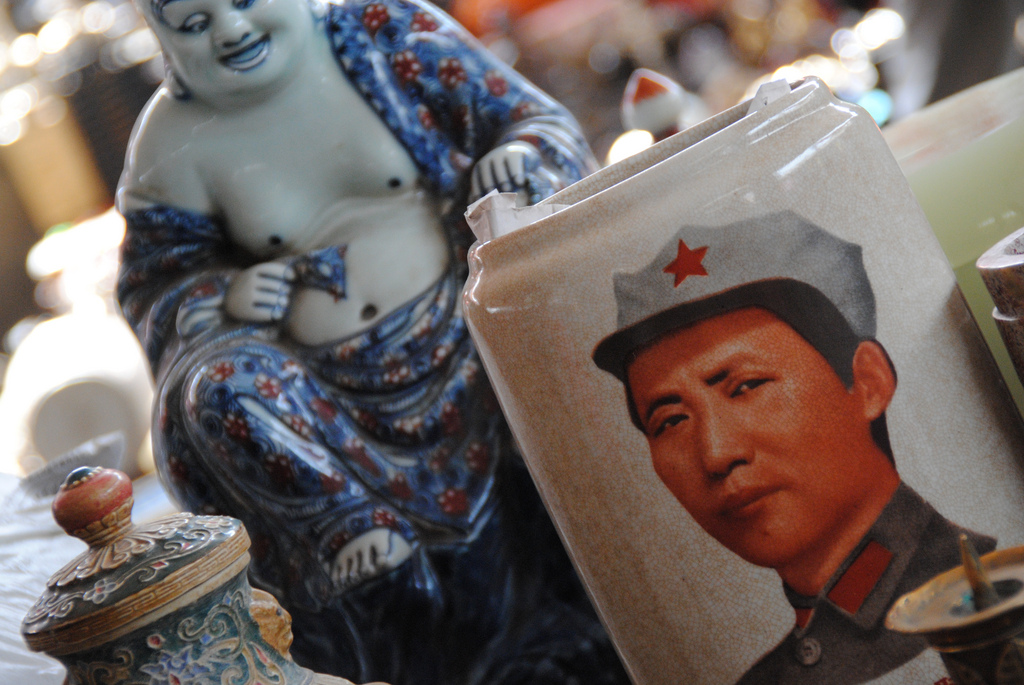 I applied to teach with English First China in August 2009. I’d actually been browsing jobs teaching English in Japan when I saw a sidebar ad that read “Teach English in China.” I clicked it and arrived at the EF China home page.

Unlike the majority of ESL job postings online, language school English First’s website was organized, informative and beautifully-designed. It explained in crystal-clear detail what I could expect from the application process, upon my acceptance as a teacher, after my arrival in China and on the job.

I didn’t hear anything for the first several days after submitting my application, but within 48 hours of EF’s response, I had a job offer and placement in Shanghai. I hope this isn’t too good to be true, I thought as I clicked the “Send” button.

As you can probably guess, it was indeed too good to be true. Although English First Shanghai is far from the worst place I’ve ever worked, little about the company separates it from any of its multinational competitors. Continue scrolling to read one of the most candid EF China reviews you’ll find online, or click here to read more about teaching English in Asia more generally.

Need help getting an ESL job that doesn’t suck? Hire me as your Travel Coach!
Contents
1  The Good
2  The Bad
3  The Ugly
3.1  EF China Work Environment
3.2  EF China Management
3.3  EF Professional Development
3.4  Technology at EF China
4  Alternatives to English First China
5  Canceling Your EF China Contract
6  FAQ About Teaching English at EF China
6.1  How much do English teachers make in China?
6.2  What qualifications do I need to teach English in China?
6.3  Is it safe to teach English in China?
7  The Bottom Line

I like to start with the positive whenever I can, so I’ll begin by telling you what was good about my experience teaching English in China with EF. Overall, English First’s strong suit is that it has money, which it uses to make sure teachers’ bare necessities are covered.

English First was always on-time direct depositing my salary into the Bank of China account the school set up on my behalf. By contrast, many smaller English school pay teachers late, or not at all. These school sometimes even cease operations without prior notice.

As promised, EF promptly reimbursed me for expenses I incurred during the application process, such as obtaining my online TEFL certification and Chinese “Z” work visa.

English First also facilitated the conversion of my work visa into a residence permit. The school provided me with a work permit, medical examination and a chaperoned transfer to the office where I had to submit my paperwork. EF paid all associated costs.

Furthermore, EF’s “welcome package” was excellent. My liaison Apple met me at Pudong Airport and escorted me to the four-star Rayfont Nanpu Shanghai Hotel, where EF had prepaid a two-week stay for me.

Before Apple left, she provided me all the materials I’d need to start with the company the following Monday, including instructions as to where to meet her colleague, who’d be taking myself and my future colleagues to orientation.

EF offered teachers a salary of 12,350 RMB (or about $1,850) per month as of November 2009. The EF English First salary is enough to live well in Shanghai or other large Chinese cities, but it isn’t enough to both save and spend. Allow me to explain.

First of all, China taxes expat employees in this income bracket at a rate of 20%. In other words, my take-home pay was only 9,880 yuan per month.

EF China also doesn’t reimburse you for your flight up-front.Rather, it pays you monthly installments of a set, 8,000 yuan ($1,200) employee transportation allowance that doesn’t come close to covering the actual cost of a round-trip ticket from anywhere in North America or Europe to China.

You might notice that I haven’t mentioned much about my work environment yet. You know what that means: It sucked.

As a disclaimer, I will say that I loved my students more than you can ever imagine. I taught adults, so many of my students became friends. They showed me parts of Shanghai and China I’d never have been able to see otherwise. For this alone, I am forever indebted.

That being said, EF is surely not the only English school in China with good students.

Unfortunately, EF is one of the worst managed places I’ve ever worked. I’m speaking about my work location in particular: The EF “Megacenter,” the company’s national headquarters in Shanghai’s People’s Square district.

Friends who worked in other English First centers throughout the city and country, teaching both kids and adults, had varying reactions to their workplaces. The vast majority of them were as disappointed as I was.

This was particularly true for kids’ teachers, who were unwittingly forced into working two six-week sets of seven-day work weeks during EF’s seasonal “Summercourse” and “Wintercourse” modules, without overtime pay or time off in lieu of worked weekends.

Several job-related irregularities irked me. First and foremost was the issue of “Feedback.”

About half of a given SMART teacher’s schedule is composed of four-person “Face-to-Face” classes.  The primary benefit students reap from taking these classes is individualized instructor “Feedback” within 72 hours of class completion.

Being the overachiever and generally good worker than I am, I made a point of entering feedback immediately after each Face-to-Face class. I got zero recognition for my promptness. By comparison, all but a couple of the other teachers were chronically late.

To add insult to injury, I was also made to stay in the office during unpaid “office hours,” even though I was finished with my work. Because of this, I ended up being “at work” approximately 50 hours per week, while getting paid for just 25.

My supervisor used his quarterly conferences mostly to remind me that he didn’t personally like me very much. The subject matter of these conferences only tangentially related to teaching or learning, and usually focused on matters of office gossip.

He also frequently criticized my wardrobe. This was curious, since I was the only male teacher in the office to adhere to EF’s dress code, which requires a belt, tie, dress slacks and a shirt tucked into them.

Hate sales? I don’t, but it got really fucking old have to put the EF logo on every piece of content I produced for my students, as well as having to use official product and course names whenever I mentioned any linguistic concept even nominally related to them.

Technology-wise the Megacenter was also lacking, a problem I imagine is much worse at English First satellite centers. Computers both at teacher desks and in classrooms were sluggish, resulting in regular delays in class starting time for which teachers usually took the blame.

EF’s main competitor in China is Wall Street English, a decidedly more corporate-oriented language school that have at least as many centers as EF nationwide, if not more.

Wall Street English has a reputation of working its employees even harder than English First (34 classroom hours per week vs. 25), but also pays significantly better, in addition to a rent-and-bills stipend each month. Like EF, Wall Street is a multinational company, so it’s conceivable you could take your job to another country if you make it long enough.

Once I’d finished with English First, however, I had no desire to work directly for someone again. By virtue of my friend Kyle, who worked for British Education Ltd. at the time, I was able to procure several high school-aged students as private clients, eventually making as much per month as I’d made with EF working only half the time.

Teaching private English lessons is ideal if you’re experienced enough that you don’t have a problem making lesson plans from scratch. It’s also important that you be OK with working under the table, since you might not have your residence permit any longer.

If you’re unhappy working English First language schools, you’re probably worried about being “under contract.”  First thing’s first: The only thing you need to do to get out of your EF contract fair and square is to provide your supervisor written notice at least 30 days before your last planned day of work. End of story.

But what about my residence permit? What about it? Although company drones will tell you otherwise, you are under no obligation to allow EF English First to cancel your residence permit, regardless of whether or not they paid for it as they did mine.

Thanks to the China’s Stone Age information technology infrastructure, Chinese authorities are unable to cancel any entry document without physically having it in their possession. To be sure, Chinese immigration officers are usually too busy with other issues to bother tracking down teachers who quit their jobs a few monthly early.

Although your residence permit will eventually expire, you can remain in China if you so please, whether or not you procure other teaching jobs in China. Simply obtain a Chinese tourist visa in Hong Kong.

How much do English teachers make in China?

English teachers in China generally make between 10,000-20,000 RMB per month, or about 1,400-2,800 USD. As you’ll see reading through mine and other English First reviews, EF China sits near the lower end of this spectrum.

What qualifications do I need to teach English in China?

To teach English in China, you need to be a native English speaker from one of a handful of countries (US, Canada, UK, Ireland, Australia or New Zealand) and have a college or university degree in any subject. Mine and other EF China reviews you find online explain certain other qualifications that English First seeks.

Is it safe to teach English in China?

English teachers in China are safe from violent crime, compared to their home countries. On the other hand, life in China can be dangerous in many other ways, from food-borne pathogens to viral pandemics, and from treacherous road conditions to long-term illnesses caused by environmental pollution. To say nothing of the emotional issues evident when you read English First China reviews!

Is English first legit? EF China isn’t the worst place in the world to work, but it has a lot of downsides—if, like me, you don’t have a specific exit strategy, you should get one stat. After you’re out of EF’s grip, Shanghai (or wherever in China you’re based) is your oyster—ample opportunities are available both within and outside the ESL industry, as many other English First China reviews will corroborate. Or, if you’ve managed to save money, you can get on the next plane out and never come back.