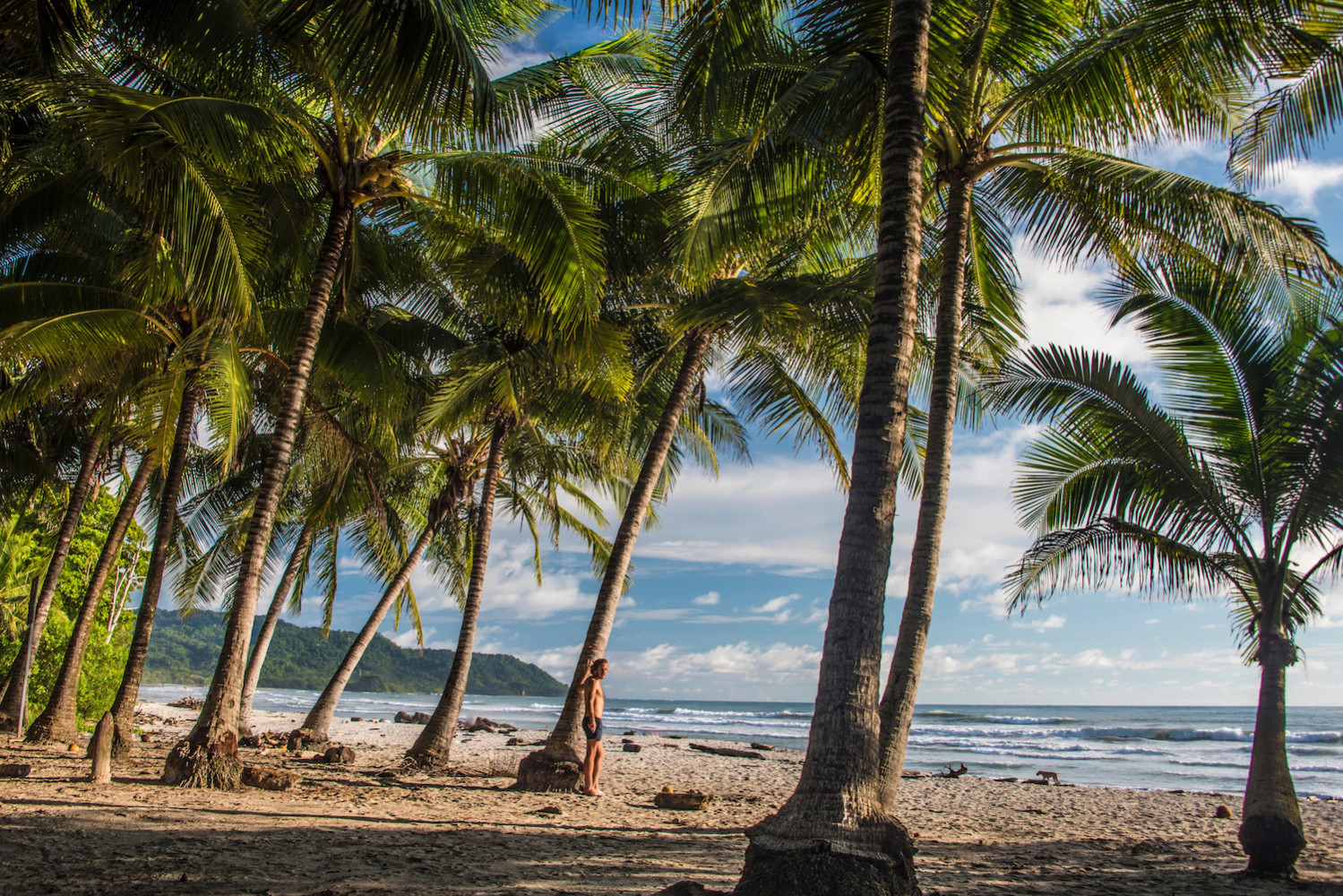 “The left one,” my travel companion said as we arrived at a particularly dramatic fork in the road. “Both Google Maps and Waze say it’s correct.”

My gut—and the smooth, contiguous asphalt of the right fork, which glistened like onyx under newly-installed overhead lighting—told me I was making a mistake. Next time, I’m going to listen to it.

To be sure, neither of the tech giants could help us mere minutes after we attempted to take the left fork, a muddy canal carved through rocky farmland, inhospitable in equal parts due to its steep grade and lack of cell signal. We had to walk at least a half a mile to call for help(there was still no cellular data) once our Hyundai Accent became stuck, a call that went unanswered for the better part of two hours.

The good news is that four officers (note to American cops: This is an example of how to “serve and protect”) from the local police department eventually arrived to escort us back to the road we should’ve taken in the first place.

The bad news? We weren’t in some uncharted jungle or labyrinthine cave or third-world mountain village. We were in Costa Rica, i.e. the place where people who never go anywhere exciting go to feel like intrepid explorers. It was my first full day in fucking Costa Rica—and I felt absolutely beaten by it. 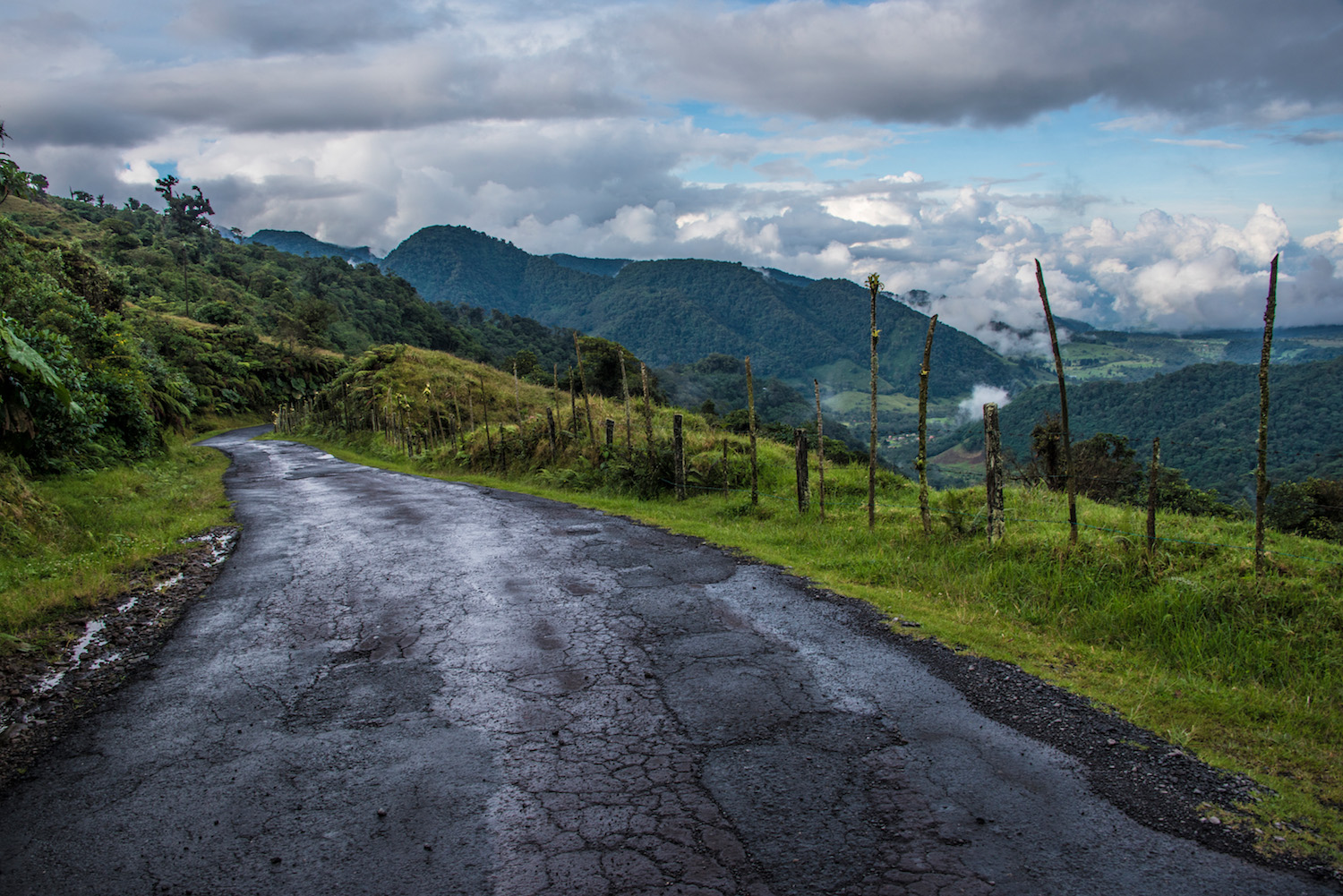 Before I continue with this article, I need to give credit where credit is due. Costa Rica is a beautiful country. The people are warm-hearted, welcoming and conscientious to a degree that eclipses basically any other country in Latin America, maybe all of them combined.

This article is not so much an indictment of Costa Rica or Costa Ricans as it is of my failure to properly ascertain the challenges of traveling there.

I assumed Costa Rica would be an easy destination. As I mentioned in the introduction, Costa Rica is where the least adventurous of my countrymen and women go when they get a wild hair. They come back feeling like Indiana Jones, but without a single scratch on their perfectly tanned (well, in most cases, orange) bodies. They’ve got a million amazing pictures, even if many of them are photos of postcards they snapped exiting their guided tours of twice-reinforced rainforest canopies.

Costa Rica makes tourists feel like travelers, so I boarded my plane to San Jose two weeks ago with no intent of thinking about what I would do there until the moment I arrived.

I won’t go into the specific reasons for my visit now, other than to say I spent the entire trip with an actual Costa Rican person, a fact I assumed would make this easy destination even easier, to say nothing of my decision to skip the tourist buses, all-inclusive resorts and package tours for a rental car and the Booking.com app.

Renting a car, it turns out, was among my chief mistakes in Costa Rica, emphasis on the word “car.” While many of the country’s main roads are of a modern standard, the vast majority of roads that lead even slightly off the beaten path are incredibly beaten in the own right, and completely hostile to a Hyundai Accent (or similar).

My travel companion and I would likely be dead right now were it not for my adaptable driving skills—You drive like a tico, he would frequently laugh, “tico” being an endearing term by which Costa Ricans refer to themselves. 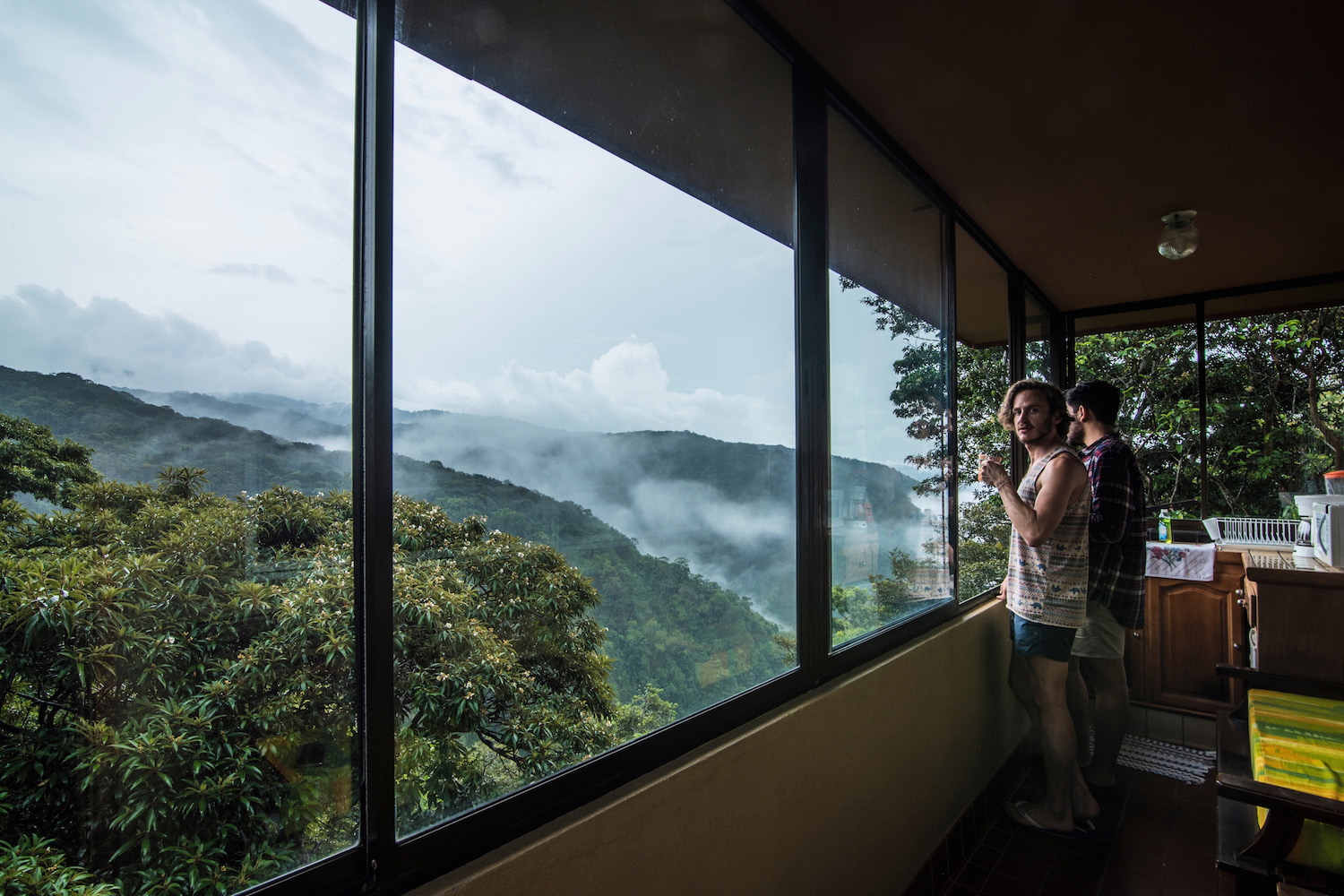 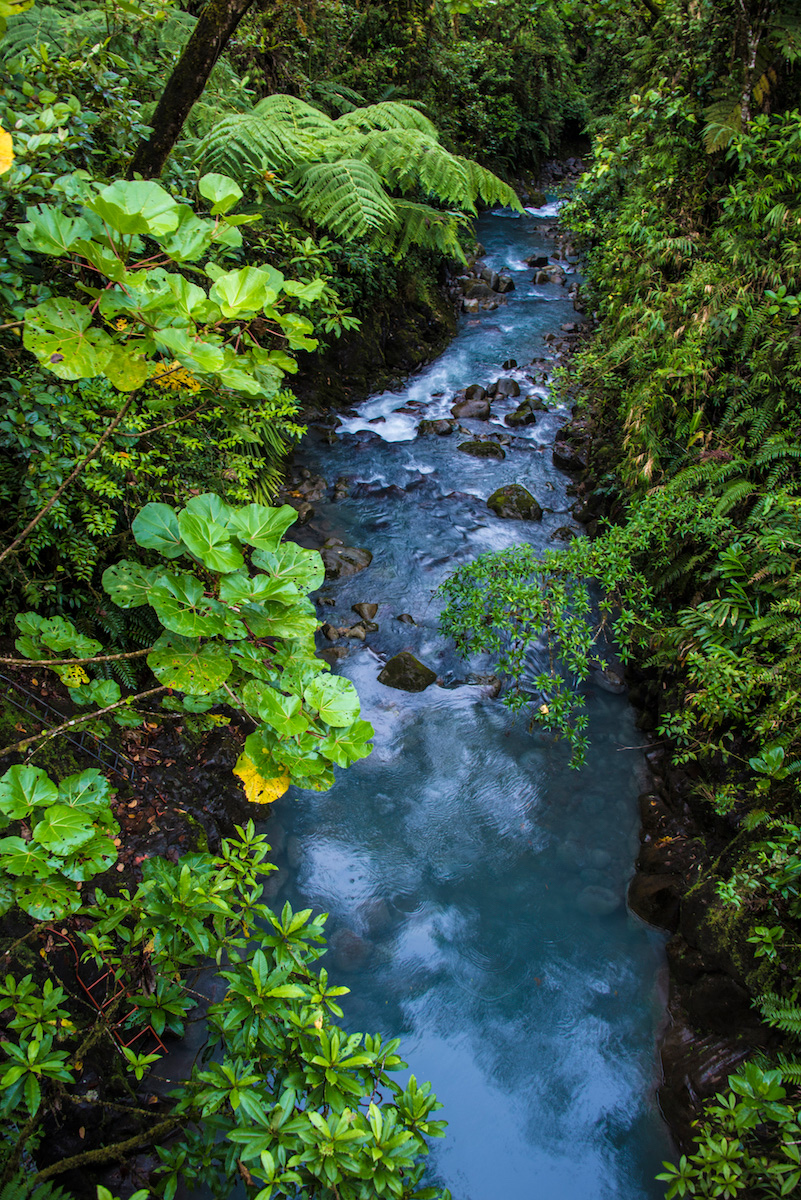 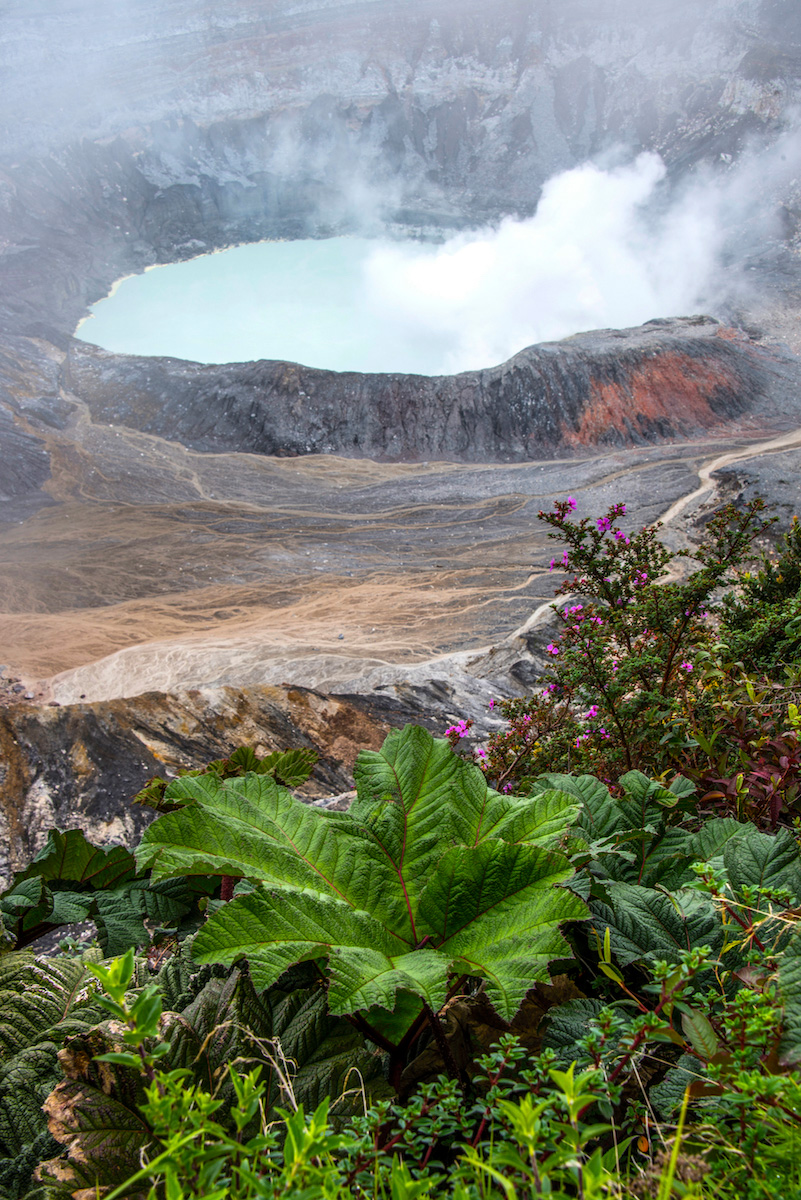 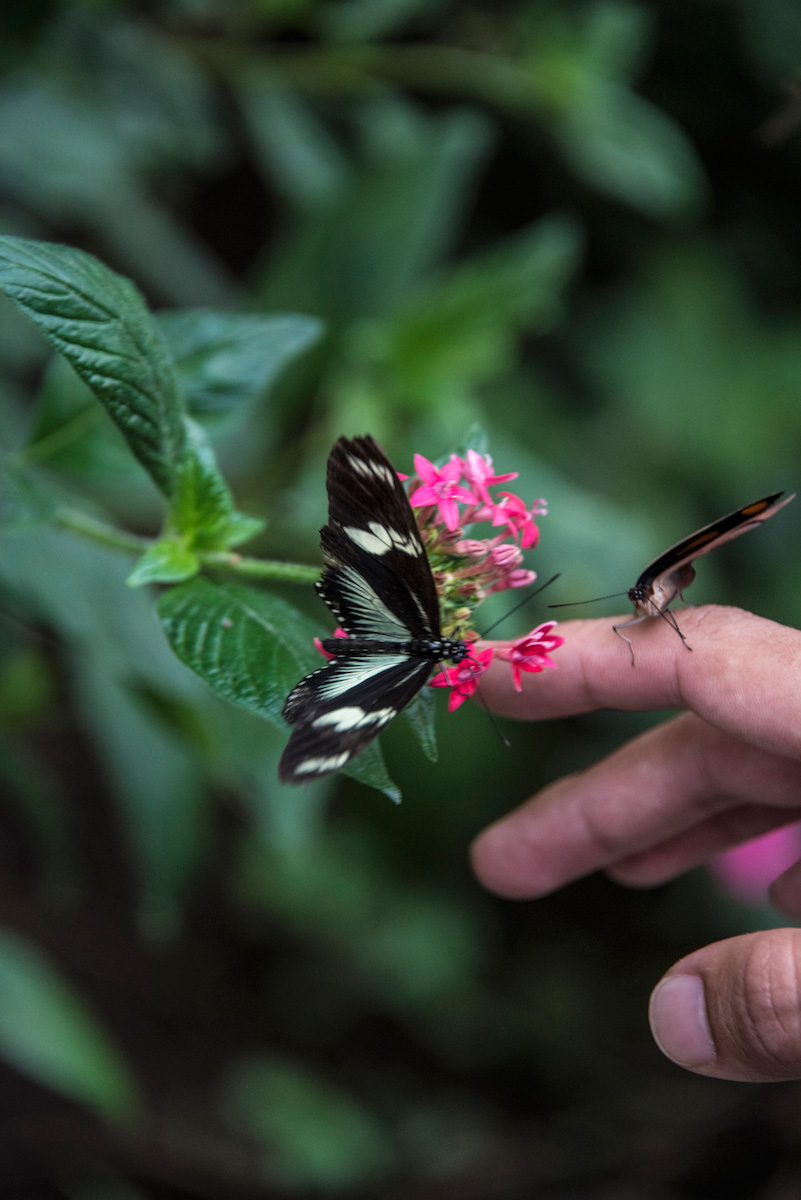 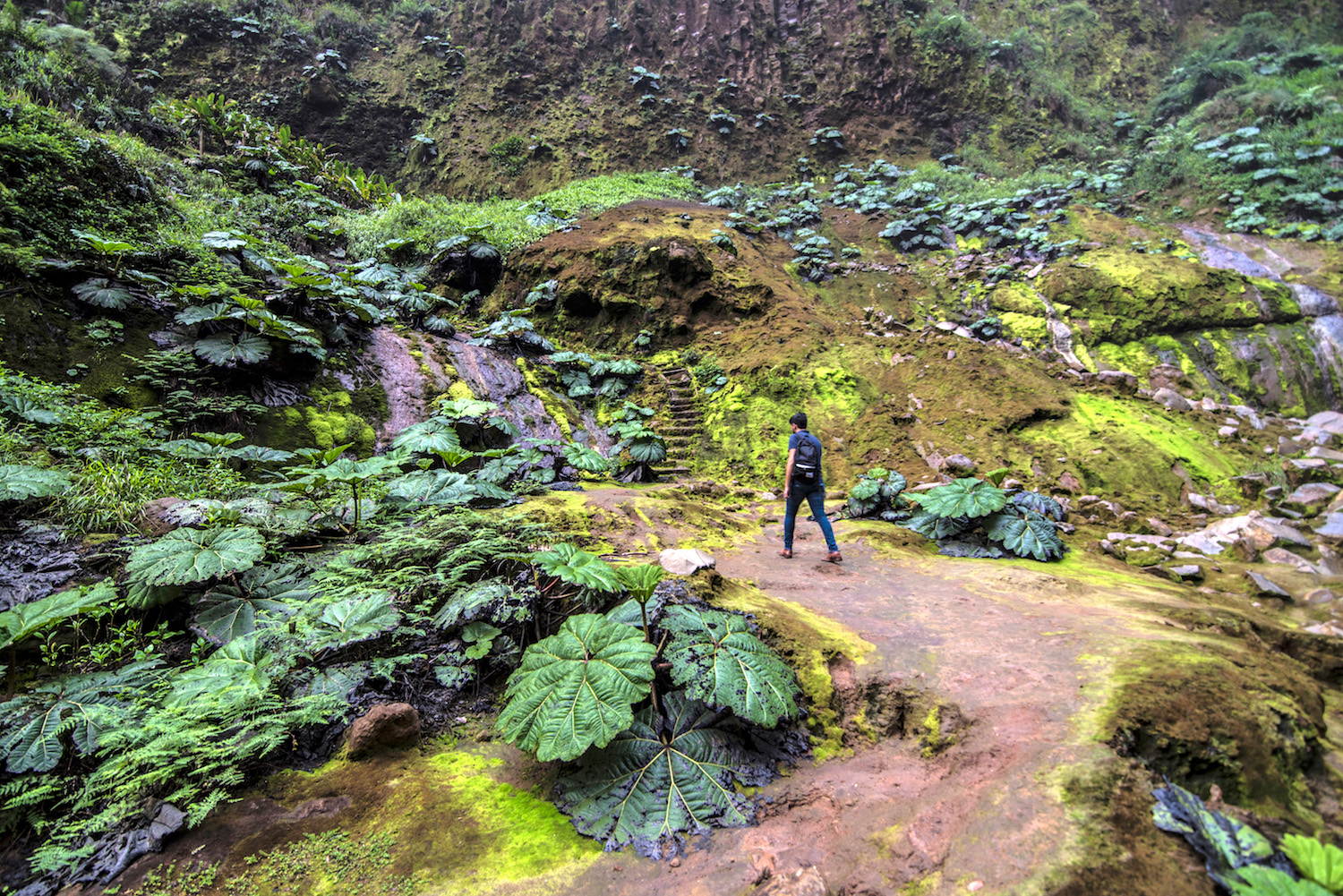 Costa Ricans put mayonnaise (or condiments made with mayonnaise, such as ranch dressing) on everything: Beans; rice; plantains; tacos; even pizza. Now in my mind, mayo is never necessary—I would quite literally prefer death to a spoonful of it in my mouth—but Costa Ricans take it to a level that eclipses even the Dutch and the Japanese. Absolutely sickening!

Let’s unpack what I said: Mayo is never necessary. While some of the more adventurous varieties might add a spritz of flavor, the ultimate “purpose” of mayonnaise is to add moisture and elasticity. It’s almost Orwellian in its design and application: A last-ditch effort to save food that’s nearly unsalvageable by dousing it in something barely fit for human consumption.

Indeed, the only thing mayo does in the long term is remove the responsibility of chefs and processed food manufacturers to create enjoyable—hell, edible!—food in the first place, thereby forcing undiscriminating diners to slather a thin film of heart attack onto their sandwiches (and, in Costa Rica, their grains, vegetables and snack foods).

As it turns out, mayonnaise (and Costa Ricans’ liberal and totally superfluous application of it to their otherwise incredible cuisine) is a fitting metaphor for how I feel about Costa Rica overall.

Costa Rican cuisine is incredible, and so are the country’s landscapes and many of its small towns; chaotic San Jose even has its moments. But rather than invest even a portion of its millions of dollars of tourism revenue in infrastructure or facilities that would allows travelers, foreign or domestic, to more easily explore its riches on their own, the Costa Rican government seems content to slather on more proverbial mayonnaise, i.e. monopolistic tour companies that work closely with all-inclusive resorts, sterilized jungle “adventures” and other interests as deeply entrenched in the country’s DNA as sloths, parrots and jaguars—I saw none of these traveling independently, FWIW.

It doesn’t hurt my argument that many of the aforementioned non-adventurous adventurists who frequent Costa Rica also happen to belong to mayo’s core constituencies: Condo-dwelling NPR listeners who spice up their children’s gluten-free lunches with dabs of organic aioli; and conservative, Southern survivors of the Great Depression (and their descendants), for whom banana-mayonnaise sandwiches are the equivalent of tiramisu.

Costa Rica’s national mantra is “Pura Vida,” but when I think of the country, the first phrase that comes to mind is “Pura Mayonesa.” 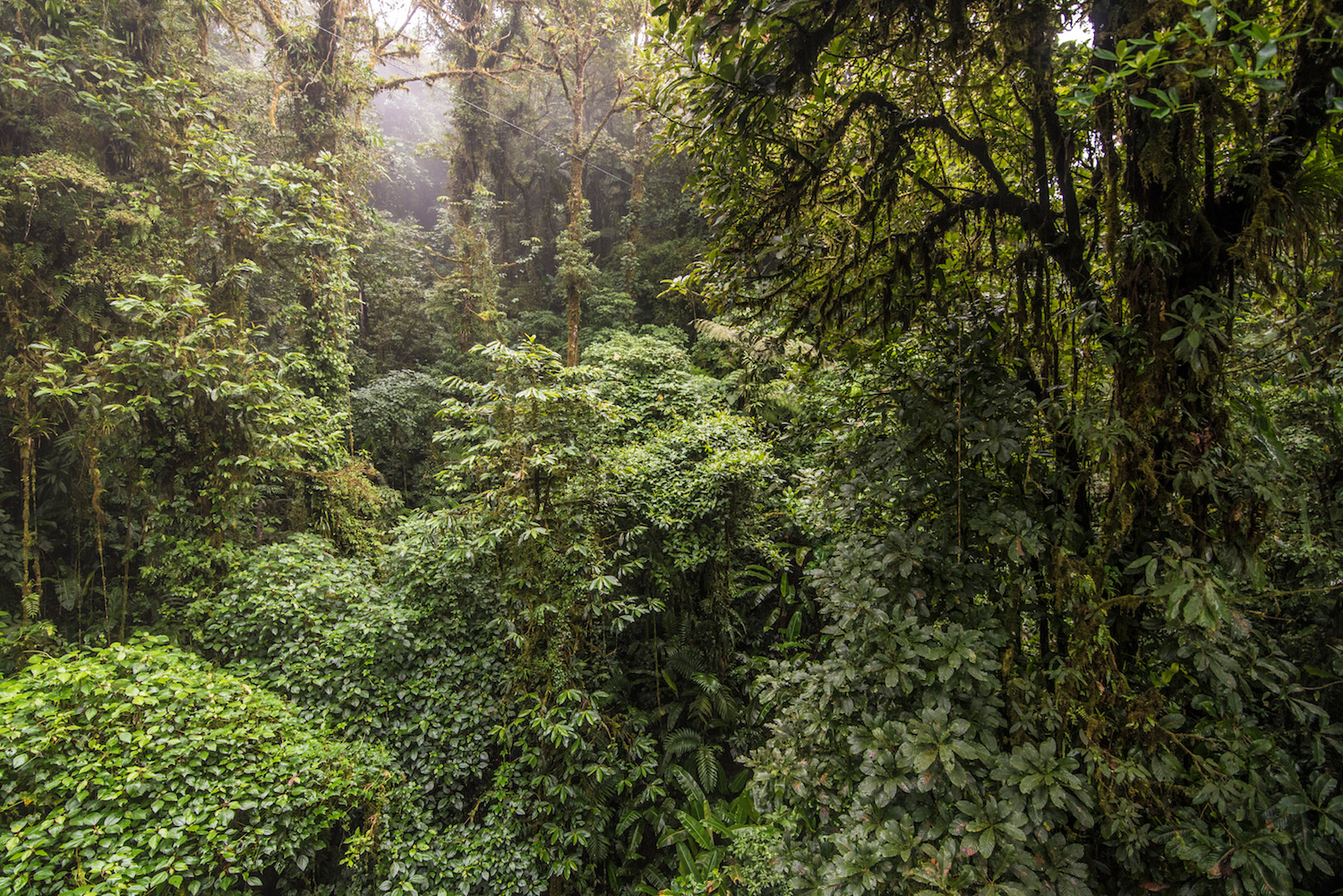 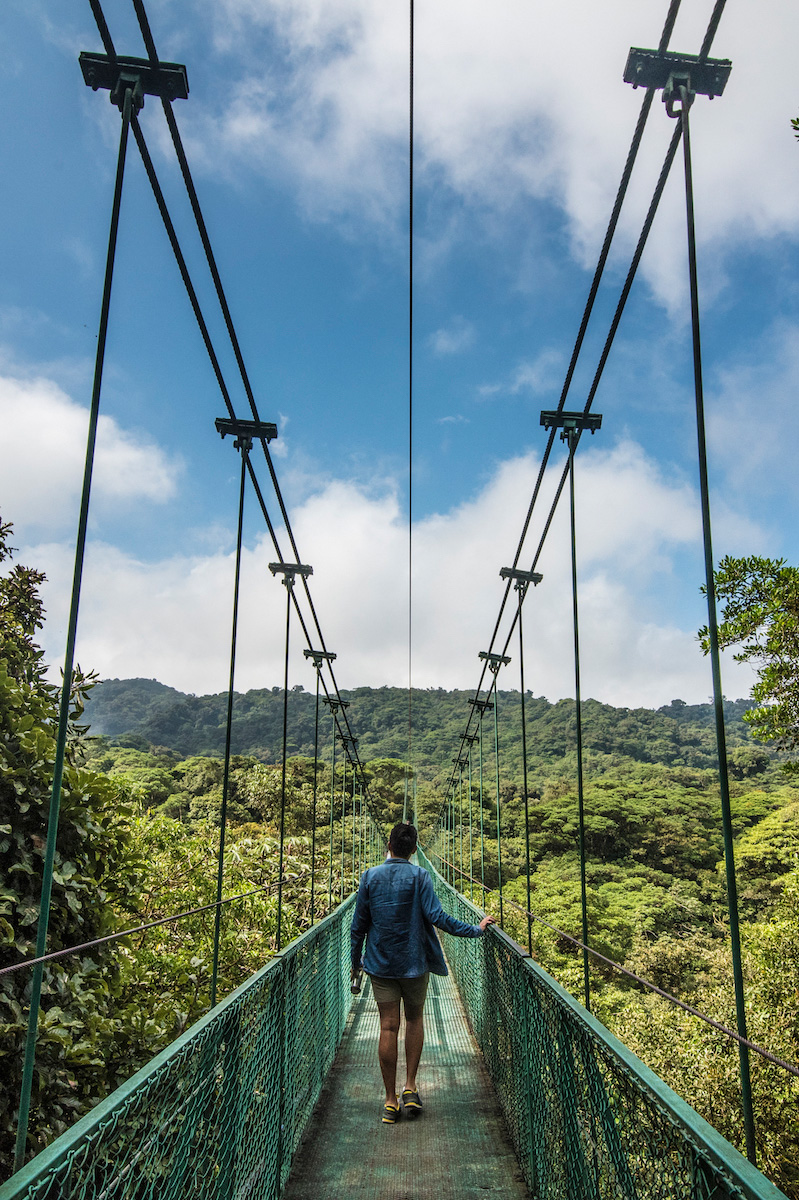 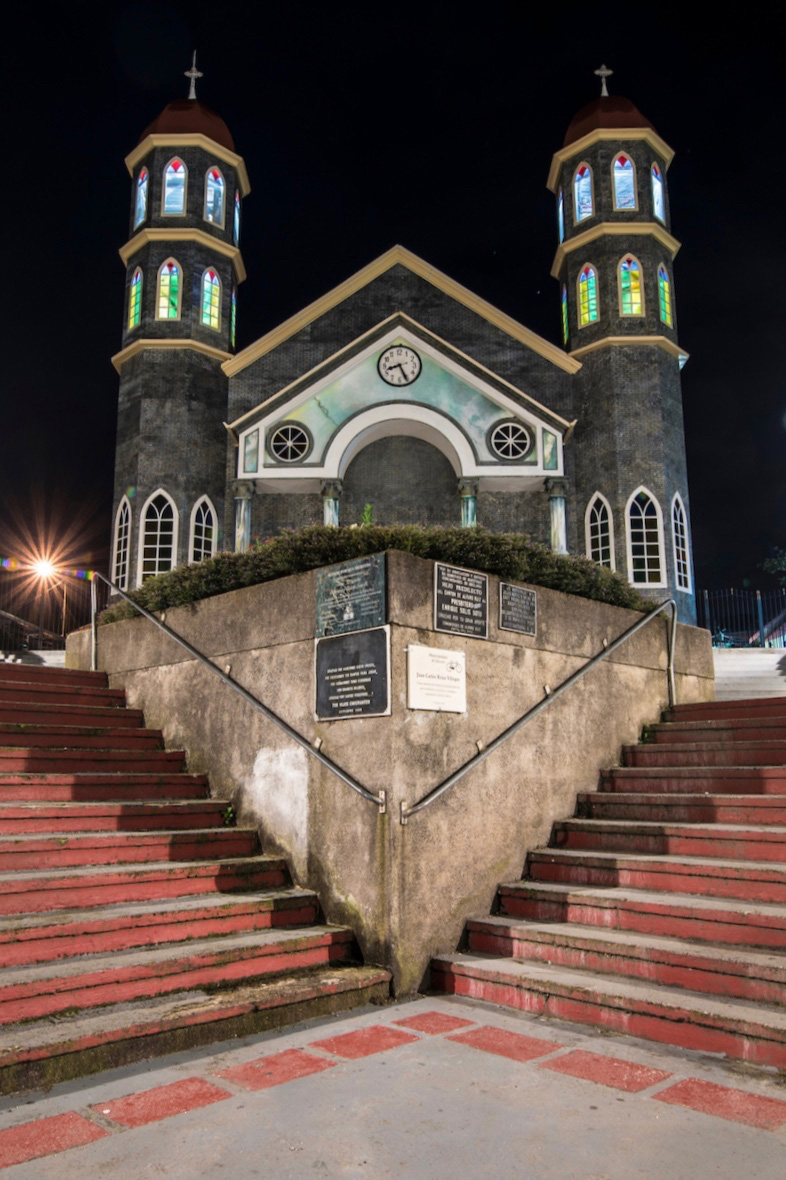 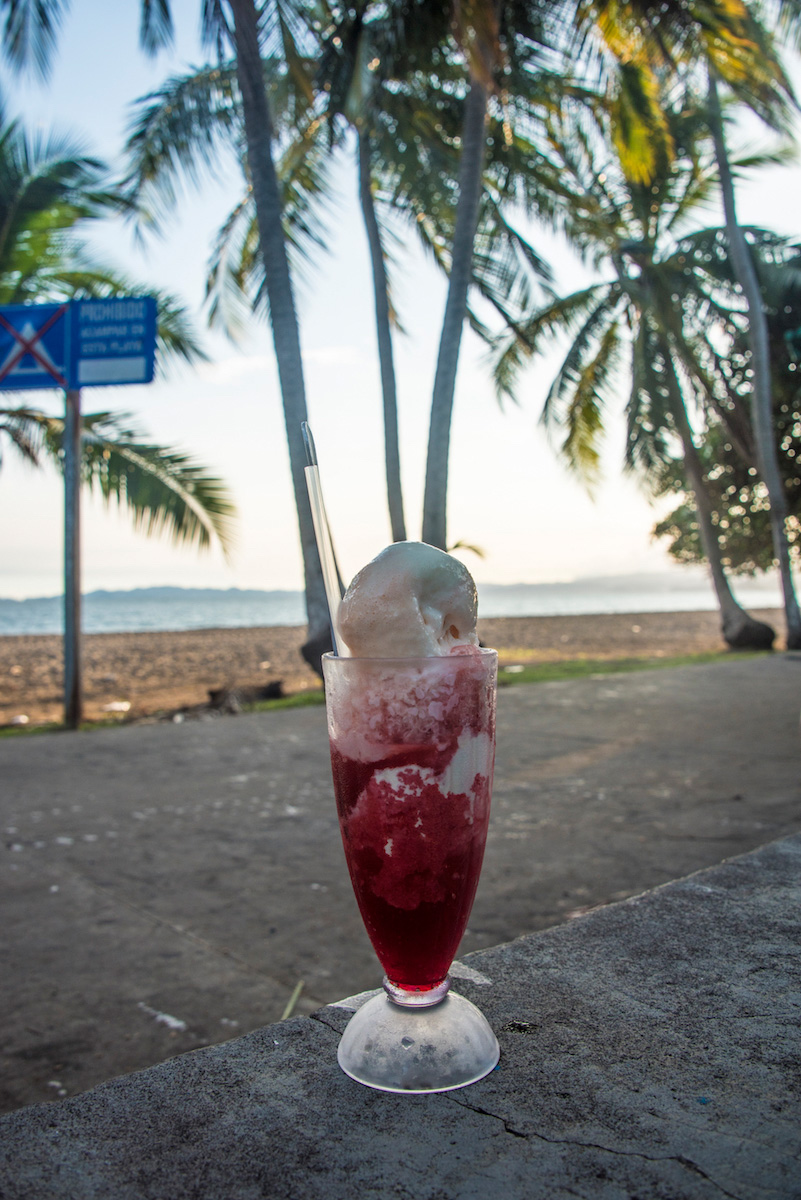 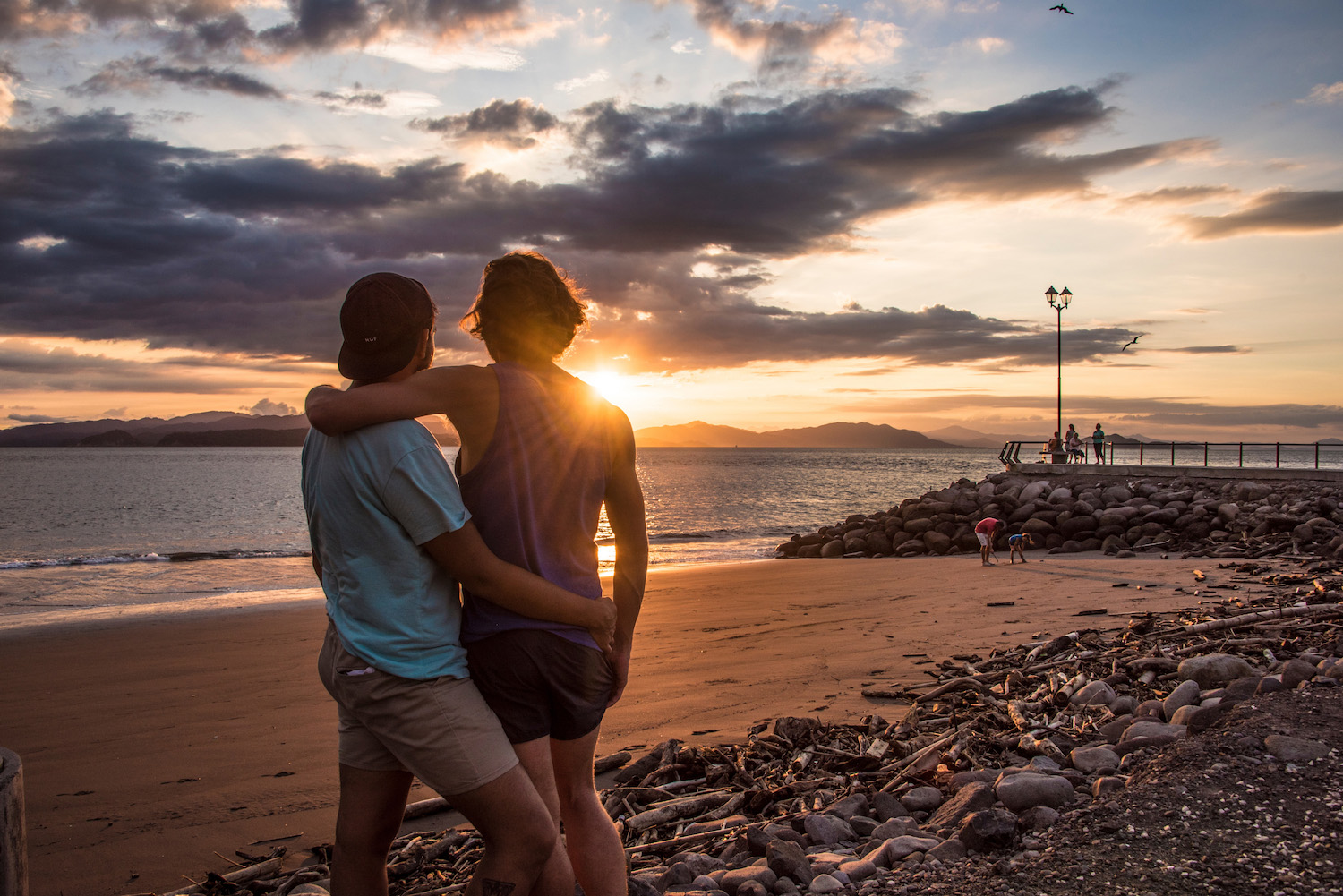 I’m being irreverent to a cruel extent and that’s not fair. Costa Rica, as I echoed earlier in this piece, is a beautiful country, from the idyllic (if bro-infested) shores of Guanacaste, to the mysterious vistas of the Monteverde Cloud Forest, to the prehistoric landscapes that carpet the trail leading to Bajos del Toro waterfall, where I was attempting to return from when I encountered the dramatic dilemma with which I started this post. Costa Rica is a beautiful country and I say that having barely scratched its surface, which is much larger and more complex than its 20,000 square-mile footprint—and the types of travelers who most often visit it—might have you believe.

Costa Ricans are wonderful people, from the four police officers who saved my travel companion and I from anonymous deaths on a forlorn farm road, to said travel companion and his out-of-this-world kind, awesome, welcoming family, to basically everyone I met in the country who wasn’t a putty-faced American desk jockey or an Argentine surfer bro trying to charge me $12 for a shitty frozen margarita or bowl of half-assed ceviche.

Although I hope my words make you laugh and think, and I’m sure they’ll draw ire and even venom and possibly even hatred from some of you, I ultimately hope my photos speak louder than them.  The last bit of my frustration with my maiden voyage to Costa Rica still lingers with me like the memory of the mayonnaise so pointlessly spread over the steaming plate of casado I ordered for my very first lunch there, but Costa Rica is a country that’s very much worth visiting, even if you’re not one of the sorts of tourists self-proclaimed “travelers” like me associate with the country—perhaps especially so.

Costa Rica is worth visiting, and it’s worth returning to: I plan to go back again January, and I’ll report my findings then.

For now, please remember: Only you can prevent mayonnaise.