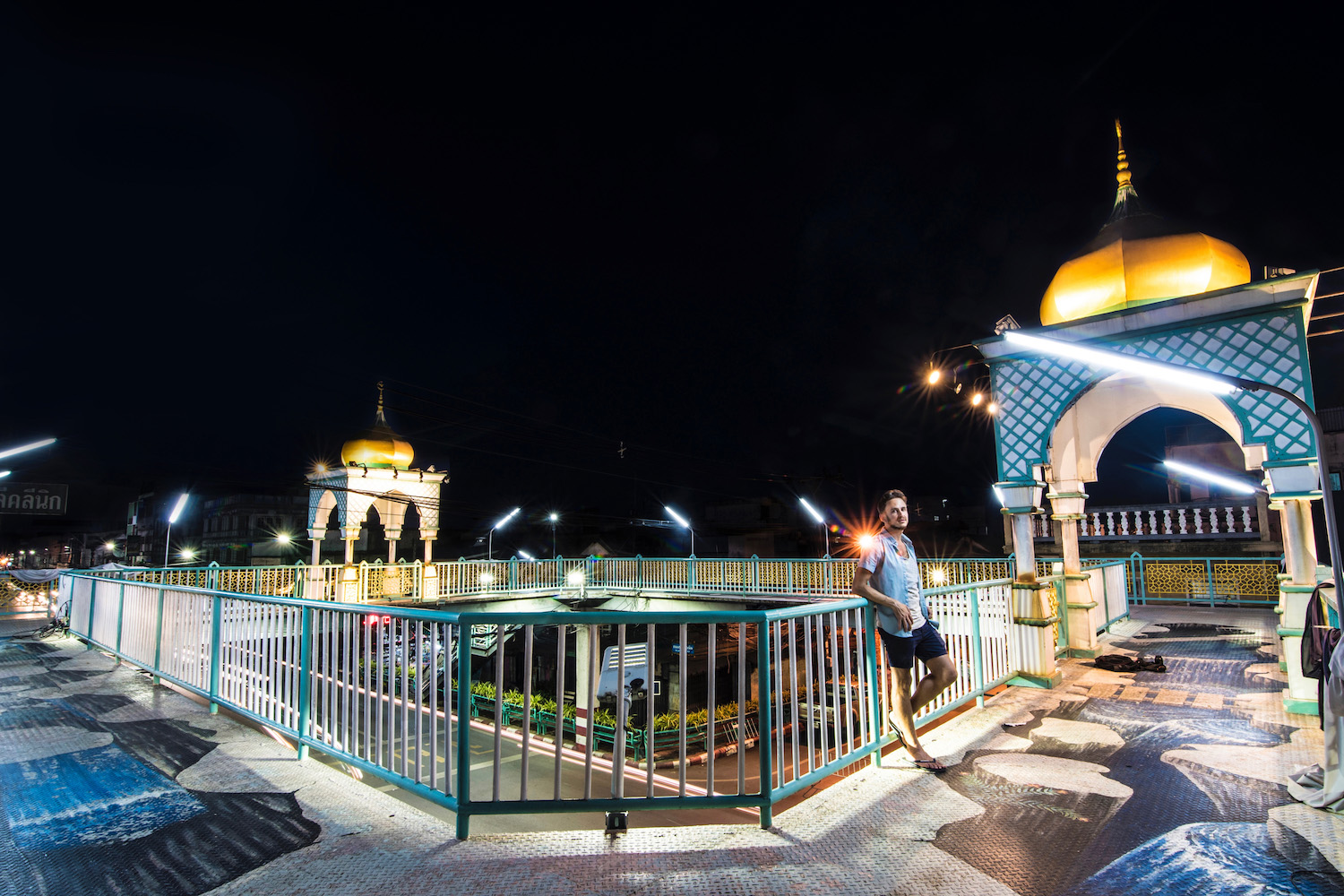 Before I began searching for things to do in Nakhon Si Thammarat, my queries were of a more generic sort.

My original plan had been to split that particular between Narathiwat and Pattani, two Muslim-majority provinces along the Kingdom’s border with Malaysia. However, it aroused reactions of terror and worry in my local friends. I assumed this was Islamophobia, but further research suggested otherwise: Sectarian violence in deep southern Thailand has intensified in recent years.

Dejected, I turned to my old friend Google. Most authentic place in southern Thailand, I typed, then hit the “Enter” key.

I anticipated a long and messy search, but the first sentence of the first page I clicked bore the only three words I needed to read: “Unadulterated Southern Thailand.”

Nakhon Si Thammarat it is, I let out of a sigh of relief, then opened a new tab and booked my ticket right then and there.

Where to Stay in Nakhon Si Thammarat

Nothing says “authentically Thai” like someone who’s so late you wonder if they’re coming at all. To be sure, by the time the man who owns Tree Home Plus in Nakhon Si Thammarat’s city center called me to let me know he’d arrived at the airport, the taxi I’d hailed in his absence was pulling up to the boutique hotel. (TIP: One of the things to do in Nakhon Si Thammarat you should definitely plan to do is being patient!)

In spite of this questionable first impression, Tree Home struck a perfect balance between laid-back and luxurious, and managed to be stylish and slightly ramshackle (there were ants in the room, but only a few) at the same time. Most importantly, it made a great base for exploring Nakhon Si Thammarat province in all its unadulterated glory. 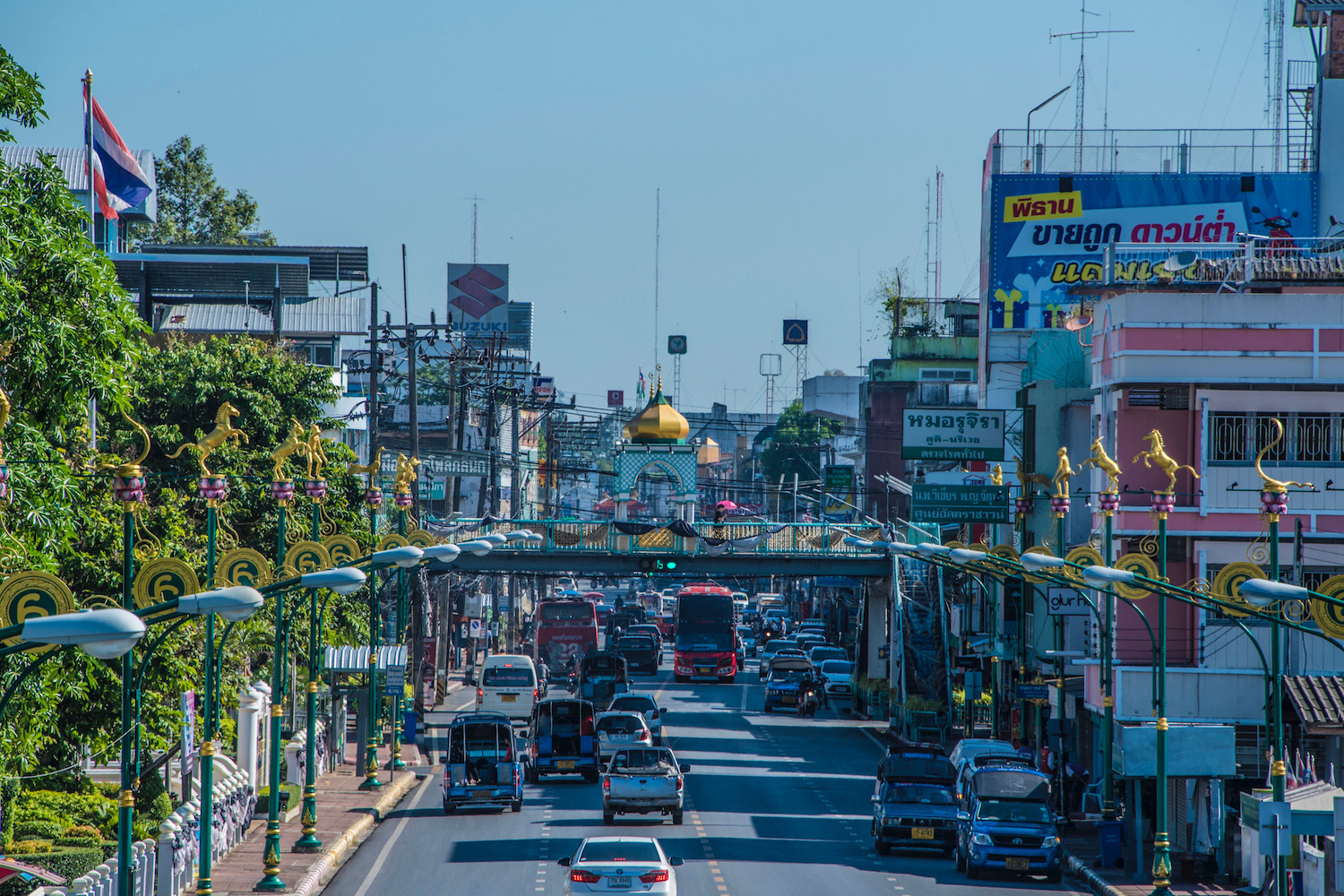 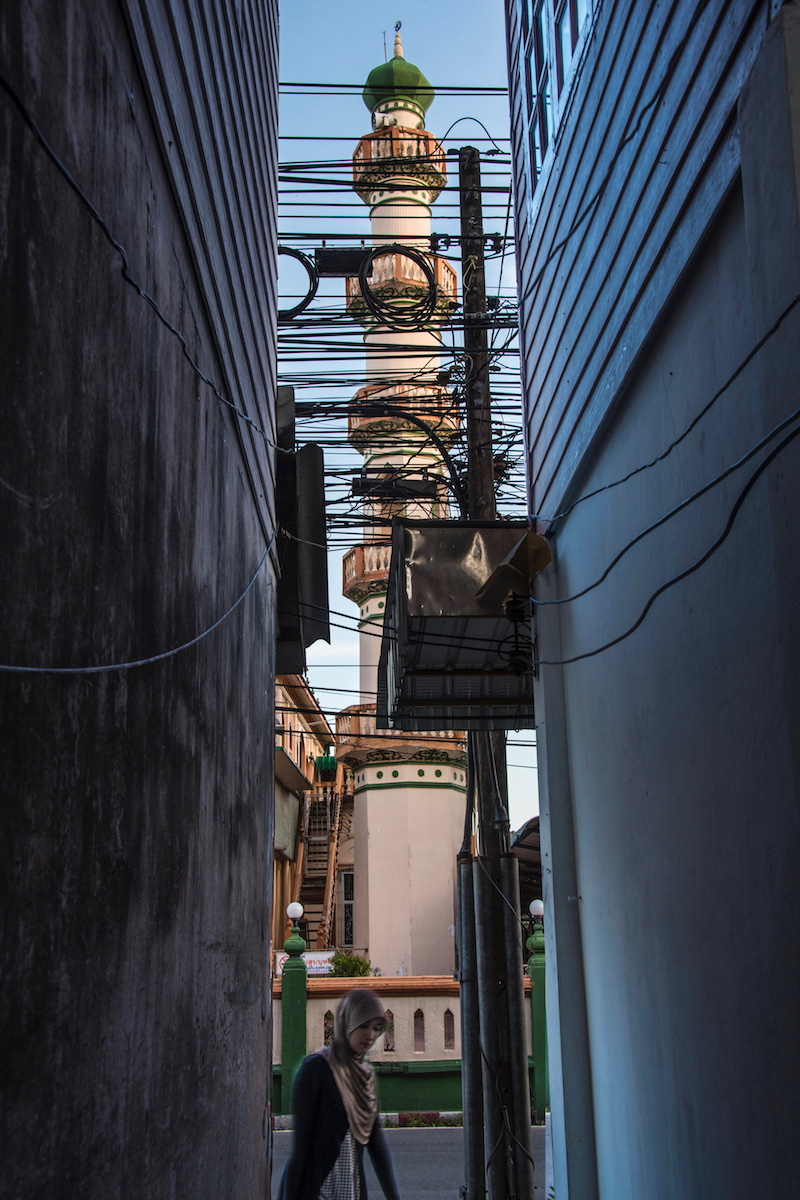 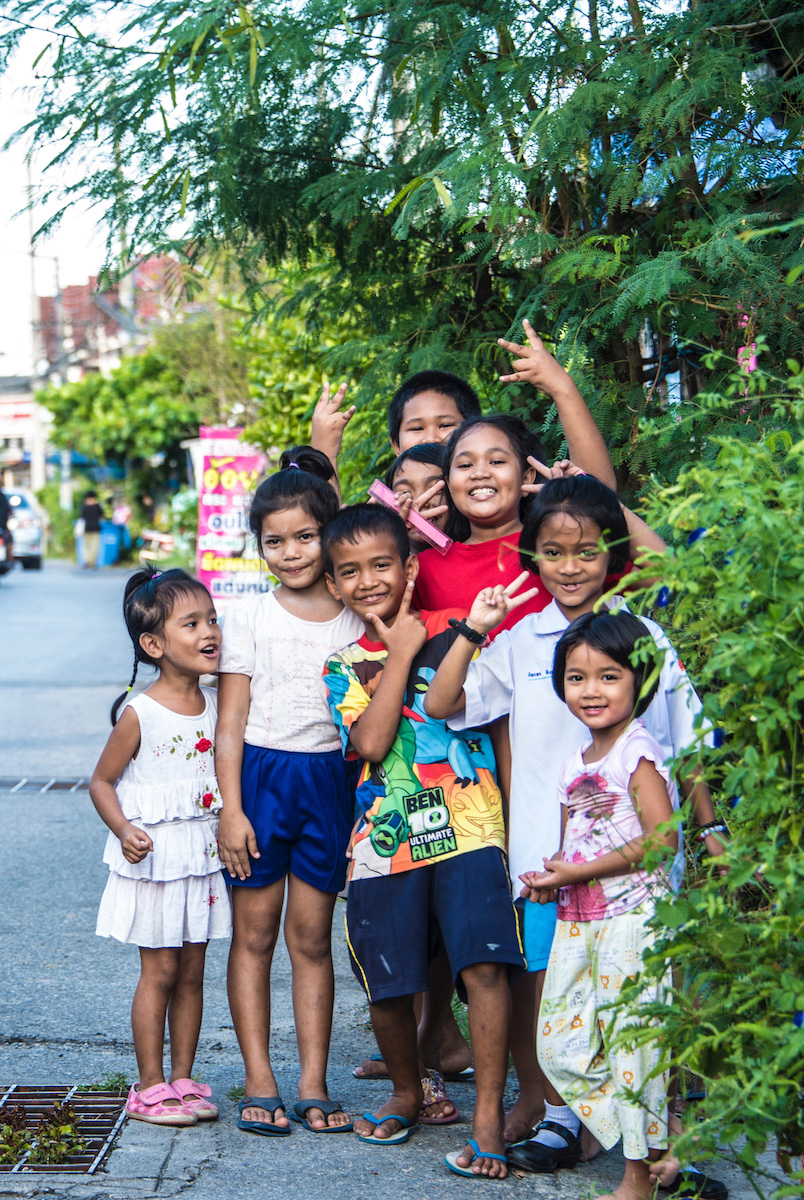 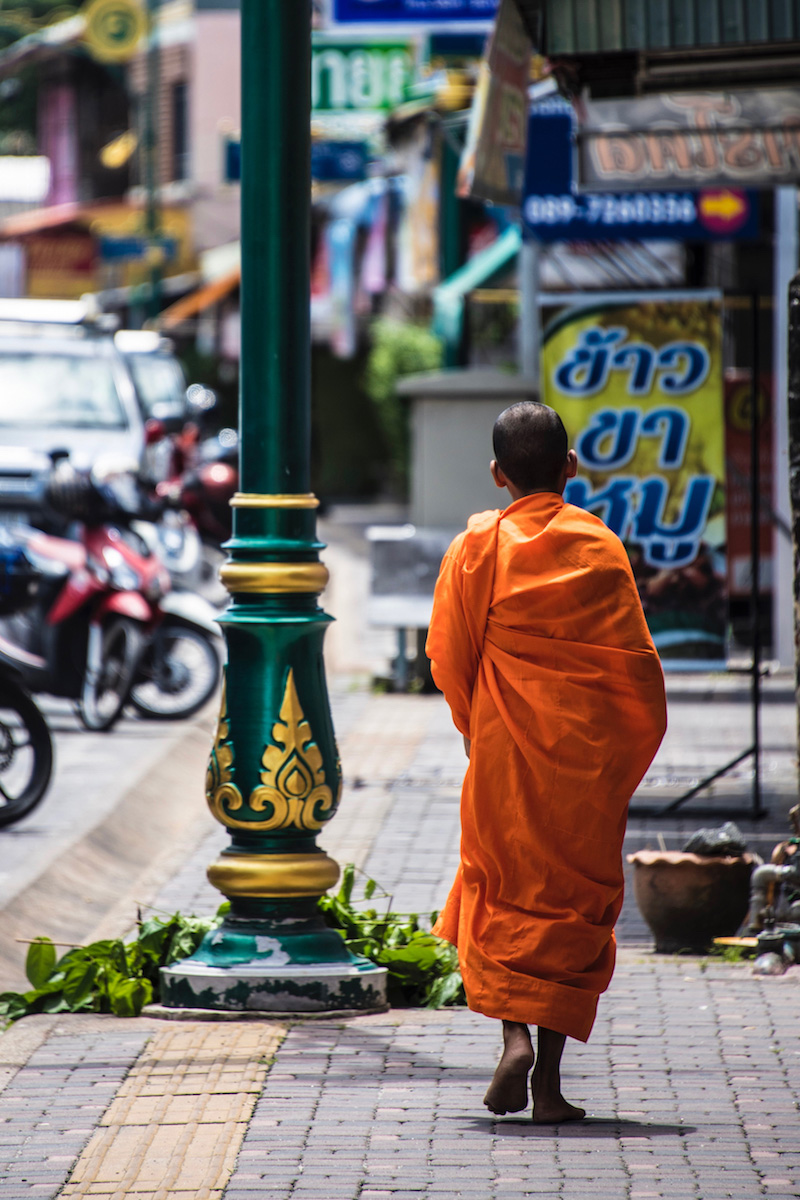 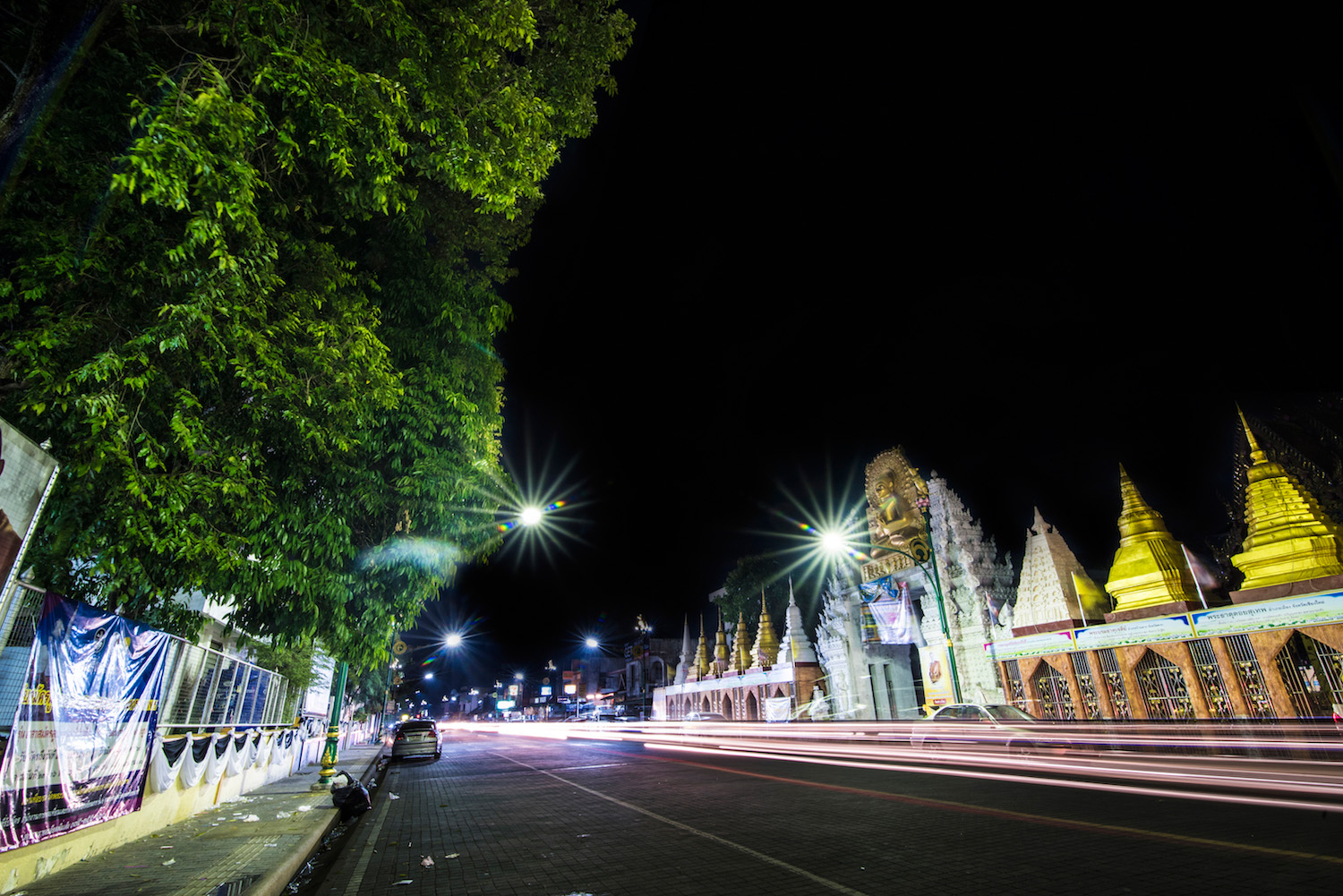 My Favorite Things to Do in Nakhon Si Thammarat

There were a couple hours of light left by the time I settled into Tree Home, so I quickly set off with my camera. It took about 15 minutes by foot to reach Ratchadamnoen Road, the city’s main boulevard, and where most of its main attractions are found. I started at the Old City Wall, which dates back to the late 13th-century, when Nakhon Si Thammarat became an important outpost of the Srivijaya Empire. I quickly made my way to the City Pillar and then to Salahuddin Mosque, and intended to watch sunset from Wat Phra Mahatat.

Instead, however, I found myself stuck at the intersection of Ratachadamnoen Road with Panead Road, fixated on the minaret-crowned flyover bridge that rose above it. It amazed me that someone thought to add such ornate accents to an otherwise anonymous piece of infrastructure. The human side of things to do in Nakhon Si Thammarat amazed and delighted me too, from the watermelon seller who asked me to take his picture, to the group of schoolchildren who asked me to help them practice English (then simply said “Hello” a dozen times each), to the waitress I begged to bring me extremely spicy gaeng leuang pla, even though my blue eyes suggested I couldn’t handle it.

Travel Up the Coast

On the other hand, a place in Thailand is only as “unadulterated” as its beaches. I decided my best bet for discovering Nakhon Si Thammarat’s beaches would be in Khanom, located about 90 minutes up the coast from the city center by minibus (or motorbike, if you can drive one of those—I can’t). I did take a motorbike taxi upon arrival in Khanom Town, and the driver dropped me off at a dilapidated beach hut where two white girls were drinking frozen cocktails. As it turns out, these were not just the only foreigners I would see during my day at the beach, but the only human beings I would encounter for nearly an hour, save for a man in a fishing boat far offshore.

On one level, it’s easy to see why Nakhon Si Thammarat hasn’t become another Phuket or Koh Samui. While its palm-fringed coastline and shell-covered white sands are beautiful, its water is often cloudy, and sometimes mud-brown. Then again, solitude and silence define the world’s best beaches, as far as I’m concerned, and Khanom has those in quantities I haven’t seen almost anywhere else in the world, save for maybe the frozen beaches of Iceland. Beaches are a worthwhile example of things to do in Nakhon Si Thammarat.

Khao Luang National Park, home to the tallest peak in southern Thailand. (Called Khao Luang, obviously.) Of course, I wasn’t about to scale a mountain on a weekend trip. Instead, I went with Tree Home’s owner to Krung Ching Waterfall, from which I’ll admit I wasn’t expecting much. Certainly, I wasn’t expecting the path to be in near-fatal disrepair at several points along the trek, which took about 90 minutes in each direction. The waterfall was truly majestic, however, as were the wild orchids that climbed out of the dozens of pools at its base. I wasn’t surprised at the existence of them—the national park is as famous for the 300+ species of orchids found within it as it is for Khao Luang itself—but I was delighted by the way they manifested. 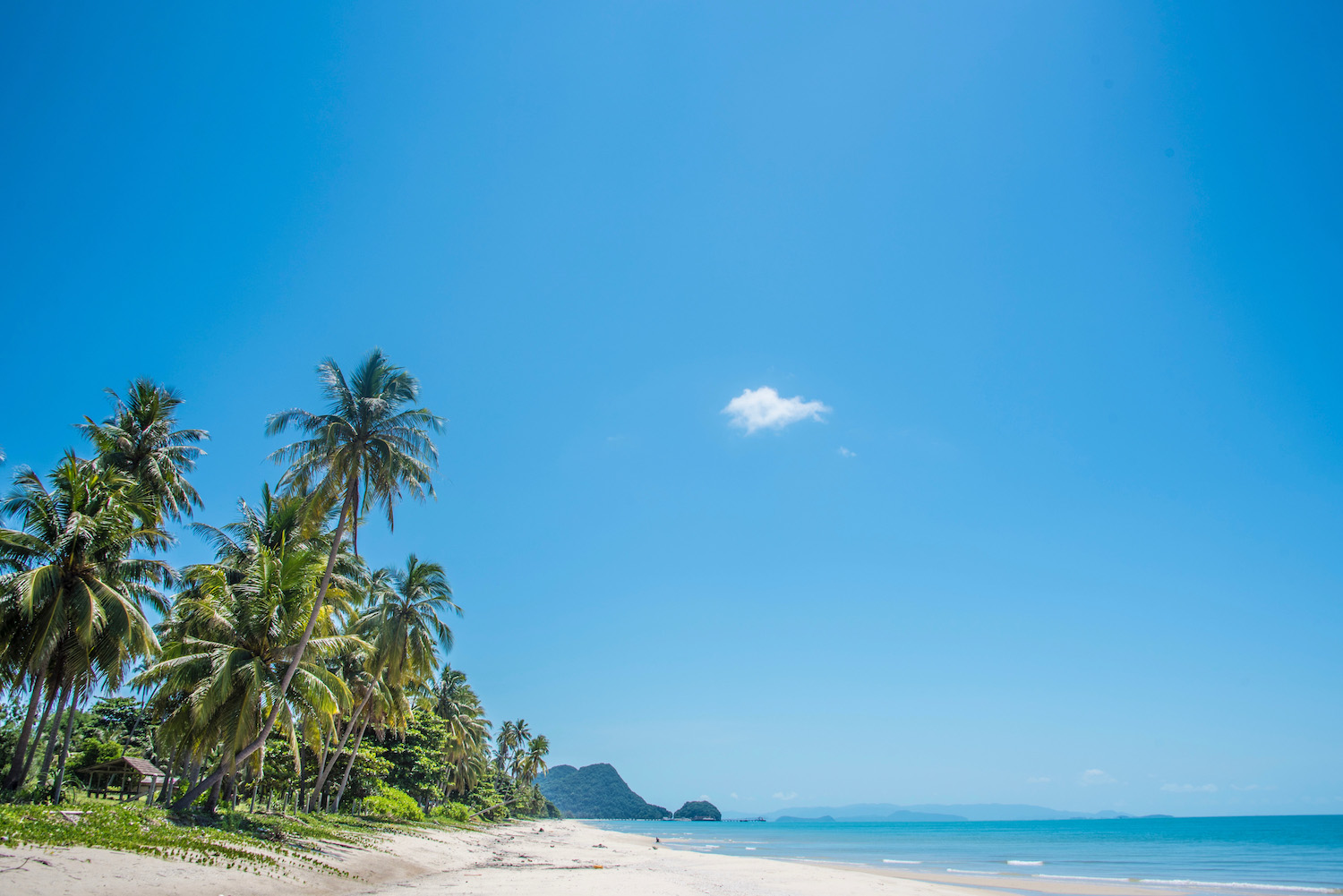 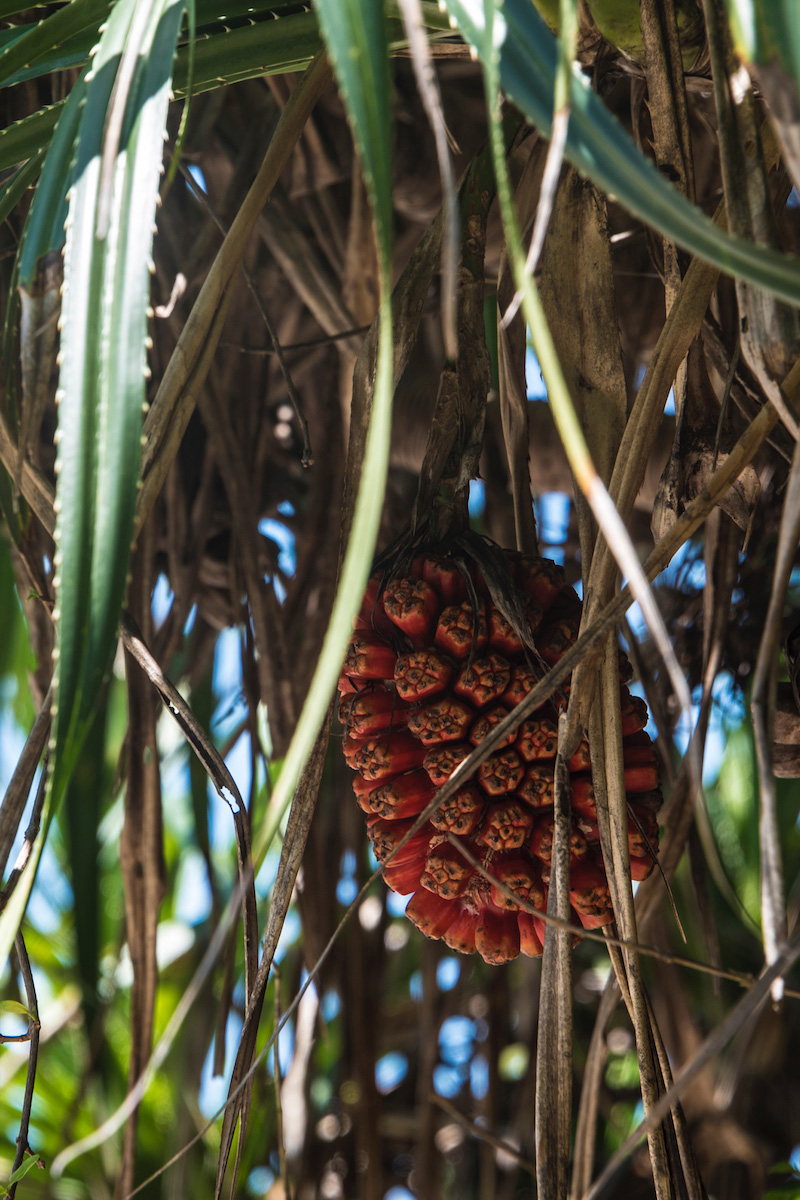 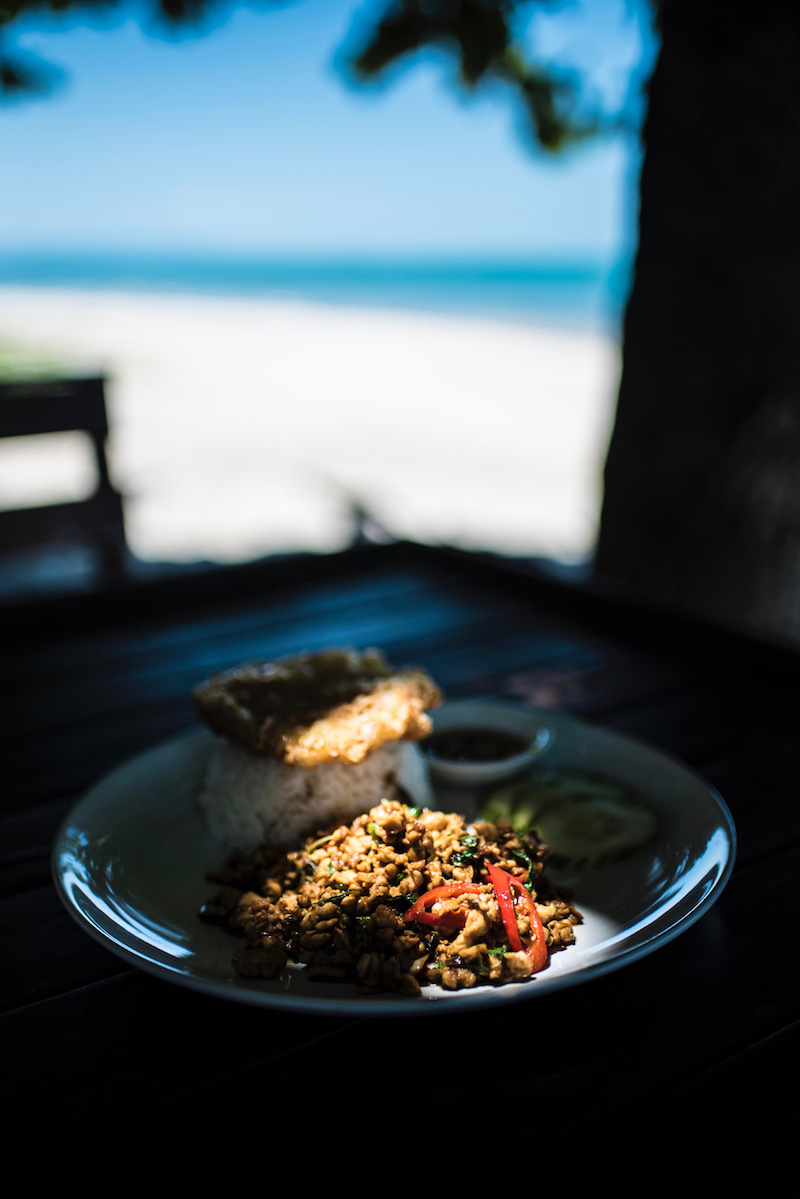 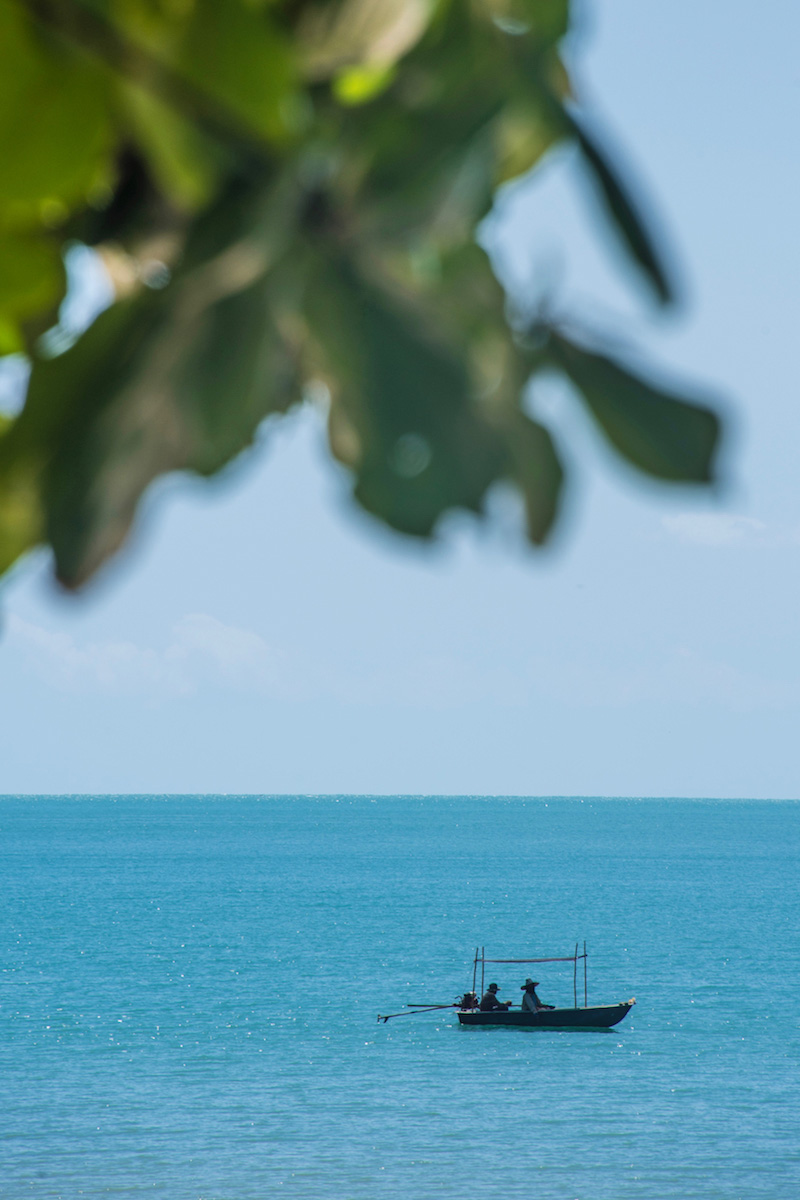 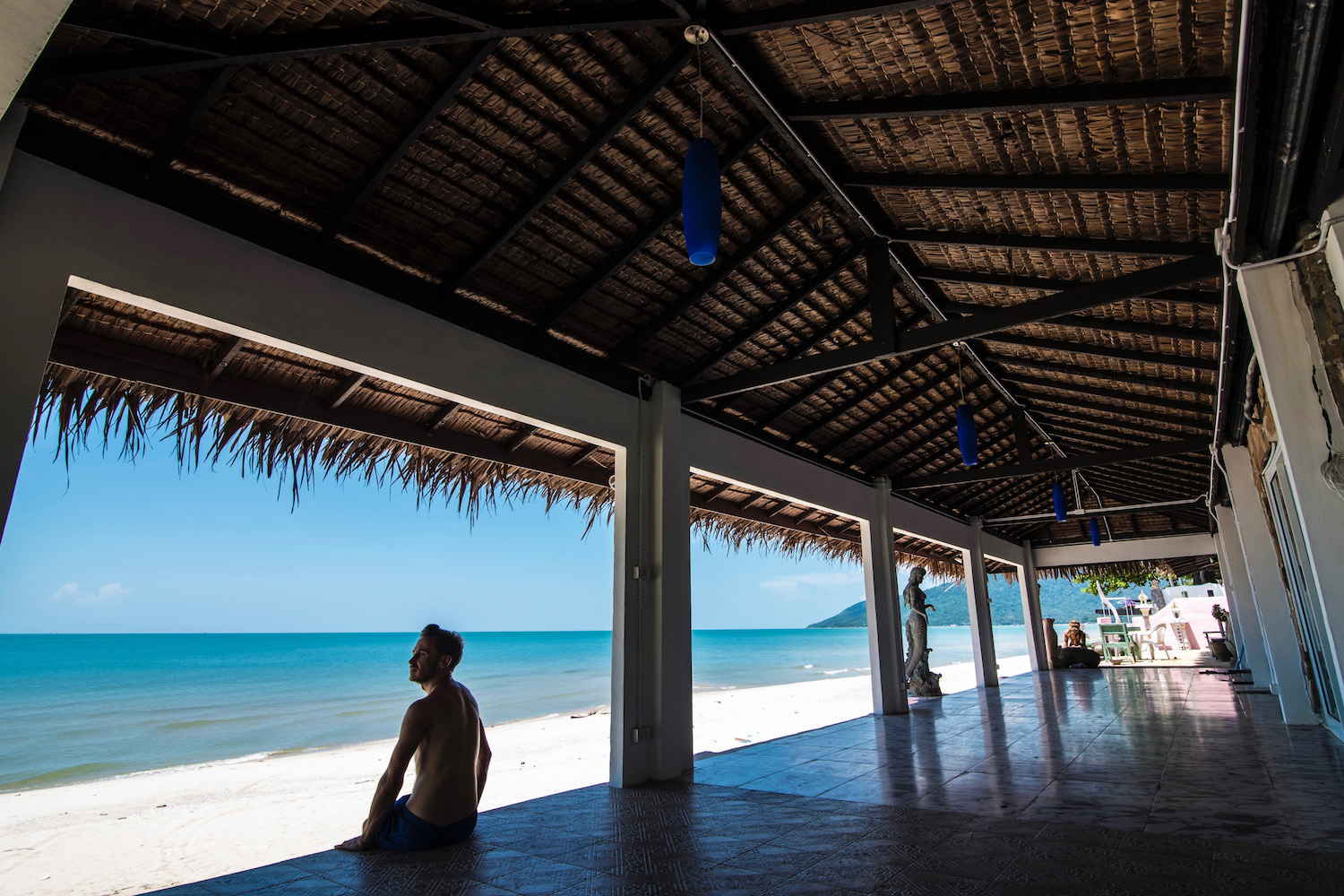 How Long Should You Spend in Nakhon Si Thammarat?

That could be an interesting alternative career choice, I laughed, imagining myself single-handedly upending the global indoor-plant industry. Robert Schrader—orchid hunter. In all seriousness, however, I did think on my way back to the city about the time I’d spent here, in unadulterated Southern Thailand, and how much bang I got for my buck. Was 3 days in Nakhon Si Thammarat too much, too little or just right?

Superficially, the number of things to do in Nakhon Si Thammarat (at least if you approach this through the lens of traditional tourism) is not very high. On the other hand, due to the great distance between the city center and outlying attractions, not to mention the lack of reliable public transport, it’s difficult to imagine a trip to Nakhon Si Thammarat province (at least, one that sees you travel outside the city center) lasting any less than 2-3 days.

Is Nakhon Si Thammarat Worth Visiting?

This leads to an even bigger question, which is whether you should visit Nakhon Si Thammarat after all. Even personally, I had always been bound for other provinces of Southern Thailand, which I neglected to visit out of safety concerns—I still haven’t determined whether those were justified. Of course, it would be foolish for me to deny that my trip to Nakhon Si Thammarat had some value, and that my experiences here were unique.

What I can say definitively is that Nakhon Si Thammarat is not a primary or even secondary Thailand destination. At best, this is a province you should consider visiting if you’ve been to Thailand half a dozen times, and need a break from the more mainstream cities and provinces of Thailand’s lush north and paradisiacal south. Nakhon Si Thammarat is not for the faint-hearted, or for those unfamiliar in any way with the travails of traveling in Thailand. 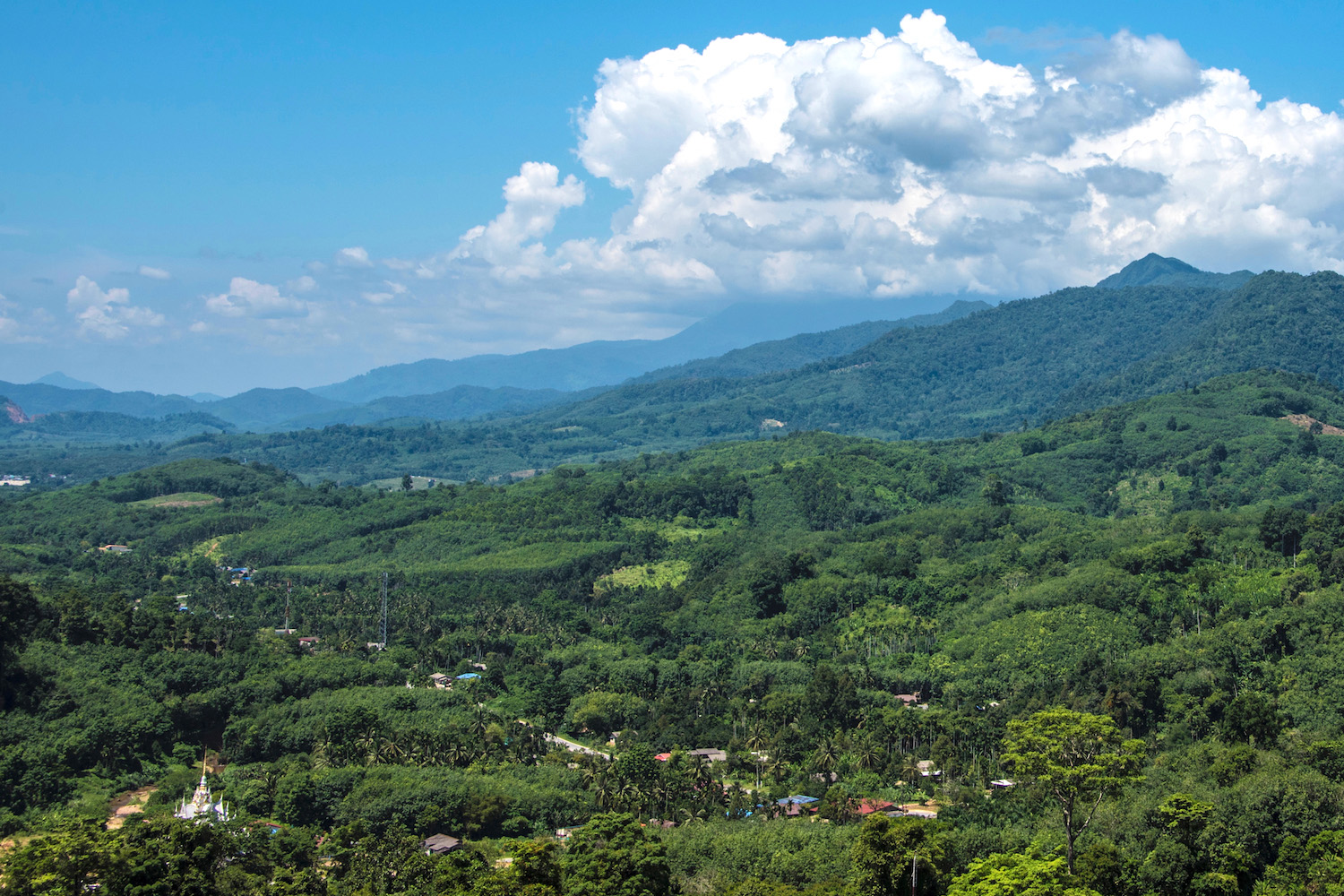 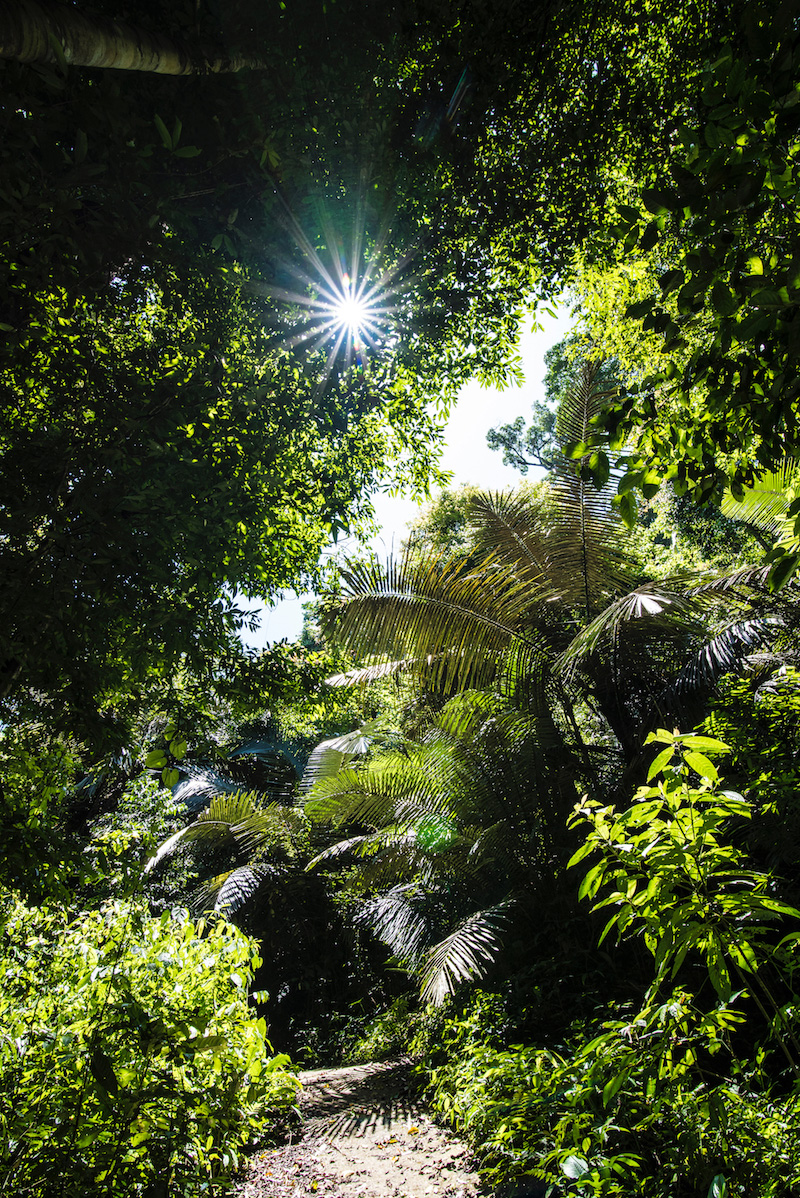 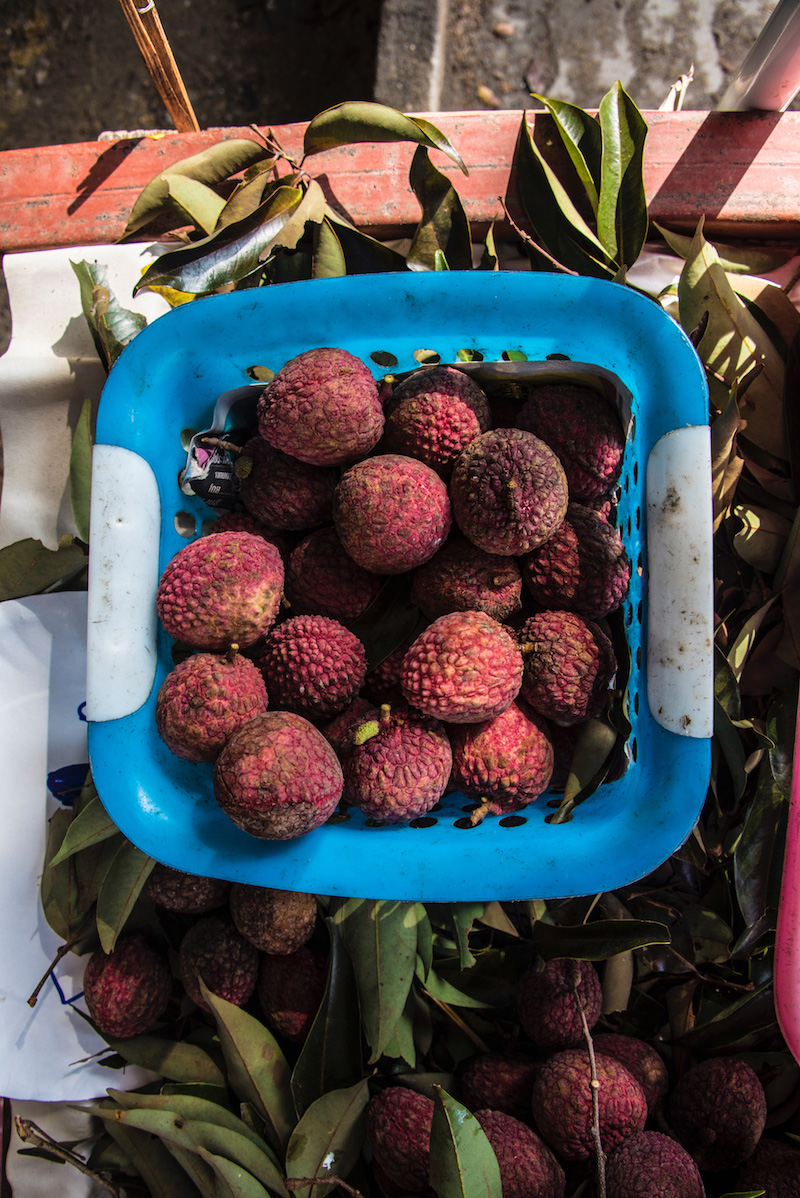 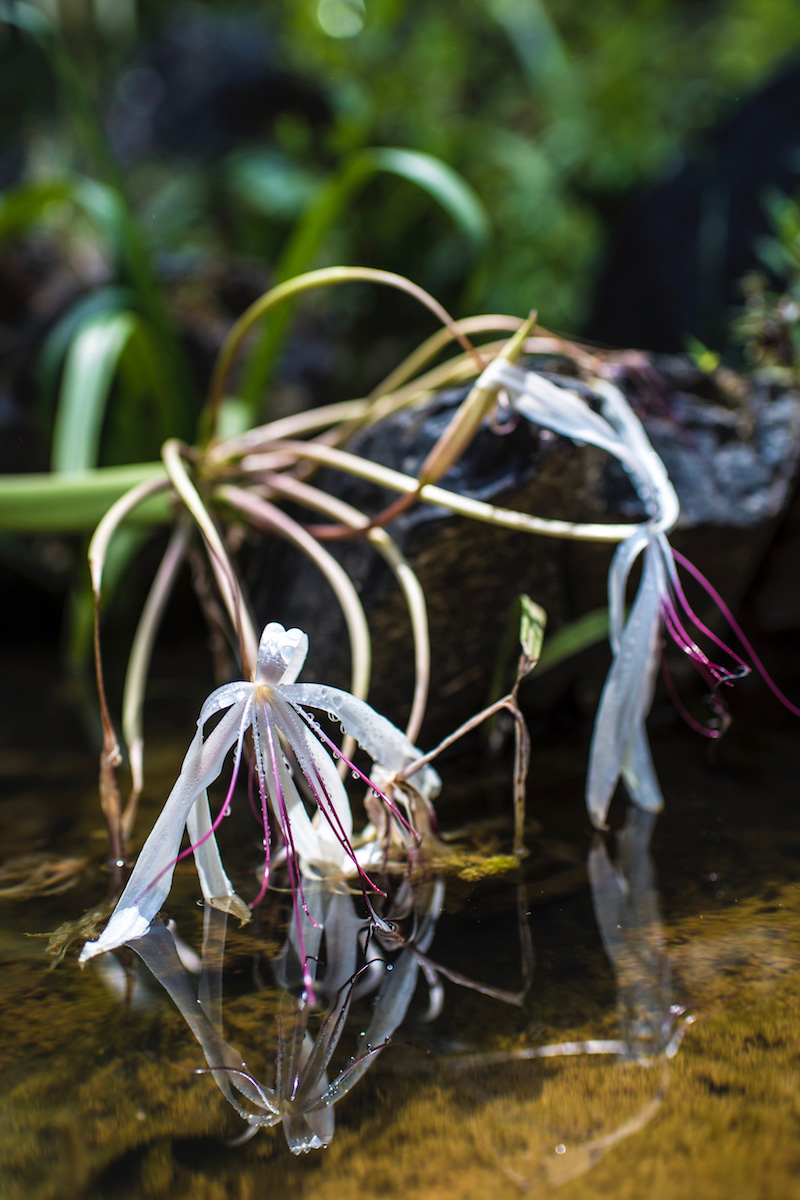 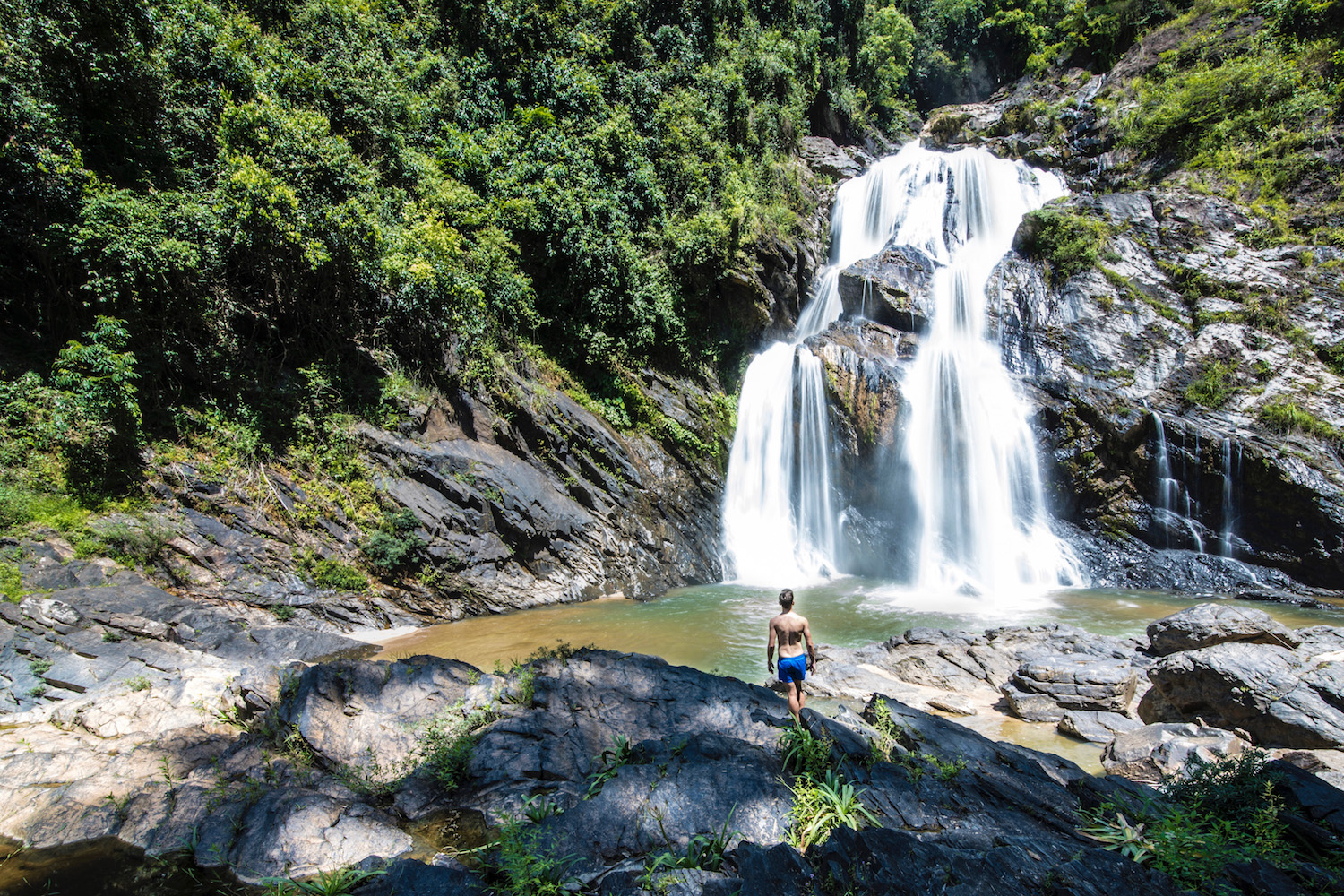 Nakhon Si Thammarat is largely safe from violent crime, as is the case for most of Thailand outside of the Islamic far south, where insurgent-led terrorist attacks can rarely occur. However, Nakhon Si Thammarat features some of Thailand’s most dangerous roads; stray and wild dogs can often be aggressive, presenting a danger of rabies or a painful bite.

How do you get to Nakhon Si Thammarat?

Although you can technically reach Nakhon Si Thammarat by land transport by Phuket and other destinations in southern Thailand, the only realistic way to get there from Bangkok is to fly. Flights depart Bangkok’s Don Mueang airport several times per day.

Are there nice beaches in Nakhon Si Thammarat?

Compared to much of the rest of Thailand, the beaches in and just north of Nakhon Si Thammarat are nothing special. However, if you’re in the province and need a dose of Vitamin Sea, a morning or afternoon along the coast in Khanom is just what the doctor ordered.

Whether you’re looking for charming towns, deserted beaches, quirky national parks or just want to get away from foreigners for a while, Nakhon Si Thammarat is unpretentious, understated and, yes, unadulterated. While I imagine Nakhon Si Thammarat will grow in popularity (and things to do in Nakhon Si Thammarat will grow in quantity and quakity) as more people seek out authentic places in Thailand, the lack of English speakers, tourism infrastructure and stop-the-presses attractions should keep most of the adulterers away. Want to follow in my footsteps through unadulterated southern Thailand? Commission a custom Thailand itinerary!