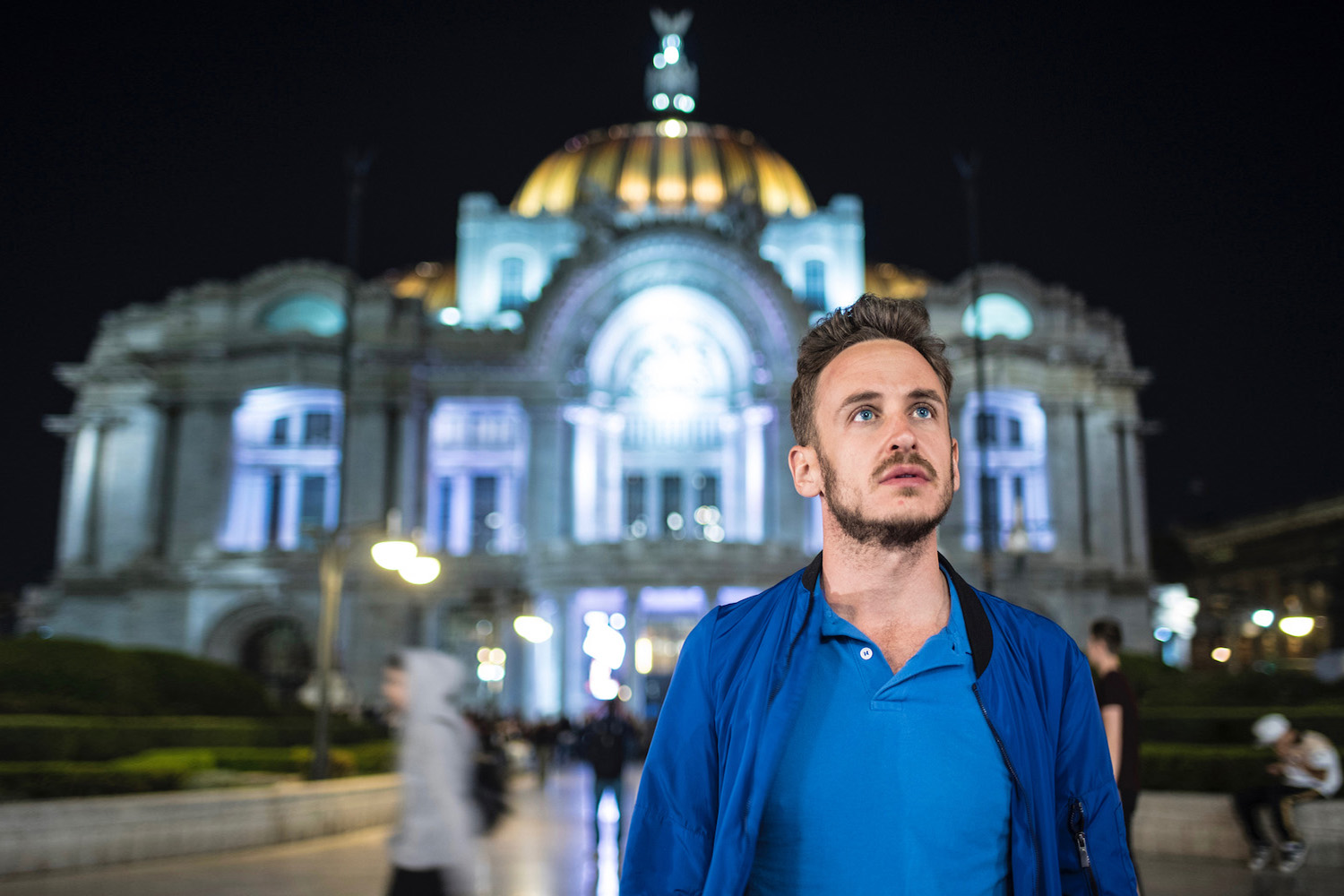 I always suspected I was going to dislike Mexico City. Everything I read before my trip foreshadowed an insipid megalopolis drowning in the sea of frou-frou restaurants, superfluous street art and über-rich neighborhoods that makes most American cities north of the Rio Grande unbearable to visit.

While I hoped going there myself would prove this assumption wrong—I hate putting my name on anything that could be perceived as a hit piece—I fell asleep my first night in Mexico’s capital wishing I’d skipped it for Baja California or Oaxaca.

Need help planning your trip to Mexico? Hire me as your Travel Coach!
Contents
1  Why I Visited Mexico City (Against My Better Judgment)
2  How My Mexico City Trip Went Down
2.1  Downtown disaster
2.2  La concesión
2.3  Day trips and denouement
3  How Many Days Do You Need in Mexico City?
4  FAQ About Visiting Mexico City
4.1  Is Mexico City worth visiting?
4.2  Why is Mexico City so popular?
4.3  How safe is Mexico City?
5  The Bottom Line

Why I Visited Mexico City (Against My Better Judgment)

Ultimately, my decision to visit Mexico City was as much about circumstance as about desire. A few years ago, I needed to be in North America for a few days longer than I’d initially planned; this seemed like the perfect opportunity to spend a few days in CDMX. In spite of fearing I wouldn’t love it, I was actually pretty excited to see it with my own eyes.

As my Uber made its way into the city center toward my Airbnb, I felt pangs of anxiety building in me—and not just because of the standstill traffic I’d failed to anticipate in spite of knowing better. Was this good anxiety or bad anxiety? Was I on the brink of revelation or confirmation? If you’re asking yourself the question “is Mexico City worth visiting?”, I think you’ll want to continue reading.

How My Mexico City Trip Went Down

I try to strike a balance between the tourist trail and the less-beaten path in my blog posts, but I generally begin my own time in a city with a visit to its most ubiquitous landmark. In Mexico City’s case this was Zócalo square, which was desecrated by the ugliest Christmas tree I’ve ever seen, and a massive plastic slide that made the plaza all but impossible to photograph.

Bothered but still bullish, I made my way westward along Avenida Cinco de Mayo toward the Palacio de Bellas Artes, which is probably Mexico City’s other most-famous landmark. While not obscured by hideous decorations (well, unless you count the nearby Torre Latinoamericana, whose observation deck is inexplicably a no-DSLR zone), it was far less attractive in-person than it had appeared in photos, though I decided to reserve full judgment until after night fell.

In the interim I headed north to Plaza Garibaldi, where I expected to find mariachis strumming and singing, but instead found them bored and talking shit amongst themselves, to say nothing of the generally run-down condition of the square.

As the sun descended toward the horizon, I ascended to Café don Porfirio, which seemed to be the best place to marvel at the aforementioned performance hall. But I ended up leaving just seconds after arriving, as construction on the Sears department store below had all but obstructed any view of the now lit-up Palacio. 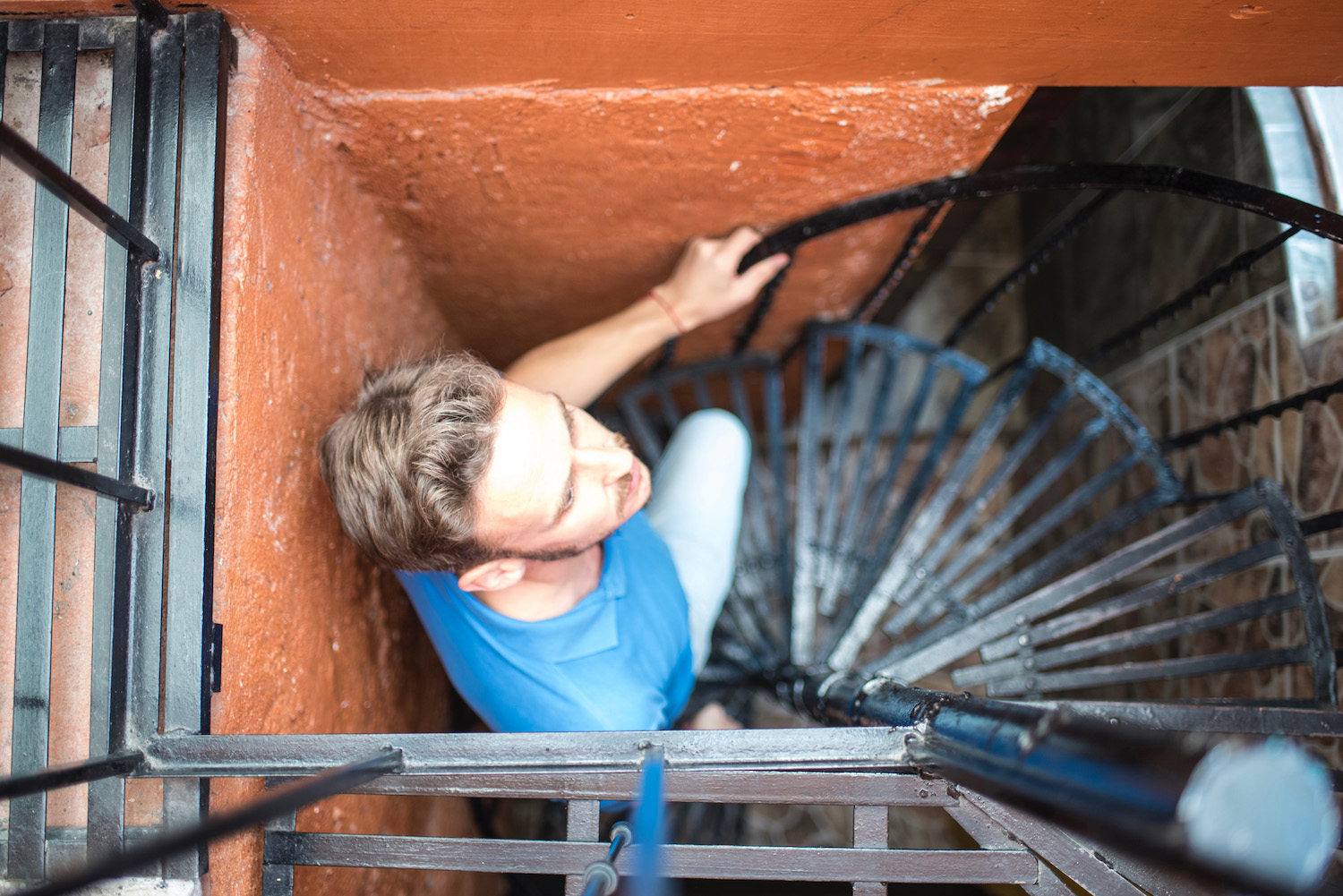 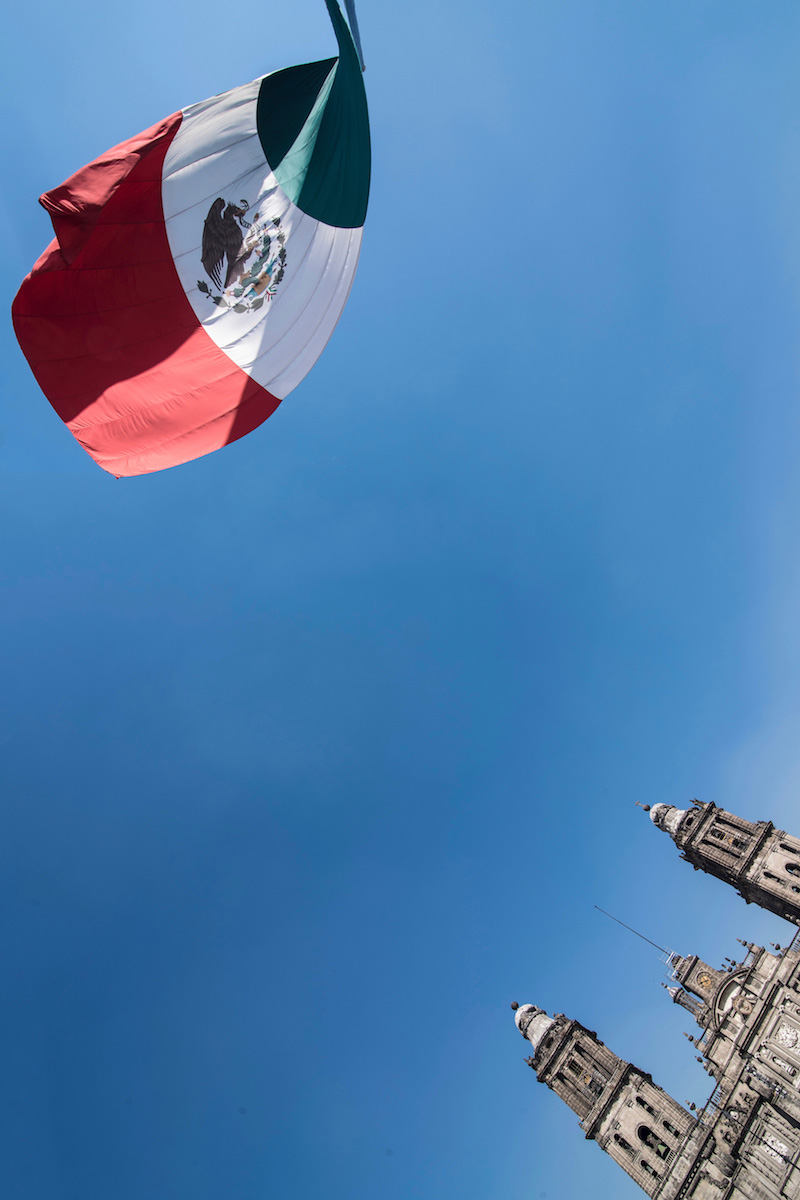 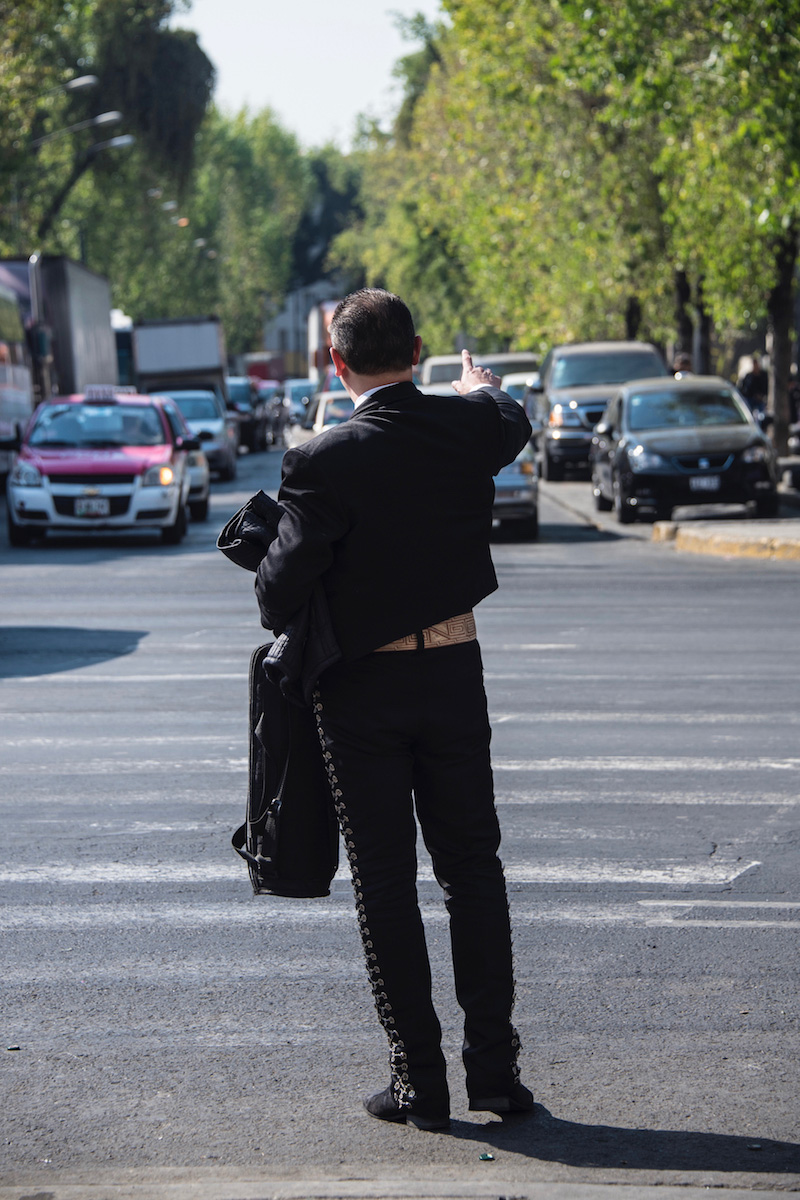 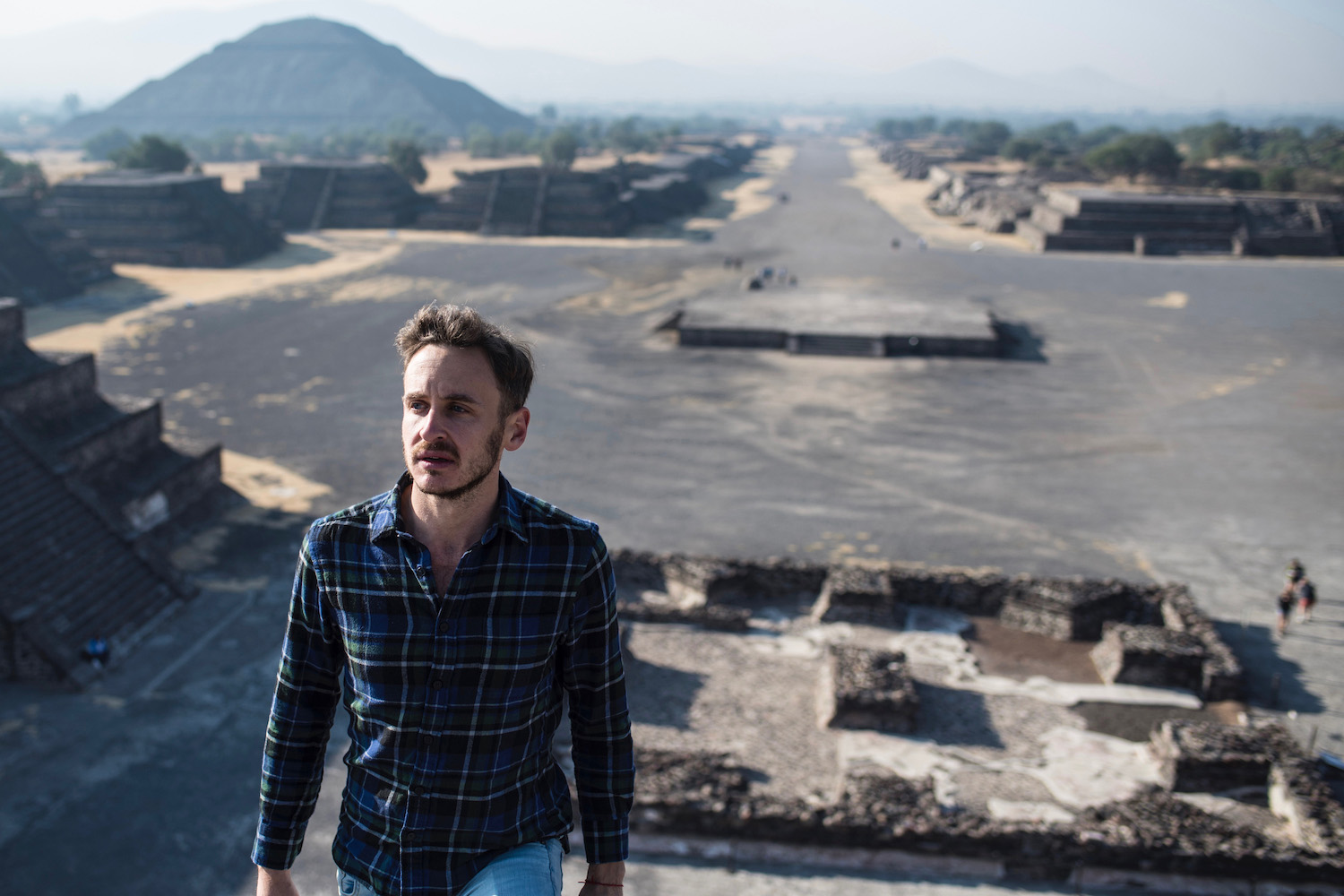 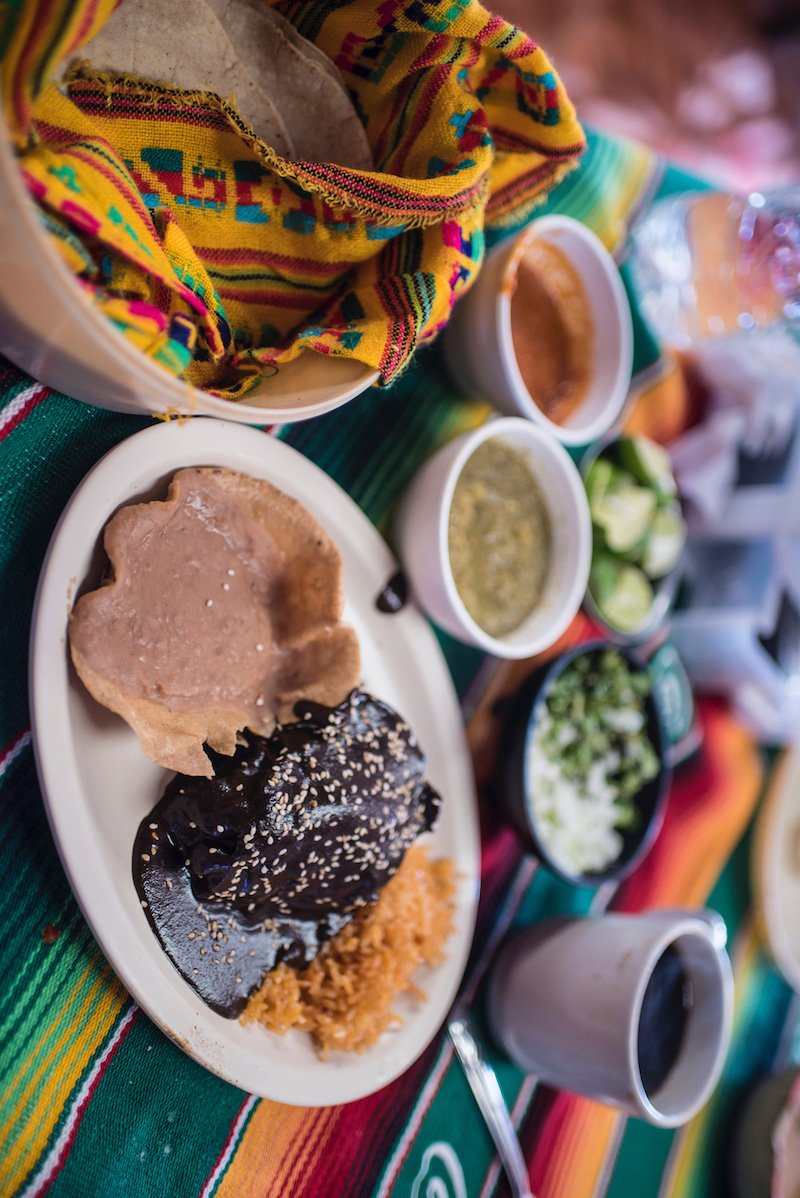 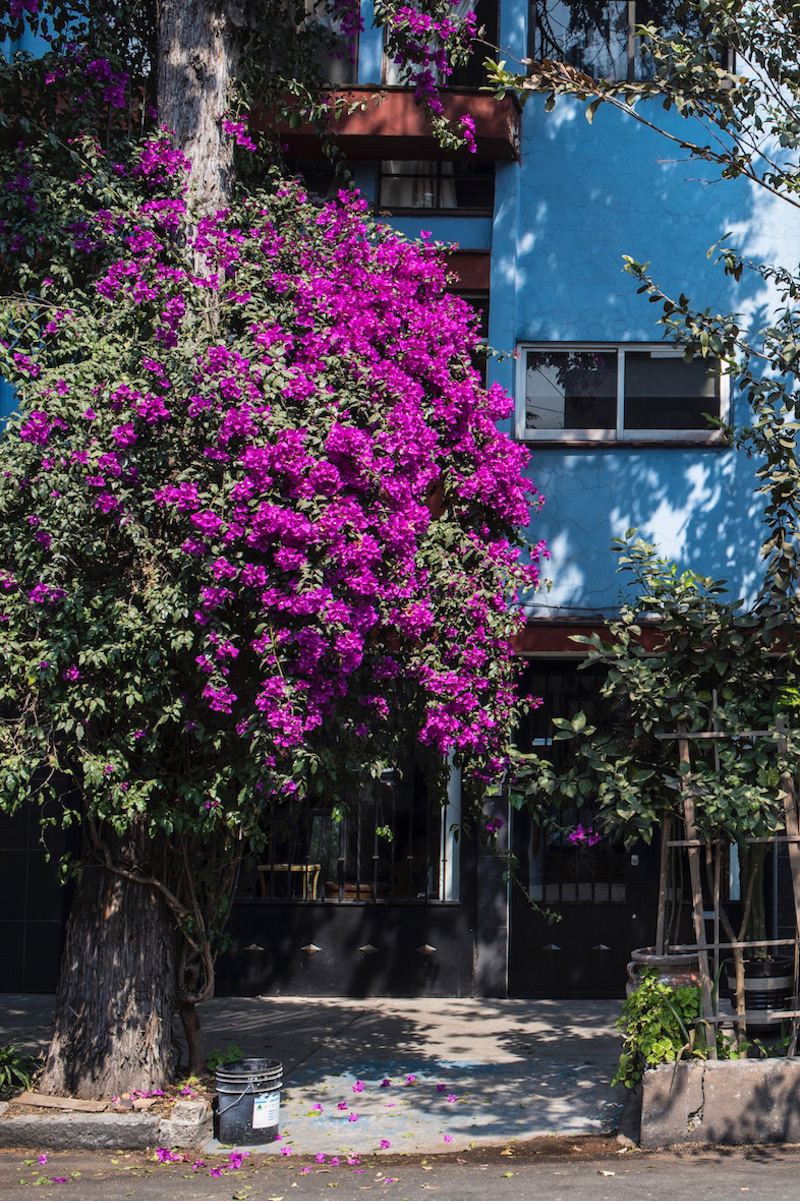 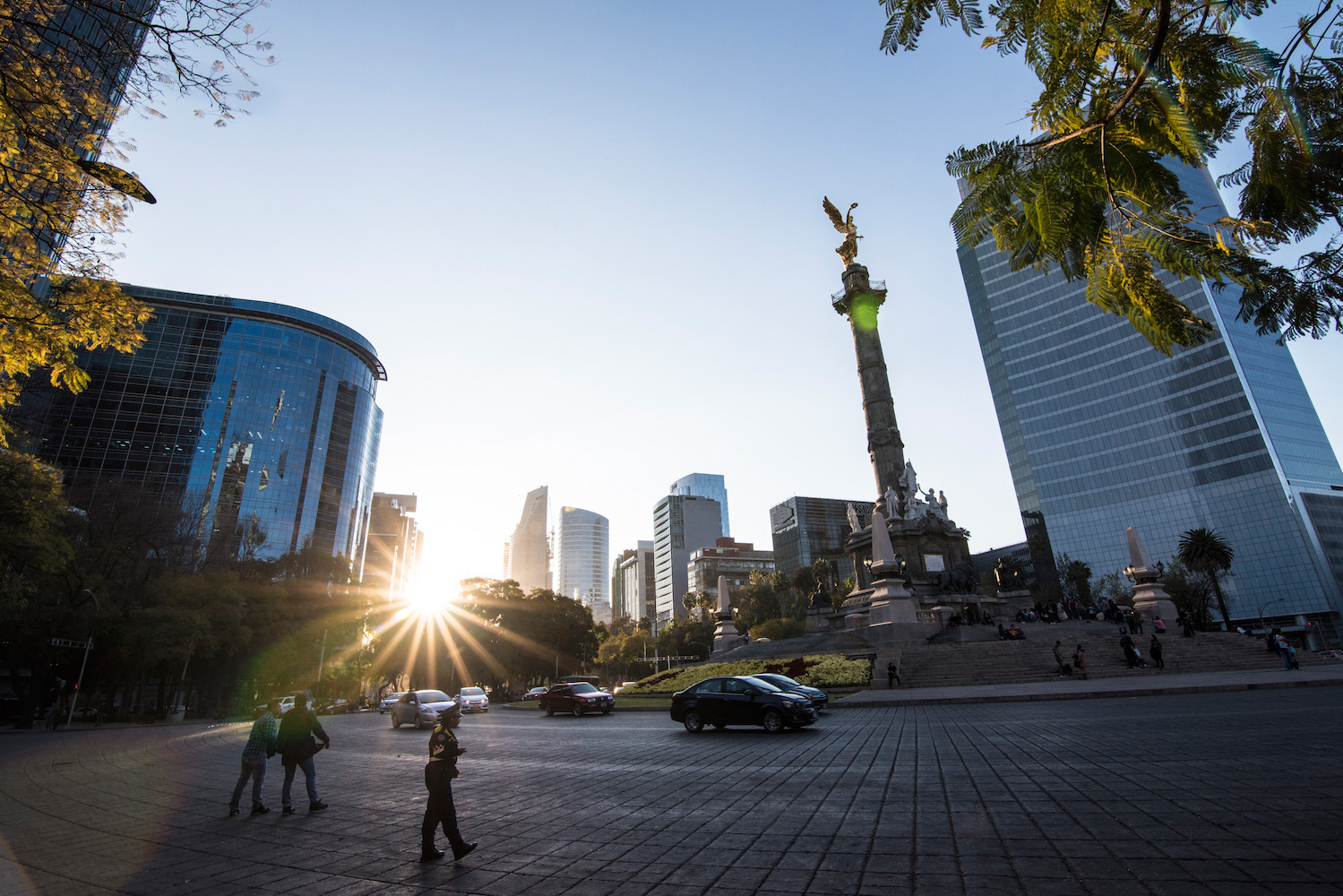 Disappointed, I retreated to my apartment in the famed La Condesa neighborhood, which I’d admittedly found charming upon my mid-day arrival from the airport and during my hurried check-in. Taking to the district’s streets in search of dinner, on the other hand, was nothing short of an exercise in soul-depletion.

In addition to the fact that nearly every person I walked past was white and speaking English, many of the restaurants my host had recommended were precisely the dens of condescension and pretentiousness that make me happy I left the US. Just as I conceded I’d be going to bed hungry, I happened upon a deserted taqueria, where I wolfed down a plate of conchinita pibil.

“Muy rico!” I answered the sweet, middle-aged waiter when he asked me how my meal tasted, wishing I could say the same, in my heart of hearts, about the rest of my experience in his city thus far.

Being that I had only 48 hours in Mexico City before my planned excursion to see the monarch butterfly colony at Cerro Pelon, I’d always intended to wake up my second day without a definitive course of action. The aftertaste of Wednesday afternoon and evening was still quite rancid on Thursday morning, however, so I decided the safest bet would be to make a day trip to the pyramids to Teotihuacan.

This proved a satisfying choice, not only because my crack-of-dawn arrival at the historical site meant I had it almost to myself, but because a tacky tourist restaurant nearby served me perhaps the most satisfying plate of mole I’ve ever torn into. Arriving back to my Airbnb around noon, I faced a binary choice for the evening: Venture out of town again, this time to the Floating Gardens of Xochimilco; or make a second attempt at appreciating the city center.

I ended up walking through door two, but rather than exploring the much-hyped districts of La Roma and Polanco (which I feared would be even more whitewashed than La Condesa), I decided to enjoy the view from Chapultepec Castle, before heading down Paseo de la Reforma to admire its skyscrapers (and El Ángel de la Independencia, the de-facto symbol of Mexico City) as day darkened into night.

Oddly, this proved to be my most fulfilling experience in the city-proper, which surprised many of my Instagram followers when I posted a few photos. “Sorry you weren’t blown away,” one wrote, as if leaving a comment in a guest book at a funeral.

How Many Days Do You Need in Mexico City?

Now, I fully admit that I didn’t spend long enough in Mexico City. If I’d stayed a few days longer, I’d feel more comfortable in my assessment of the city. Or maybe I wouldn’t—maybe I’d have had an experience that changed my mind entirely. For example, if I’d stayed a full week in Mexico City, instead of just three nights, perhaps CDMX would’ve “clicked” for me, in the way it does for less well-traveled people the moment they get there.

Indeed, I’d say that given Mexico City’s size and sprawl and the sheer number of day trips you can take from there, 5-7 days is really an ideal amount of time to spend there. If you stay just 2-3 days like I did, you risk spending so much time getting your bearings that you don’t have any time to actually enjoy yourself. Personally, I hope I can return in the future for longer to give Mexico City a second chance to impress me.

Is Mexico City worth visiting?

Mexico City is worth visiting if only because you need to form your own opinion about the city. However, I would not recommend going out of your way to get there. This is particularly true if you’re a well-traveled person and not easily impressed, as Mexico City is almost sure to disappoint you.

Why is Mexico City so popular?

Among tourists, Mexico City is popular because it’s a short flight from much of the US and Canada, yet it feels much different to non-Mexican cities in North America. Mexico City is also massive, which further increases its appeal to US and Canadian travelers from smaller cities. People who haven’t traveled overseas much are easily charmed by Mexico City’s architecture, culture and cuisine, even though all are pretty average compared to what you find in Europe, Asia and deeper into Latin America.

How safe is Mexico City?

Mexico City is one of the most dangerous cities in the world. Although most crime occurs at night time, it’s possible for you to be pickpocketed or even robbed in broad daylight, depending on where in the city you are. When visiting Mexico City, my best advice is to watch your back.

I admit I didn’t devote enough time to Mexico City—hell, I didn’t even see any Frida-related sights—and although I arrived vowing to prove prevailing narratives about the city wrong, the cynical light they painted it in obscured my judgment. With this being said, I stand by my general conclusion—that Mexico City is vastly overrated—and imagine much of its positive reputation among Norteamericanos derives from how poorly-traveled they tend to be. I plan to return to Mexico in the future (I don’t question if Mexico City is safe to travel, FWIW) but while I can see myself making another visit to delightful Guadalajara, there’s almost no chance I’ll give Mexico City another one. Is Mexico City worth visiting? For me, this is still an open question.