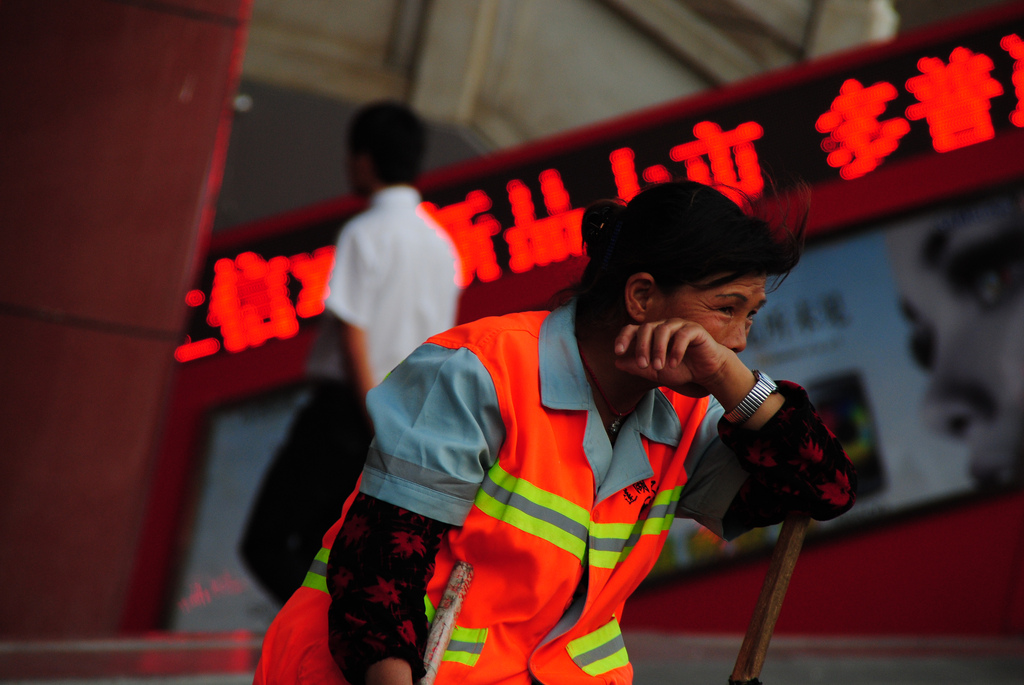 The Air China aircraft parked at Gate 11 of Xi’an Xianyang International Airport late this afternoon was puzzling — the only two flights scheduled to depart out of the gate were a Guangdong Airlines flight to Guangzhou and the one I was waiting for, Spring Airlines #8948 to Shanghai.

Rick joined Dora and I in the mob scene that formed in front of the boarding area. “Why is that Air China plane here?”

“Dora thought that Spring Airlines might be a contract carrier who leases others’ planes.” I popped one of the seaweed-flavored crackers we’d all been given as an apology for the delay into my mouth.

“I wasn’t thinking that.” Several hours of waiting had clearly begun to eat away at decorum. “It’s just what came out of my mouth.”

Whatever the true circumstances of our flight delay — which was already more than two hours behind schedule by this point — the prospect of China’s first (and so far only) low-cost carrier being little more than a branded charter seemed perfectly plausible given the day’s events up until then.

We’d all been optimistic when the car dropped us off in front of Terminal 2. Just inside the door were two ticket counters bearing the Spring Airlines logo. We joined the back end of the line, which extended nearly to the airport entrance.

Dora was the first of us to notice the line wasn’t moving . “What time is it?”

“That’s bizarre — doesn’t our flight leave at 5:10?” She reached her neck up over the crowd. “Wait, both lines have ‘Sorry, Window Closed’ signs on them.”

For my part, I was puzzled as much by our having remained stationary as I was that I’d been patient enough not to have noticed the passage of a half-hour.

Last Friday afternoon – at Spring’s own booking office no less – the ticket agent was frank. “This fright is the Spring Airline. No food, no water, no promise. Is this OK?”

I looked down at the price in front of me and gave him a thumbs up — I knew from the get-go that my experience with Spring Airlines was going to be disorganized, ghetto and probably frustrating.

After a few more minutes of waiting, I jumped to the front of  the second line (hey, only docile-looking Chinese people were standing in it) and took a spot just in front of the high school student sitting behind the counter. He was wearing a t-shirt, cargo shorts and was in the process ticketing the woman ahead of me and 24 of her friends — in China, this is what you call a “tour group.”

“The passports?” He asked after finishing up with Tammy Tourguide and her friends. “How many people are flying?”

I held up three fingers. “San wei.” Lately, I speak to Chinese people in their own language even when they speak to me in mine.

He took the passports from me and fiddled around with his laptop for a moment. I’m not sure how frequently Osama bin Laden flies through Western China using one of his fake passports, but I’d bet even an Islamic terrorist could’ve boarded my flight: the young man didn’t ask or even seem to care about the appearance, whereabouts or identity of the female whose passport he held. Only Rick and I stood in front of him — Dora had stayed in the other line in case we got busted for cutting.

He placed our boarding documents into my hand. “Gate 11, thank you.”

Of course, I’m not complaining about any of this: the compound adjective “ghetto-fabulous” was created for a reason. The thought perhaps they should have been more stringent did cross my mind for a split-second, especially as I walked through “airport security” with pockets full of metal, a pack of matches and a bag literally overflowing with liquids in non-clear containers of volumes greater than 3 oz. each, in a couple cases significantly greater. I’m happy to report that my worry washed away as soon as my butt was in a seat: the only caustic substance I cared about was the lactic acid that had been fermenting in my back muscles.

Dora and Rick enjoyed a brief meal shortly after we found that our flight had been delayed for reasons relating to “traffic control.” The lady chose a “tuna sandwich” while the gentleman opted for a “cheesebeef burger.”

I was tempted to order something called “magic food” until I saw its price — ¥88. Incidentally, I also then remembered the shifty illusionist who’d been performing on CCTV as we queued for our tickets. Magic in China sucks!

Unfortunately for my two companions, airport food isn’t much stronger a suit than magic in the Middle Kingdom, Dora’s ¥38 “sandwich” little more than two slices of fish pressed between pita bread and then heated, Rick’s dish reminiscent of the “burgers” served in my elemetary school cafeteria. To the restaurant’s credit, the cucumber fan garnishes were beautiful.

When all was said and done the three of us survived the boarding process, which ended up happening at nearby Gate 12 more than two hours after our scheduled departure time. Am I terrified as we sit on the runway right now? You bet your life I am! Thankfully, the cabin crew seems to at least look more professional than their counterparts inside the airport — and while at least one of them is definitely not a legal adult, I’m going to keep telling myself that the pilot is licensed.