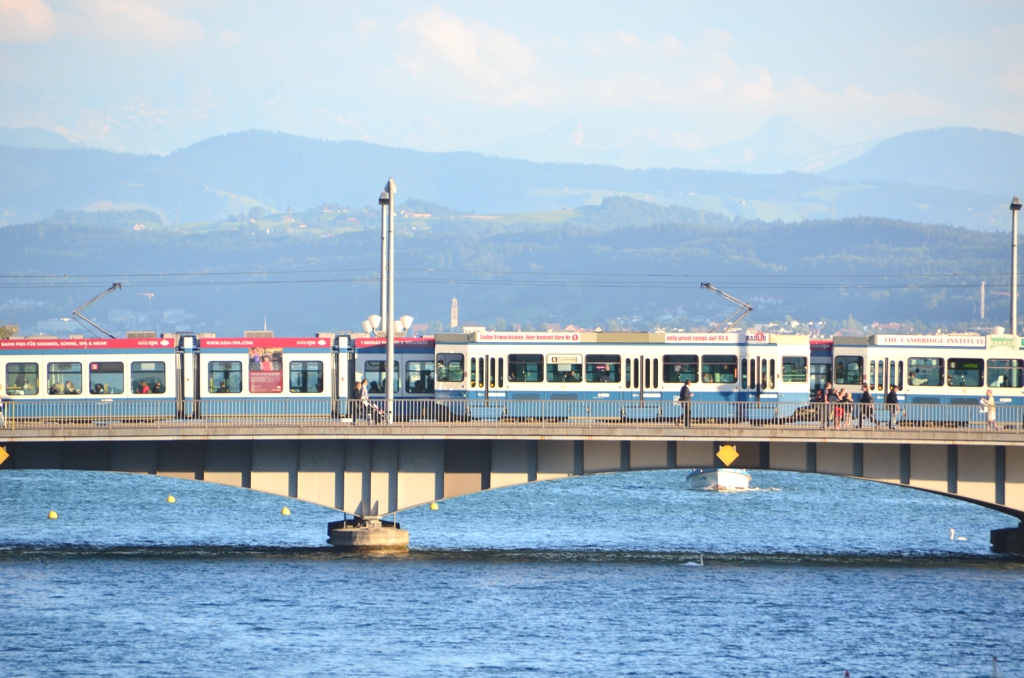 As our train began moving away from Zurich’s Oerlikon station, a glut of passengers  moved inside my vehicle, which is to say that their self-imposed single file funneled them directly from the entrance to whichever empty seat was closest to them.

“Usually,” Bianca said, “Swiss people sit as far away from others as they can. The train is completely full now, so that’s really not possible.” Expectedly, the woman coming our way chose the seat directly across from me, all the others in our cabin taken.

She opened the magazine she brought on-board with her as she was sitting down, the volume squeezed neatly between her thumb and forefinger in the last moment she was standing aright and opened exactly to the first page the moment her butt hit the seat, upholstered in a freshly-vacuumed royal blue accented with squares that were perfectly equidistant from one another. The colors varied, although none matched the banana-candy yellow linoleum plasticing most of the walls I could see from where I was sitting.

Her medium-brown locks were pin-straight; her part, which seemed almost ruler-drawn, was just to the right of center (from where I was sitting; it was really left): a celebrity-grade coif, through and through. Her outfit was quotidian–Levi’s, a wool blazer and a forgettable blouse of some kind–but ironed and washed impeccably enough to look as if it had never left the display window. The only thing more arresting than how put-together the woman who happened to sit across from me on the train home appeared was that every other woman I could see was exactly as styled, as if wig-perfect hair and clothing fresh off the sales rack are part of the Swiss dress code.

For the record, I do believe they are.

On the way to the airport in advance of my recent trip to Singapore, a Malaysian friend of mine engaged me in a dialogue. “Have you ever been to Switzerland?”

“So you know what a clean country looks like, yes?”

“Refie,” I said, “I’ve heard a million times that Singapore is clean–I know this.”

The chaos of Kuala Lumpur International Airport’s “LCC” Terminal up ahead, he slowed his speed. “As a country, Singapore is clean–it’s clean by force. But the people are not naturally clean as they are in Switzerland. Singaporeans practice cleanliness because they’re afraid of punishment. The Swiss practice cleanliness because it’s all they know.”

By the time the train arrived in Wettingen, the majority of the clone army had already disembarked, the aforementioned woman still as buried in her periodical–and as seemingly unaware that I’d been studying her as she was of my presence at all–as she’d been in the first place.

After exiting the vehicle, Bianca and I began making our way northward. We continued walking northward for so long, in fact, that all the passengers who’d been ahead of us in the procession had already branched away toward their homes.

She pointed toward the body of water just to the right of us. “That’s the River Limmat, the same one that runs through central Zurich.”

Having seen a hardware store, a pharmacy and a tailor’s shop at least three times each in the five or so minutes that had passed since we departed the Wettingen Bahnhof, it began to seem less strange that such respectable-looking people had been on a commuter train heading to a suburb nearly an hour outside the city. This was, of course, because it took me until precisely that moment to realize that Wettingen isn’t a suburb–it’s a small city that happens to be located suburb-distance from a larger one. Baden, less than 30 minutes away by foot (and three minutes by train), is slightly grander in scale but also completely separate.

A different train than we’d been on sped silently (and without smoke) along the tracks just behind the Limmat, behind which abjectly green (in daylight, anyway) and unspoiled mountains rose up at least 20 times higher than any building. I felt no less than a half-century removed from where I was, probably in the future.

Stucco-spattered stone walls rose to our left side, behind which charming homes with colorful shutters and grass trimmed as neatly as the flowers in the adjacent beds seemed transplanted directly from greenhouses. Not a creature was stirring, which is impressive considering it wasn’t yet nine P.M. as we two mice crept past. “I hope we get there soon,” Bianca said. “I hate walking through the ‘hood at night.”

“How far is Brato’s place?”

“Do you see that orange and blue light?”

I didn’t. “Yes, that one there?” By the time she began speaking again, I’d found it.

“We must walk there and then he will come get us.”

About ten minutes, we found ourselves sitting in a parking lot adjacent to the light, which was shining from a branch of the Coop grocery store, which was also completely dark and locked up at a seemingly early hour. Bianca lit a cigarette.

After a few puffs, she turned her head and whistled. “Do you see someone coming toward us?”

I shook my head.

“Oh, I thought it was Brato maybe.” She resumed inhaling.

A few moments later, another whistle, only this one was definitely coming from behind: it was Brato. For what it’s worth, I’ve never been to another place where a man and a woman can respectably whistle to get the other’s attention.

This is also the ‘hood, Bianca whispered as we strolled along the apartment complex’s wide pathways, all the people on its fenced-in balconies completely clothed and sitting properly. In the distance, a group of young men were playing field hockey under lighting at least as bright as the sun, the coach’s reprimands as flaccid as their agitation at knowing someone among them had violated the rules of the game.

When we arrived at Brato’s home, I was exactly as alarmed by his previously-unkempt girlfriend Veronica’s new demeanor–I worked today, she laughed and tucked a renegade piece of her trainer-tamed mane behind her ear–as I was that the unit (Bianca and Estelle often remind me that, by Swiss standards, Brato is “poor”) was no less than twice as big as the first house I grew up in, its lace curtains, chandeliers and bejeweled candle holders at least twice as ornate as anything in my grandmother’s house, which is filled with actual antiques.

Veronica placed the cocktail glasses down in front of each of us in metered succession, then rose from the table to reveal the perfect circle in which they’d been set. “I hope you don’t mind, but I only have pre-mixed mojitos. Is that OK?”

Bianca nodded, I smiled and Brato pointed off toward the kitchen. On its own, her subservience (emphasis on the “her”) evoked immediately what I thought the 1950’s must have been like in the United States. The fact that everyone except me was smoking cigarettes–and the presence of the aforementioned lace, crystal and jewels–reinforced this.

The primary difference, however, between that time and place in history and Switzerland today–excepting how much cleaner the trains here are–is how willful the social reservedness seems, how conscious the Swiss seem of it when you press them on it and how naturally unaffected (almost oblivious, really) they seem when you stare them down on their way home from work.

Veronica pulled her camera from the bag I didn’t know she was carrying. “Do you think we could get a picture together?”

When the future Mrs. Brato arrived behind me, she was standing relatively far back–my arm ached the moment I put it around her. Her husband-in-waiting held his finger on the button for exactly as long as anyone else in the world would have prior to snapping the photo, although he didn’t need to count–and neither did I. In the wake of the flash, I lowered my cramping extremity, but without much urgency: there is little room for haste when Swiss people do choose to show their emotions.