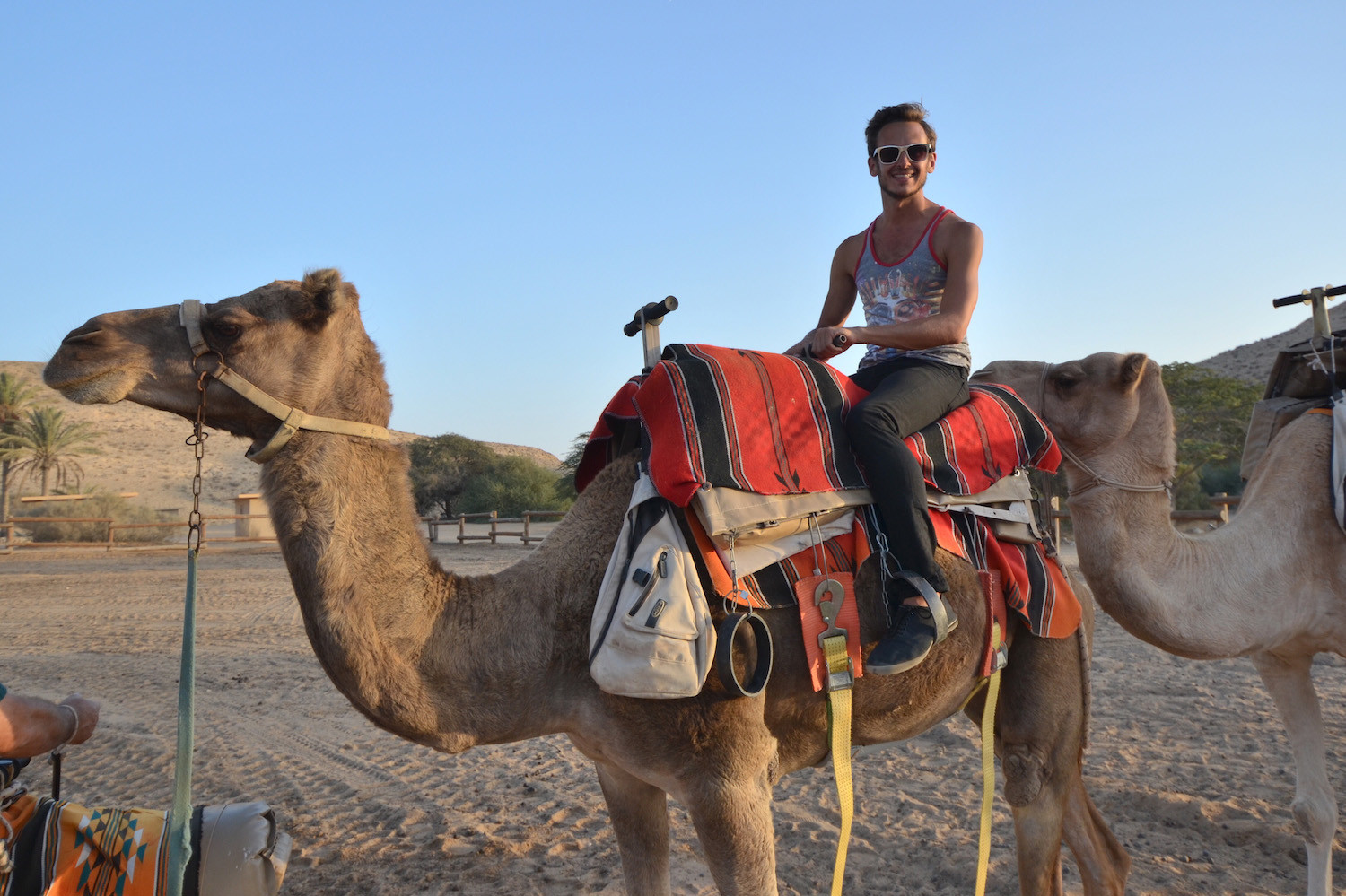 Many of you know that camels are my favorite animals. I’ve made a point of riding them as often as possible when I travel – in Egypt, Morocco and Australia so far – but my love affair with God’s greatest humped creatures goes back well before I boarded a plane over any ocean.

The year is 2000. My younger sister and I are teenagers, although in spite of our mounting puberty, we cling to several childish habits. For example, playing with stuffed animals and making them talk. One such stuffed animal was a camel named Humphrey.

Initially, Humphrey was a cute and benign camel, making happy, squeaking noises rather than actually verbalizing anything. Over the years, however – and I do mean years, as in right up to today – Humphrey turned sinister and became “Grumphrey,” a devious, potty-mouthed camel with an eclectic range of hobbies, including credit card theft, cross dressing and espionage.

My humped alter-ego notwithstanding, I genuinely adore everything about camels, from their sweet faces, to their not-so-sweet grunts, to the way their hooves smoosh into the sand when they walk through the desert.

It’s a beautiful coincidence that today’s camel experience, which I’m enjoying deep in Israel’s Negev desert, is occurring on Wednesday – hump day. Continue reading to learn why today is my best hump day ever!

Need help planning your trip to Israel? Hire me as your travel coach!

The story of the best hump day ever begins at the Negev Camel Ranch, about 15 minutes away from the town of Dimona, in Israel’s vast Negev desert. But the story of the ranch’s owner, Ariel Ullman, goes back a lot farther. Like, hundreds of years farther.

Ullman’s family has called the Israeli desert home almost as far back as the 12 Tribes period, and he himself has been working with camels since the age of 15. Today, he’s internationally regarded expert in camel training and breeding, having worked with camel owners – and prospective camel owners – from countries as diverse as Australia, India and Saudi Arabia.

The decision to open the Negev Camel Ranch to tourists came more out of necessity than want. “We give the camels an extremely high quality of life here,” Ullman explains, “and in order to do that profitably, even with the sales of our products and services, we needed tourists.”

Originally most popular with tour buses full of Holy Land visitors, the ranch has in recent years used the Internet to make itself available to independent ecotourists, who not only love camels, but are interested in enjoying quiet time in the desert. (I am here for all of these reasons, and then some!)

I arrive at the stable just before 5 p.m., along with five German tourists who’ve just driven past and signed up for the star attraction of the ranch: Camel rides! We mount our steeds (“Hold on tight and lean back,” Ullman advises) and before we know it, we’re off. 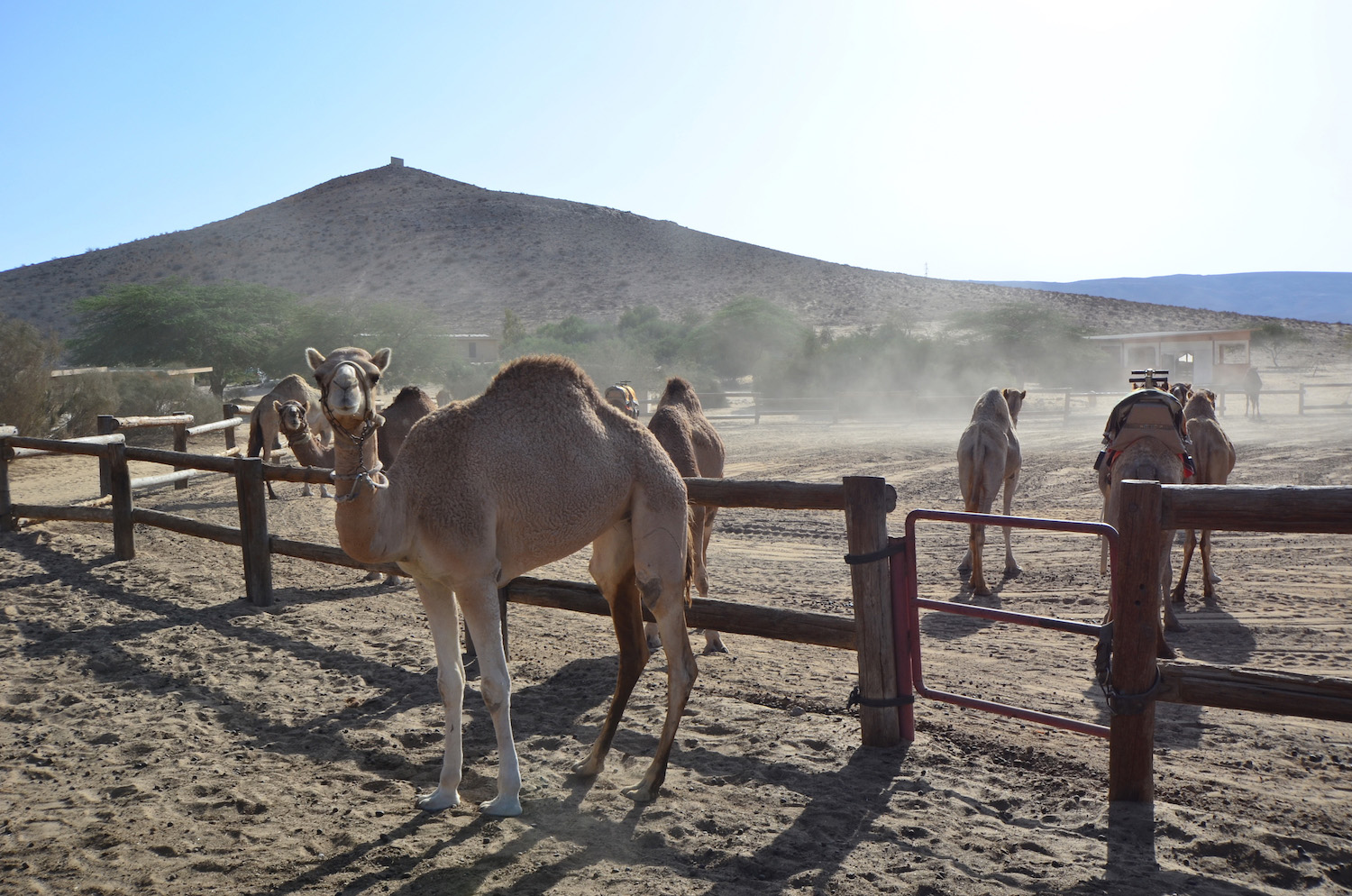 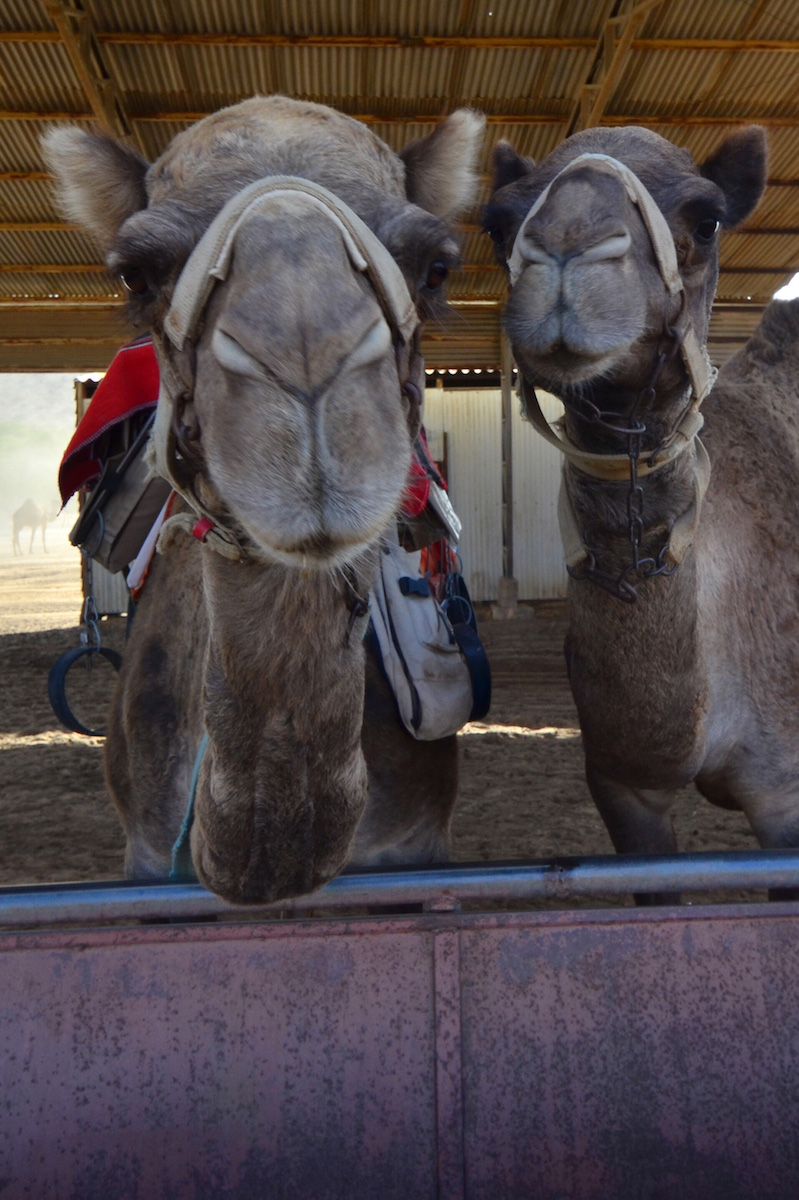 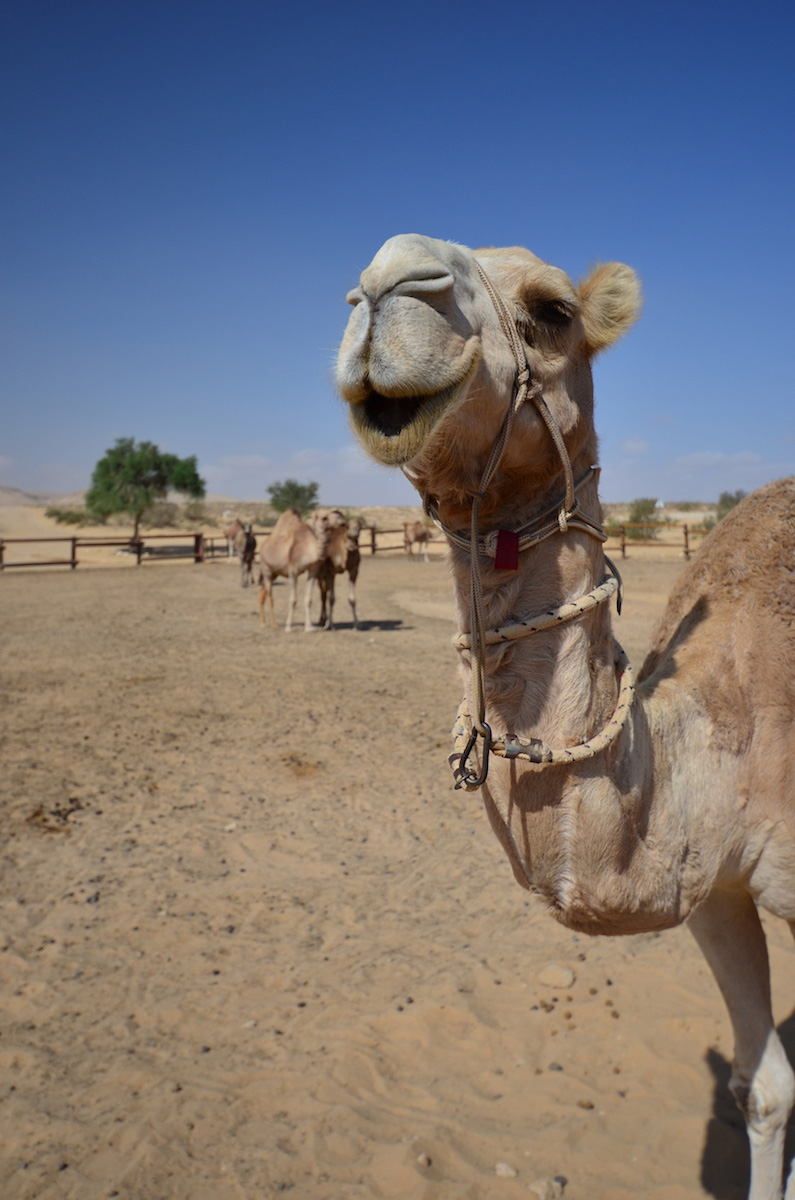 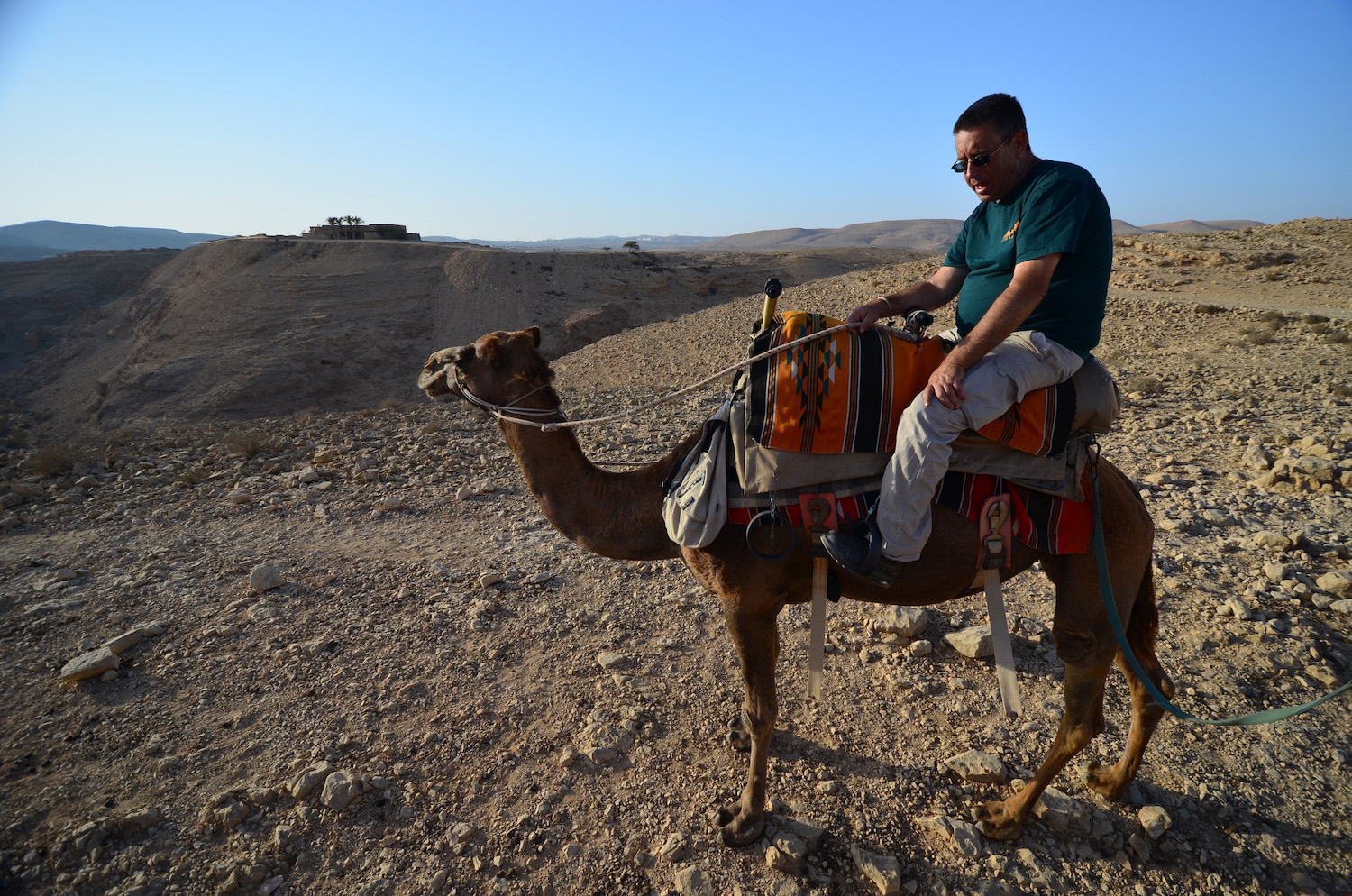 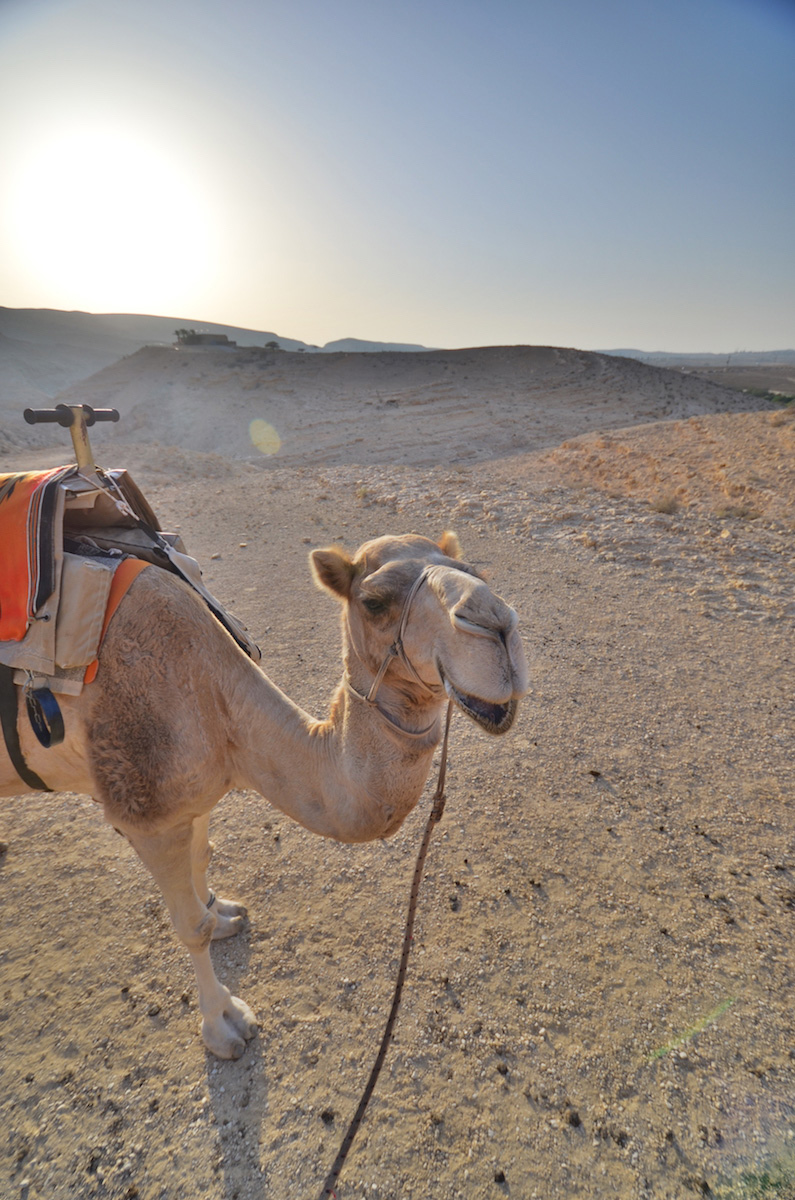 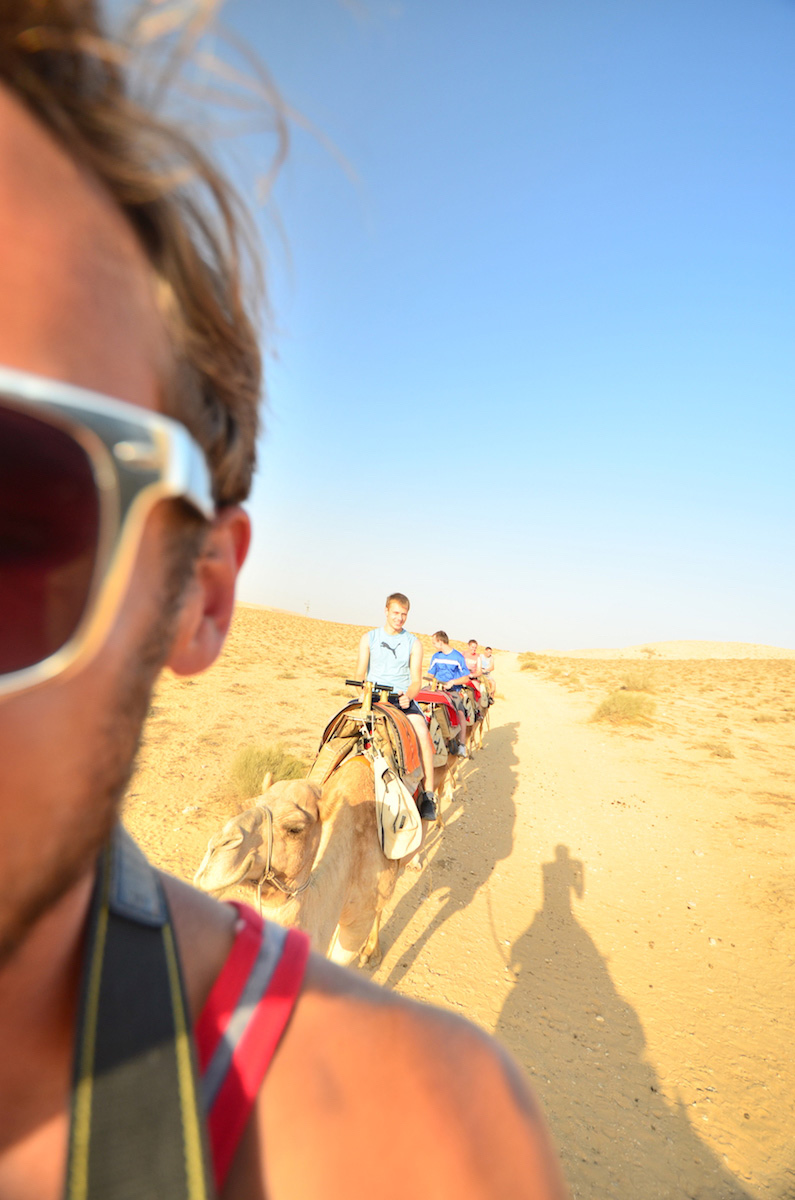 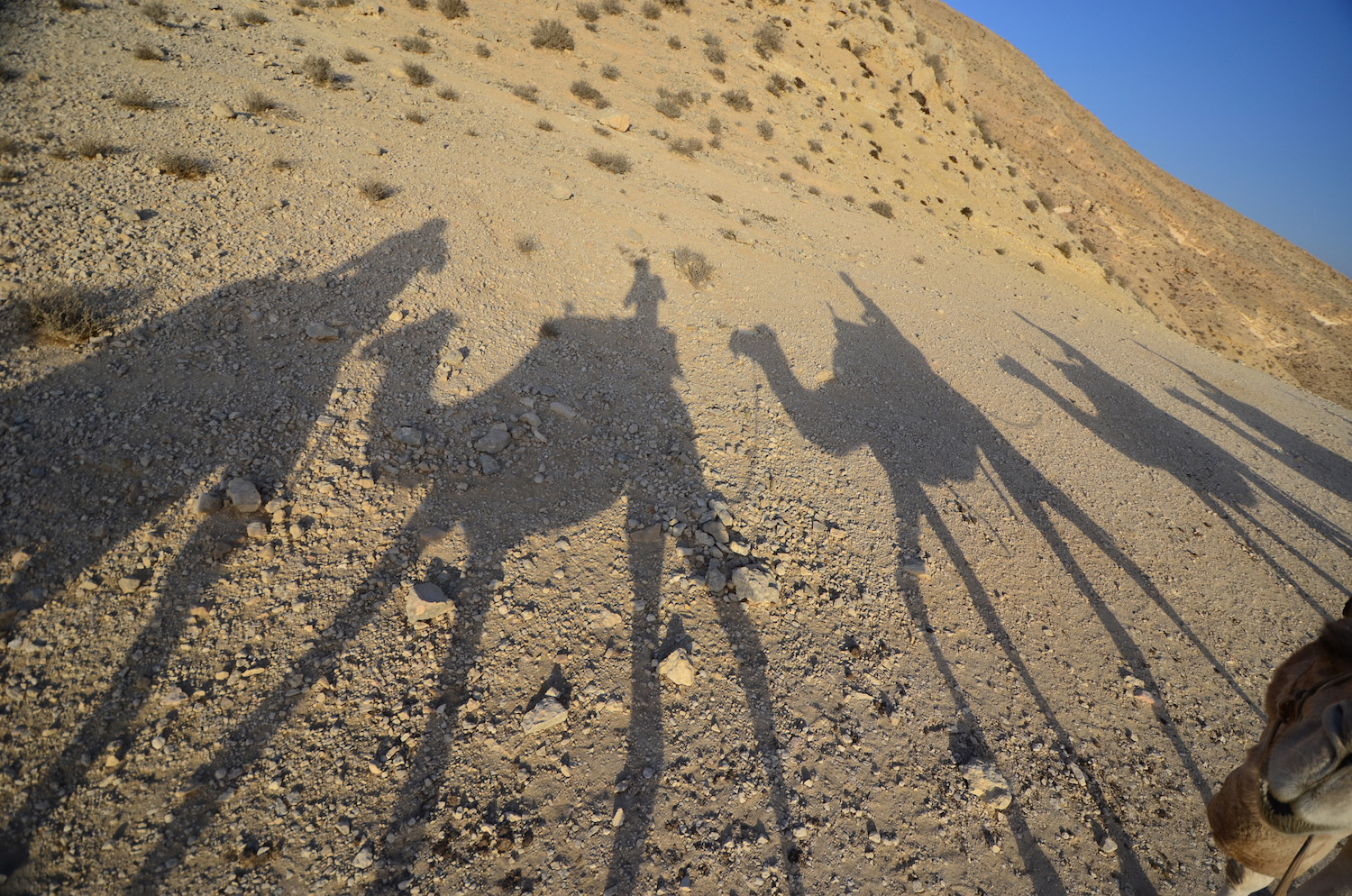 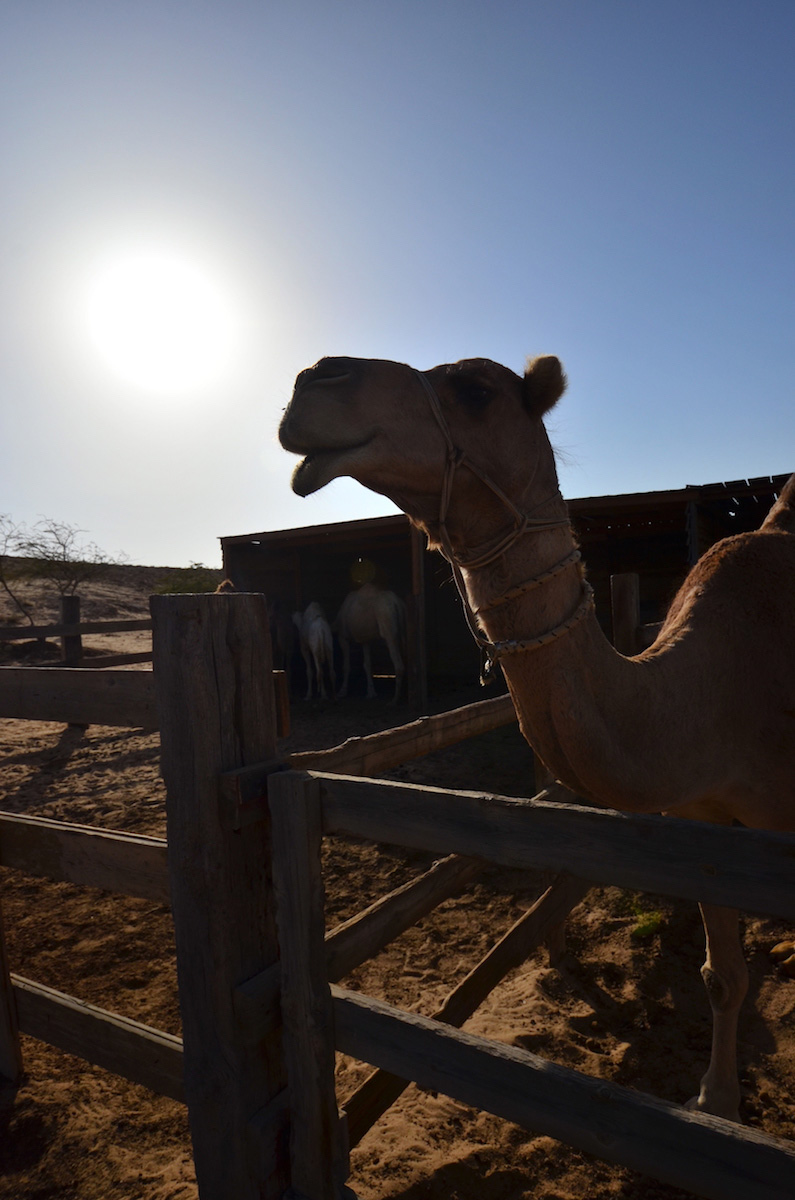 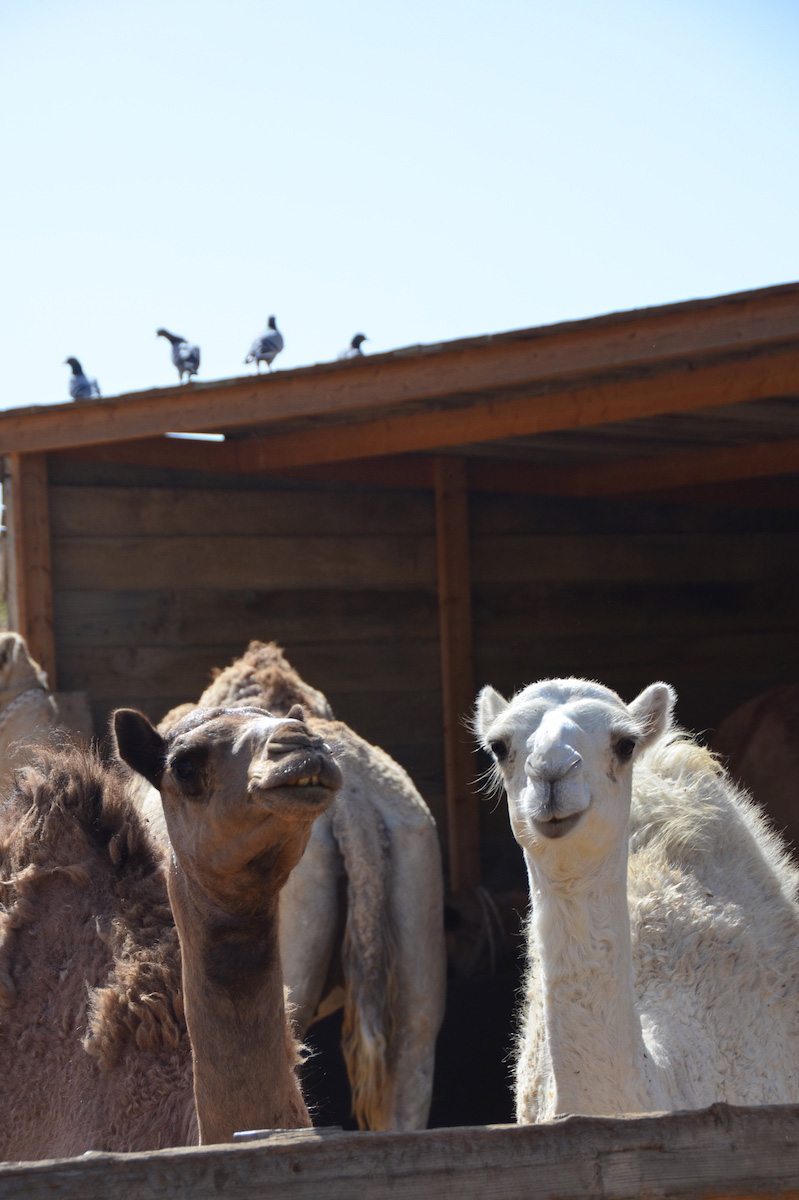 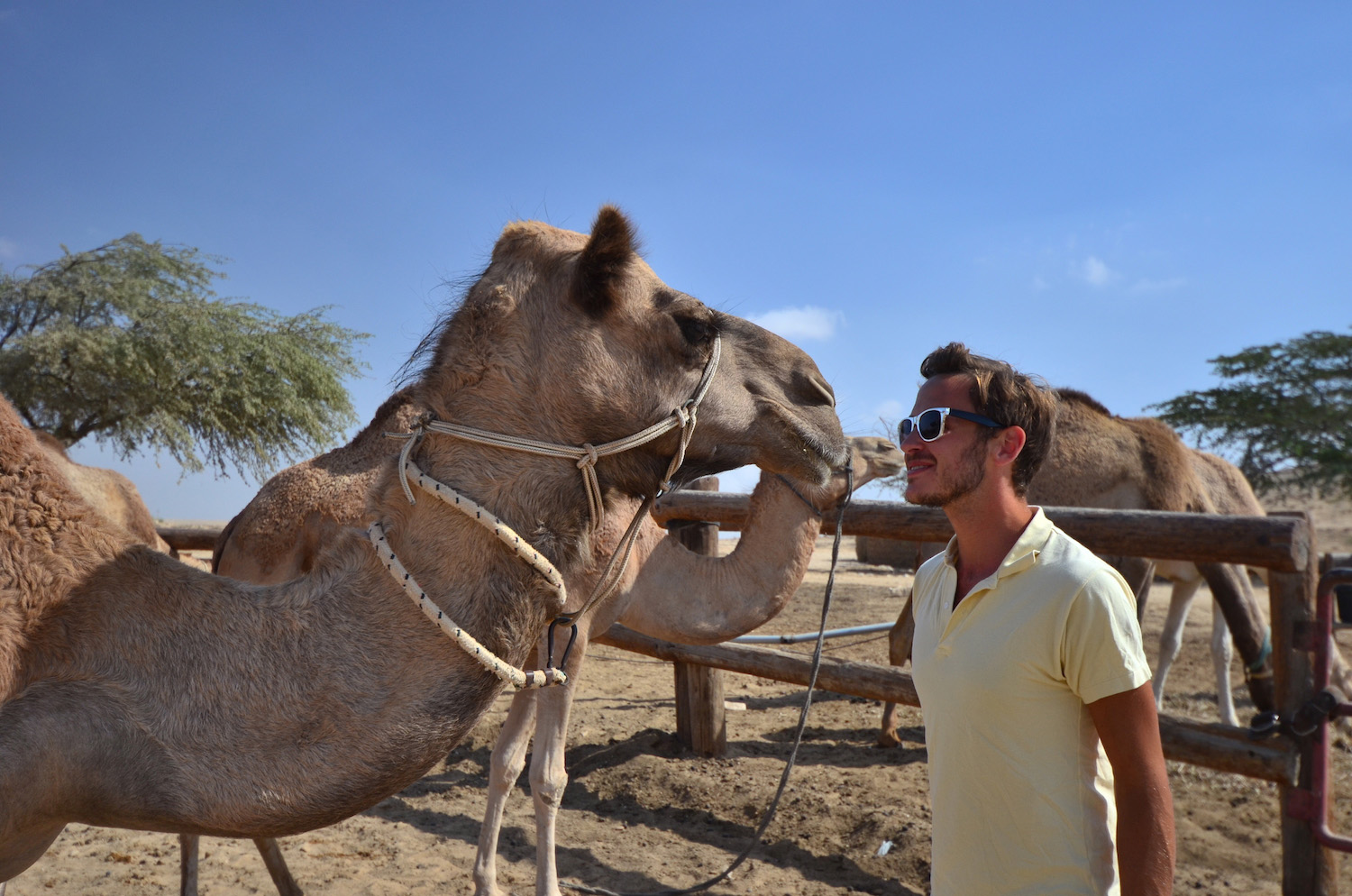 Ullman’s half-century living in the desert has not only afforded him a great deal of knowledge about camels, but also about the history of the region. As we ride away from the ranch, and into the endless horizon, he explains how the route we’re traveling on has been in use for at least 2,500 years, back to the time when the Nabataeans (i.e. the people who built Petra) controlled the Incense Route.

The sun is quickly setting, our shadows – and, more noticeably, those of the camels – growing longer, and all the while it’s as if I’m literally floating on a cloud. (In addition to his training and outreach services, Ullman also exports custom-crafted saddles, which are regarded as the most comfortable in the world – I now understand why.)

The funniest thing about camels is how much they actually look and behave as I imagined Grumphrey might have – I created him, after all, prior to ever having seen a camel with my own eyes. I can completely imagine his strange, high-pitched voice emerging from their always-smiling mouths, which says nothing of how appropriate it would be for such quirky-looking animals to blather off the shit he talks.

To be sure, as I was walking along the side of the stable just before the ride began, I was initially dismayed that none of the camels were paying attention to me. So, what did I do?

“Hey cutie,” I said in Grumphrey’s “seductive” voice, the one he uses when he’s cross dressing and trying to get tips from lonely passers-by. Almost immediately, as if they knew my entire life story, the entire pack of almost 20 camels walked over to the fence, each one more curious than the one next to him about what else I might have to say.

This special hump day wouldn’t have been possible without the kindness Ariel of the Negev Camel Ranch, who hosted me and took me on a legendary camel ride.