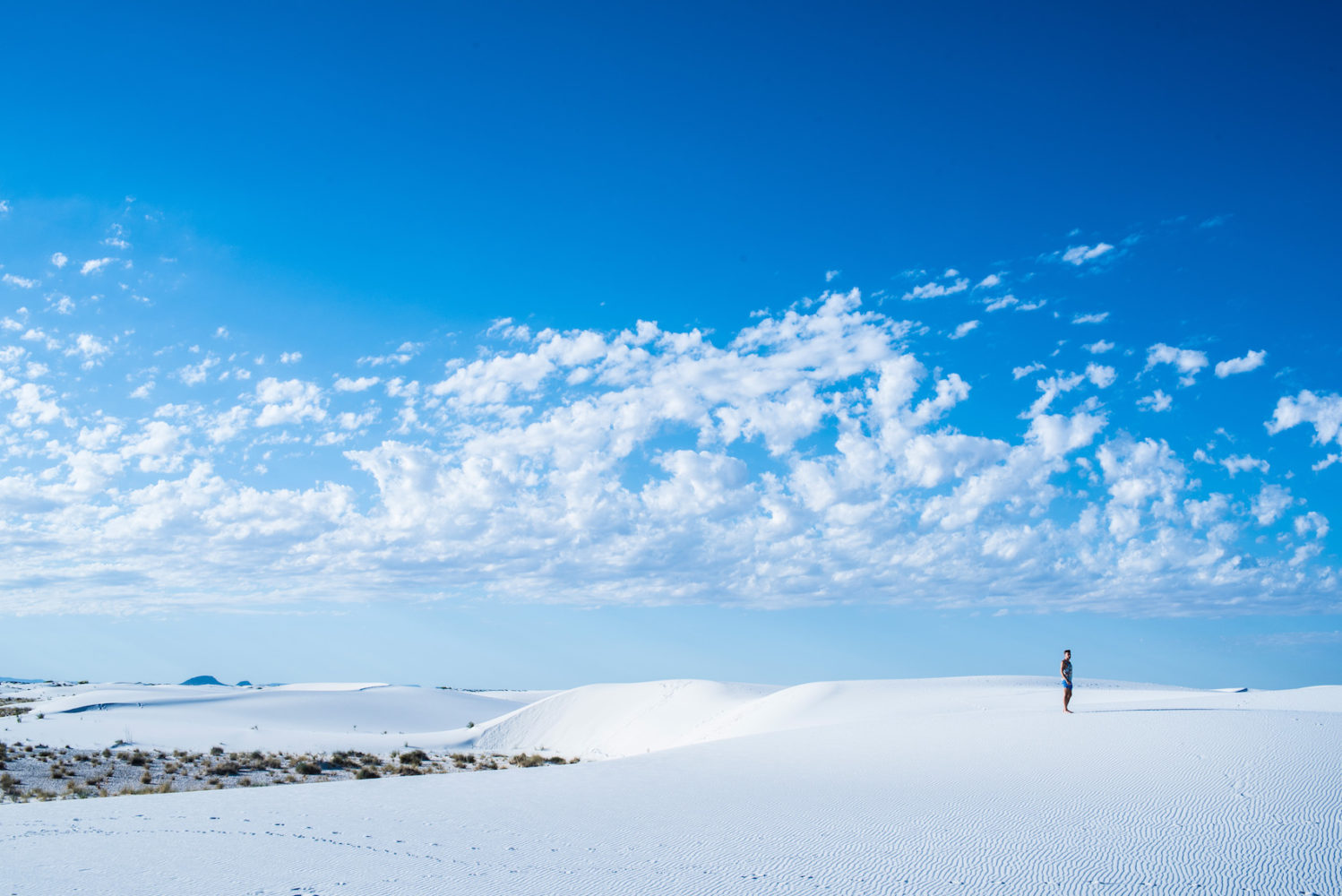 It was snowing the last time I drove through West Texas on I-10, which made me think I could avoid nostalgia this time—it’s July now, after all. The bugs are so thick in the night air this time of year, though, and they look so much like melted snowflakes do when they smoosh on the windshield. This past Friday could’ve been the same Friday I headed out of town the January before last.

At least, if I hadn’t woken up with him. We’ve been together all but a few of the past hundred or so mornings, but this one was different. I’ll just set a timer for 20 minutes, I laughed and laid back down on his chest, only to find myself awakened in what seemed like the same instant my eyes closed.

Saturday morning was different, too. When I woke up, the three of us—Danilo, myself and our friend Dora; and her dog Frankenstein, who I guess makes four—had just crossed the New Mexico state line, a fact I knew in spite of having discarded my disposable contacts before nodding off just before El Paso: When you cross into New Mexico from Texas, the air suddenly smells like cow shit.

“About 20 minutes,” Dora said, when I asked her how long I’d been asleep. But it felt like 20 eternities, I thought, and shuffled through my duffel bag to find my glasses. Or at least 20 months.

It had technically only been 18 months—exactly 18, to the day, since the last time I was on this road—but I was the only one counting. 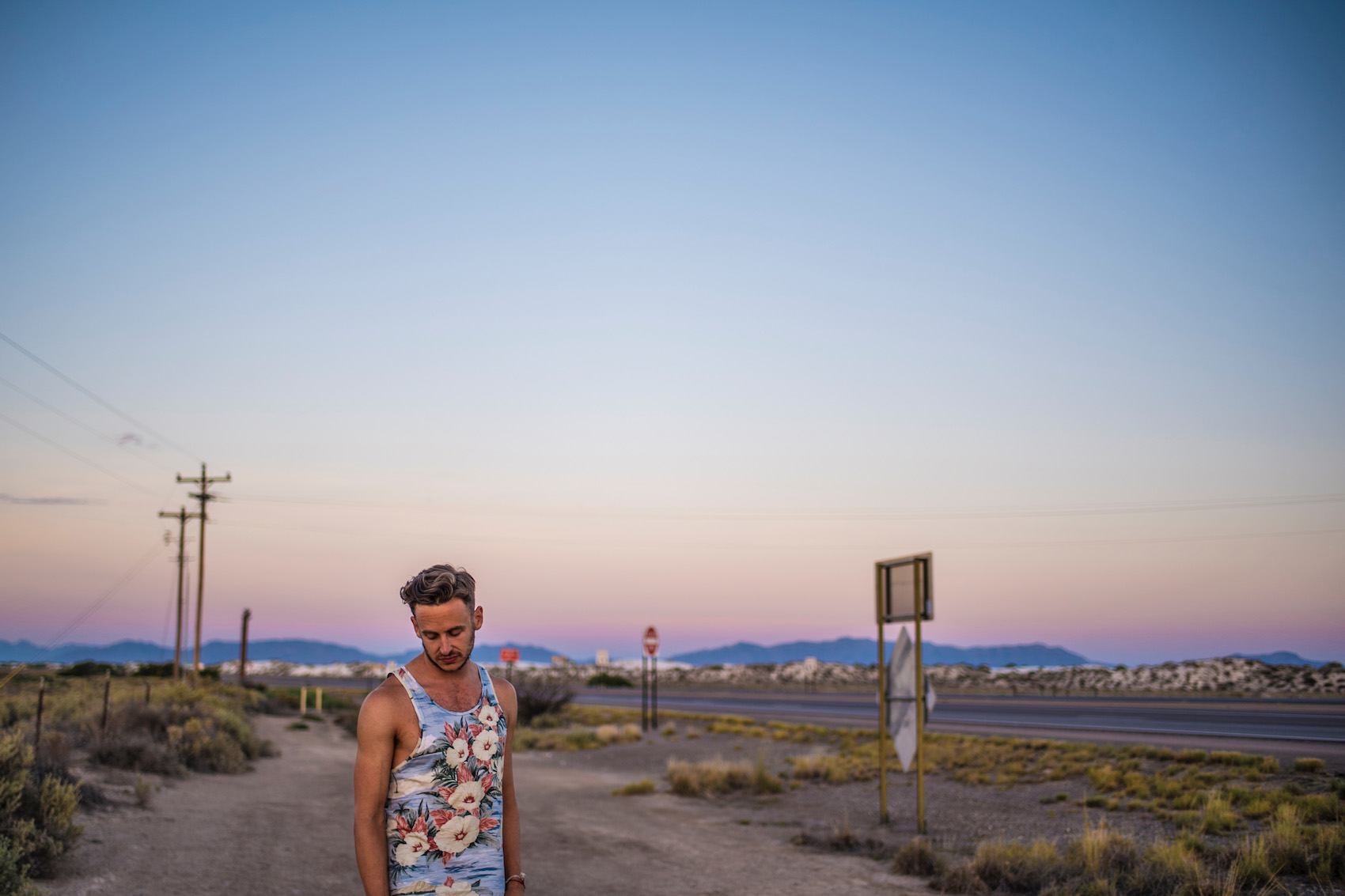 18 months ago, I’d been in a U-Haul (my friend Kim’s, not mine) and continued west on I-10; this time, Dora’s Mercedes headed north on I-25 and then east on New Mexico 70 toward Alamogordo. We arrived in the dead of night, on account of the fact that both of us have lead feet, so we parked across the highway from the barricaded entrance to White Sands National Monument to catch some extra z’s before heading inside.

Or at least Dora and Danilo did—I was waiting for the sun.

Not wanting the Houston Rockets shirt I was wearing to be immortalized in photos, I brought my duffel with me and rummaged through it in search of something more suitable. I eventually settled on a tank top a hibiscus or two shy of Hawaiian, but kept my bag outside a few minutes longer and admired how scientifically I’d packed it.

I miss doing this, I remembered thinking as I rolled my clothes the previous morning. I miss going far away.

Nothing takes very long in the desert, neither truth, nor death, nor sunrises, and so before I knew it the three of us (four if you count Frankenstein—we really should) were promenading through the snowy-looking dunes I’d first decided I wanted to visit upon seeing the music video for a mid-90s song about a relationship on the verge of ending.

Actually, Dora is the only one who deserves to use that verb, promenade. Her parasol seemed more befitting of Hanoi or Phnom Penh than Paris, this was true, but she could just as easily have been on La Grande Jatte in the Impressionist period as in a gypsum desert a stone’s throw from a missile testing site in the epilogue of the Atomic Era. Such grace! 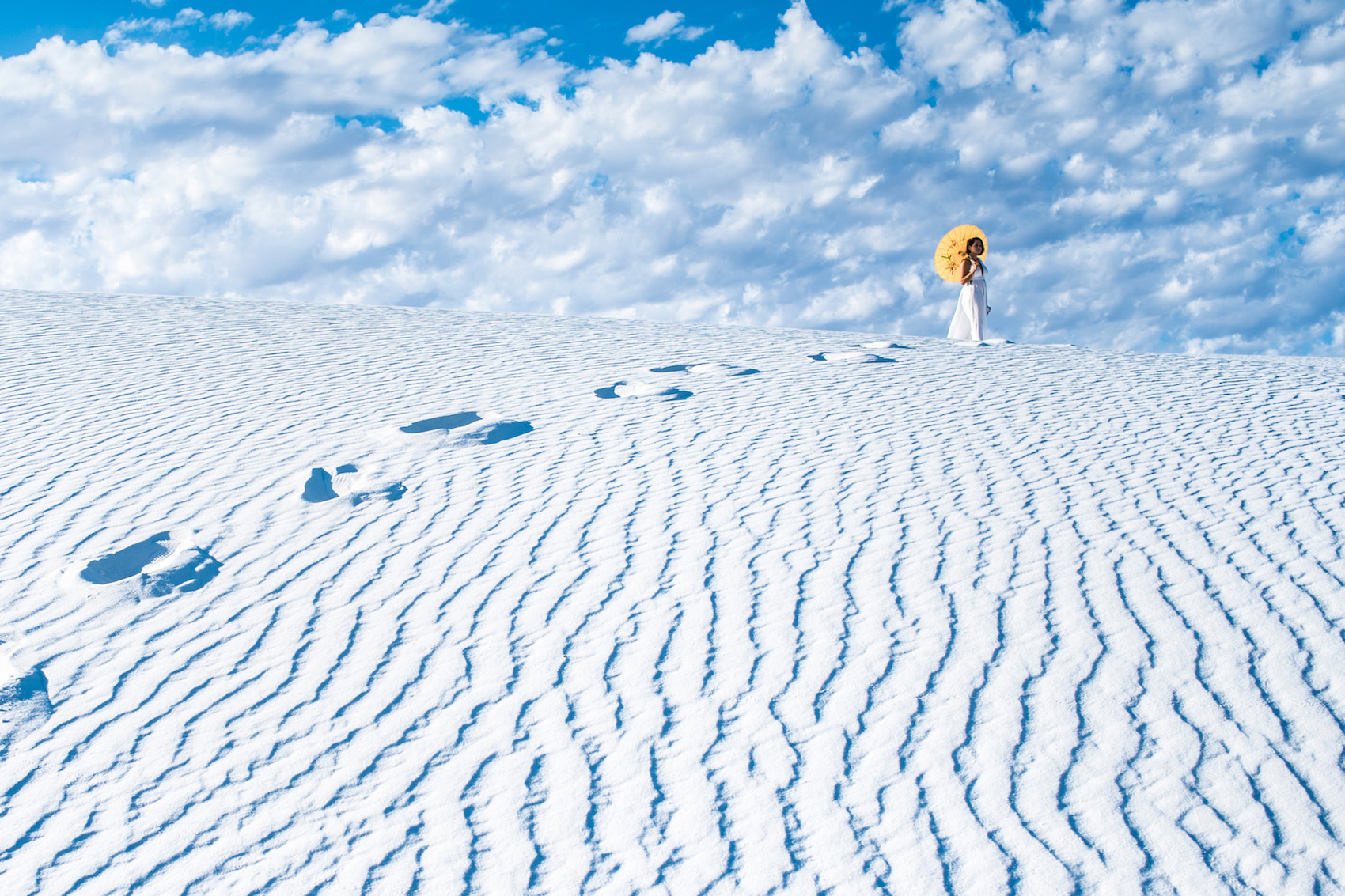 We only spent an hour or so in the sands—any longer and we’d’ve ended up as fried as the poor souls the nukes tested here end up getting dropped on. Then, it was my turn to get behind the wheel, and I drove us up into the Sacramento Mountains, where a New Mexico-native acquaintance of mine told me we could get a bird’s eye view of the desert.

My photos suggest this was true and I’ll have to take them for their thousands of words. Aside from kissing Danilo, watching a couple of yellow swallowtails dance and dine in a grove of milk thistle, waiting 30 minutes at the Walgreens in Ruidoso (I had to prove I wasn’t going to make meth out of the Sudafed I purchased) and a raucous “Bohemian Rhapsody” karaoke session somewhere near the junction of highways 54 and 285, I’ve forgotten everything about the drive to Santa Fe.

(Ascending a few thousand feet in a few minutes is never a good idea, but especially not when your sinus cavity is infected and you don’t know it yet.) 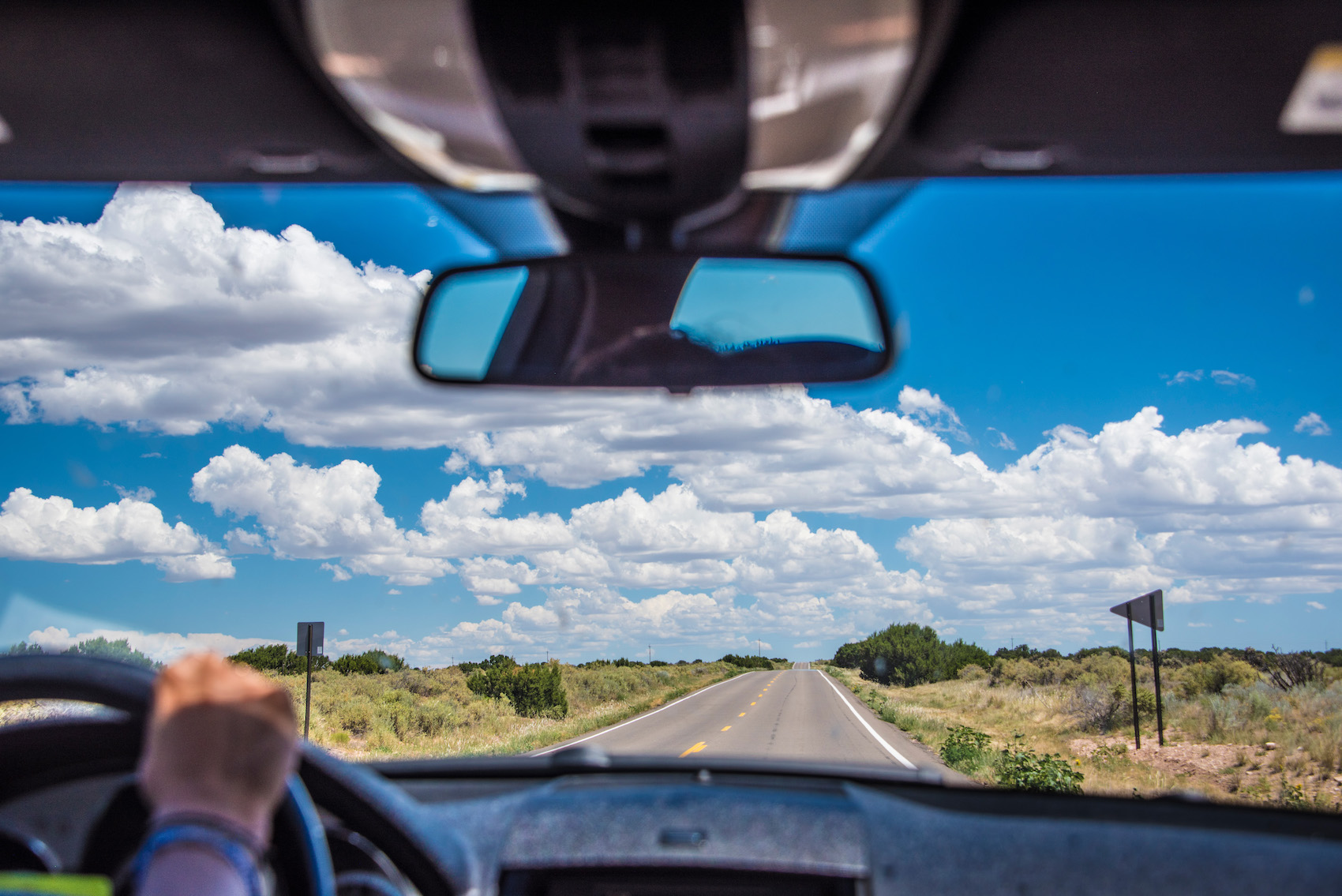 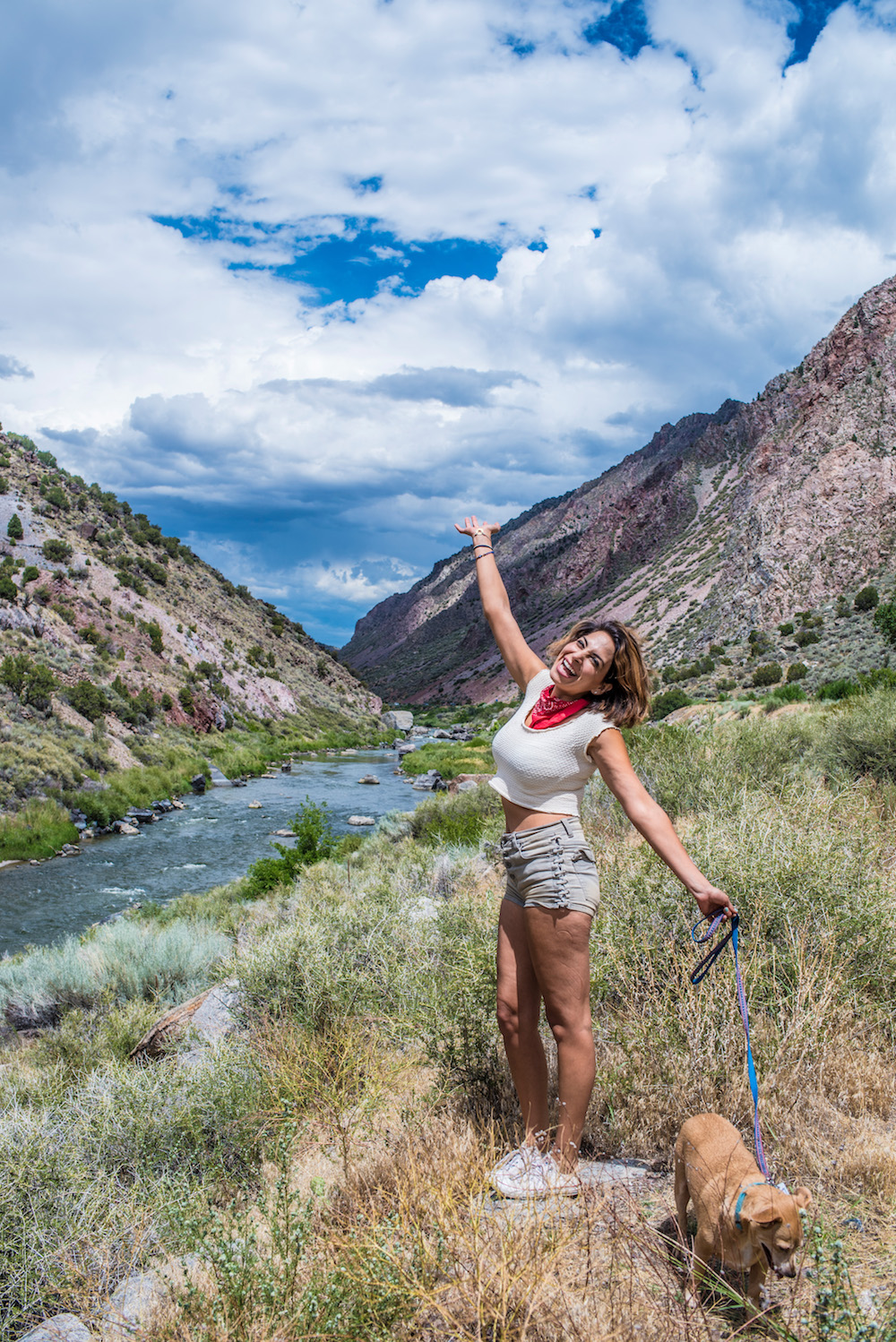 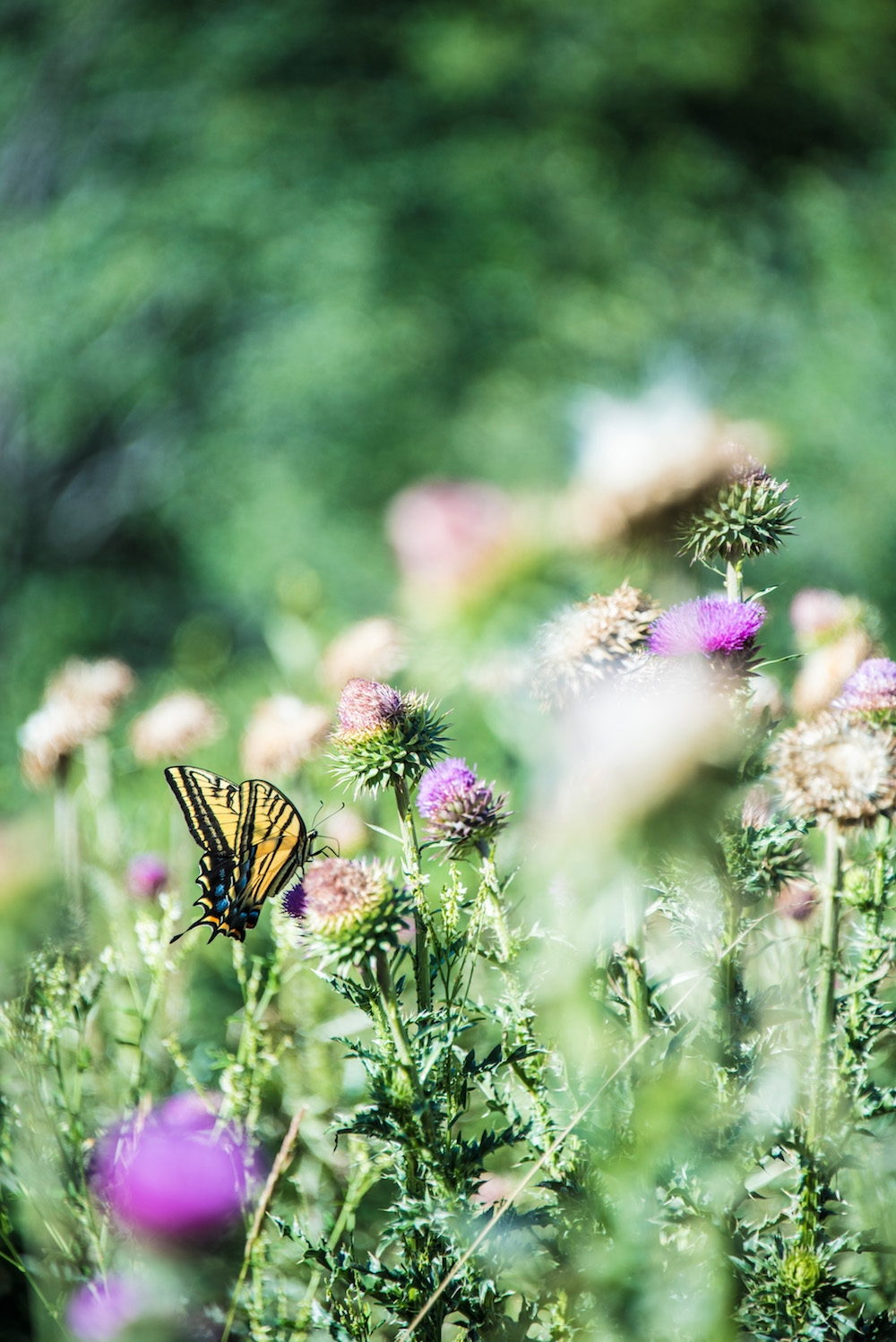 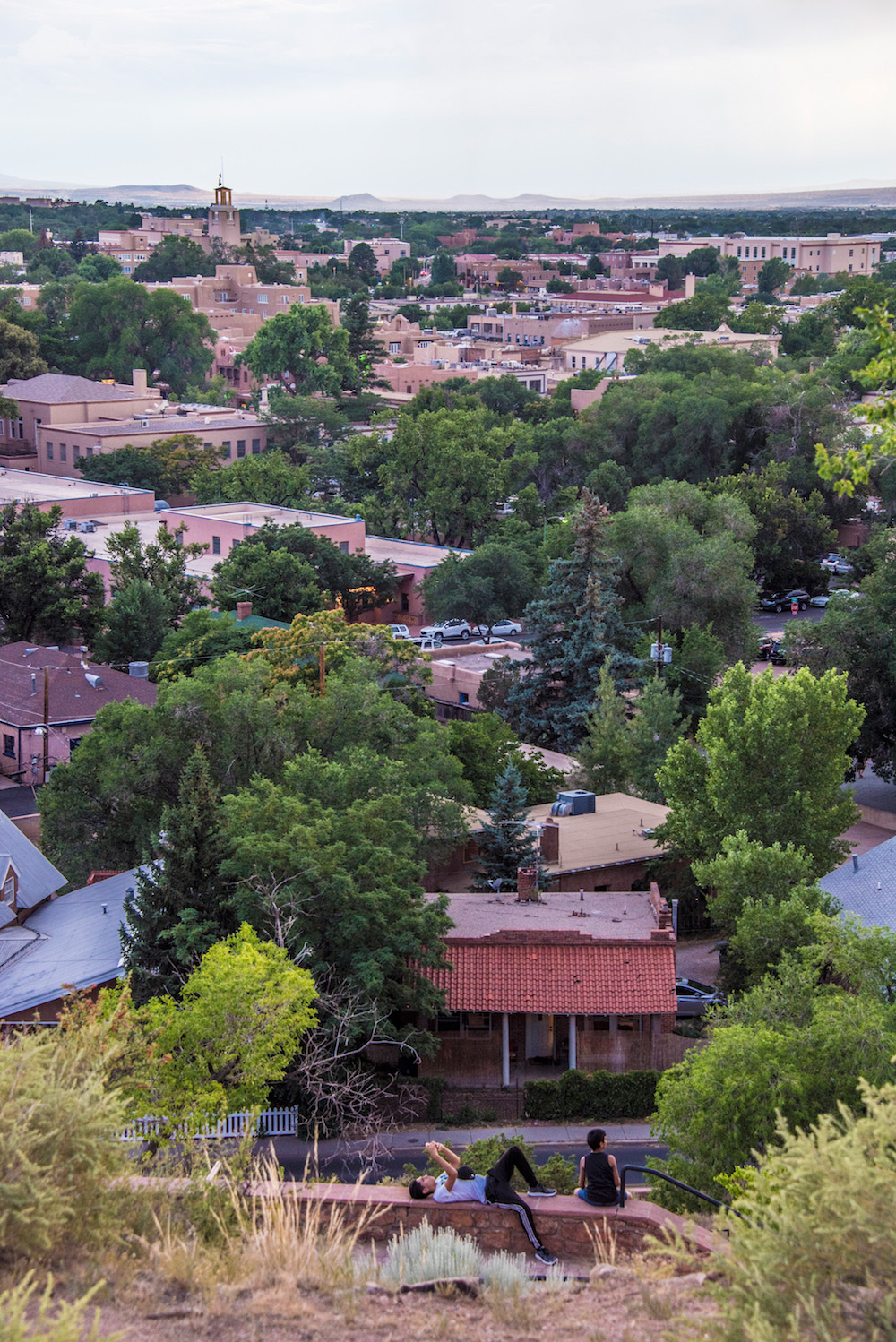 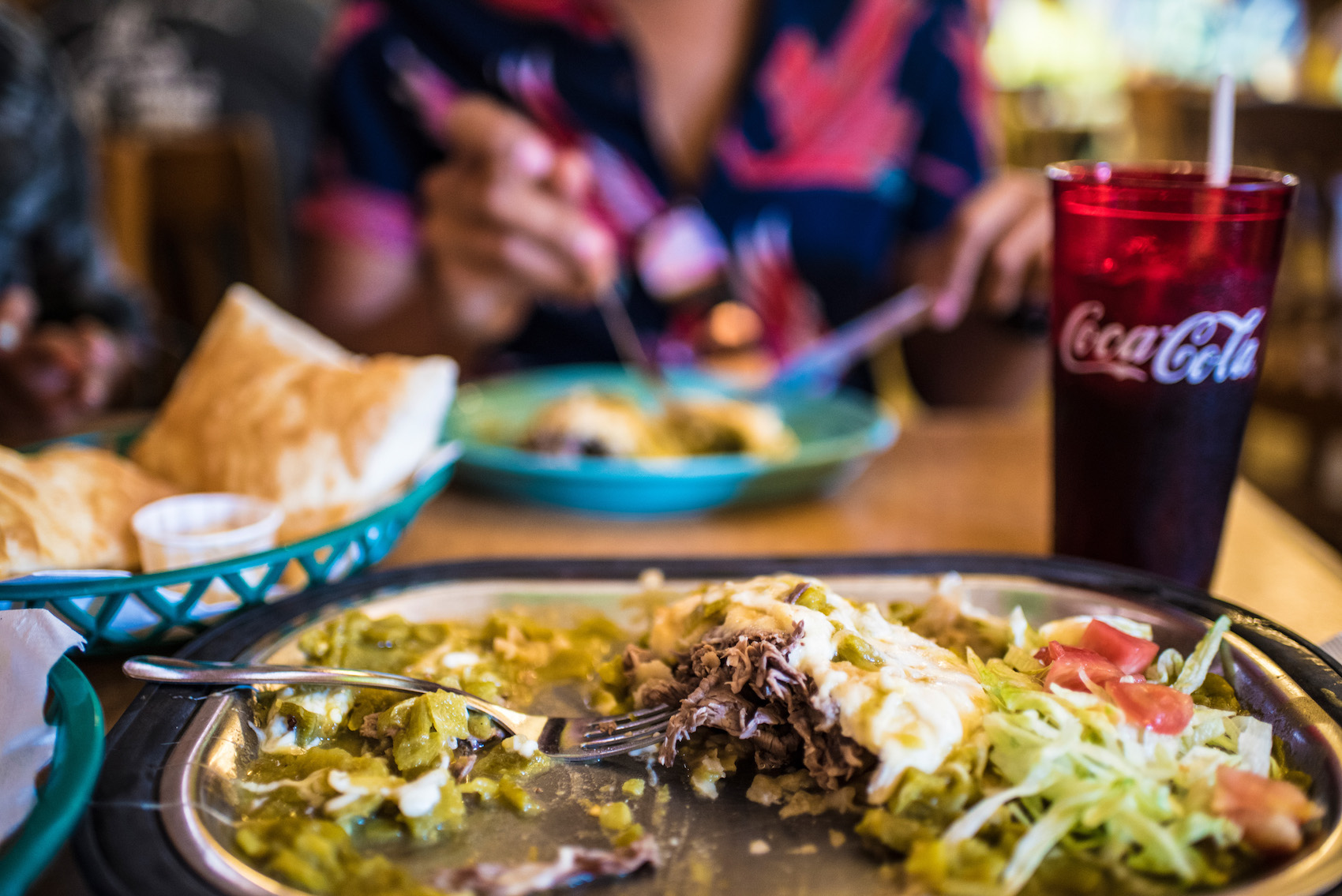 Santa Fe was miserable, if I’m honest, with only two exceptions (three actually, but I’ll get to the third in a minute): My first and second real sopapillas and my first legitimately impressive sunset of 2016.

“It’s because of the altitude,” Dora, who spent part of her childhood in New Mexico, said as we walked north on Guadalupe Street into downtown—and not to explain my continued respiratory misery. “Sopapillas are only sopapillas in New Mexico—they just don’t cook the right way near sea level.”

Santa Fe was miserable, in a way I found strangely similar to only one other city I’ve visited, a city clear on the other side of the planet: Yerevan, Armenia.

Both are among the oldest continuously inhabited cities in their catchment areas and both have been home to people who bear the scars of genocide, two facts that should, on their own, make them interesting in ways that nullify the misery sown into their streets.

But in fact, these cities are just miserably boring: Yerevan because nearly all of interesting architecture that must’ve once existed there was replaced by Soviet shit; Santa Fe because tacky reproductions of the building style that draws so many people here overshadow the few original structures that still stand. I guess that’s the same reason.

(Yes, I know I’m being superficial in the shadow of mass murder, but I’m sick enough at this point that death is preferable or at least comparable to being here.)

The saving grace of our late-day stroll was that eagle-eyed Danilo spotted a cross perched above the city. Although the climb up to it nearly killed the two of us (he was ill, too), the view it gave of the thunderstorm rolling in would’ve redeemed Santa Fe, had we not descended back down into its mediocrity before the setting sun painted its dark skies fuchsia at the very last minute. 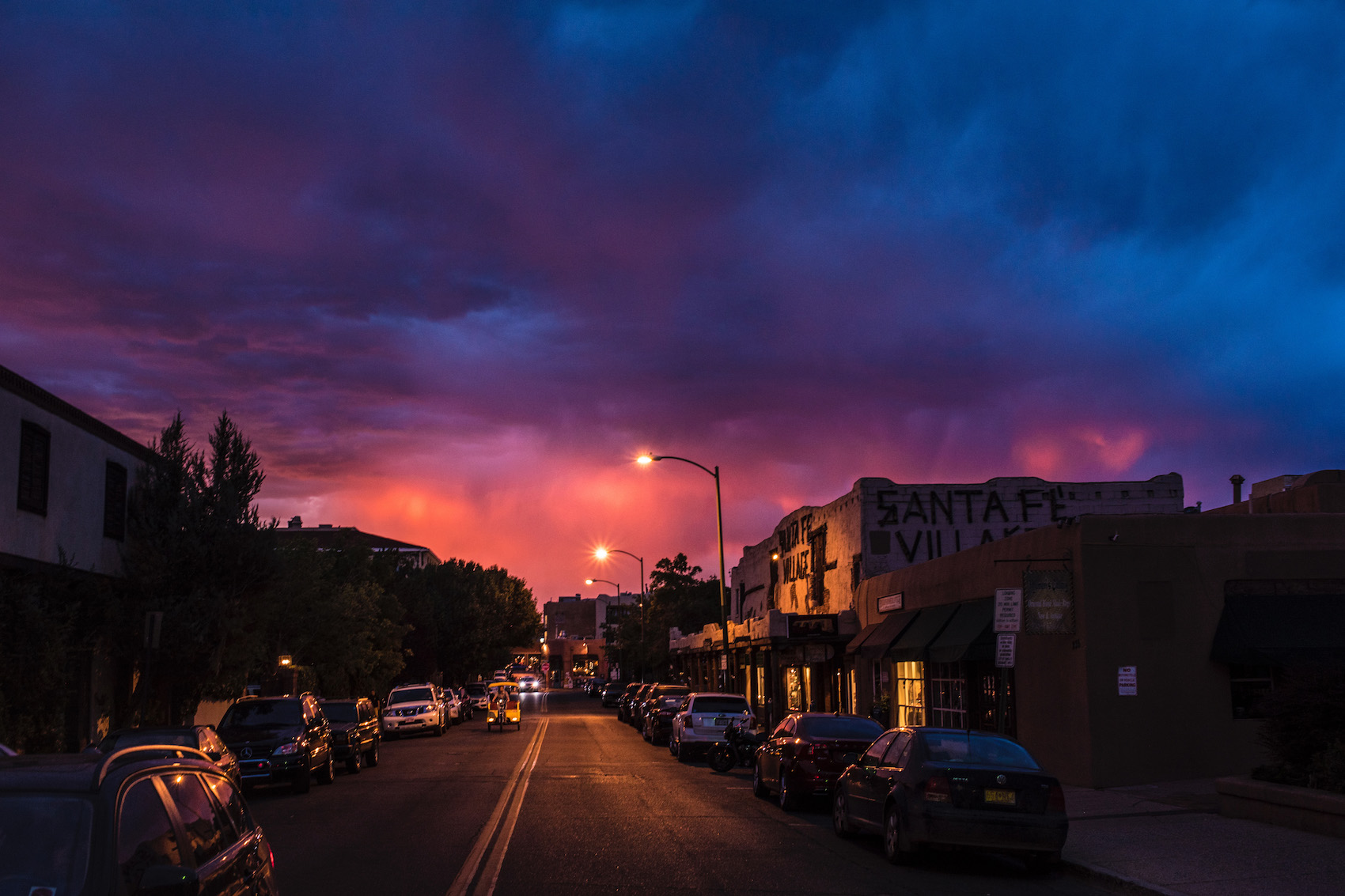 I can’t believe this almost didn’t happen, I thought as I laid with Danilo late that night, my hair greasy from the Vick’s Vapor Rub on his chest, the dream I was dreaming before getting up for the dozenth time to blow my nose trippy from the likely toxic combination of pharmaceuticals pumping through my system.

We’d almost broken up the previous Tuesday, and about a dozen times prior to that for dozens of different reasons, the most notable a subconscious (and inaccurate) resentment I harbored toward him: Our relationship was keeping me away from the more exciting reaches of the world. But something (and, agnostic as I am, I have to believe it was something bigger than us) kept us together, that time and all the others.

Just then, he woke up, almost as if he could hear my thoughts.

“It’s better than OK,” I said at full volume, which came out as a whisper due to my congestion. “The best, actually.”

He kissed my forehead and pressed me harder into him. His lack of verbal response was likely due more to the pain speaking would’ve caused him than anything else, but I like to think he knew that our sick slumber had made me happier than most of the trips I’d taken, excitingness notwithstanding. 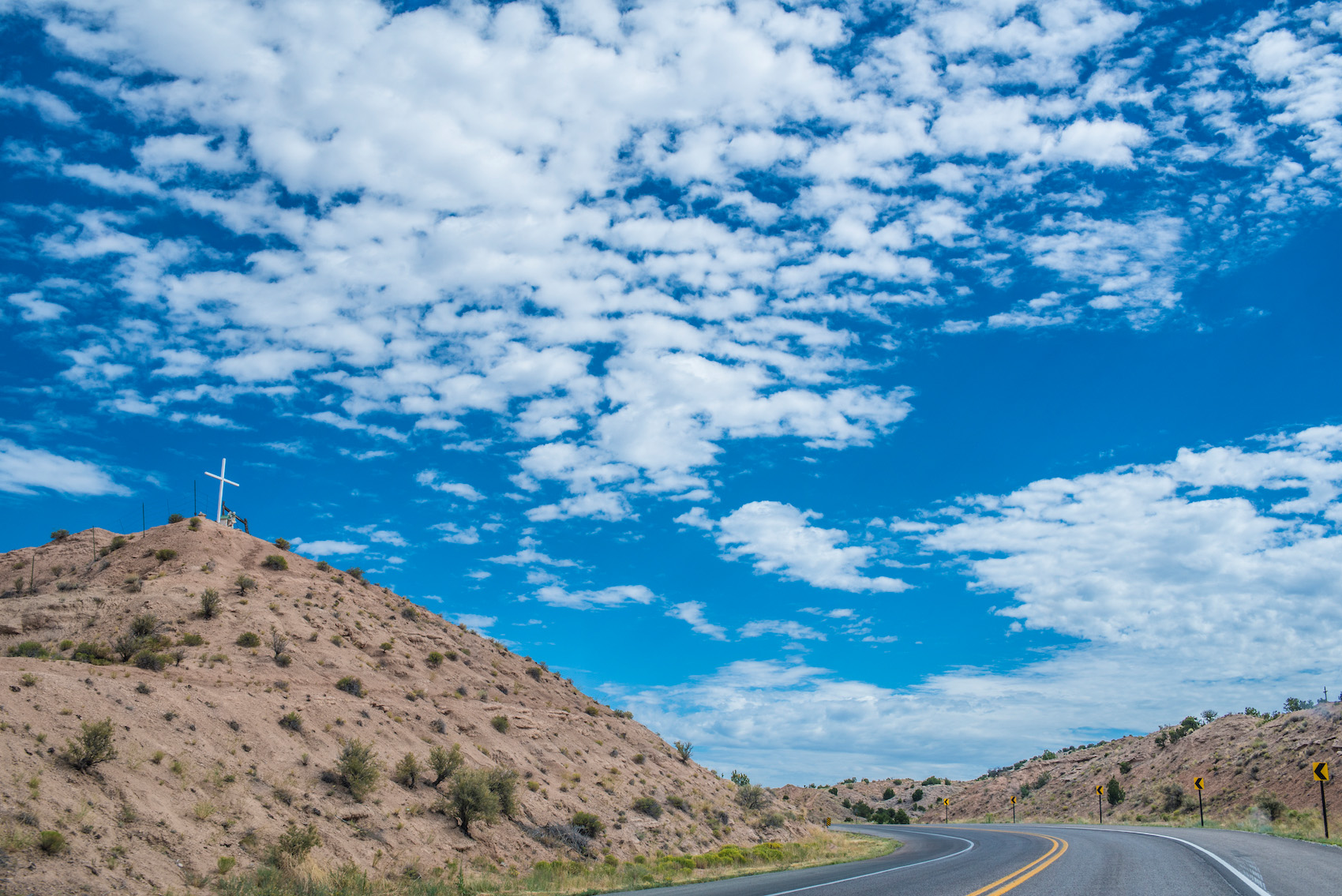 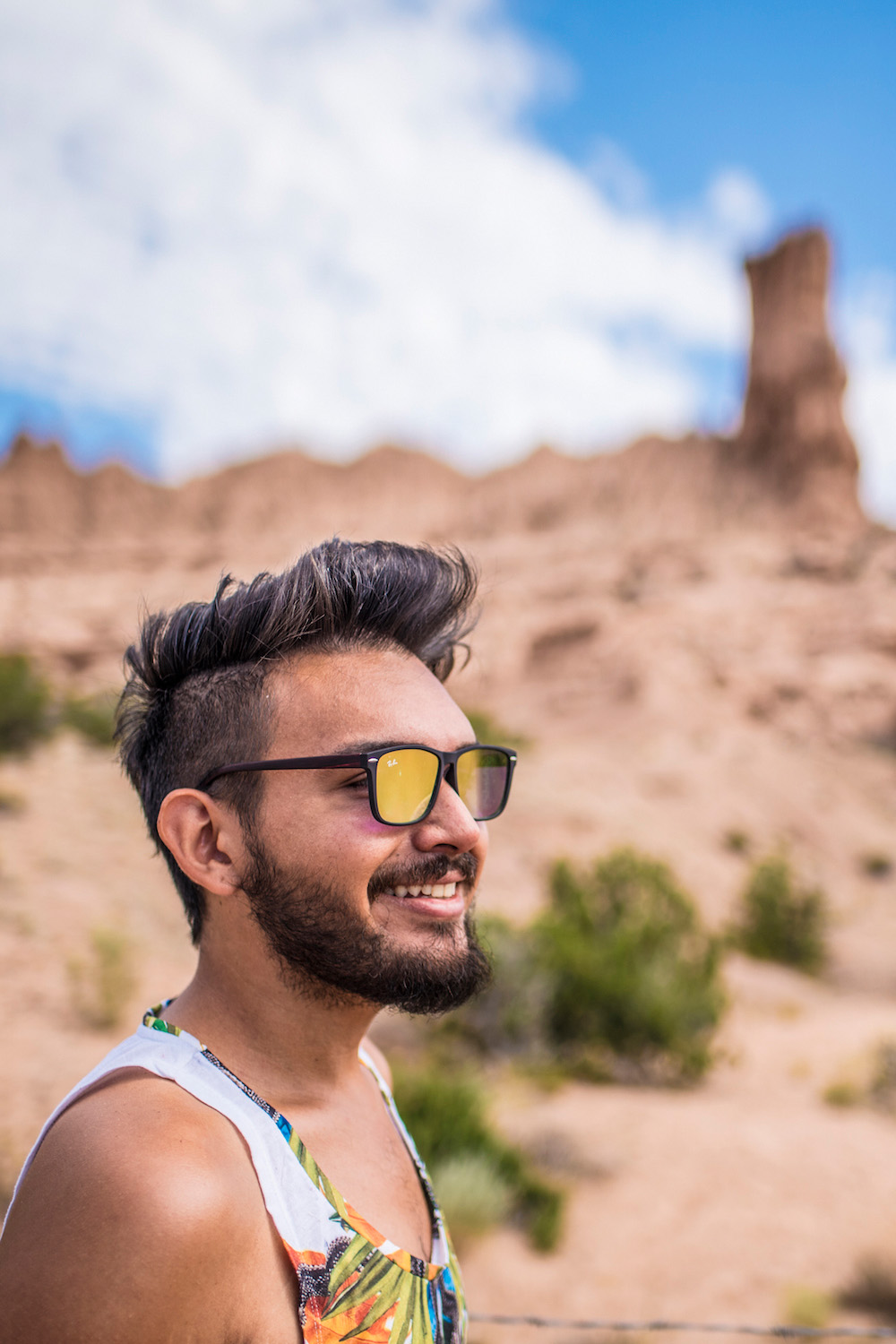 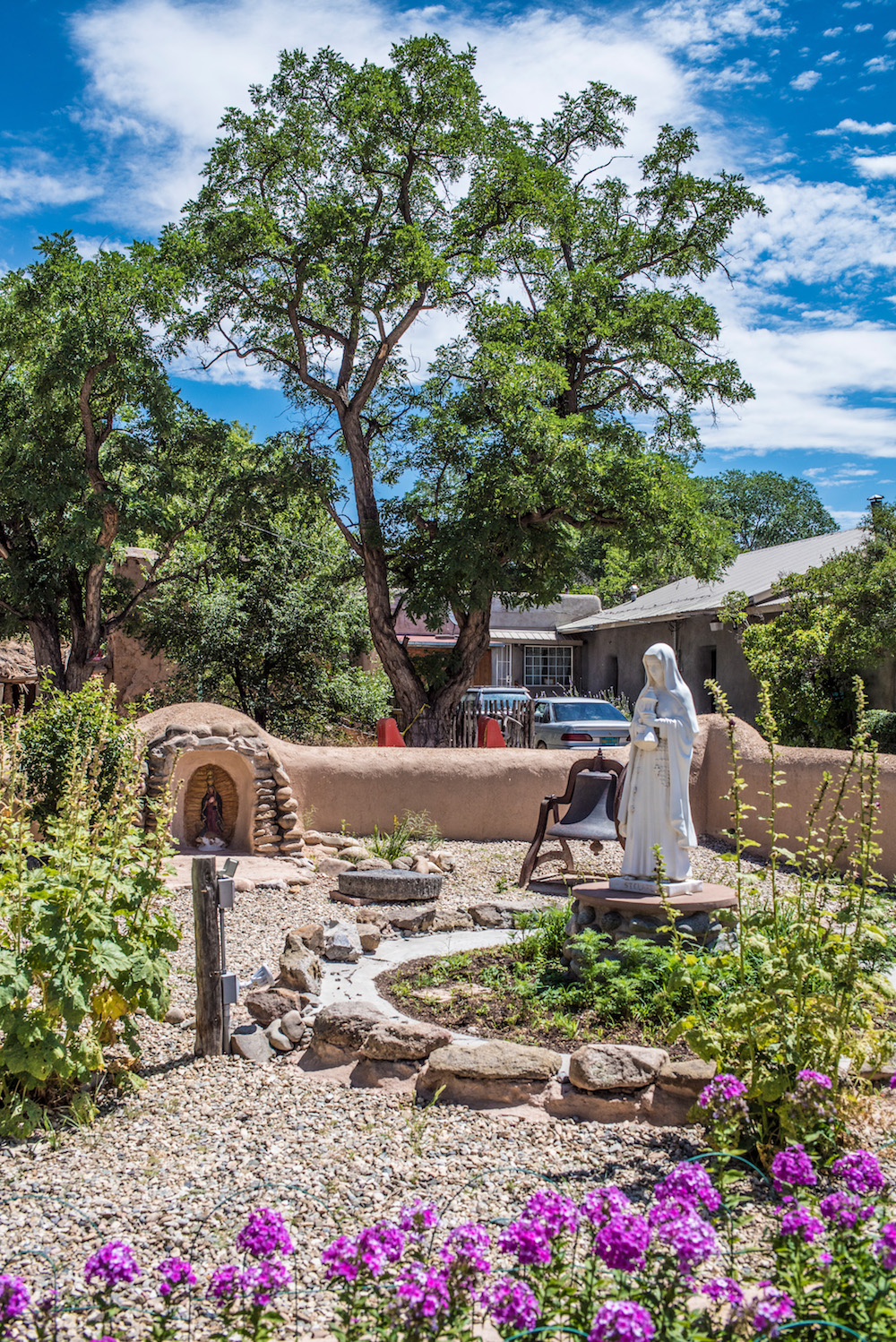 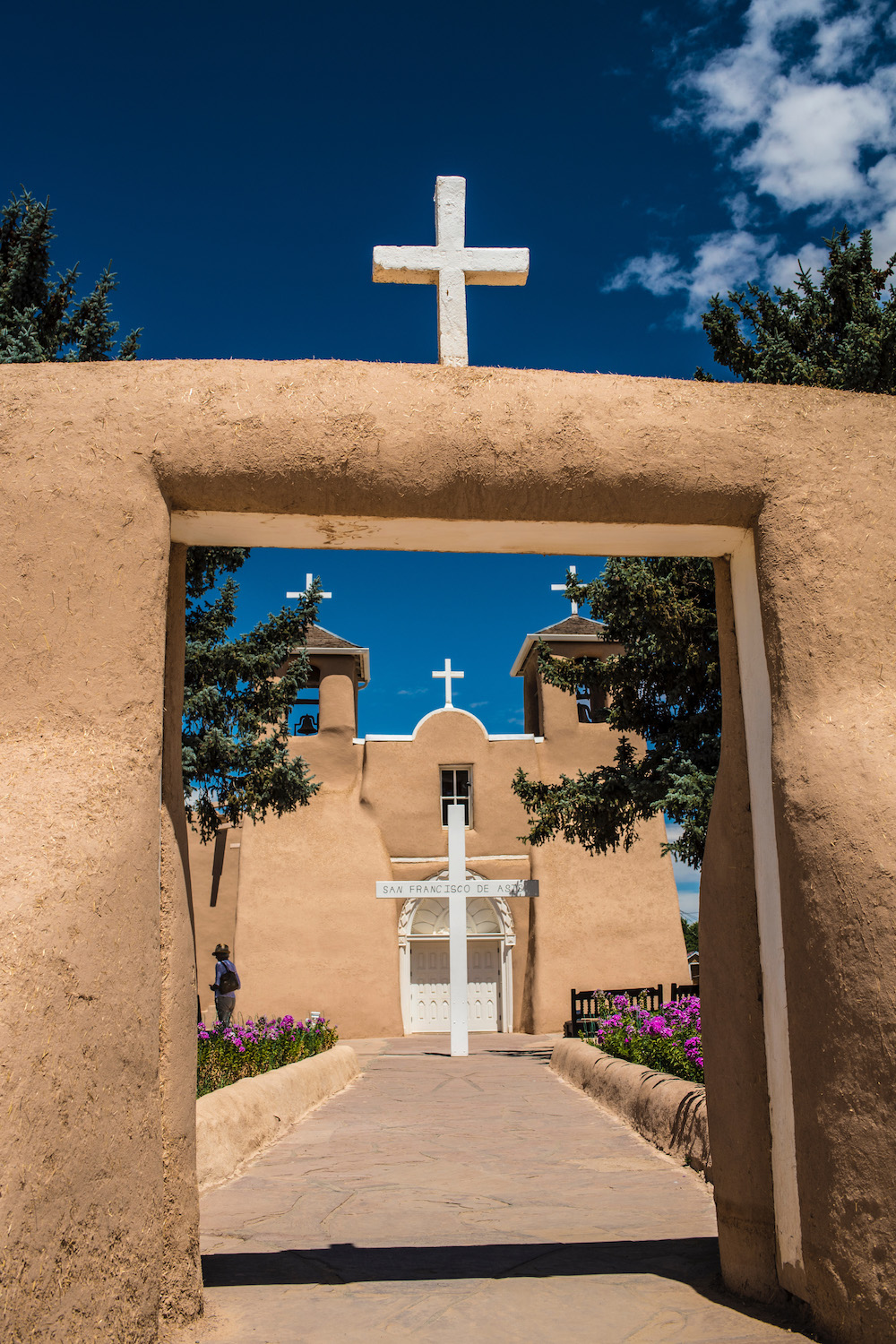 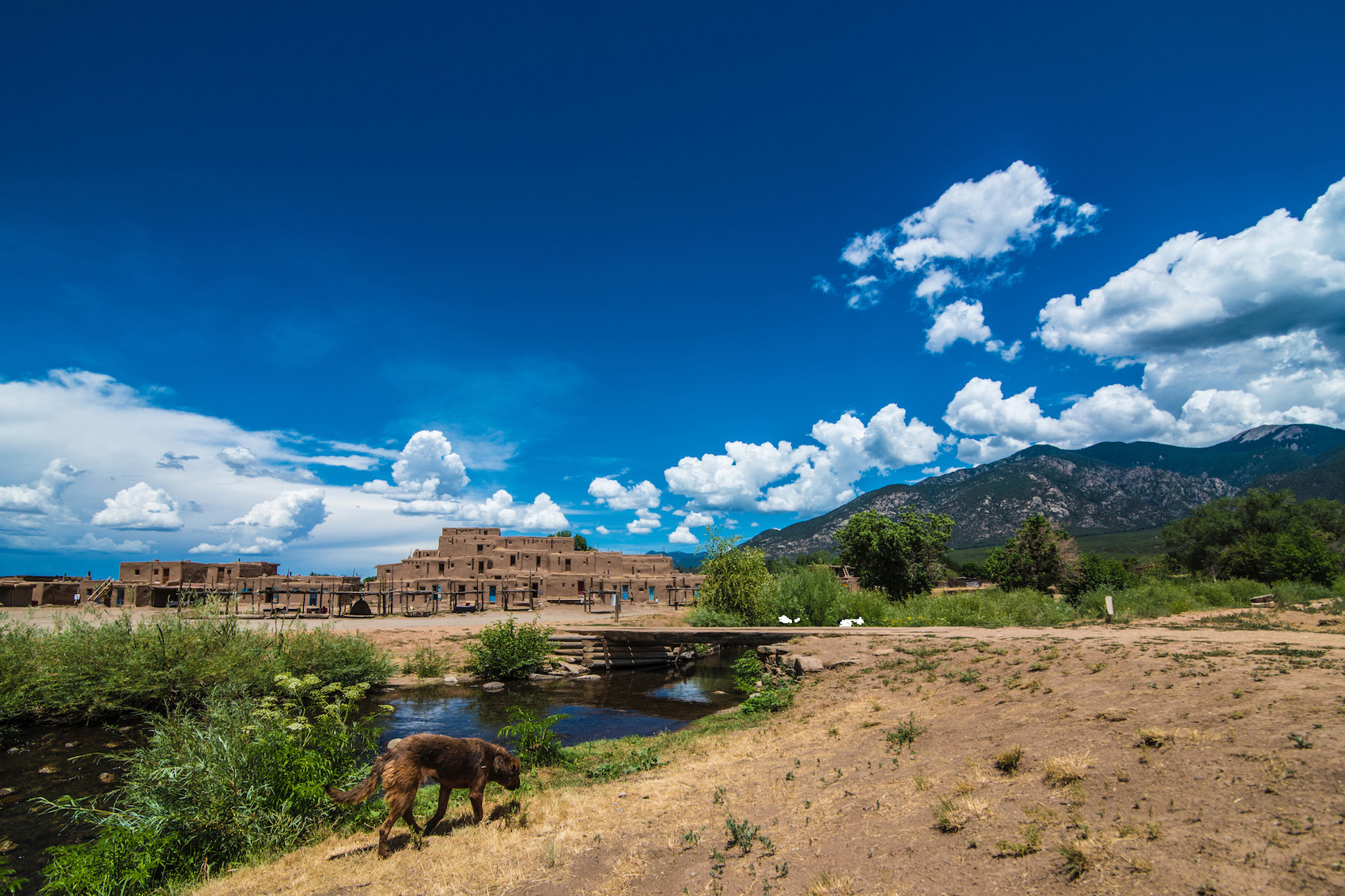 Four words pop into my head every time I think of the desert: “Aujourd’hui, maman est morte.” I realize today, of course, that much of the Algeria where Camus set L’Etranger was greener than New Mexico, but reading that book makes me feel like I have sand flowing through my veins.

(Location-wise, of course, Georgia O’Keefe would’ve been the appropriate art reference, but after having spent time in Santa Fe, I understand why she mostly painted vaginas.)

Had it just been me and Danilo in the car, I would’ve been blasting Tori Amos’ seminal 1994 album Under the Pink as we drove the aptly-named High Road to Taos, where that record was written and put to tape. Dora hates Tori’s music, however, so I sang silently as we passed the missions that lined the highway hillsides.

Taos itself was beautiful, if unremarkable, aside from the shouting match I got into with the “native” man (Danilo swears he was just Mexican) who exploded at me for supposedly taking a picture inside his shitty mud hut. As we headed south and into another sleepless night of driving through West Texas, the scenery contrasted dramatically with the experience I’d had in the inhabited portions of the so-called Land of Enchantment, which had mostly been soul-depleting.

This is the perfect occasion for quoting Camus, of course, who has a way of conflating soul depletion and self-actualization. “There is no love of life,” he once wrote in an essay arguing the necessity of travel in one’s pursuit of happiness, “without despair of life.” 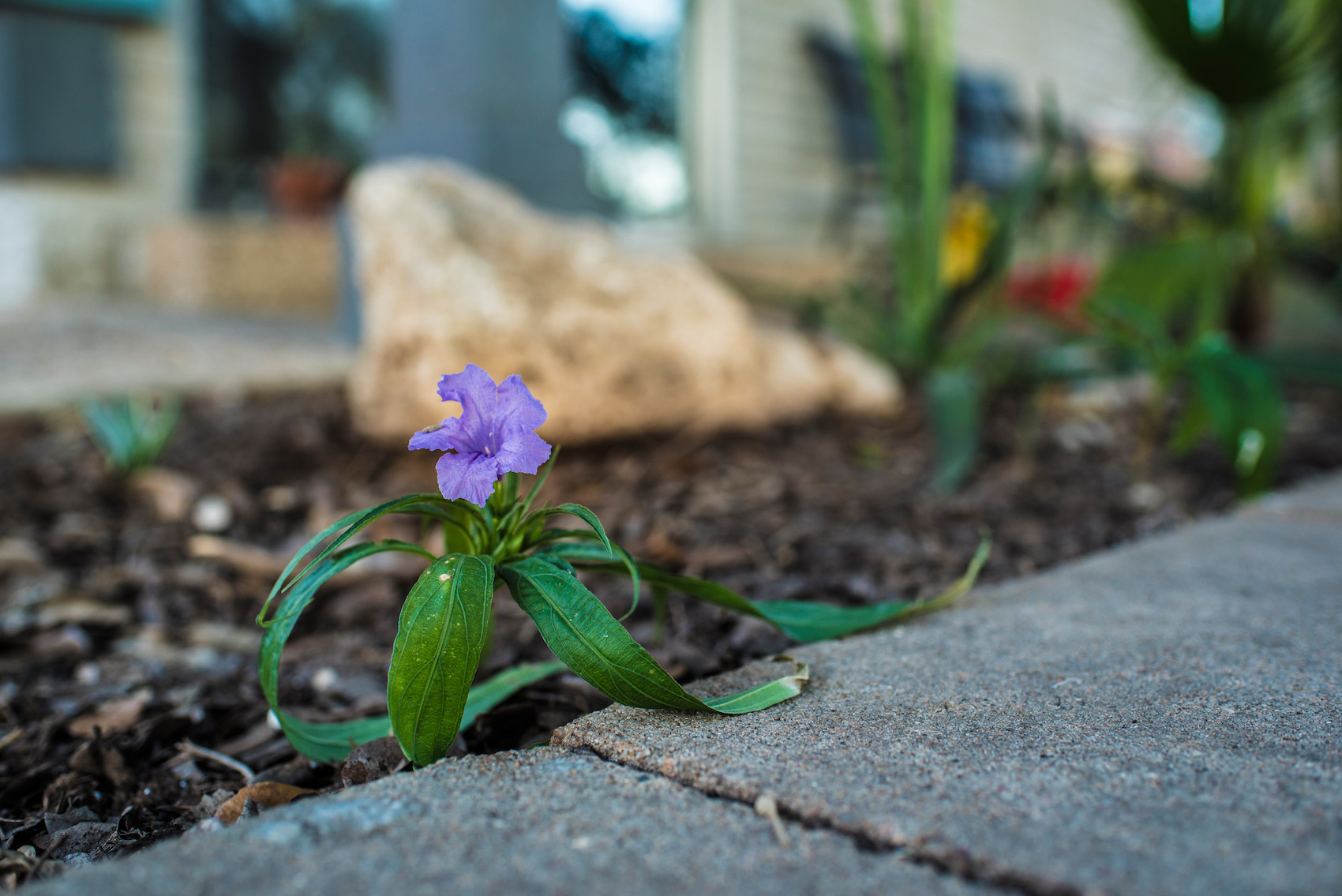 I arrived home to Austin feeling physically health, but as emotionally neutral about my trip as the color of the sky, a blinding white almost as bleached as the dunes of White Sands. The bleakness permeated the entire air, land and waterfront my apartment sits along, which is why I imagine the purple blossom emerging from our previously barren garden stood out so starkly.

Danilo and I had killed most of what was in it—deliberately—when we weeded it upon my return from my ill-fated Malaysia trip, discarding everything apart from three massive succulents and a large ruellia we split into five smaller ones, whose roots had grown long enough to transplant just before we set off to New Mexico, after our most recent of many near break-ups.

We considered explaining to Dora why such a seemingly quotidian sight (ruellia grow literally everywhere around these parts) brought both of us so close to tears, but only the way Danilo squeezed my hand in his could tell the story the right way.

Instead, I simply asked for her help. “Please don’t let Frankenstein piss on that flower!”