I began my journey to Azerbaijan with mixed emotions—and no idea of how many days in Baku I should spend. On one hand, I felt energized and exhilarated by the time I’d spent in Georgia. Tbilisi proved as worthy a destination as most places I’d been in mainland Europe, while Kazbegi allowed me to have the experience someone at my income level never could in more exclusive mountain ranges around the world. My Baku itinerary was a bit lacking, however.

Indeed, I wasn’t really headed to Azerbaijan—I was just headed to Baku, on account of both poor infrastructure in the Caucasus and my failure to admit just how poor it was as I planned my over-ambitious trip. No Qax, no Sheki, just a short Baku itinerary—two days—which to be fair would prove to be showcase one of the most interesting places I’d ever visited.

Need help planning your trip to the Caucasus? Hire me as your Travel Coach!
Contents
1  Where to Stay in Baku
2  How to Divide Your Time in Baku
2.1  My Bizarre Baku Itinerary: the tl;dr Version
2.2  Of Flames and maidens
2.3  Looking for a savior
3  Azerbaijan—and the Caucasus—Beyond Baku
4  Other FAQ About Visiting Baku
4.1  How many days do you need in Baku?
4.2  Is Baku worth visiting?
4.3  Why is Baku famous?
5  The Bottom Line

Where to Stay in Baku

Another thing that deflated my excitement about visiting Azerbaijan was its anticipated cost. To be sure, if you’re wondering “is Baku expensive or not?”, you needn’t look further than prices of accommodation in Baku. While they’ve gone down since my visit—there are now plenty of hostels in Baku, including the fantastic Freedom Hostel—hotels in Baku will generally run you prices commensurate with mainland Europe.

Some travelers will stay simple properties like Two Seasons Boutique Hotel Baku while others will choose legitimately five-star ones such as Winter Park Hotel Baku. Two days in Baku cost me as much as a week in Georgia—and I can’t lie that accommodations costs were a big part of why.

How to Divide Your Time in Baku

Whether you don’t have time to read this entire post, or are simply looking for information on Baku attractions on the go, here are the most popular things to do in Baku:

Staying longer? There’s plenty more Baku sightseeing to enjoy, some of which I’ll discuss in the next few paragraphs.

Of Flames and maidens

It didn’t take a lot of Baku travel advice for me to realize that the city’s Flame Towers should be a top priority during my 48 hours in the city. I traveled on an overnight train, however, which meant that I arrived early in the morning. After checking in to my hotel, I thus headed straight toward a Baku tower less-dependent on lighting to look amazing: Maiden Tower, a 12th-century monument that’s the de-facto entrance to Baku’s Old City. (NOTE: If you’r here during the summer, prepare to roast thanks to how hot the Baku climate tends to be!)

Other highlights during my Baku City Tour included a lunchtime stroll through Baku Seaside Park (a.k.a. The Boulevard) and a pre-sunset walk along the Caspian Sea, which eventually led me back to the aforementioned Flame Tower. They looked incredibly beautiful at night, surreal even, in spite of the fact that they’re not so tall (about 200m or 600′), much shorter than the now-canceled Azerbaijan Tower, which would’ve been among my favorite Baku images if I’d ever had the opportunity to photograph it. 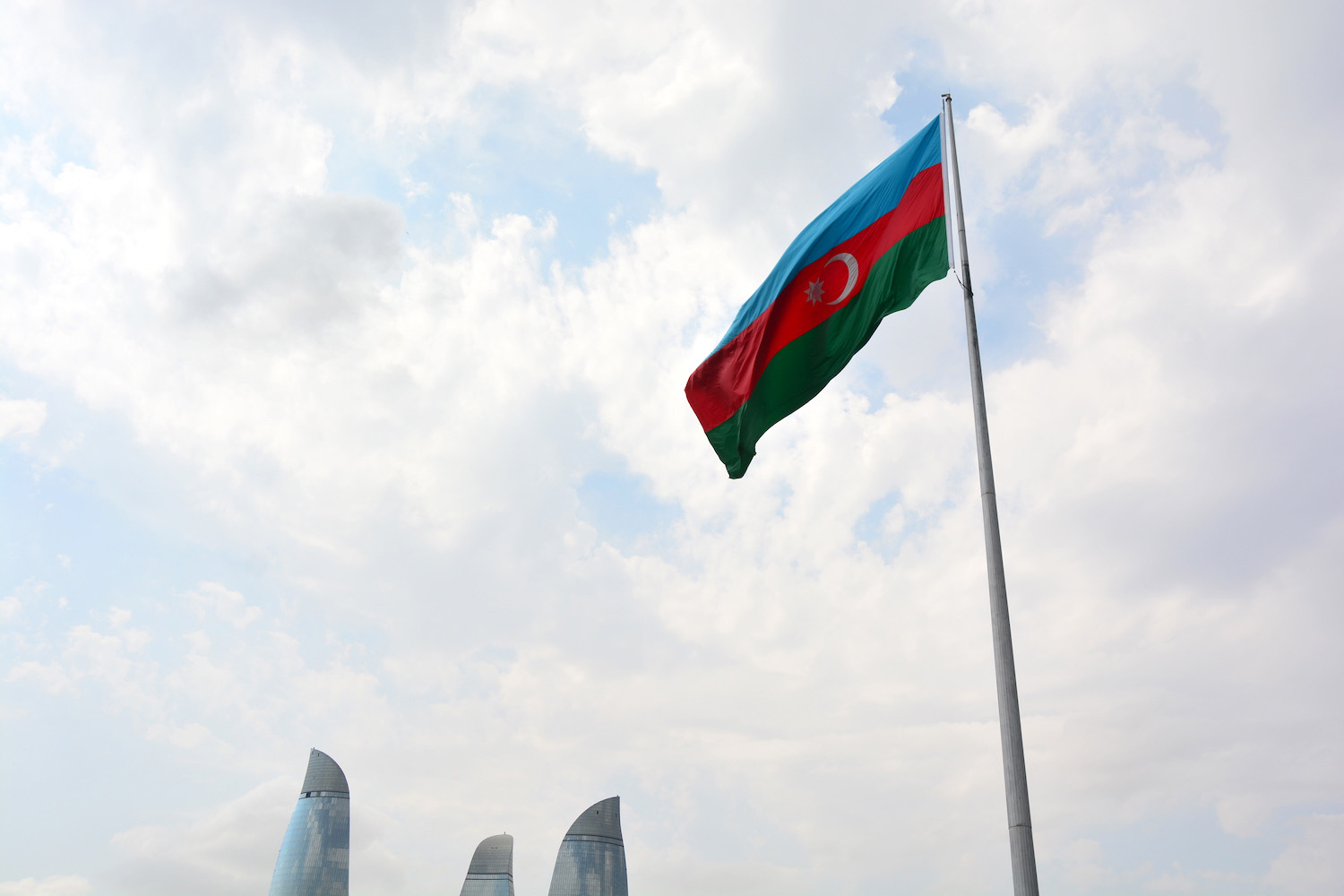 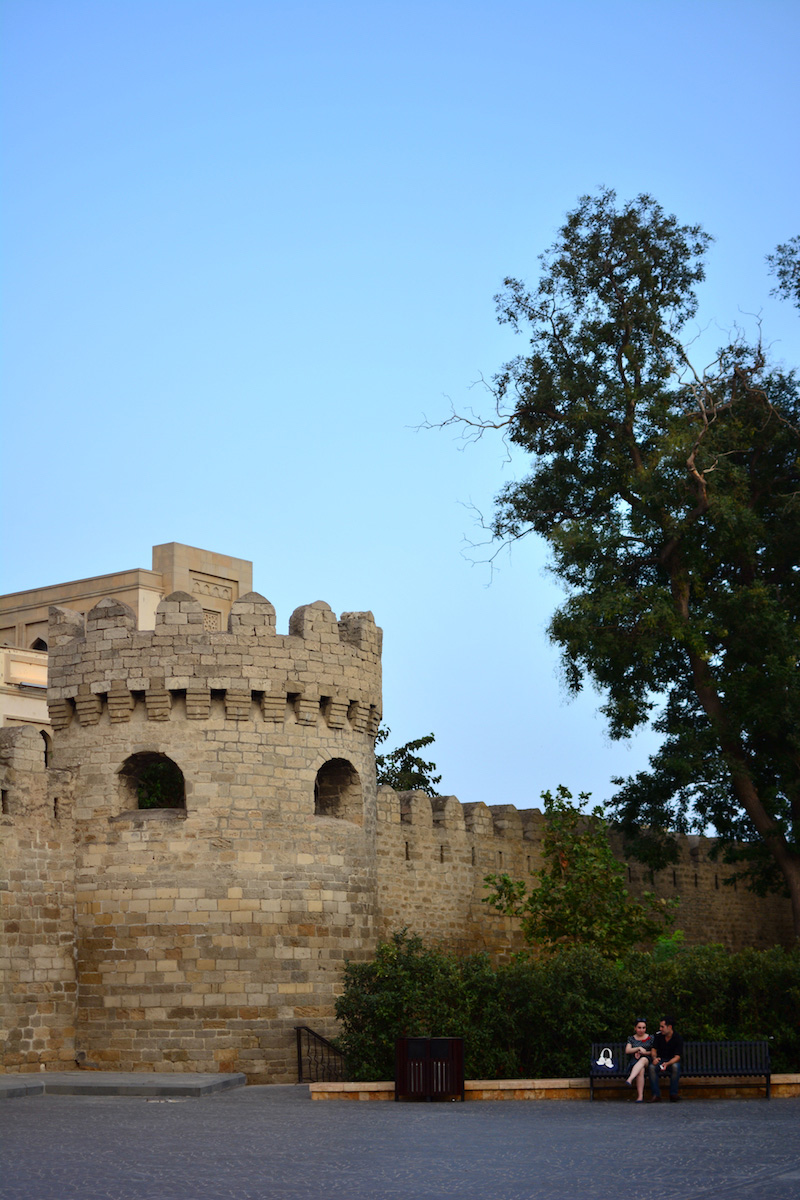 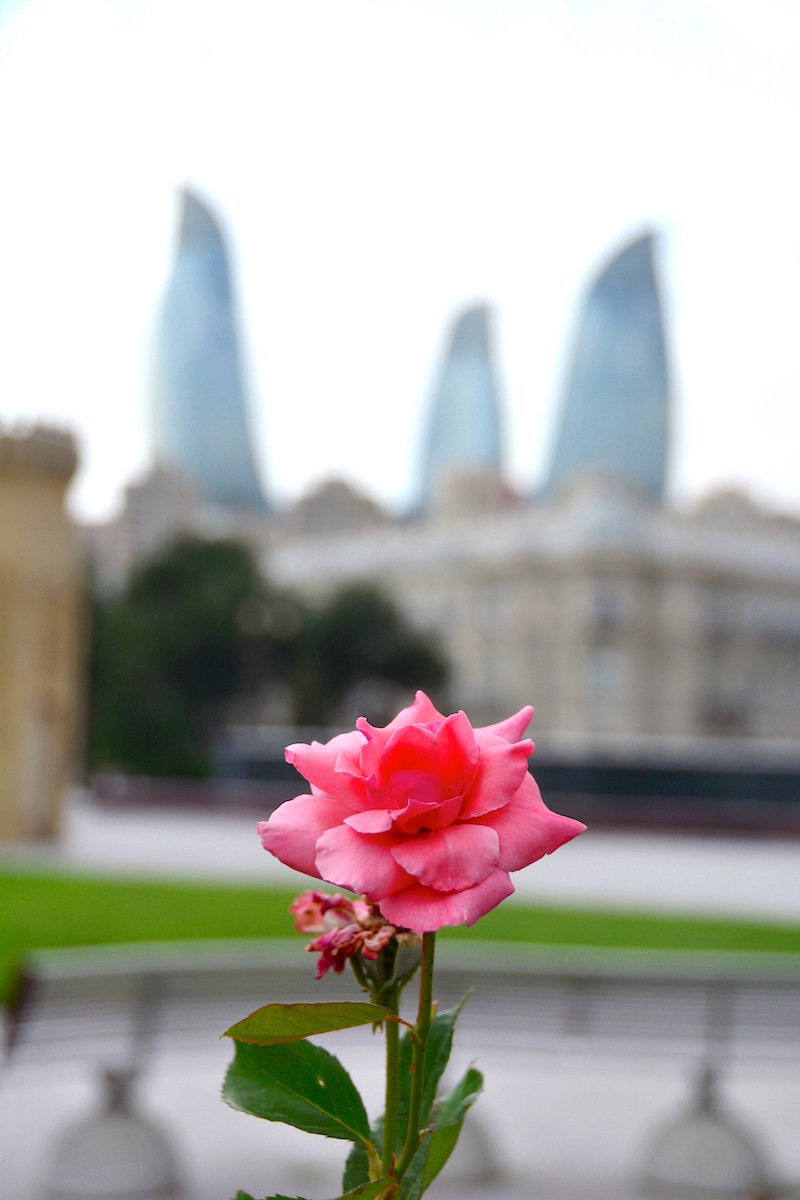 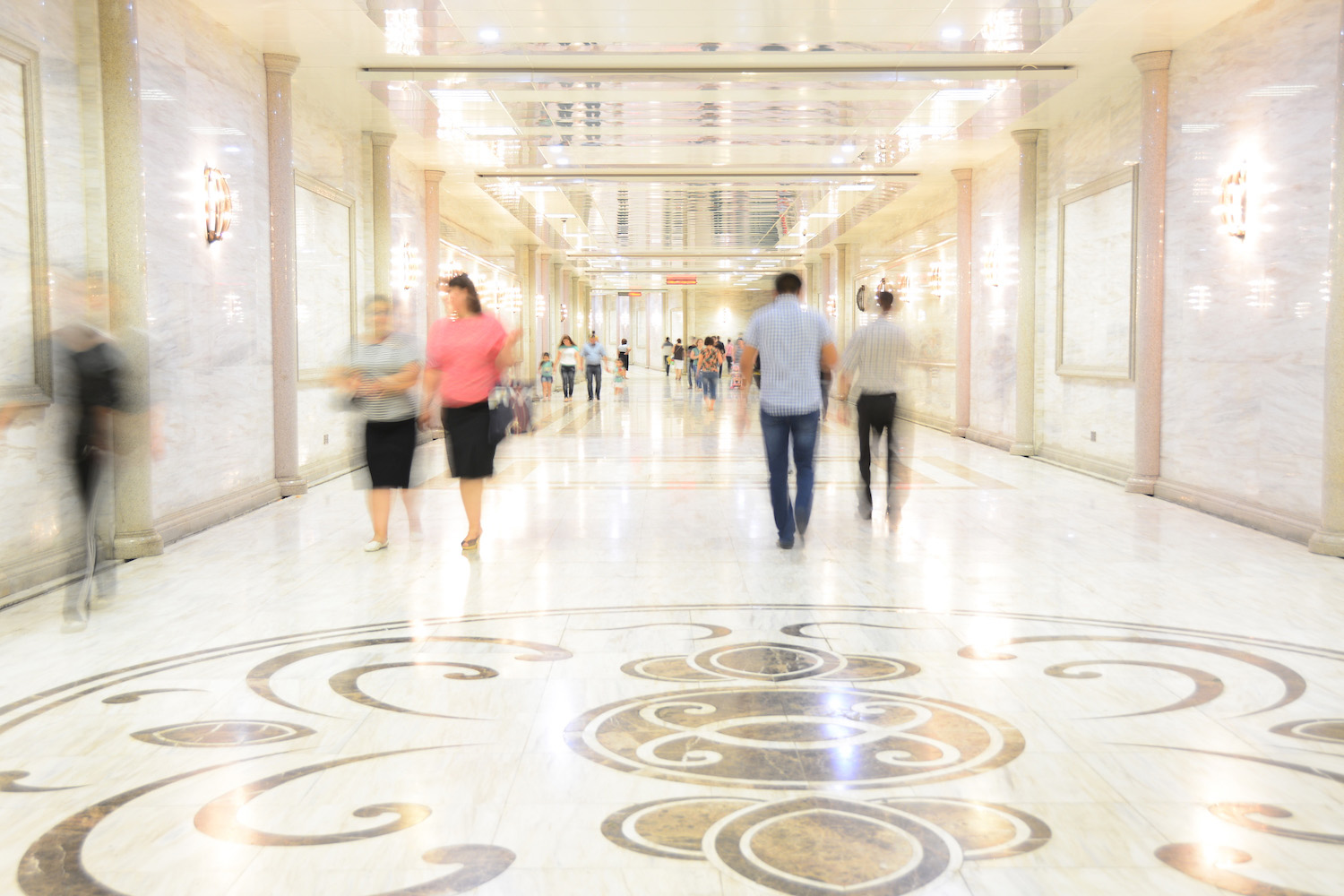 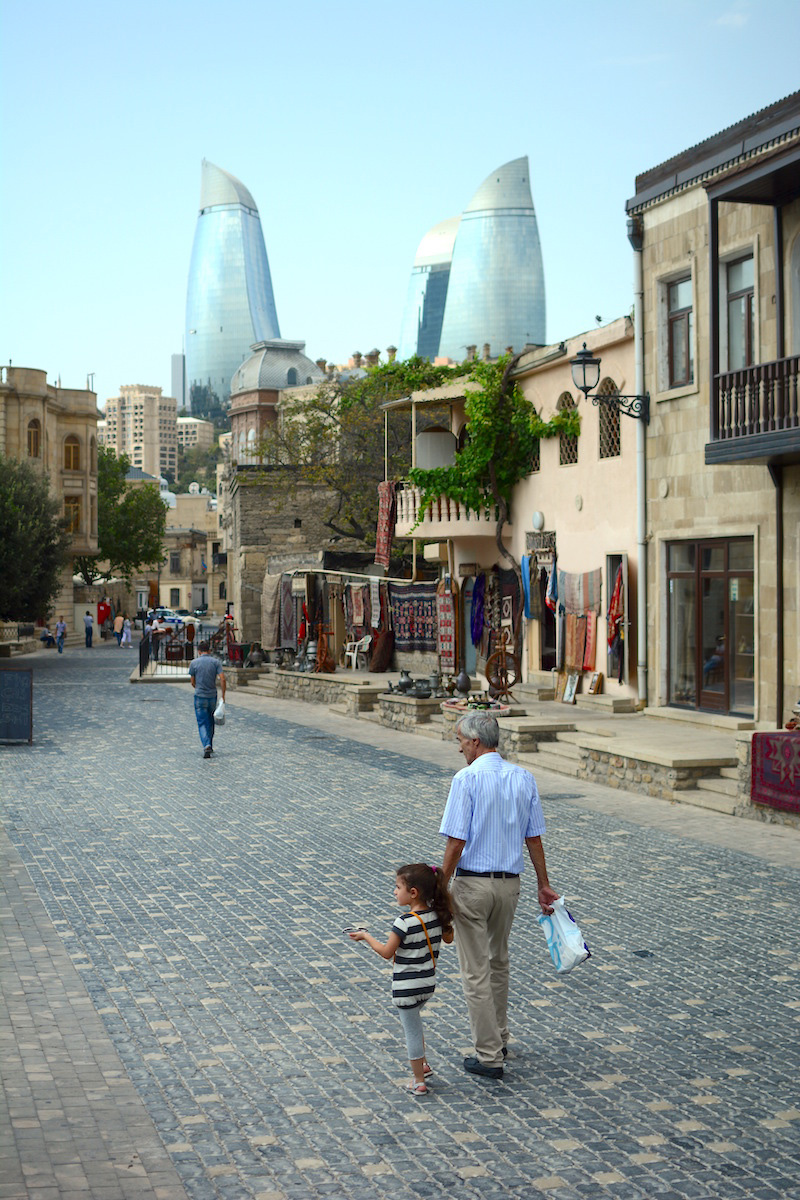 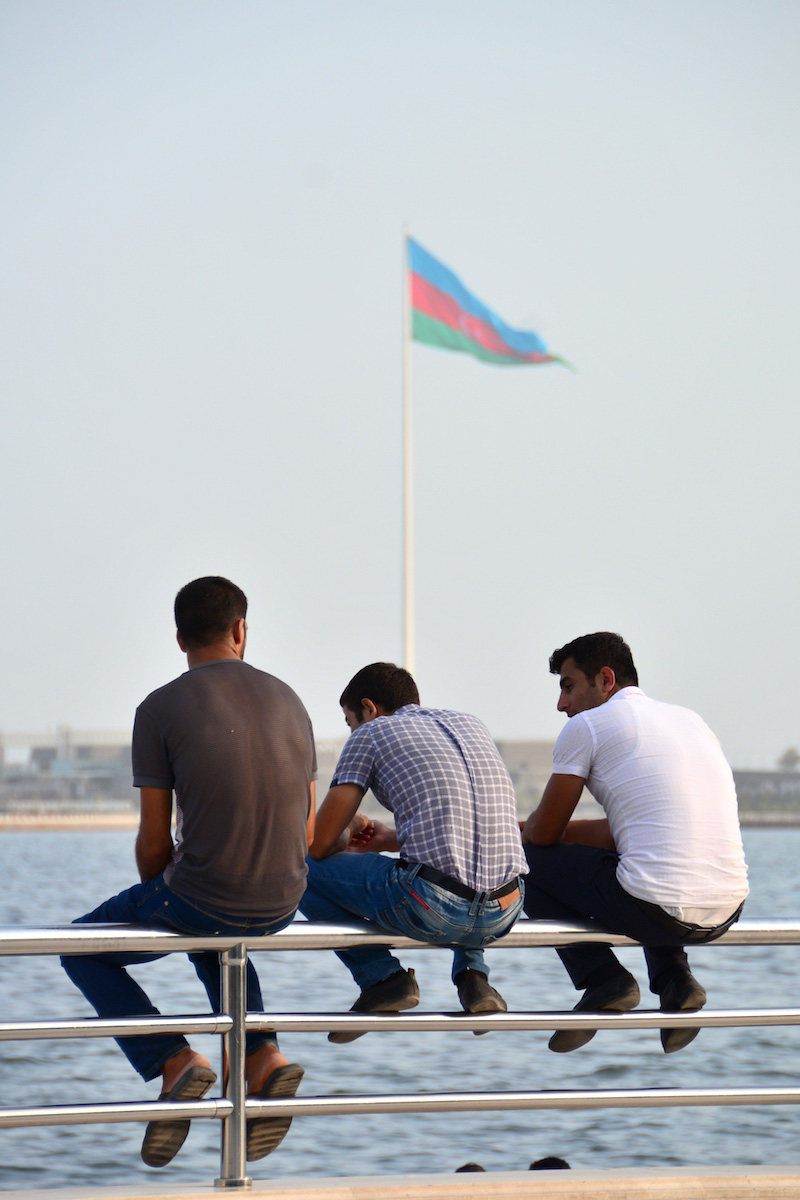 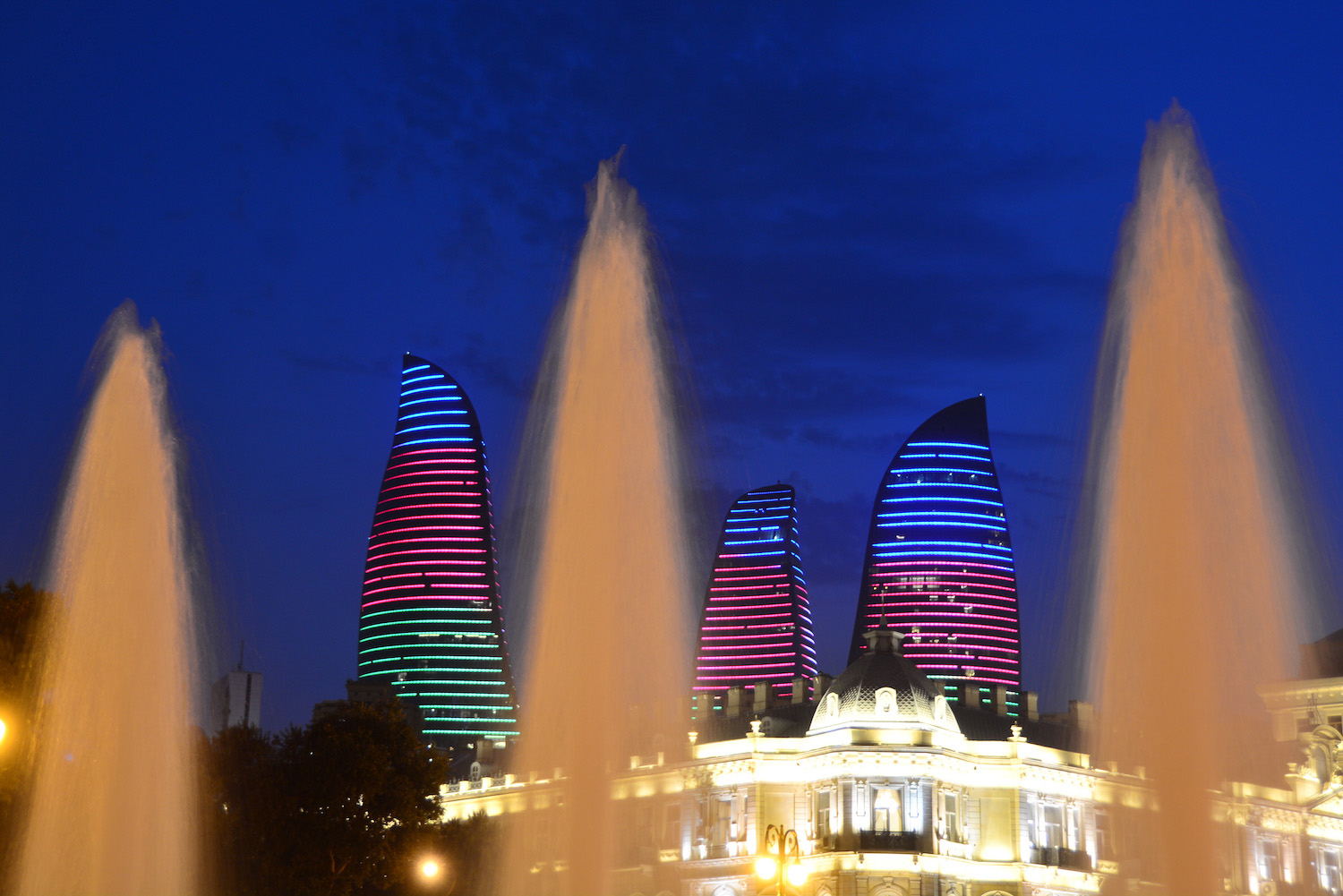 Looking for a savior

As you work through your own Baku itinerary, one thing you’re certain to hear about Azerbaijan’s capital is that much of it has been re-constructed with tourists in mind, from the Old Town I described above, to the picturesque Baku Fortress Wall, to some of the important places of worship you find inside it. With this being said, Juma Mosque is one of the best examples of Baku sightseeing.

I also recommend a visit to the Hindu/Zoroastrian Ateshgah of Baku, which is not to say Baku is only as spiritual as its holy sites—quite the opposite, in fact. One of my favorite things about Baku, and indeed one of my biggest surprises, was how much certain parts of Baku city center reminded me of Paris, a likeness that’s also rumored to have been engineered after the fact.

This article makes it pretty clear how many days in Baku I think you should spend—the answer is two—but what about the rest of Azerbaijan? Had my Caucasus trip gone as planned, I would have spent a night each in the cities of Qax and Sheki (which I mentioned in the introduction to this sample Baku itinerary) in addition to my two days in Baku itinerary.

Depending on how flexible and long your own Caucasus itinerary is, I think this is a pretty good place to start from as you plan. Speaking of Caucasus itineraries, definitely consider hiring me to plan yours if you don’t feel like leaving anything to chance!

Other FAQ About Visiting Baku

How many days do you need in Baku?

I’d recommend spending no less than two days in Baku. This will allow you to explore Baku attractions like the Flame Towers and Maiden’s Tower at a leisurely pace. Moreover, since you will likely travel to Baku by plane, you need at least two days to justify the journey.

Is Baku worth visiting?

Baku is absolutely worth visiting! An ostentatious metropolis built more or less in the middle of nowhere, Baku is a unique outpost on the Caspian Sea, which almost feels like a Turkish Dubai or Doha, to me. That’s the other thing about Baku: Azeris are ethnically Turkish, so it feels quite Turkish here.

Why is Baku famous?

Baku is famous primarily because of the glittering new architecture that’s been built in recent decades by oil money. Although not as large or well-known as Dubai or Doha, the city is nonetheless a similar sort of metropolis, and affects visitors in the same way.

I can’t really speak about Azerbaijan as a whole, but Baku is an interesting city to visit, no matter how many days in Balu you end up spending. Spend your first day exploring the area between the city’s most famous towers—Maiden and Flame—and the second of your two days in Baku dissecting the diverse spirituality that will make you want to see more of Azerbaijan. I certainly wish I’d extended my Baku itinerary instead of continuing on to Armenia, which you can read more about here.