It takes a lot to stand out amid the clamor of Jonker Walk, the main pedestrian thoroughfare of Malacca, Malaysia. But even before the busker belting Hokkien love songs sang a word I could understand, his presence in front of a forgettable Chinese shrine made me stop in my tracks.

“Happy birthday to you,” he switched languages for four words, then resumed crooning in his mother tongue.

Surely he can’t know today’s my birthday, I smiled and shook my head. Feeling found out, like when your secret crush tells you he’s known all along, I continued walking.

I recalled the pair of awkward birthday phone calls that had started my day in Kuala Lumpur. Mom had used the occasion to deny climate change, while Dad asked me to tell “the Muslims” they should study science instead of Sharia.

So this is 32? I’d wondered, the morning call to prayer sounding right as Dad hung up—he’d been late to his Saturday night mass.

Hours later and a hundred miles away, I made a sharp right, the shadow Kampung Kling Mosque cast in the one-o’clock sun the perfect place to escape from it—the UV rays and the chaos of Jonker Walk.

I just missed my flight, I said aloud, realizing as I pulled my phone out of my pocket that AirAsia 101 to Kunming, China had just taken off.

As I put it back in, I looked down at my forearm, which was as red as the lanterns hanging above. I don’t remember ever getting burnt there. Yes, this is 32. 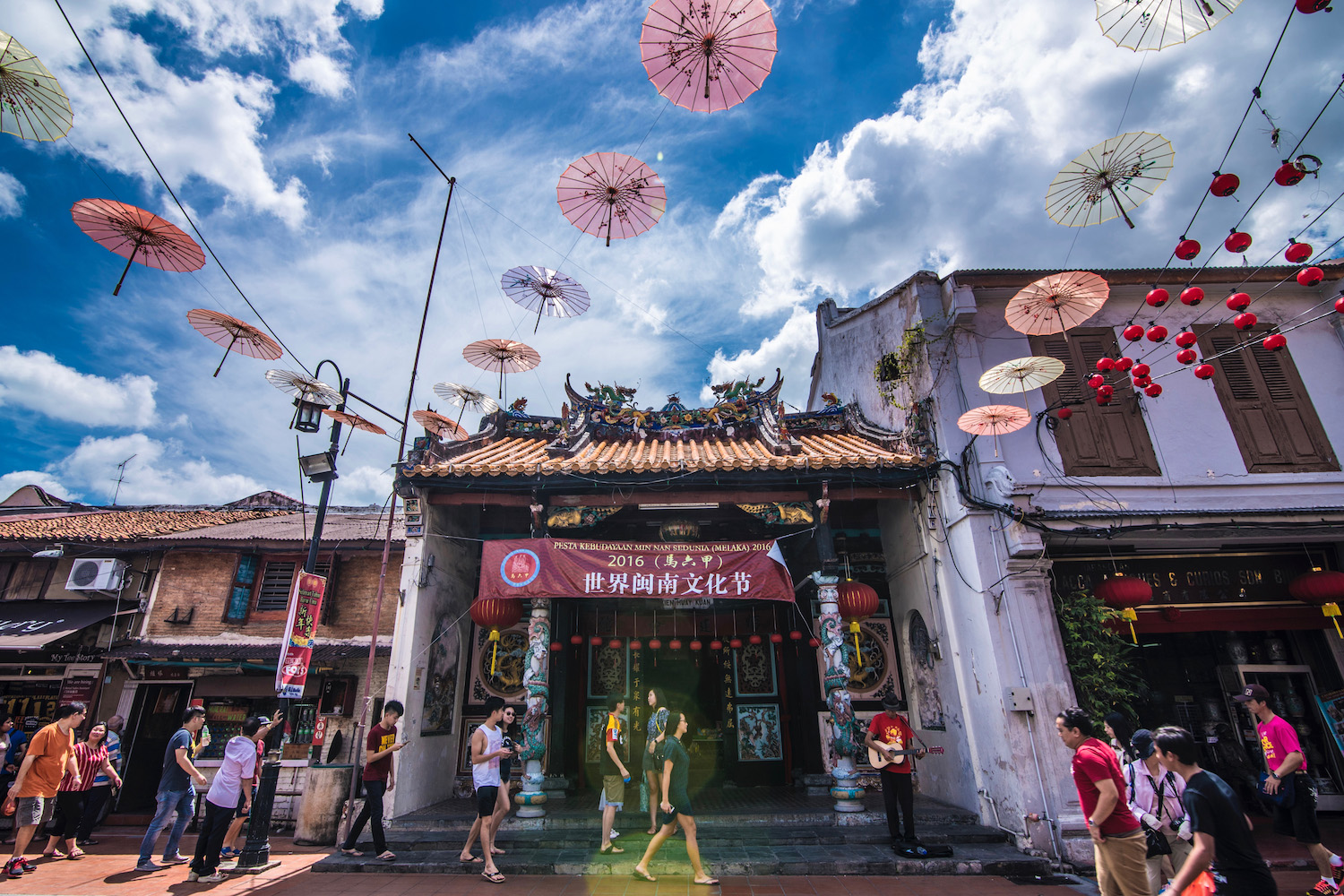 Time passes strangely in Malaysia—two weeks can be a lifetime.

At least according to Jo, a loquacious Sikh cabbie who explained, during our first few minutes together, that he’d been living in the tea-producing Cameron Highlands for three generations, that he has four children (and a grandchild) and that he detests the pro-Muslim policies of the Najib government.

“These creatures live only two weeks,” he sighed, holding a male Raja Brooke’s Birdwing at a stop along a tourist route that would’ve been dreadful and tedious without his candor. His turban was the same color as the marigolds the butterflies were feeding on. “Isn’t that sad?”

I kept my words inside my head. Two weeks can be a lifetime.

Two weeks was, incidentally, how long I would be spending in Malaysia. I’d changed my original plans—to follow up my long weekend in KL with 11 days in China’s Yunnan province—as much to avenge last year’s aborted trip as because I simply liked the way I felt and didn’t want to uproot myself.

But I didn’t bother to tell that to the handsome man sitting across the table from me at the Lord’s Cafe in Tanah Rata, where Jo had dropped me after our excursion.

A longtime Instagram follower of mine who shall go un-identified, he’d made the journey from suburban Petaling Jaya as haphazardly as I’d changed my own itinerary: He understood me, in some far reach of him.

“The tea fields are better in the morning,” he said, spreading whipped cream and jam made with famous local strawberries on his warm scone.

Catching his drift, I suggested we ride out the afternoon thunderstorms in my hotel room. As night fell, we were as unfazed by the swarms of mosquitoes descending upon our sweaty bodies as we’d been by Malaysia’s antiquated sodomy laws. 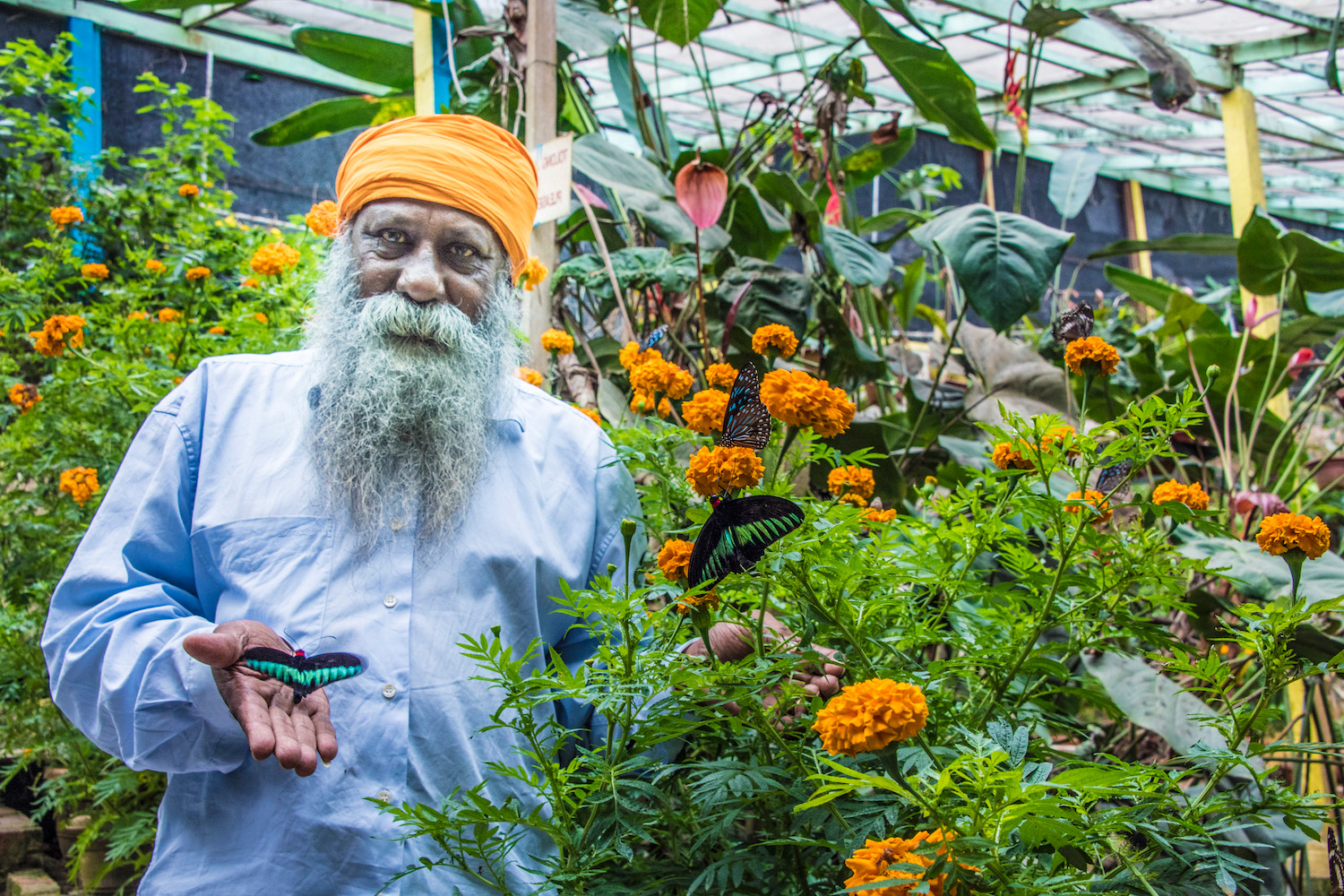 “Doesn’t it get lonely?” He asked the next morning over another scone at the Boh Planation.

I gave him my stock response, highlighting in particular how my last relationship (the one that caused the abortion of my last Malaysia trip) had inspired me to own and celebrate my love of solitude. But if I’m honest, I was kind of crushing on him.

As I watched him measure out two-and-a-half spoons full of sugar, a ubiquitous piano-and-drum line started playing over the speakers. This beautiful butterfly is going to flutter out of my life as quickly sugar dissolves in tea.

I silently belted out the song’s chorus, which seemed to match my present circumstances perfectly. But the notification that appeared on my phone blew me off the wings of love.

It was from Sarah, who’d been helping me to coordinate my planned April trip to Iran.

The Ministry of Foreign Affairs has stopped issuing authorization codes for US travelers, she wrote. We’re very sorry.

The irony of Alicia Keys’ slightly-flat declaration was as bitter as the orange pekoe I sipped. 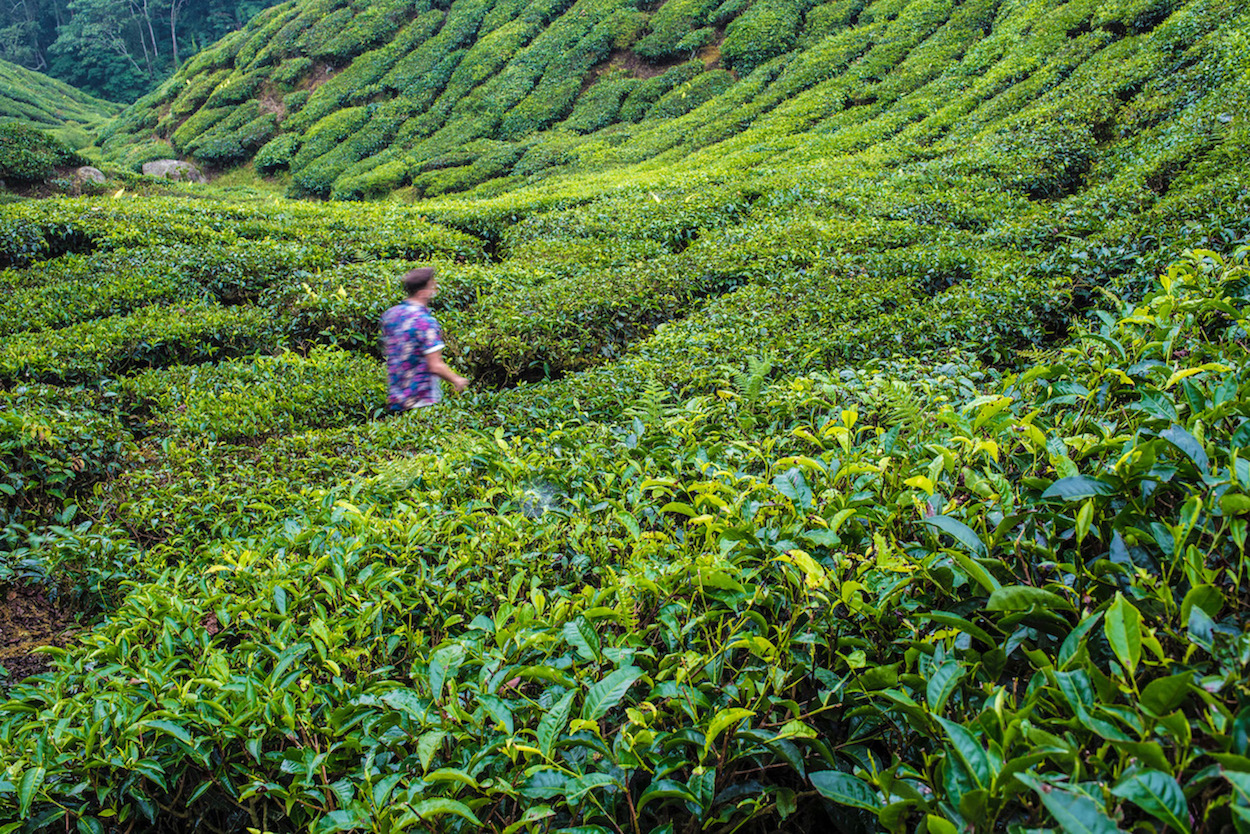 One reason I hate writing about food so much is that “authentic” food experiences pre-dispose foreigners to looking like fools. Case in point: Me at Joo Hooi, a famous hawker restaurant in George Town, on the Malaysian island of Penang.

I was too hungry to object—God knows there were plenty of people to take my place. For good measure, when the soup came, I dropped my chopsticks into it and nearly paid 50 times as much for it as I owed.

Street food is among the primary reasons tourists flock to George Town, the other being street art (which, for what it’s worth, I also find trite and tiresome).

On the bus ride in that morning, I’d met a young British woman who was definitely not making a cliché trip to Penang: Her great-grandfather had been the last white police commissioner in Penang in the 1940s, and she’d come to re-trace his steps.

Seated on a bougainvillea-shaded bench across from Cheong Fatt Tze, I smiled as I imagined the handsome young officer marveling at the so-called “Blue Mansion,” walking around the same city center I’d just traversed—minus superfluous graffiti, of course.

I’d taken a sudden liking to Penang, but my fondness just as quickly slipped away, somewhere between sea level and the top of Penang Hill.

I’ll spare you the details—it was a series of quotidian developing-world inconveniences—but it nonetheless sent the pathogenic bigotry for which I’d come to resent many of my countrymen—and my parents—coursing through my veins.

I gazed down at the illuminated Kek Lok Si temple, its statue of Kuan Yin (the Chinese Goddess of Mercy) notably dark. 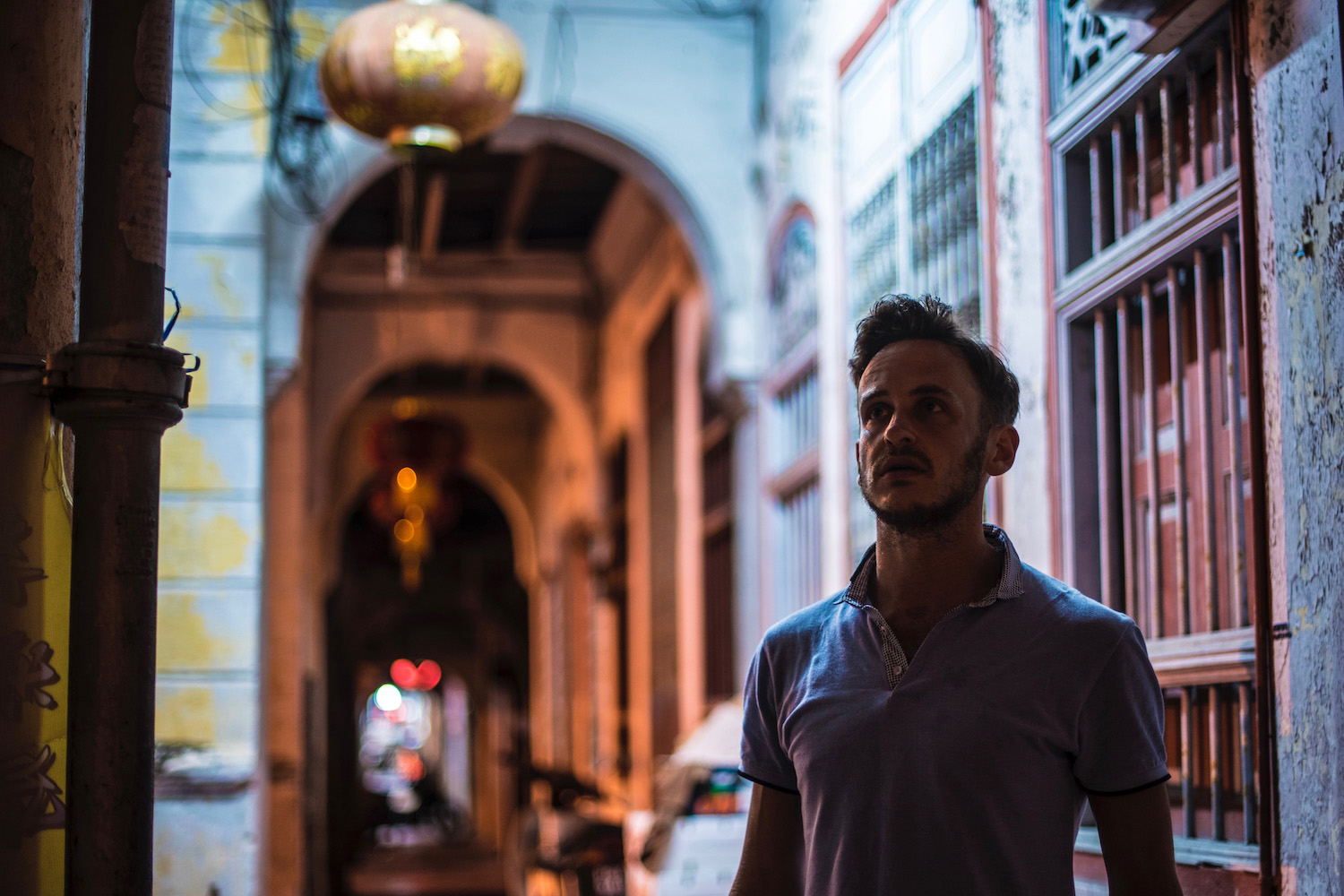 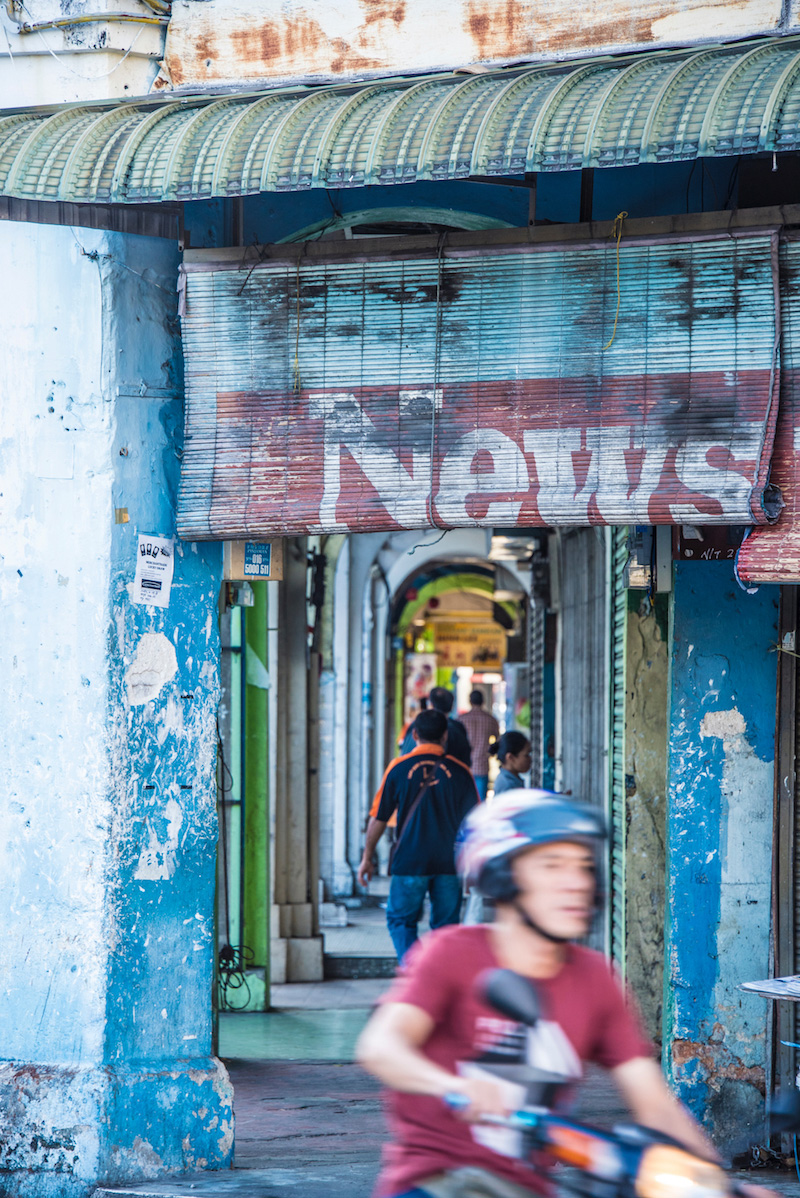 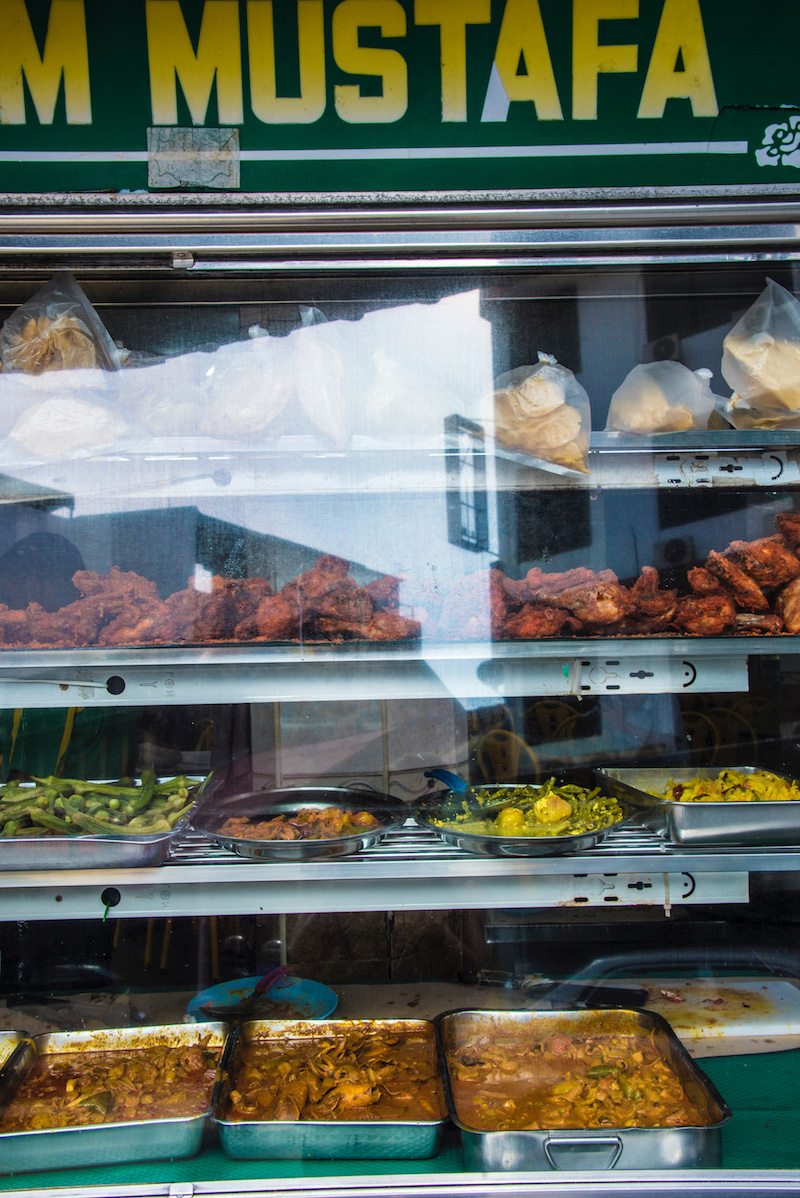 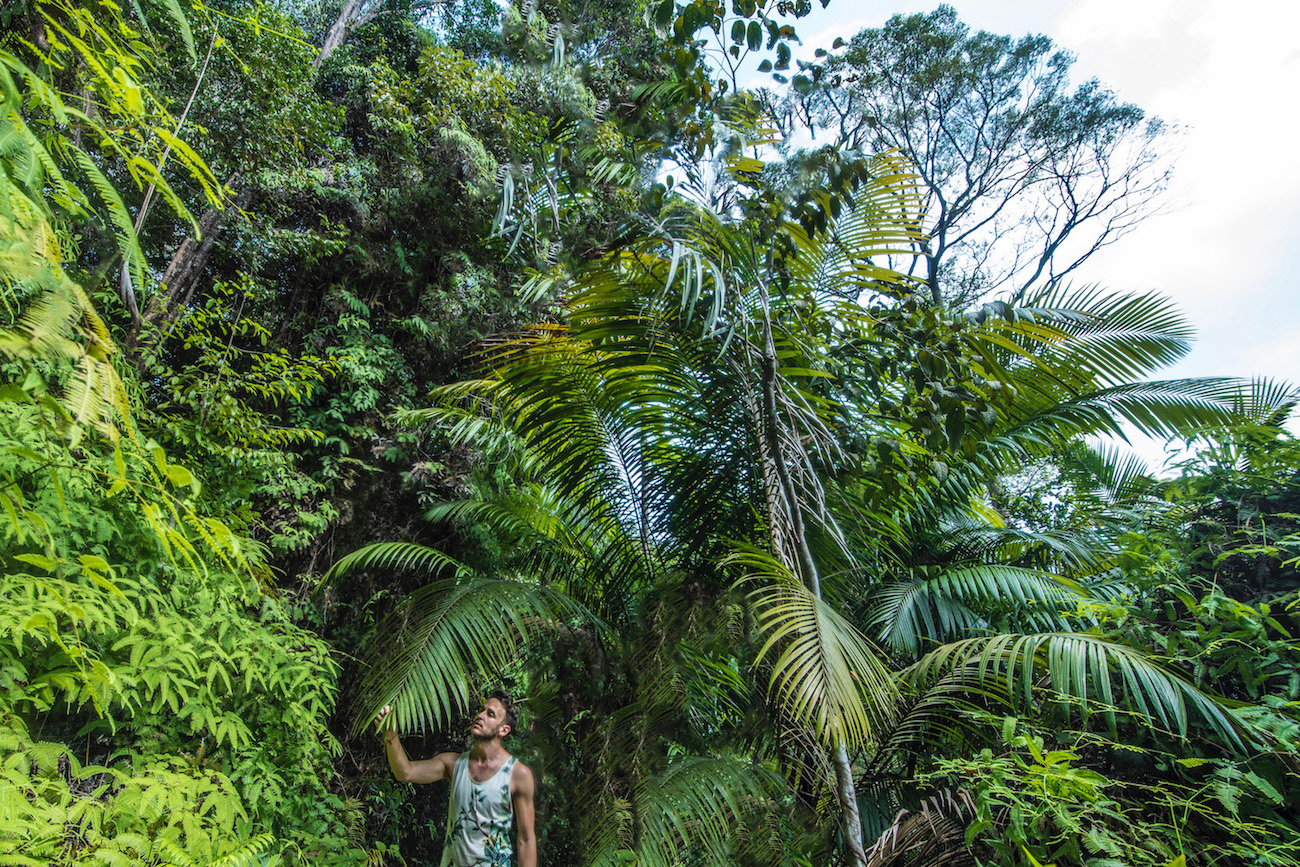 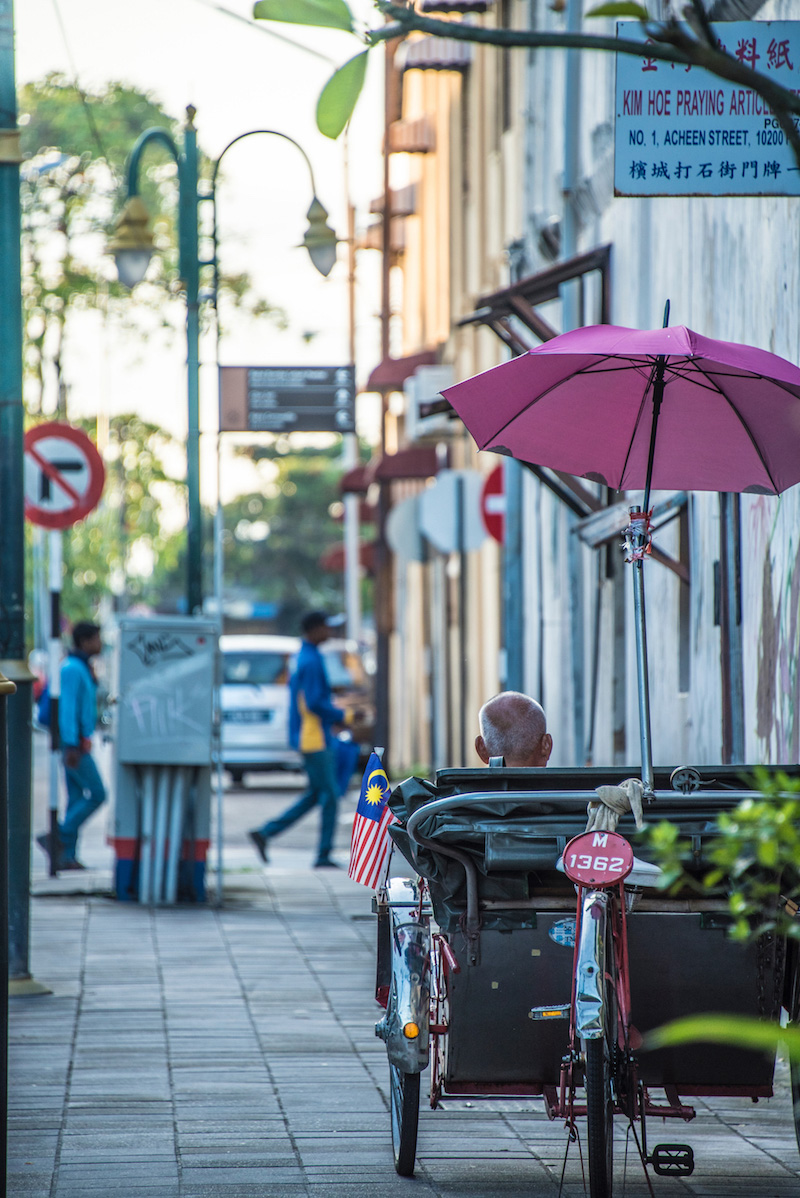 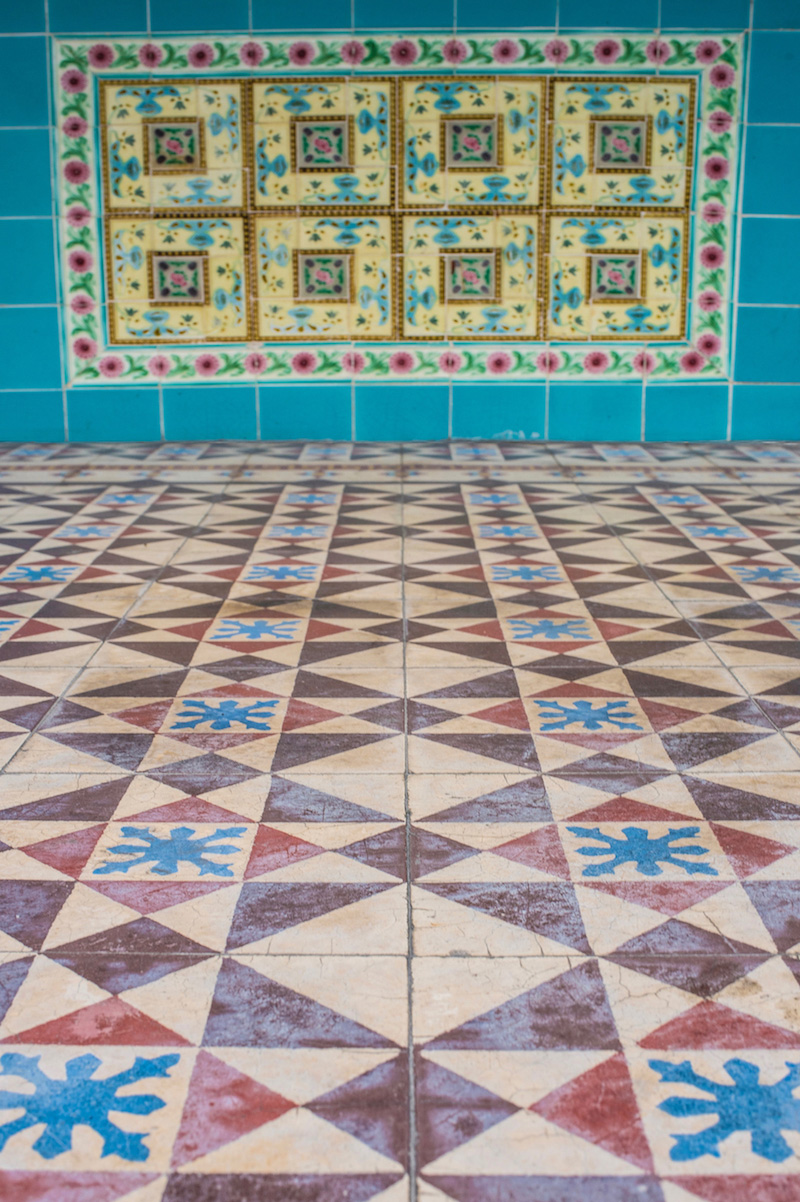 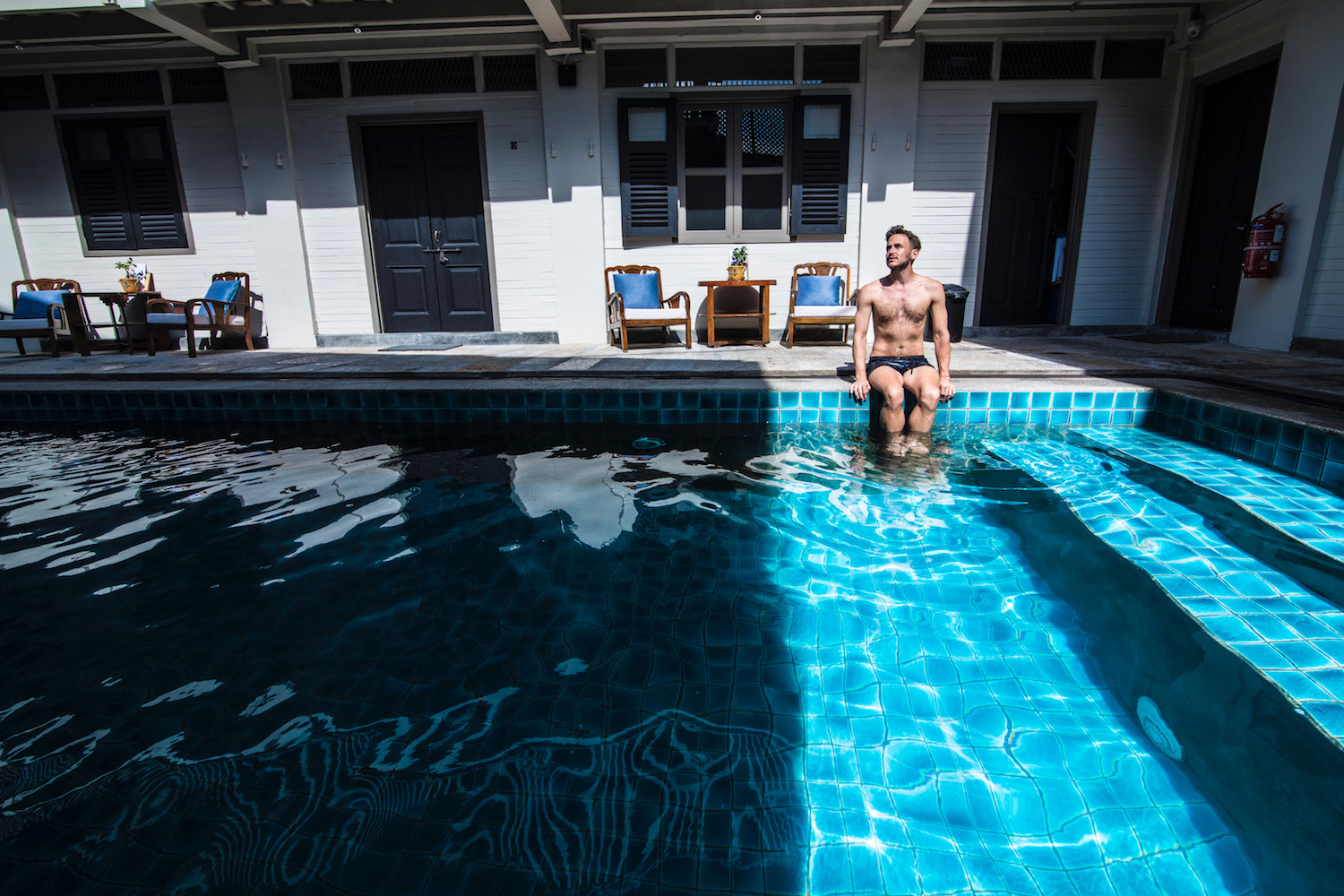 I woke up Thursday to the smell of roses. And the sound of a thunderstorm, which had dissipated by the time I approached George Town’s Chew Clan Jetty, sunrise painting the remaining clouds pink.

But the rain would not wait until some other day to come again: The horizon darkened as I sped toward the entrance to Penang National Park later that morning. “You very unlucky,” my Uber driver patronized me.

I nodded but didn’t smile, choosing instead to admire a nearby oil palm grove. Isn’t it strange how the most awful things are sometimes the most beautiful?

Although strong sunshine had briefly penetrated the jungle during my trek, a mid-day shower—and four boats overflowing with tourists—came ashore the moment I set foot onto Keracut Beach.

This is how the Nazis must’ve felt on D-Day, I rolled my eyes, and did an about-face, noticing a box jellyfish in the waters lapping my feet.

“No sea turtles,” I responded curtly to the couple I passed as I neared the exit, not wanting to stand in the downpour for long. “But plenty of venomous marine animals.”

As I emerged from the forest, soaked to the bone, the afternoon call to prayer sounded.

Later, at my hotel’s pool. there were no reptilian insurgents—just the Toni Braxton slow-jam “Another Sad Love Song,” the bubbles that fizzled up as I sank into the water, a watermelon daiquiri and a burning sun in a pellucid sky.

There was no call to prayer, either, and no floral fragrance.

And that was just as well. Back in the days when Toni was still in regular rotation, the smell of roses had always made me think of church. And going to church had always reminded me I was going to die someday, or at least made me want to kill myself. 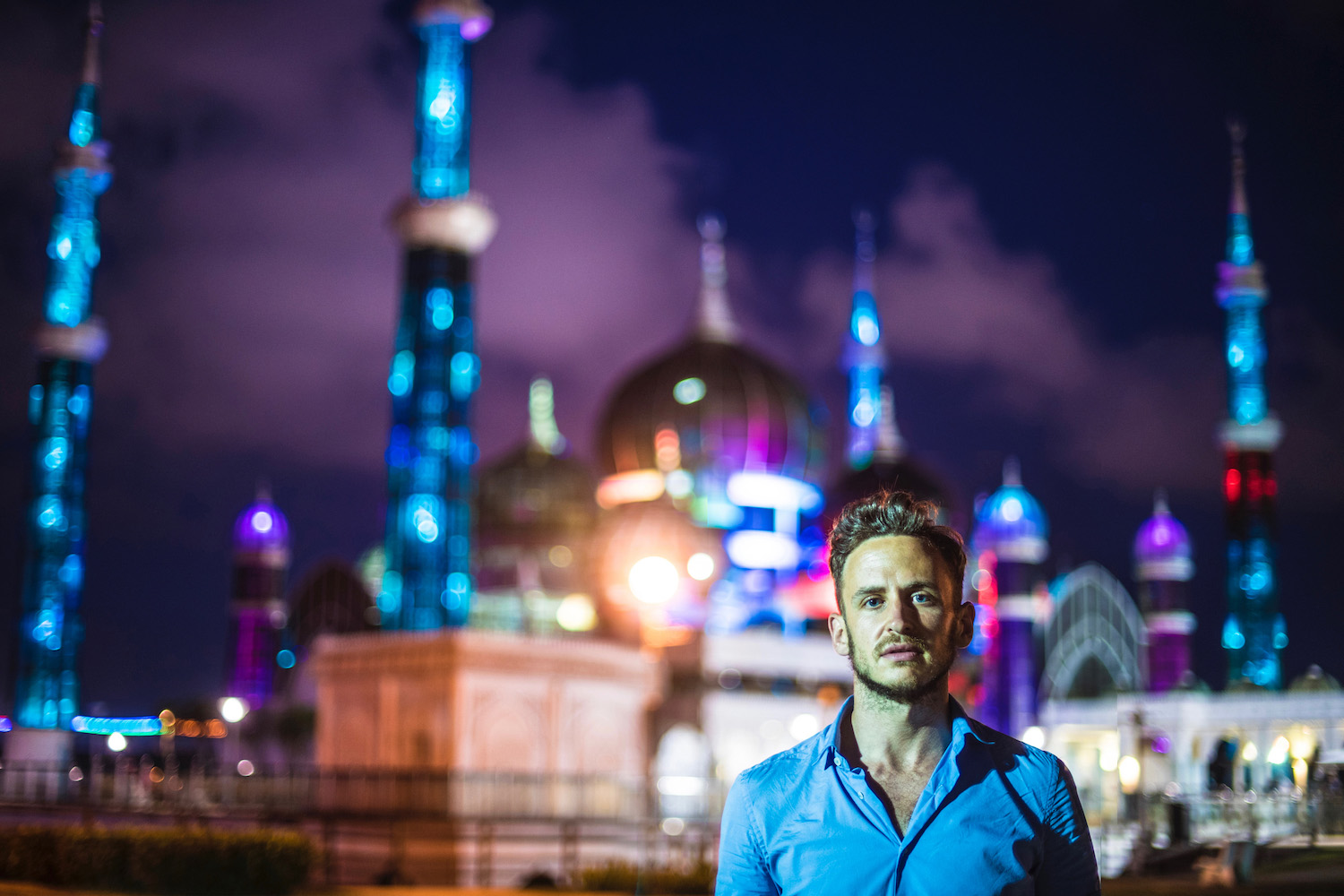 As I stood before the Crystal Mosque, a veritable rainbow strobing out of its mirrored facade in the just-fallen night, a group of teenagers were splashing around in its reflecting pool.

Initially, I saw myself in their irreverence, but quickly sobered up—I didn’t have many friends in the days when I visited religious sites at the behest of my parents.

I’d flown all the way to Terengganu, a state on the east coast of the Malay peninsula, to see a structure that represents a concept I find silly on my most diplomatic days. A modern hall of worship, gaudy even, divorced by class and caliber from the ones I’d hoped to see on my now-doomed trip to Iran.

Is there any difference between the vanity of their lives and mine? I surveyed the people on their knees around me, recalling an aphorism I’d once heard—vanity well fed is benevolent—before becoming distracted by the tourism propaganda hanging overhead.

Malaysia, Truly Asia. Does vanity get better fed than that?

Just then, a tap on the shoulder. “Of course I would’t mind taking your picture.”

There was nothing remarkable about the three veiled women, or the way I photographed them. But my heart felt open as they walked away from me.