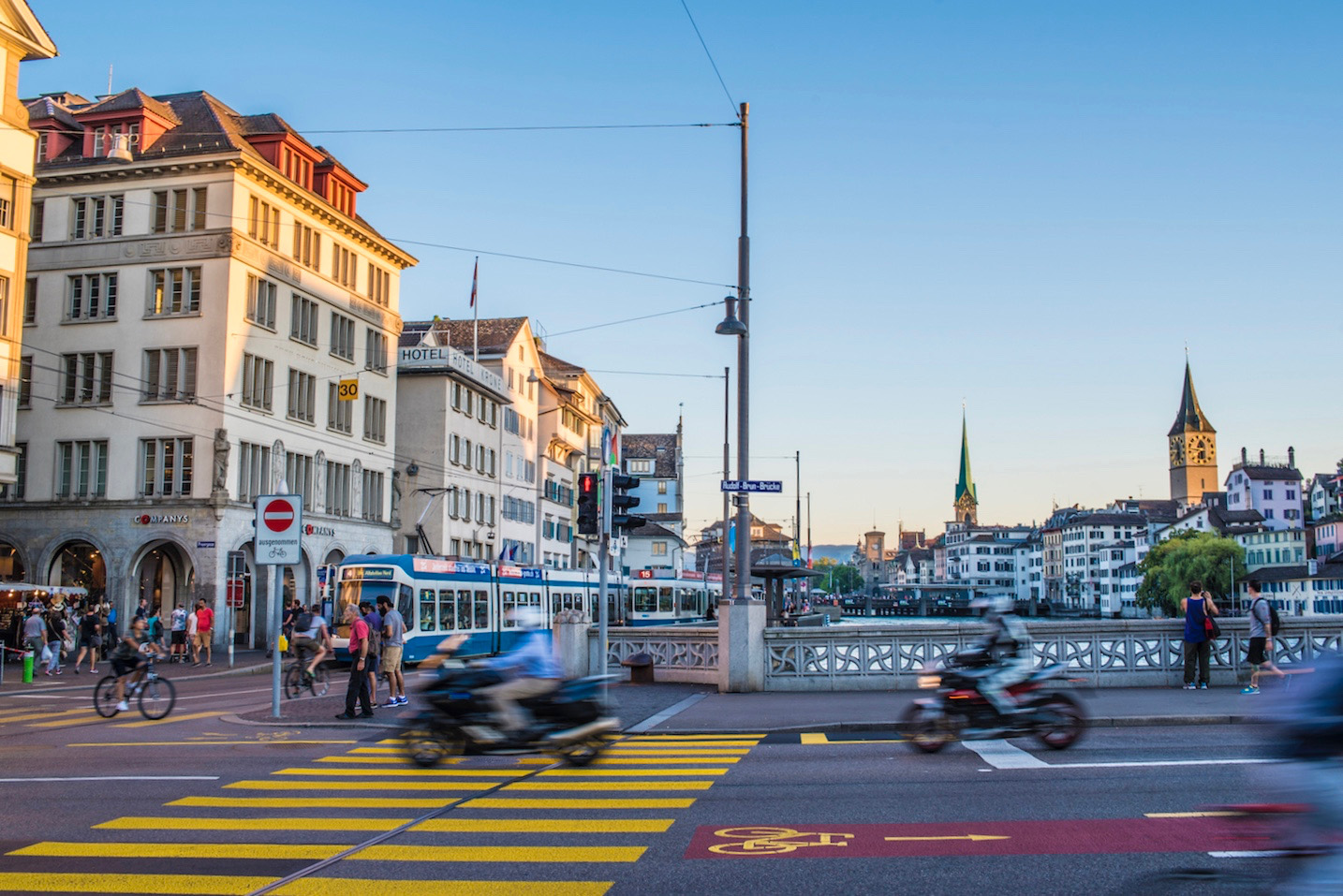 The unfortunate truth about comparing Zurich vs Geneva? Neither of these cities are top Switzerland destinations in and of themselves—most people still in either or both on their way to somewhere else.

On the other hand, there are important differences between Zurich and Geneva. Given the relative proximity of both to more exciting environs, it’s worth taking these into account, if only to choose a more enjoyable base for your broader travels throughout the country.

Regardless of where your head is at now, I imagine you’ll feel much more clarity when you finish reading this article. Switzerland, no matter where you end up seeing it from, is closed than ever.

Need help planning your trip to Switzerland? Hire me as your Travel Coach!
Contents
1  How I Came to Know Geneva and Zurich
2  Ways to Compare Geneva vs. Zurich
2.1  Things to do
2.2  Places to stay
2.3  Restaurants
2.4  Language and culture
2.5  Nearby destinations
3  What is the Prettiest City in Switzerland?
4  Other FAQ About Zurich and Geneva
4.1  What is the difference between Geneva and Zurich?
4.2  Is Geneva worth seeing?
4.3  Is Zurich more expensive than Geneva?
5  The Bottom Line

How I Came to Know Geneva and Zurich

For me, the Geneva vs Zurich debate started years before I visited the former. I remember Bianca and I were walking through Zurich Haubtbahnhof, likely stoned off our asses, when a train bound for Geneva (“Genf,” according to the German-language announcement) was just about to department. “Can you imagine if you were on that train?” She laughed. “It would be so awful.”

To be fair, since Bianca lives outside Zurich-proper, I actually hadn’t really gotten to know Zurich very well by that point; it took me until roughly 2016, which was my 9th or 10th trip to Switzerland. By contrast, I only got around to visiting Geneva in 2021 (the year I’m first writing this piece), by which point I was well-traveled enough to judge the city not only in the context of Switzerland, but indeed most of the rest of the world.

Ways to Compare Geneva vs. Zurich 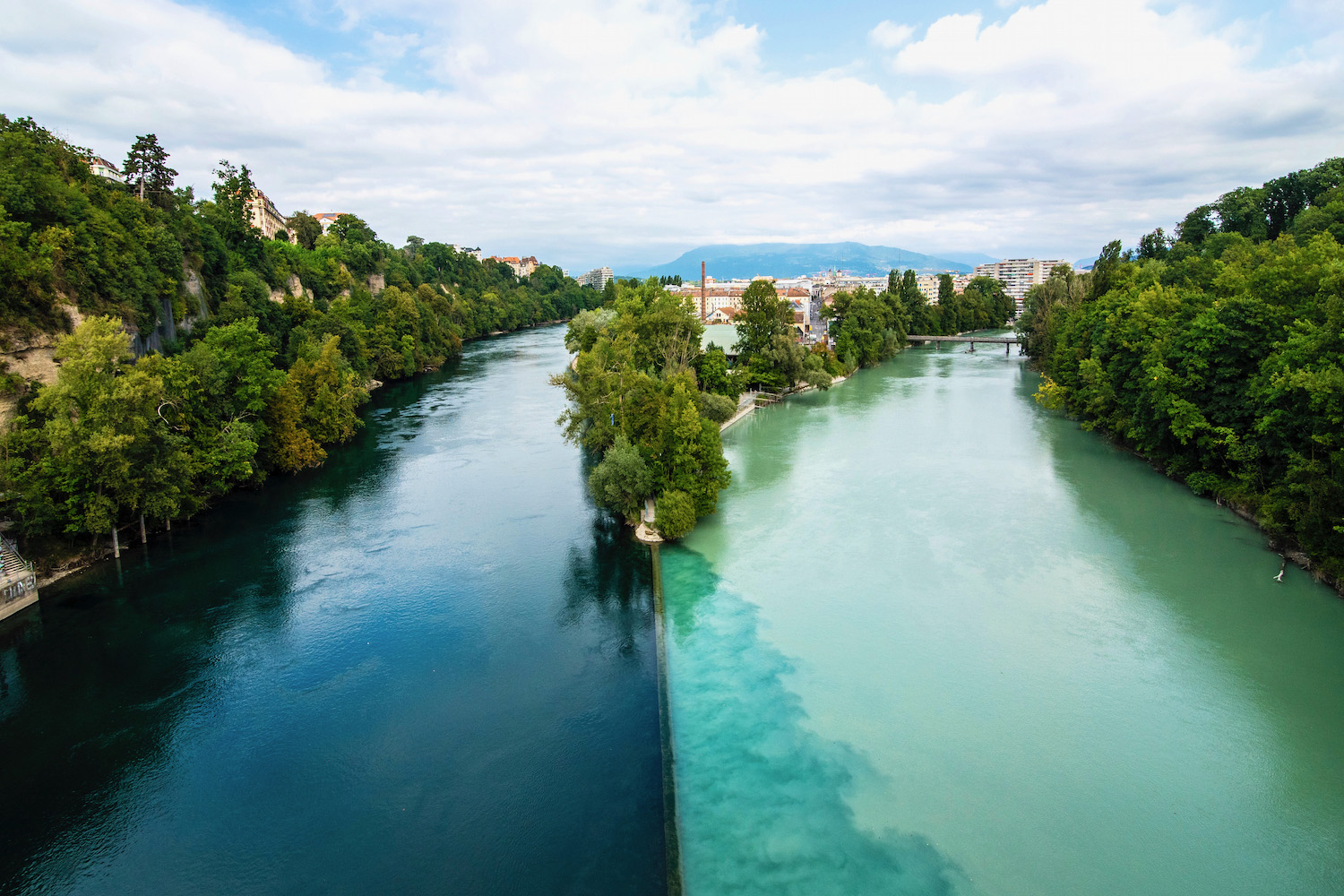 Neither Geneva nor Zurich are tourist paradises. The rivers and lakes that run through each figure heavily into their appeal. Zurich’s Grossmünster and Fraumünster churches sit on either sit of the River Limmat, which empties into Lake Zurich, a favorite place for sunbathers and pot smokers. In Geneva, meanwhile, you can marvel at La Jonction between the Rhône and Arve Rivers, or admire the Jet d’Eau from Lac Leman. 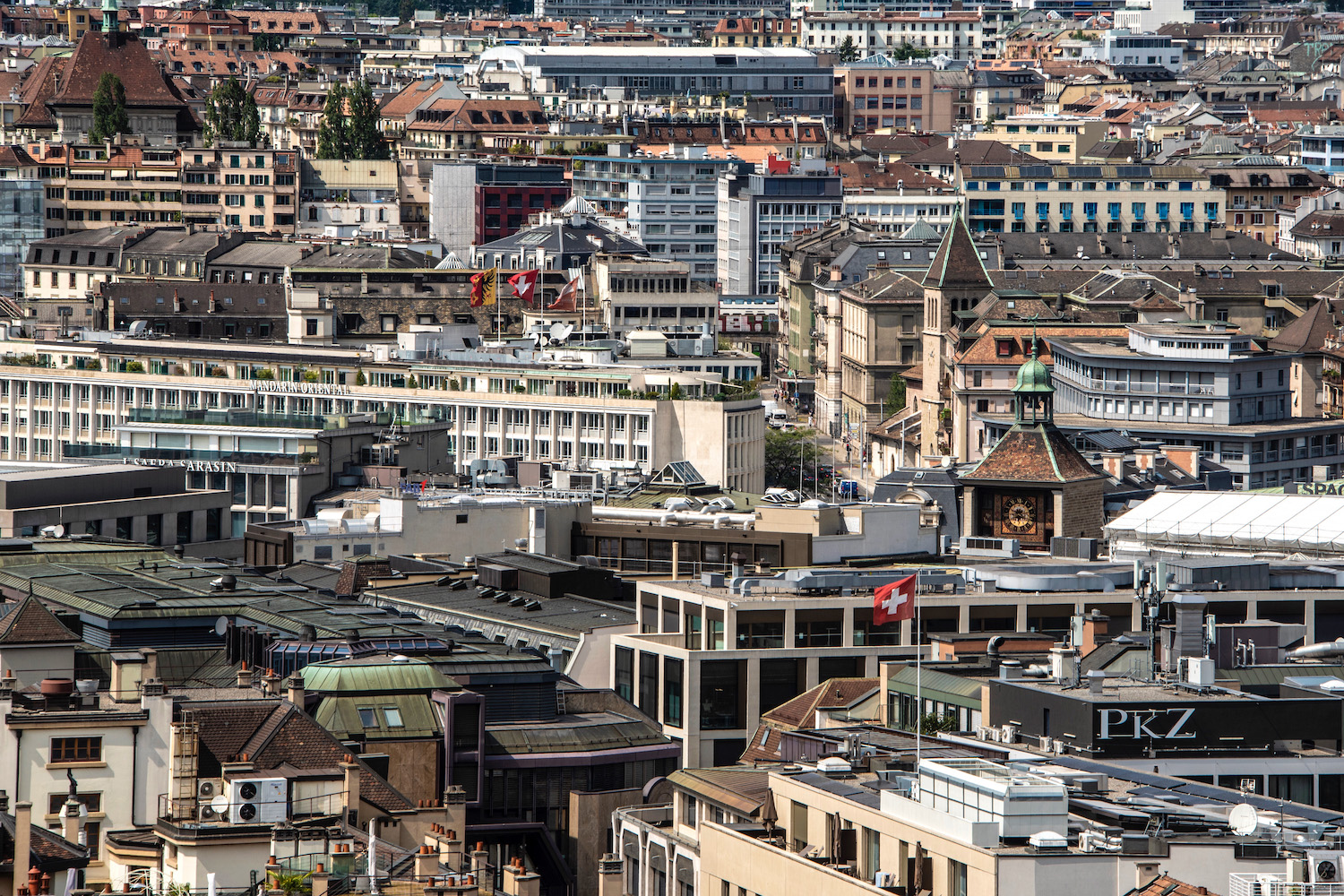 Another way to compare Zurich vs Geneva is in terms of places to stay. Both are home to their fair share of Airbnb apartments, and hotels that are high quality and centrally located, but relatively expensive. This is the case in Zurich, where Hotel Arlette Beim sits within walking distance of most central attractions, as well as Geneva’s Hotel la Cigogne, which is a stone’s throw from its own small Old Town. 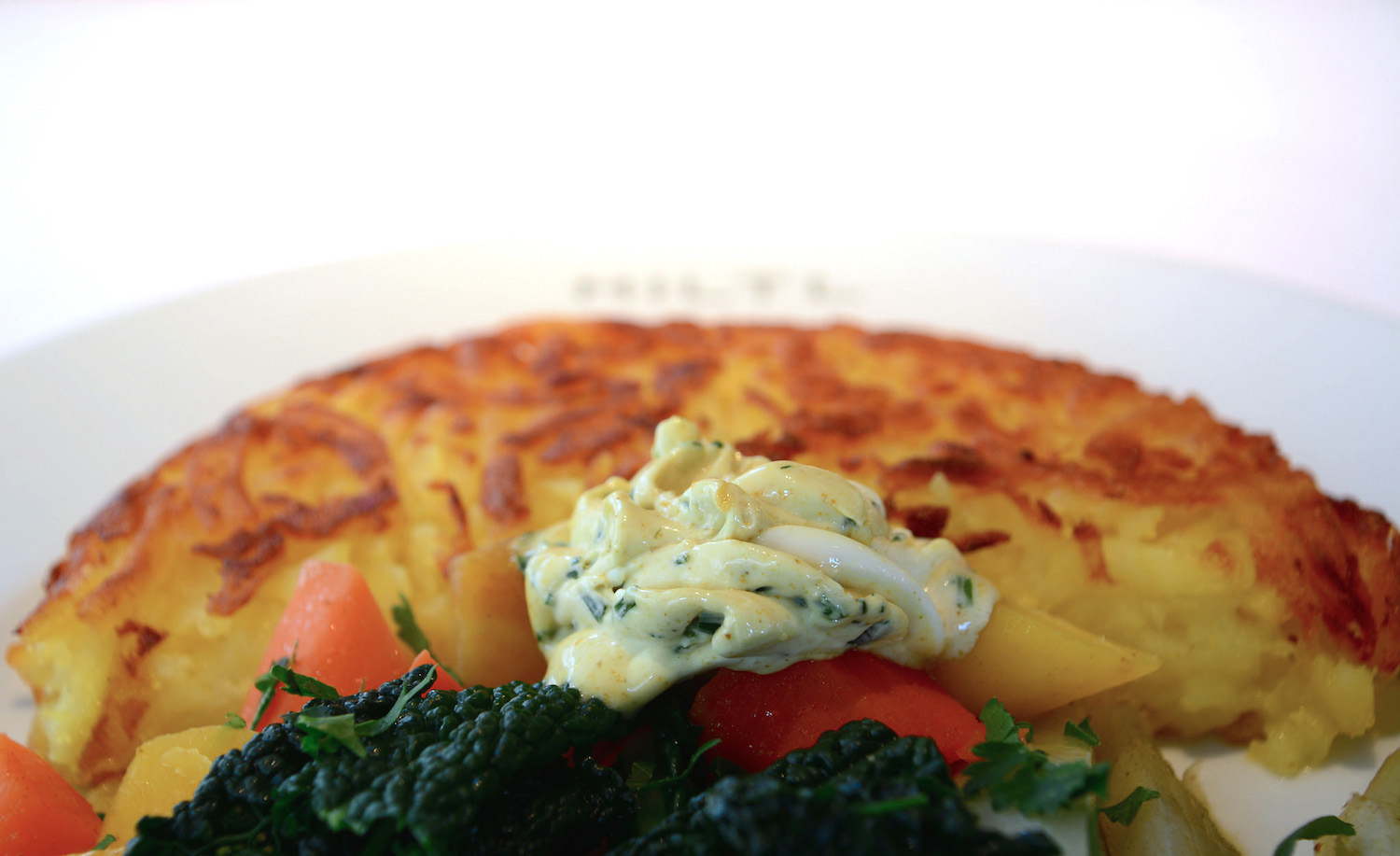 The bad news? The best Swiss food is almost always found in the mountains, whether that’s globally-known classics like raclette and fondue, or rösti, a dish most people seem to discover only after arriving in Switzerland. The good news? Both Zurich and Geneva offer a wide variety of restaurants from around the world—although, again, you’ll need to prepare to pay for your experience.

The most obvious difference between Zurich vs Geneva is that people in Zürich speak German, while those in Genève speak French. Of course, these linguistic differences manifest themselves in the broader culture as well. On the other hand, both cities have distinctly Swiss architecture which, when combined with the distinctly Swiss landscapes that rise above both, makes them seem far more similar than different in this regard. 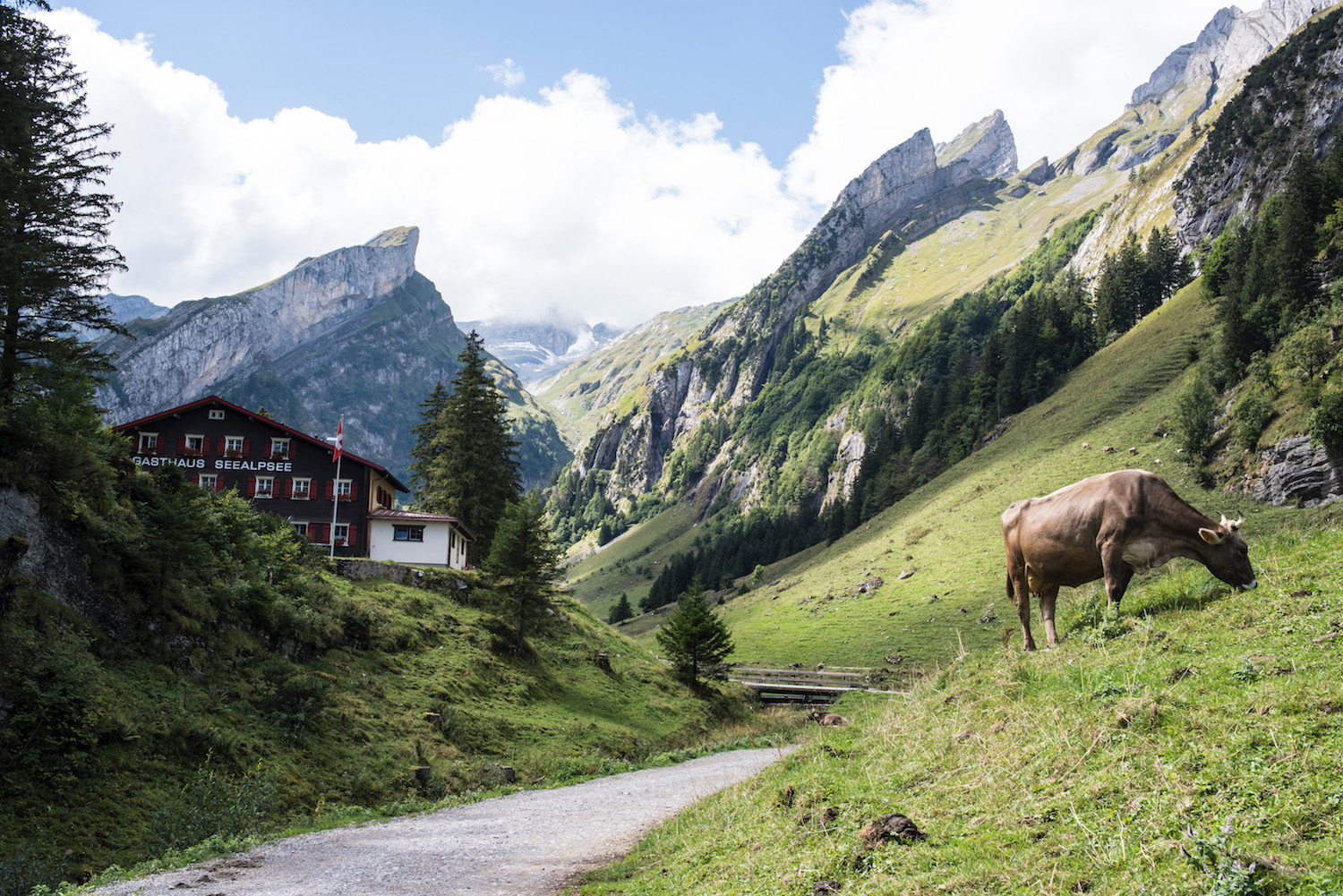 Both of Switzerland’s largest cities are better jumping-off points than they are tried-and-true destinations. From Zurich, the most obvious onward stops at Rheinfall waterfall north of the city, the castle town of Baden to the northwest and Luzern or Interlaken to the south. In Geneva, meanwhile, you can easily take day trips to cities like Lausanne and Montreux on the eastern shores of Lac Leman, or to Annecy, France on its western flank.

What is the Prettiest City in Switzerland?

It’s neither Geneva nor Zurich. I mean look, both of these cities are beautiful in their own rights. They’re bisected by crystalline, clean rivers, which flow into massive, glacial lakes with horizons that jut up against mountains. Small enough to explore on foot but strung together with safe and easy-to-use tram lines, they’ve more than earned their high rankings on “Quality of Life” lists, even if the cost therein is steep.

Indeed, we have to move away from the Geneva vs Zurich debate if we truly want to identify Switzerland’s most beautiful city. In terms of actual large-ish cities, I’d probably say that Montreux, Luzern or Interlaken easily take the title of “most beautiful” from Geneva or Zurich. When we expand this to small towns in Switzerland? Well, that is a rabbit hole I just don’t have time for at the moment.

Other FAQ About Zurich and Geneva

What is the difference between Geneva and Zurich?

The primary difference between Geneva and Zurich is that people in the former speak French, while those in the latter speak German. Both cities are very international thanks to the rise of teaching English abroad, although Zurich is more of a banking center, while diplomacy is the primary industry and currency of Geneva.

Is Geneva worth seeing?

Geneva is worth seeing, but only if you do so with appropriate expectations. Rather than a standalone European city à la Paris or Venice, which acts as a self-contained destination, Geneva is more a jumping off point before exploring more exciting parts of Switzerland.

Is Zurich more expensive than Geneva?

Zurich and Geneva are approximately as expensive as one another, at least as far as travelers are concerned. You can expect to spend no less than 200 CHF per person, per day for your accommodation, meals and local transport (not including internationals flights/trains to and from Switzerland), whether you visit Geneva or Zurich.

I hope I’ve helped, at least partially, to settle the Zurich vs Geneva debate for you. The good news, no matter which of these cities you choose, is that both are basically bases for seeing more exciting destinations in Switzerland, namely the Swiss Alps. The better news? Since few people’s first trips to Switzerland end up being their last, you can always stay in Zurich next time if you choose Geneva this time, or vice-versa. No matter how many times you’ve been to Switzerland or are yet to go, consider hiring me as your Travel Coach. When you let me sweat the details, you have more time and energy to enjoy your trip!