After seven days and nearly 1,000 kilometers on the highways of Alberta, anywhere in Calgary would’ve felt like home. Thankfully, Travel Alberta was kind enough to arrange for Stephanie and I to stay at Hotel Arts, a boutique property in the heart of downtown, whose avant-garde interior stylings—one of the lamps at Yellow Door Bistro, the on-site restaurant, boasts a life-size plastic horse as its base—more than live up to its name.

“It was actually a Holiday Inn before,” laughs Katie, the hotel’s marketing manager, over breakfast the next morning. “But it’s difficult to tell, at least from the inside.”

I tried to remember what the outside of the tower looked like as I took a bite of my chicken tostada, a Tex-Mex dish (a breakfast one no less, with perfectly-poached eggs) executed so well it survived the scrutiny a Texan in Canada. “I guess this place does kind of look like a Holiday Inn from the outside.”

“I didn’t really pay much attention to it,” Stephanie, who was eating some hash browns and bacon, commented. “The view from up there was so spectacular. I was more focused on the mountains and the skyscrapers and the taxis zooming beneath my feet.”

Need help planning your trip to Alberta? Hire me as your Travel Coach!
Contents
1  Is Calgary Worth Visiting?
2  How to Divide Up Your Calgary Trip
2.1  Cowtown 101
2.2  Exploring Calgary’s neighborhoods
2.3  Where the buffalo roam
3  Where to Go After Calgary
4  FAQ About Visiting Calgary
4.1  How long should you spend in Calgary?
4.2  How many days do you need in Calgary and Banff?
4.3  Is it worth staying in Calgary?
5  The Bottom Line

Is Calgary Worth Visiting?

Now, before we get too deep into the topic of how many days in Calgary you should spend, let’s ask a more fundamental question: Is Calgary even worth visiting? It’s a necessary stop for sure, being where Alberta’s largest international airport is located. But the city pales in comparison to Banff and other natural destinations in Alberta; many people only sleep a night there because they feel like they don’t have a choice.

I won’t claim that Calgary is as stunning as Banff, or even as interesting as cities in Canada’s east, particularly not Montreal. But if you set the intention of seeing Calgary for what it is, and give yourself at least 2-3 days to discover the city’s charms, I have no doubt you’ll find it…well, charming, which is not a bad thing for any place in the world to be known as (trust me: I’ve visited some that are utterly irredeemable!).

How to Divide Up Your Calgary Trip

When she said “up there,” my sister was of course referring to the Calgary Tower, which is without a doubt the most memorable building on Calgary’s ever-expanding skyline, even if it was long ago eclipsed as the tallest. Indeed, as Stephanie alluded to, the view is absolutely unforgettable—start your first day in Cowtown (as some locals still refer to the city) with a trip up to the top of the tower.

Upon descending, hang a right and then cross to the north side of the street at your first opportunity. Here you’ll find the Glenbow Museum which, in spite of its understated exterior, boasts several floors of art and paraphernalia that spans not only the history of Calgary and Canada, but the entire world. When Stephanie and I visited, exhibits on tribal culture in West Africa and buddhism in East Asia supplemented surveys of Romantic colonial-era paintings, gemstones and kitschy “Canadiana.” 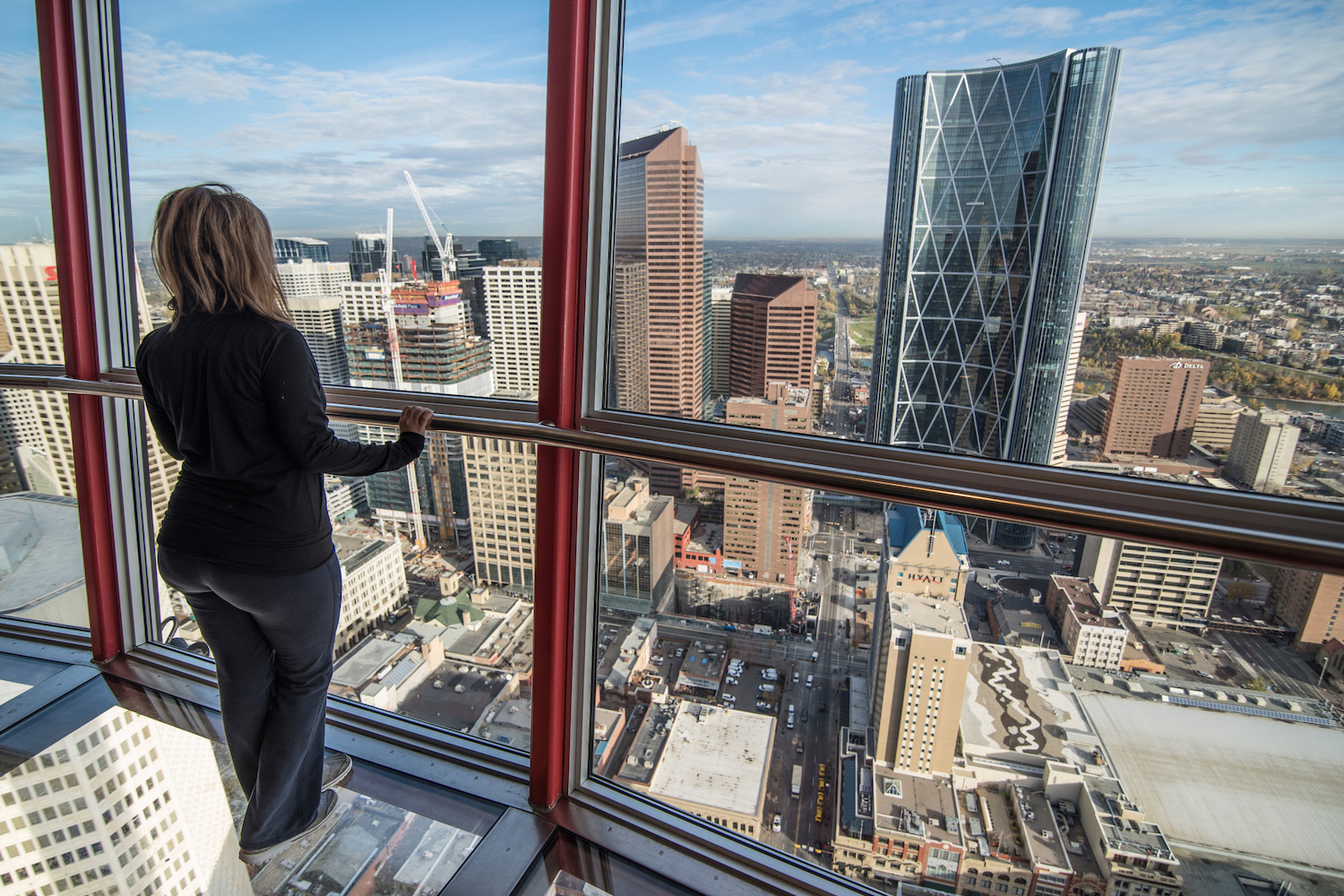 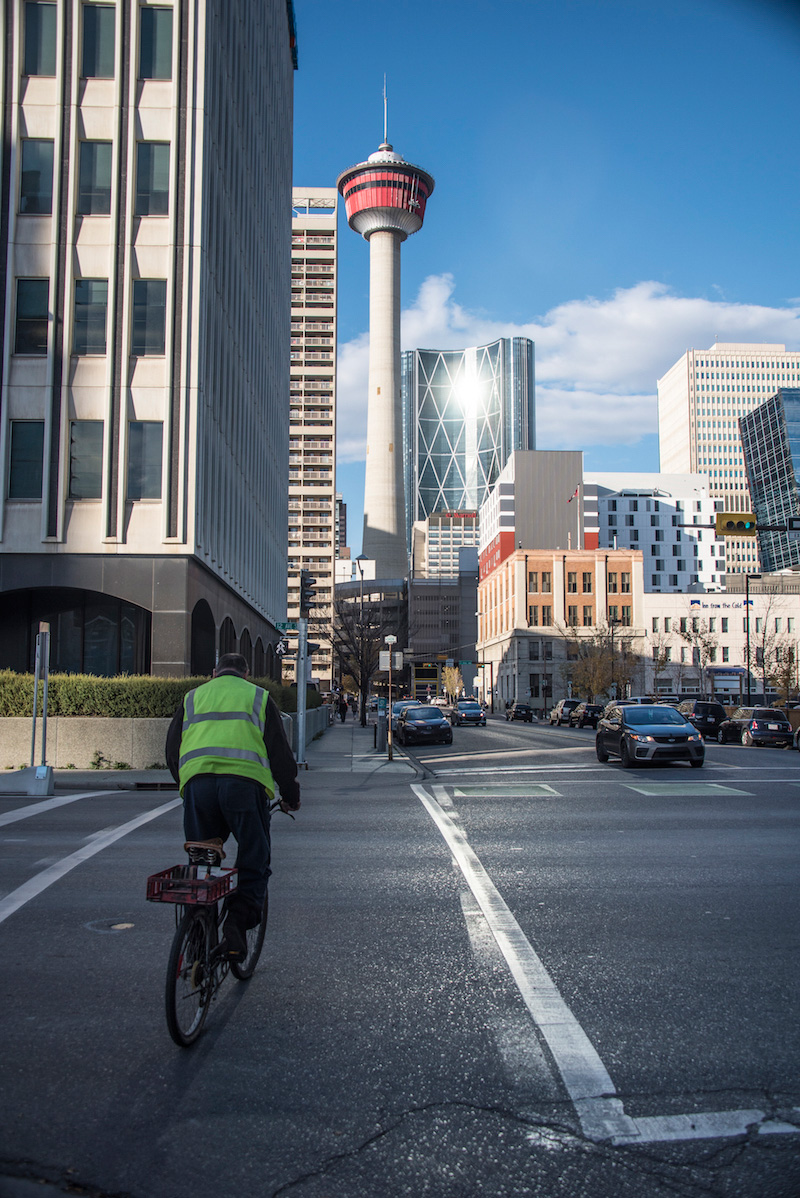 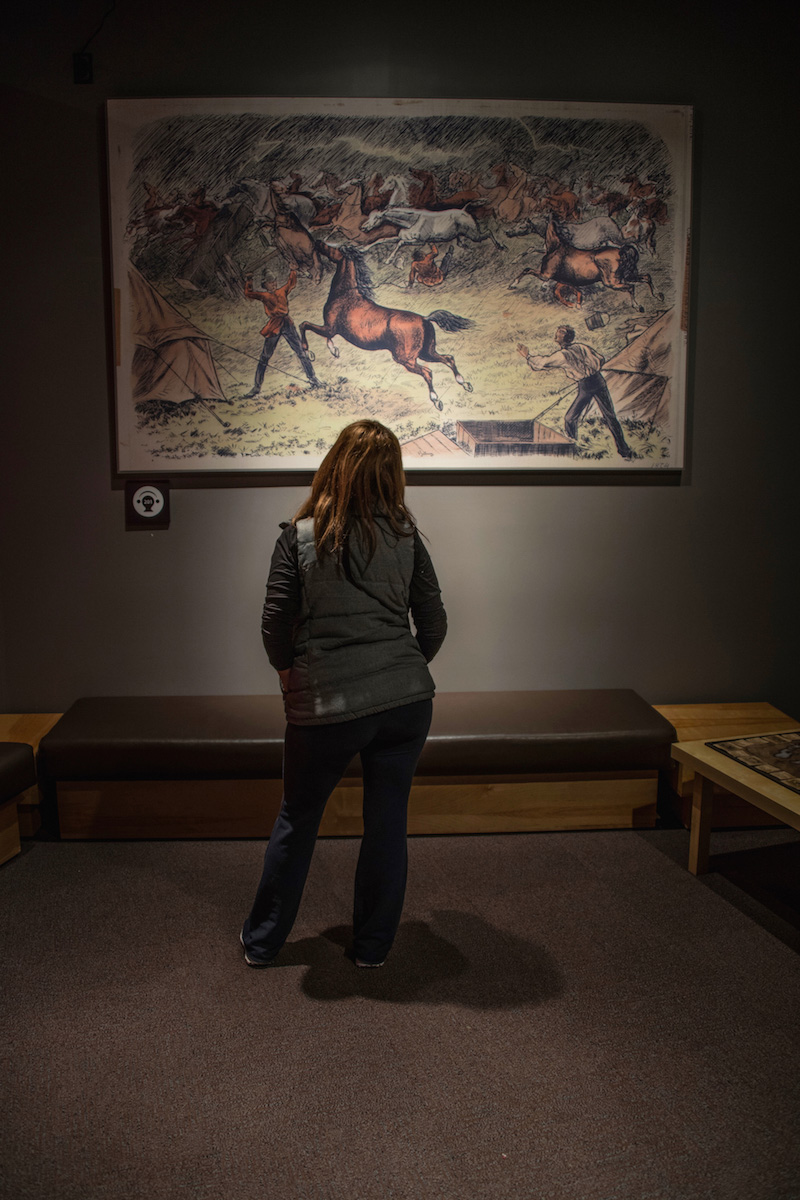 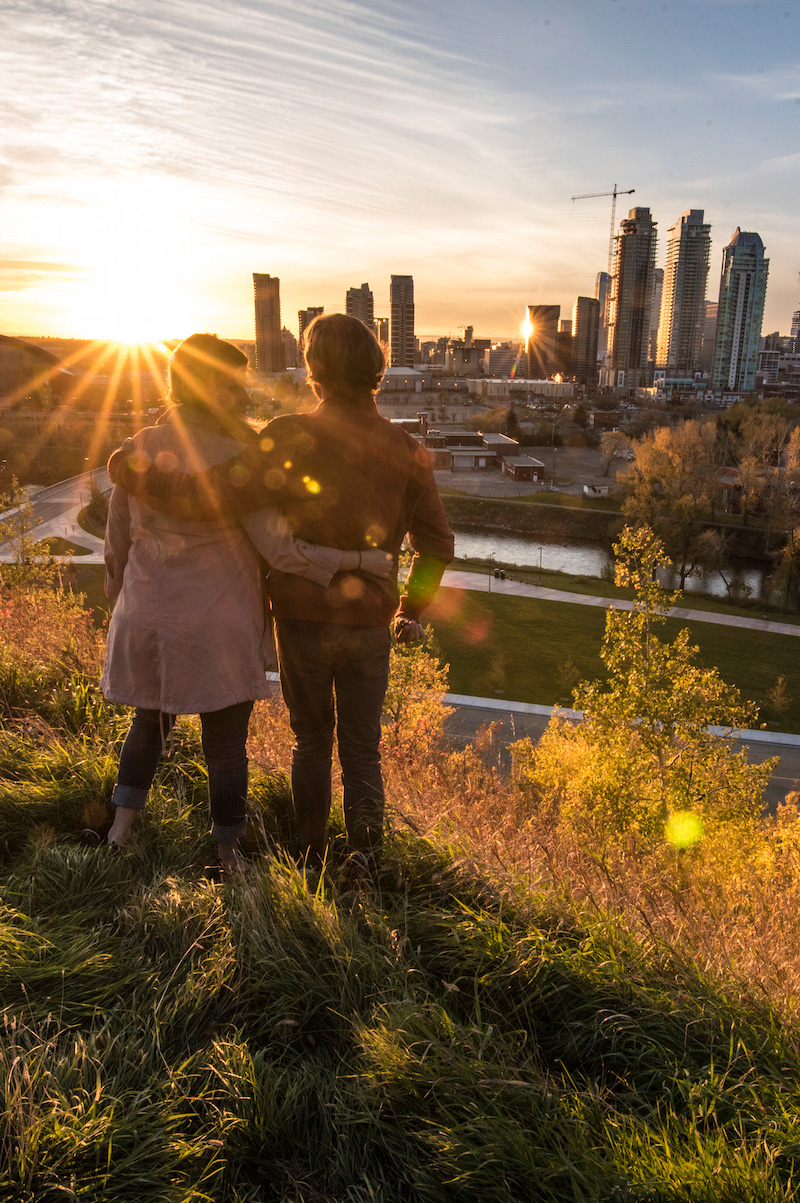 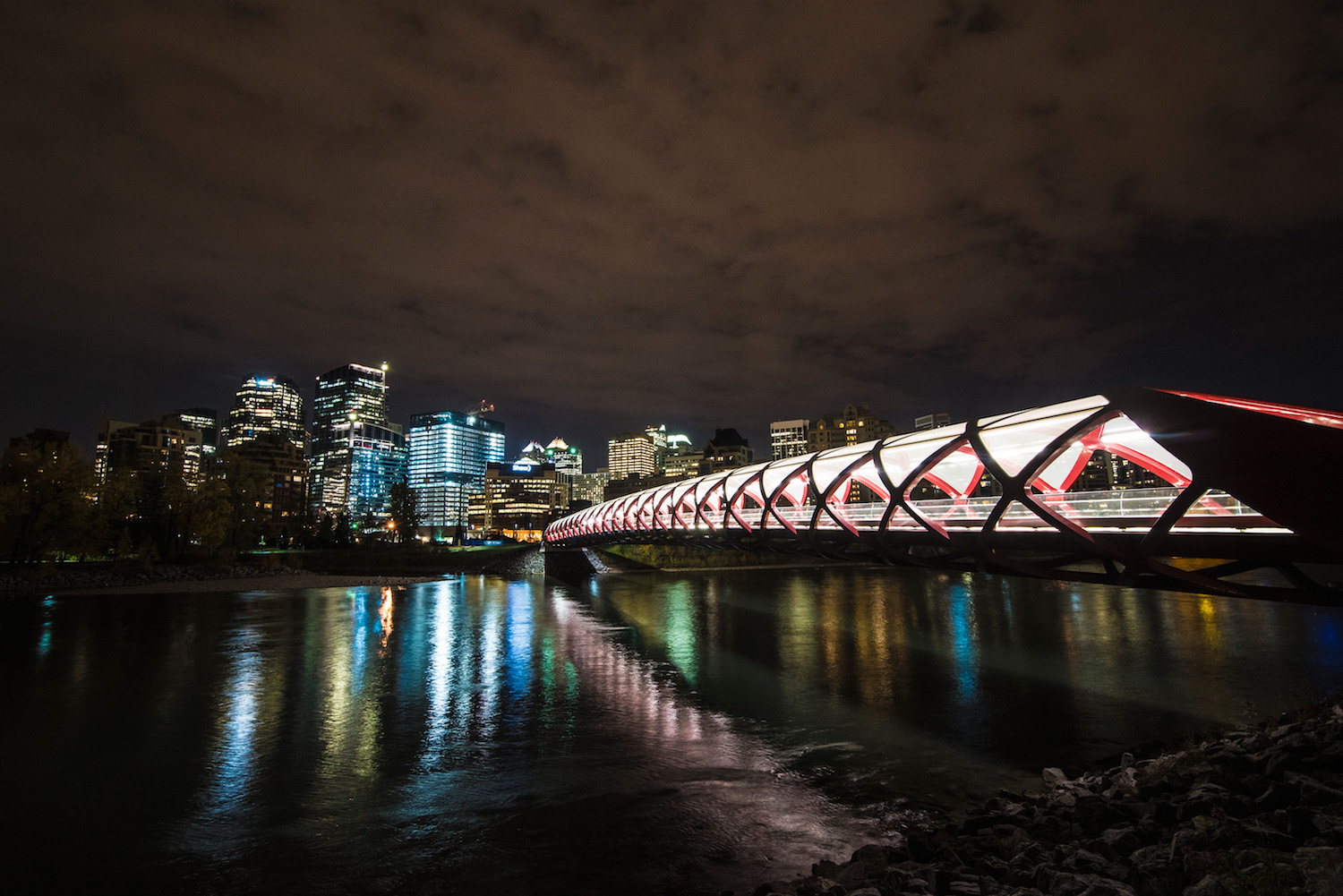 Melodrama notwithstanding, a very practical benefit of your trip to the top of the Calgary Tower (I know you’re still thinking about it) is that it gives you an overview of the city’s layout. Namely, that it is mostly grid-patterned, at least inside the bounds of its two defining geographical features: The Bow River and its tributary, sweetly named the Elbow River.

Weather permitting, rent bikes (this requires a mere trip to the front desk of Hotel Arts) and cycle along these rivers, whose clean (but cold and shallow—don’t even think about jumping in!) flows a translucent blue-green color that pairs particularly well with the bright red Peace Bridge just north of downtown. Then again, I prefer the way the bridge glows at night, particularly after a few cocktails at The National on 8th, home to Calgary’s largest rooftop bar, or taking in a sunset panorama at Scotsman’s Hill.

“Are you sure you want to do that?” I asked the man, half-joking, when he passed the extremely sharp, extremely expensive knife to my sister.

If you’d told me I would find myself in a shop full of Japanese knives while in Calgary, I would’ve laughed at you. As it turns it, Knifewear is in good company in the cosmopolitan neighborhood of Inglewood, just northeast of downtown. Think chocolate handmade from fresh, South American cacao. Middle-Eastern spices. World-class Vietnamese cuisine.

(And, incidentally, a live-plant shop Stephanie’s been following on Instagram for years.)

Inglewood is special in and of itself, but it is not unique in Calgary, which is as much a city as it is a confederation of neighborhoods. 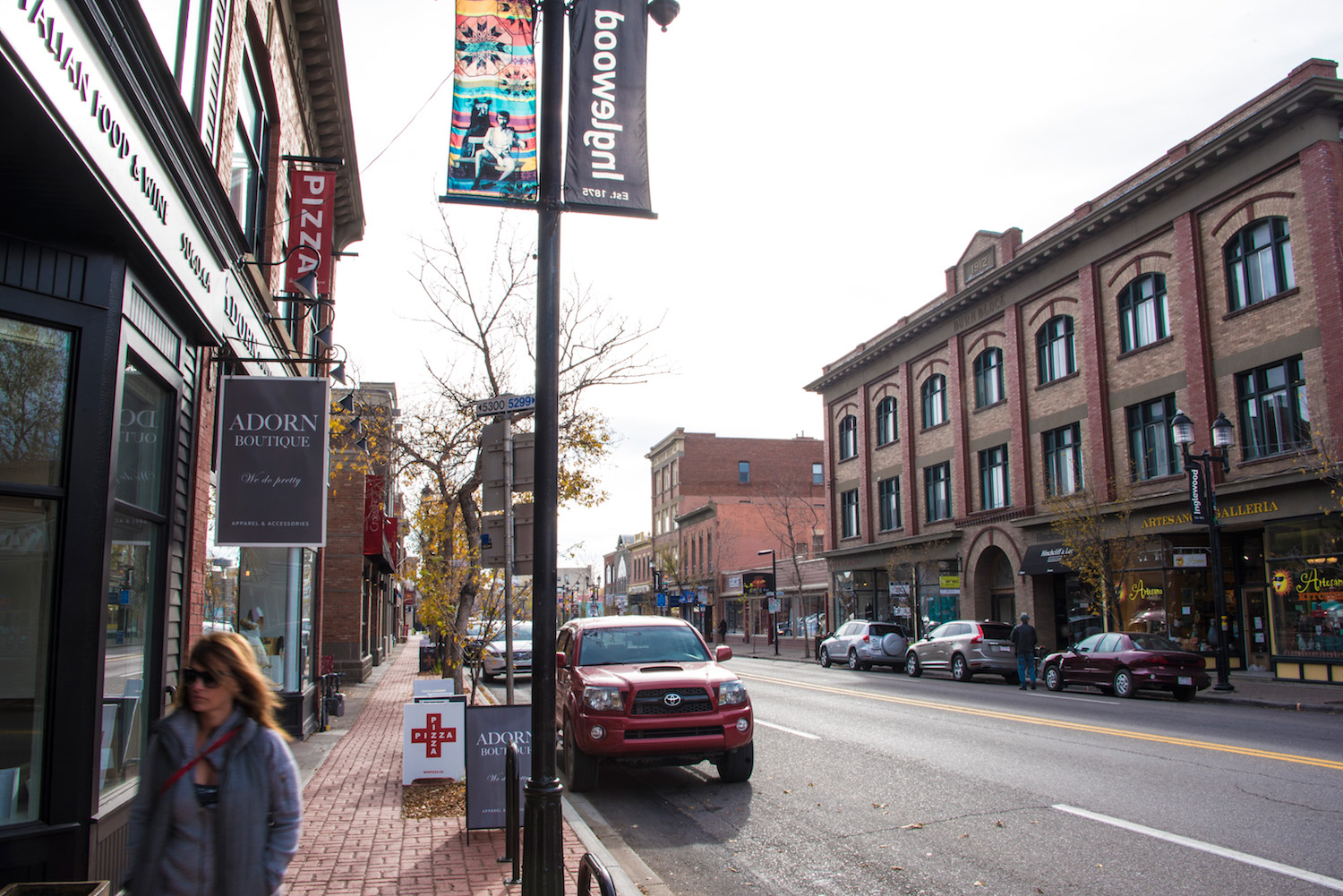 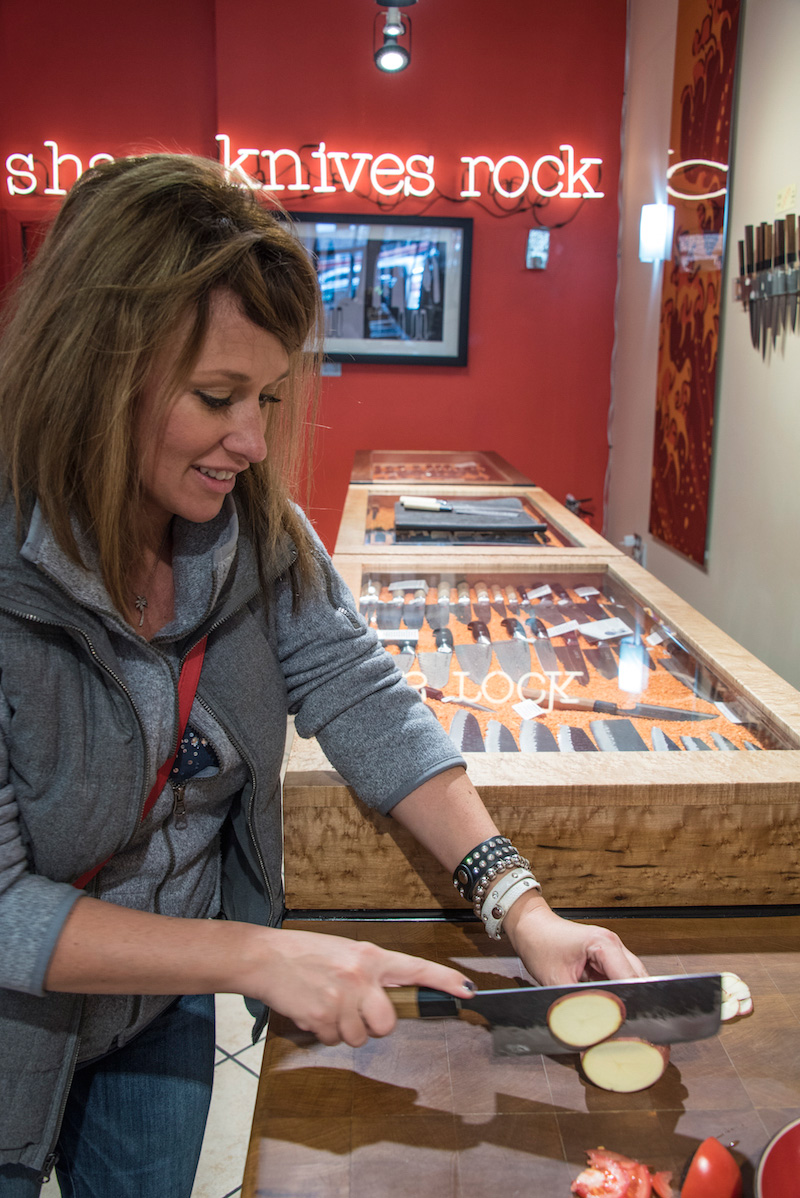 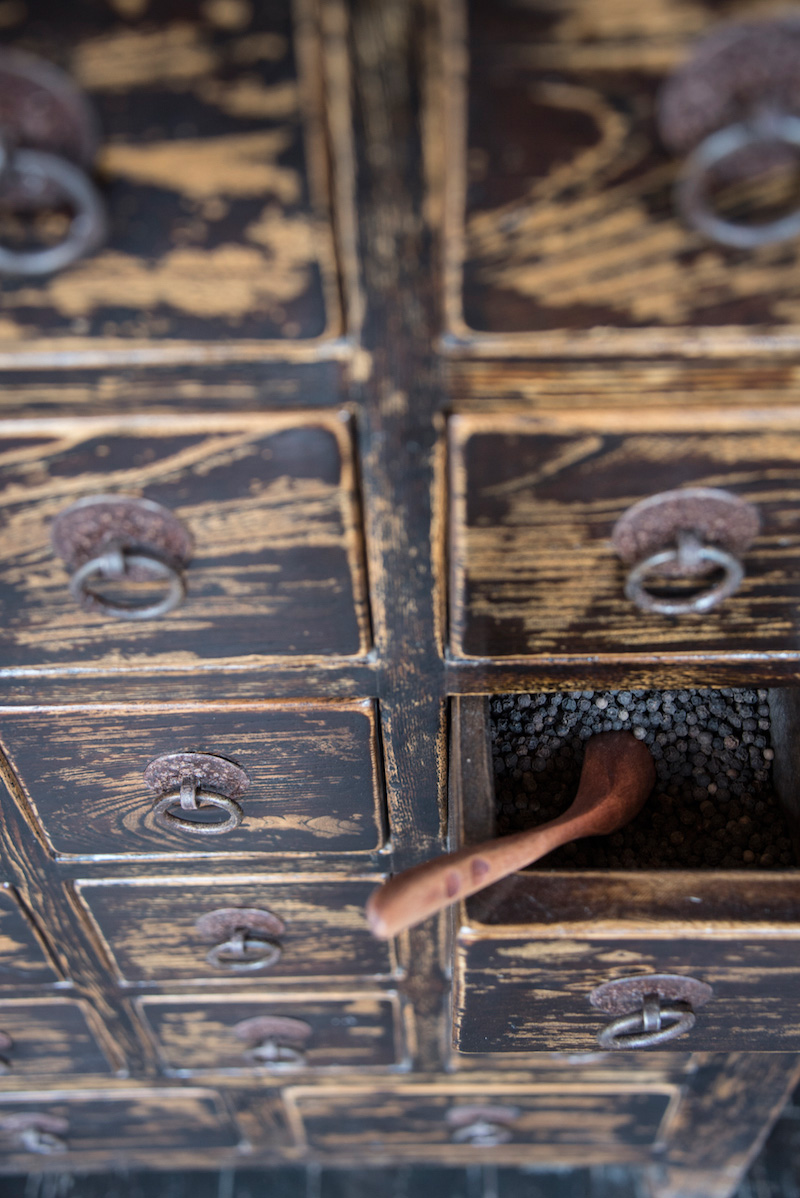 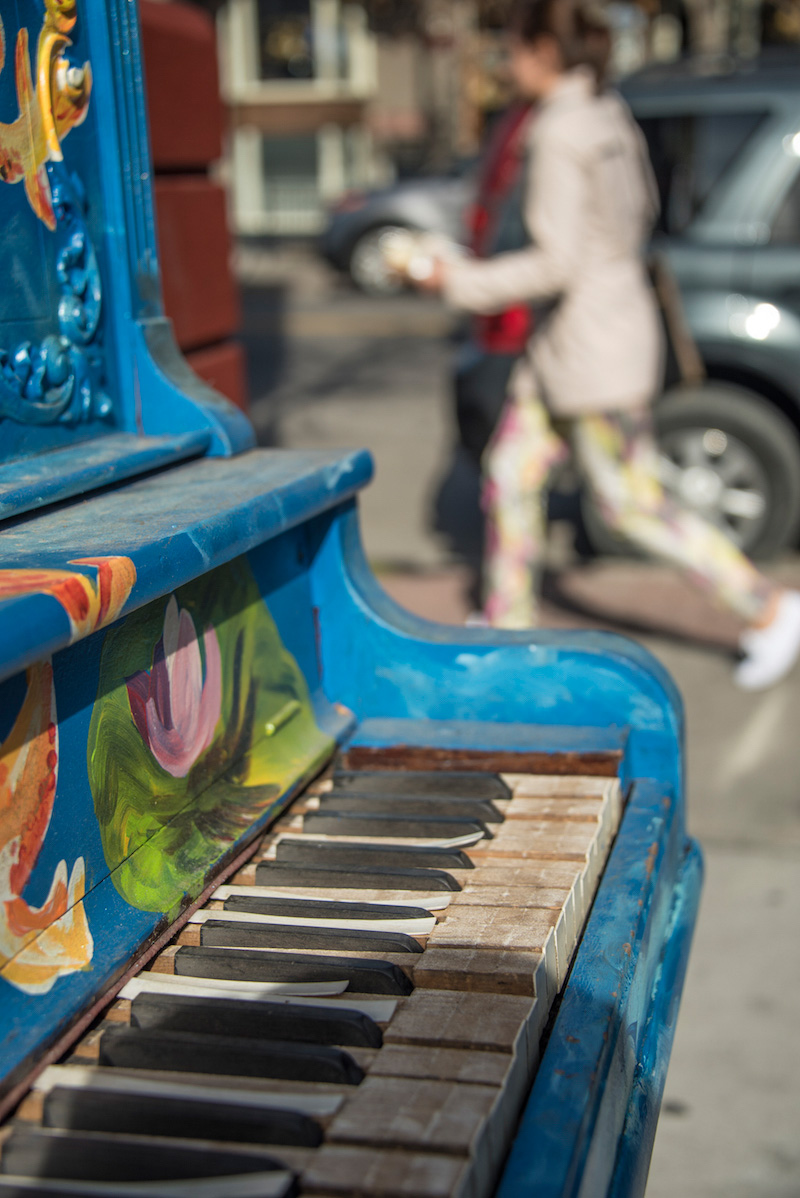 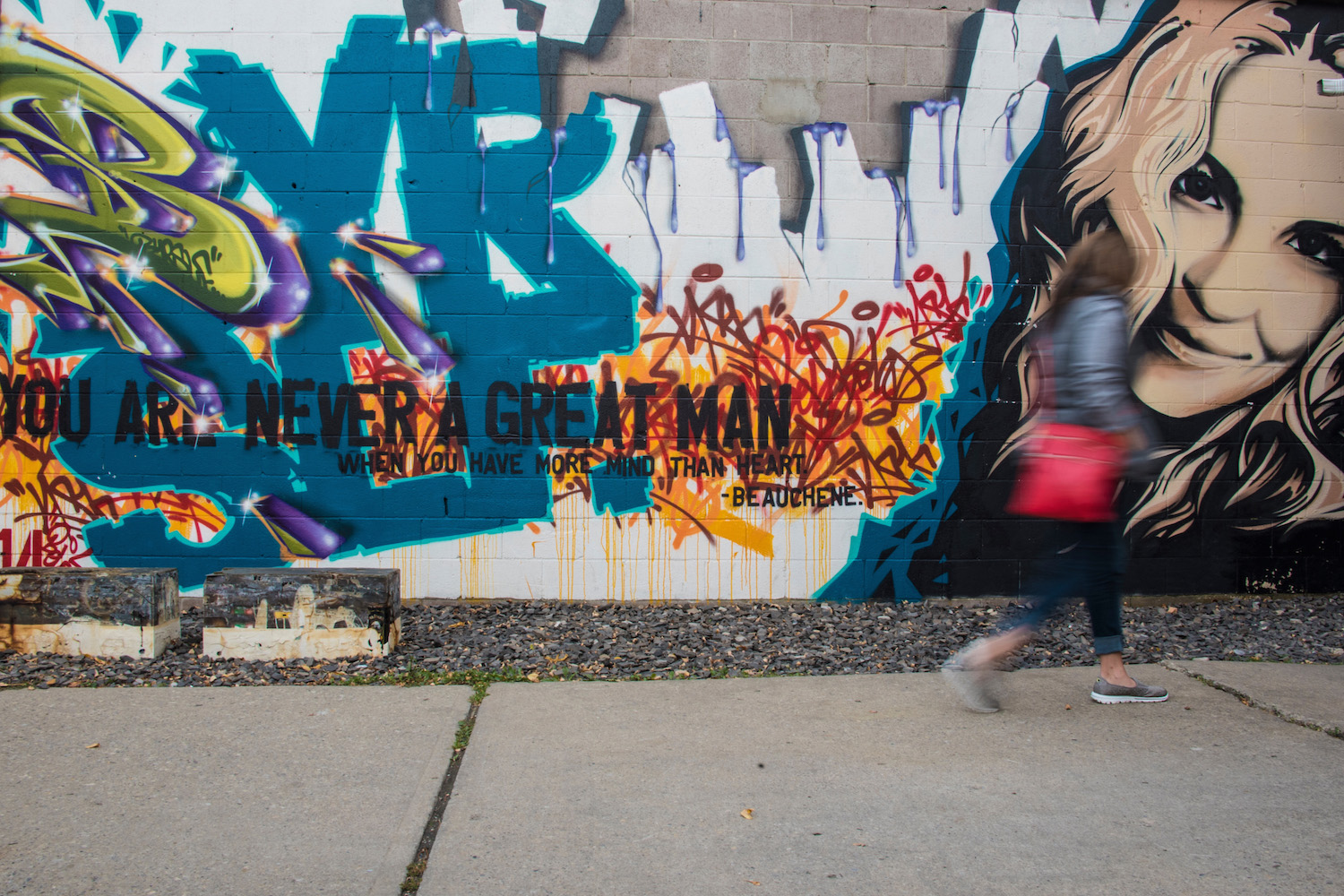 “If you guys had more time here,” said Michelle, a reader of my blog who was kind enough to meet us at Brasserie in Kensington, another of Calgary’s quaint urban corners, “I’d give you a list of a dozen nooks and crannies to explore.”

Andrea from Tourism Calgary, however, seemed less convinced that this was necessary.

“This place is the best,” she said, referring to her home neighborhood of the Mission, whose Añejo restaurant served as our dinner spot that night.

(I’m happy to report its take on Tex-Mex, which features artisanal cocktails, plus globally-inspired tacos and guacamole made tableside, also survived my Texan scrutiny.)

Mission, to be sure, was not entirely unreminiscent of, well, Austin, with small, independent restaurants, shops and bars outnumbered only by colorful condo blocks and attractive young people.

“I can see why you would say that,” I said, and took a sip of my cilantro-cucumber margarita, and looked out at the lively streets bathed in the last light of day. “It’s definitely a city entering its Golden Age, in more ways than one.”

Where the buffalo roam

It’s impossible to appreciate Calgary (or Alberta or even Canada, for that matter) without paying respect to the people who lived in this part of the world for thousands of years before any of these words meant anything.

The best place to do this, provided that you have a car or don’t mind hiring a taxi for the day, is Head-Smashed-in Buffalo Jump, a UNESCO World Heritage site located approximately 90 minutes south of Calgary on Highway AB 2.

Its name, in addition to being rather bizarre, is also quite literal. The museum and cultural center is perched at the top of a large cliff where the native Blackfoot people hunted herds of buffalo, an animal that was central not only to their survival, but to their spirituality and even their creation story.

But you’ll get much more than a history lesson at HSIBJ, particularly if you’re lucky enough to speak with a Blackfoot man named Little Leaf. 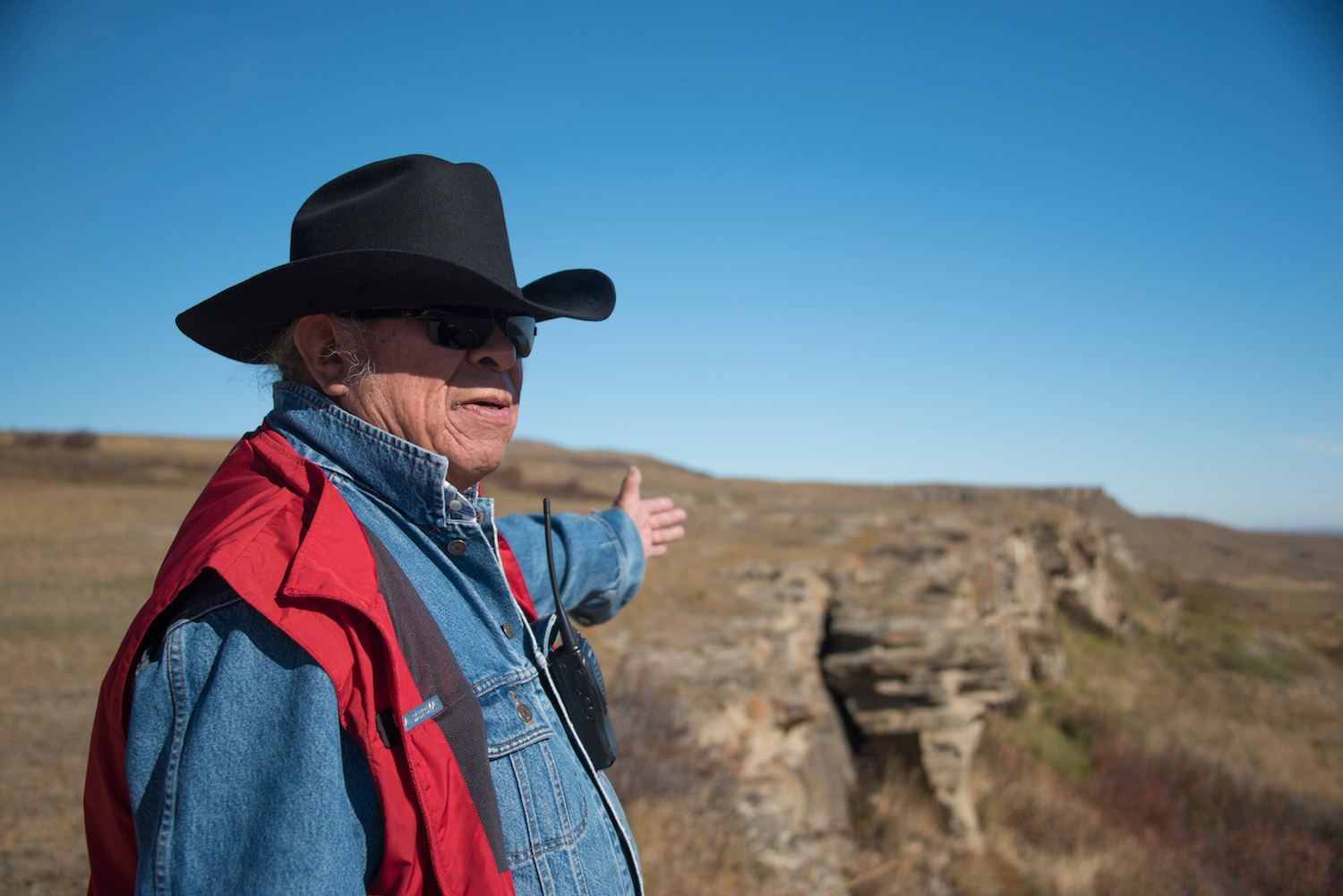 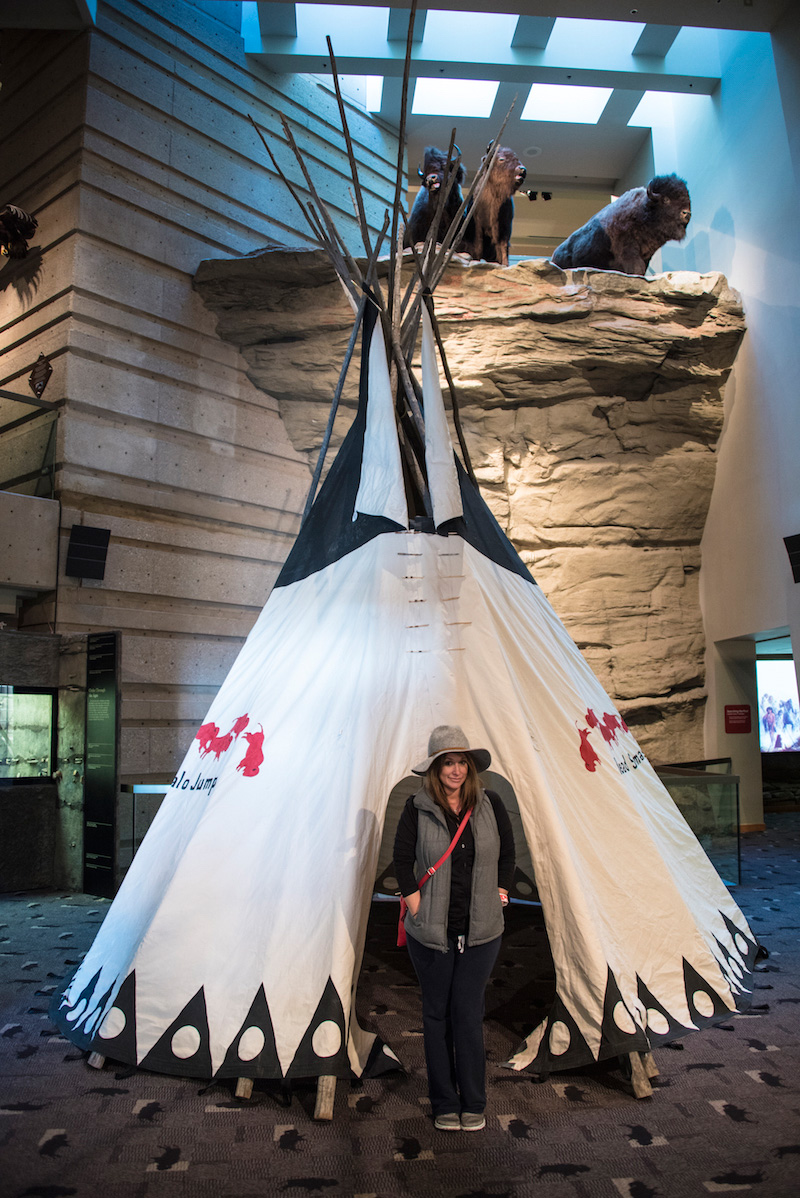 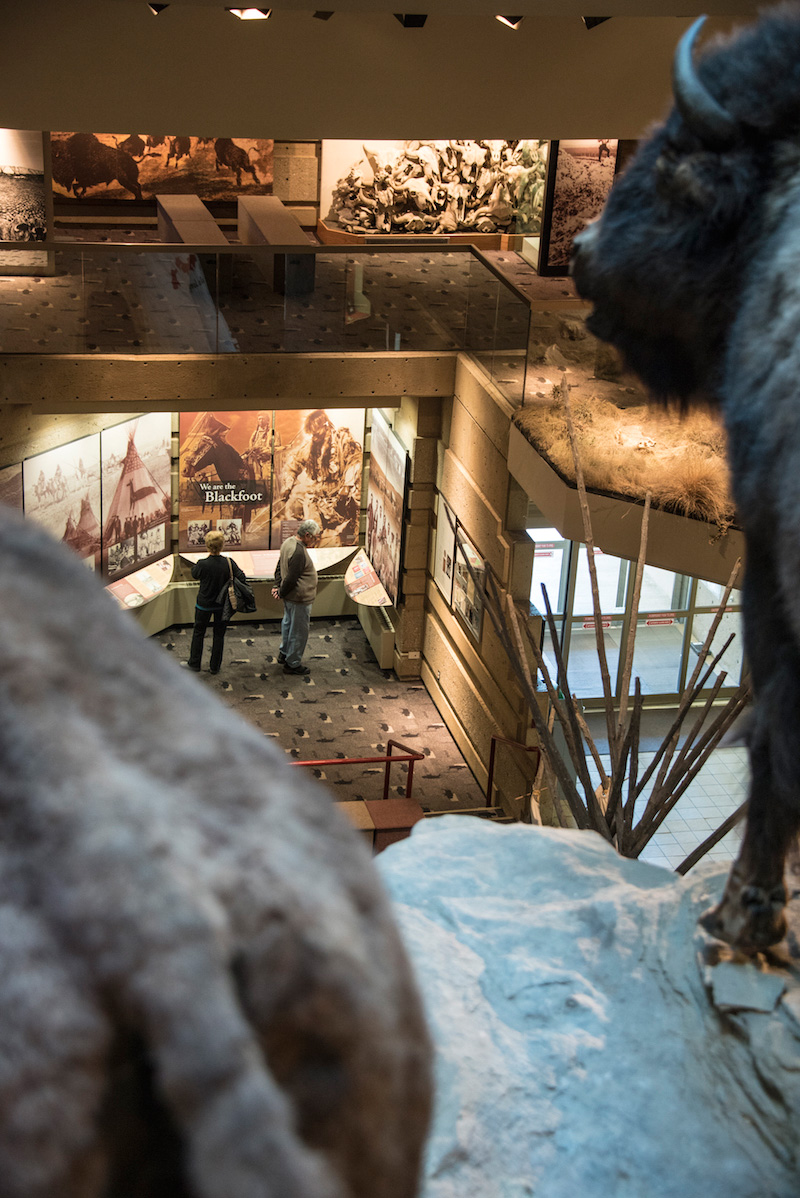 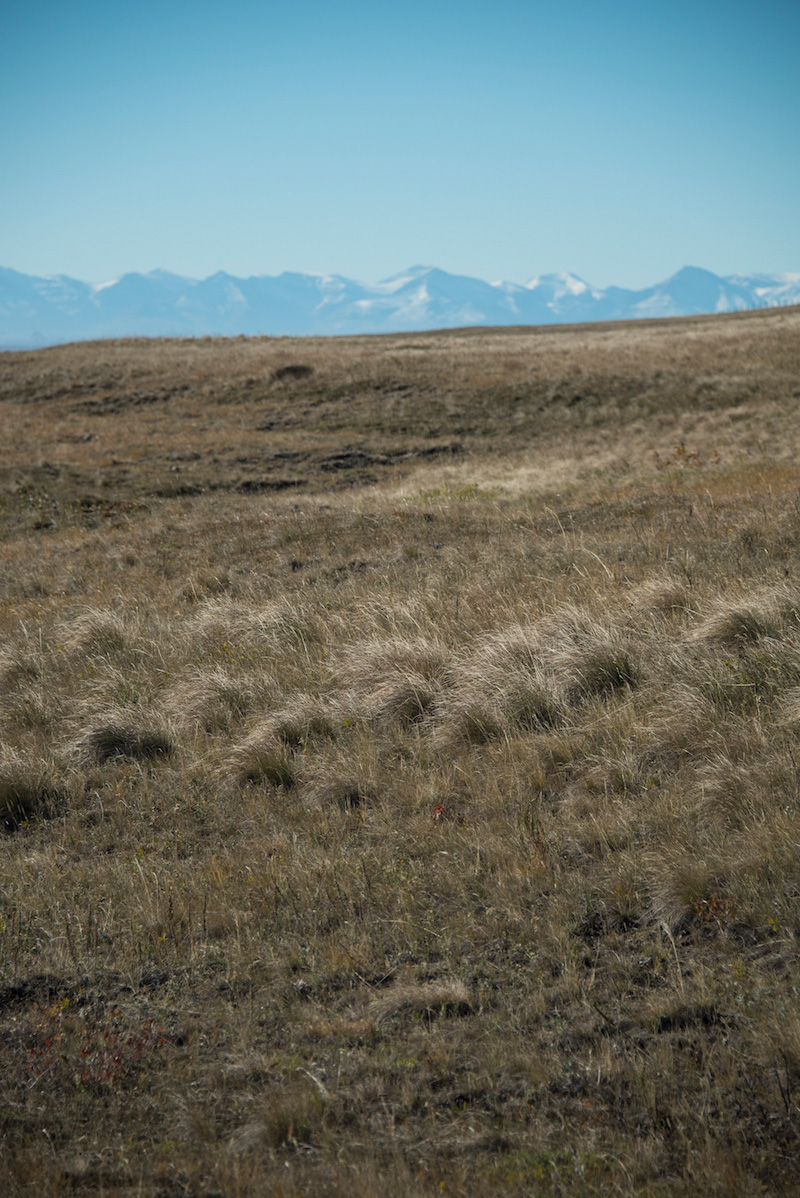 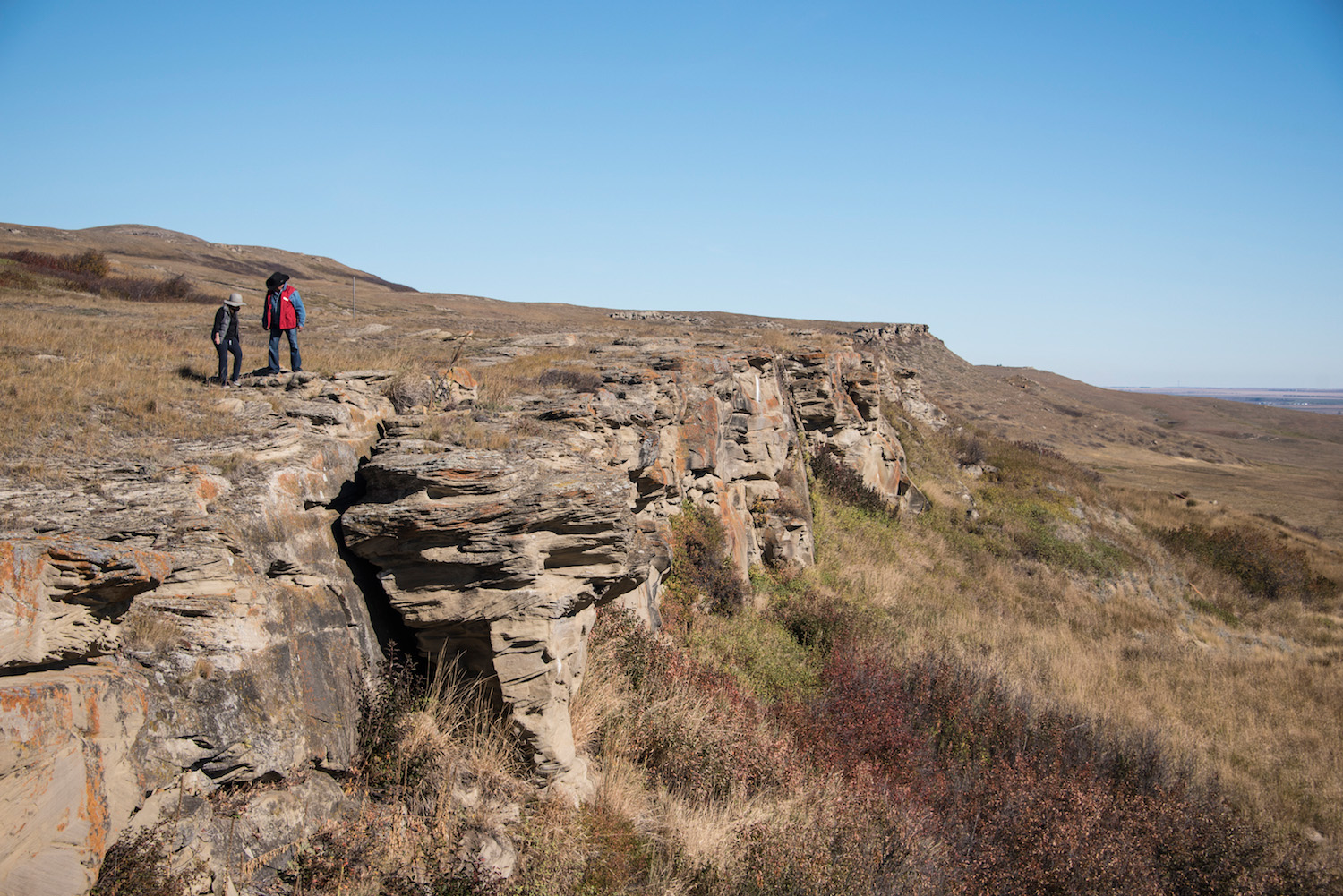 “People come here and meet with me looking for information,” he explained as we walked along the cliffside, from which you can see into the United States on clear days. “But they leave with something much deeper, whether that’s an appreciation of my people, a curiosity about native spirituality or even a sense of inner peace that words can’t describe.”

Neither words nor pictures can describe the impact visiting the site had upon me, so I should quit while I’m ahead. Whether you do so as part of a road trip exploring Alberta, like Stephanie and I were lucky enough to do, or just because, get yourself to Calgary.

Where to Go After Calgary

Calgary is where your trip to Alberta is likely to begin, but it definitely won’t end there. Here are a few ideas on where to go after you finish up in Calgary:

Need extra help deciding how many days in Calgary to spend, or putting together a larger trip to Alberta or Canada? Consider hiring me as your Travel Coach!

How long should you spend in Calgary?

As a general rule, I’d recommend spending at least two full days in Calgary, although with three you’ll have more breathing room. This will also allow you to take a day trip somewhere, probably to the Head-Smashed-In Buffalo Jump historical site located just south of the city.

How many days do you need in Calgary and Banff?

If you fly to Alberta in order to visit only Calgary and Banff, spend between 5-7 days between the two of them. That will probably entail 1-2 days in Calgary on the front end, 2-4 days in Banff and then potentially one night in Calgary before you fly out at the end of your trip.

Is it worth staying in Calgary?

Calgary is definitely worth at least one night, although it shouldn’t be the focus of your trip to Alberta. I find that, taken in the context of the rest of Alberta, Calgary makes sense in a way it might not on its own. To be sure, if you don’t stay a day or two here to see Calgary for what it is, you’ll never reach this conclusion.

Regardless of how many days in Calgary you end up spending, I hope this post has helped you plan your trip. Some travelers will simply stay a night here in preparation—and anticipation—of a wilder adventure in Banff and beyond, while others will dig into Calgary’s underrated neighborhoods and impressive dining scene and really try to get to know the city. No matter which camp you fall into, I think Calgary will charm you, and maybe even prove downright impressive. If you need personalized help planning your trip to Canada, I hope you won’t hesitate to hire me as your Travel Coach.

A big thanks to the folks Tourism Calgary and Hotel Arts whom, in addition to the team at Travel Alberta, organized and paid for my three days in Calgary.