I was of two minds when my plane landed in Tbilisi, Georgia. On one hand, I was terrified. The turbulent history of the Caucasus saw half a dozen empires spill the blood of hundreds of thousands of people. While I know that today’s Caucasus (at least the part I planned to visit during my Caucasus itinerary) is not actively at war, I couldn’t help but wonder if some volatility would linger.

I was also oddly confident – maybe even cocky. The relatively small geographical footprint of the region seemed easily conquerable (for lack of a better word), especially when compared to my previous destination (the massive, sprawling Brazil), to say nothing of how incredibly simple travel in Georgia proved during my first few days there.

And yet I knew from my experience as a traveler that it was my duty to mercilessly second-guess my first impressions, so you might say I spent my 2 weeks Caucasus itinerary waiting for the proverbial “other shoe” to drop – it eventually did. I proudly present to you my Georgia Armenia Azerbaijan itinerary.

When to Visit the Caucasus

I visited the Caucasus during the hottest part of summer, which was fine for me given my Texan heritage, but might be too much for some people, especially mainland Europeans. On the other hand, winter is also a great time to visit the Caucasus, particularly in the mountains of Georgia, where Swiss-style skiing can be enjoyed at bare bones prices. Note that if you don’t plan to see the entire Caucasus in 2 weeks—Georgia, Armenia, Azerbaijan—your decision will depend more on weather in each individual country.

Where to Stay in the Caucasus

A small number of hostels exist in big Caucasus cities such as Tbilisi, Baku and Yerevan, although most are not very good. Indeed, I found the best places to stay were either apartments (such as this lovely one in Tbilisi) or affordable luxury properties Rooms Hotel Kazbegi, which provides panoramic views of the Caucasus Mountains.

How to Get Around in the Caucasus

Transportation for your Caucasus itinerary will consist mainly via small vehicles, which are called matrushkas in Georgia and Armenia. You can also travel by train between certain places (for example, between Tbilisi and Baku) or by plane, although flights in the Caucasus tend to be expensive due to the relative lack of competition. Because of the relative difficult of getting to Azerbaijan, some travelers simply decide to plan a Georgia and Armenia itinerary, even though I personally think more comprehensive travel—Georgia, Armenia, Azerbaijan—is worth the expense.

All three Caucasus countries use different currencies—the Georgian lari, the Armenian dram and the Azerbaijani manat—and while cross-border acceptance rates are low, prices are as well in most cases, with the notable exception of Baku. Buying a SIM card in Georgia (which was by the far most enjoyable country in the Caucasus, for what it’s worth), was cheap and the service was fast.

Where to Go During Your Caucasus Itinerary

But let’s save the doom and gloom for later. As I mentioned, Georgia was an incredibly easy, enjoyable destination, starting with the two days I spent exploring the charming capital city of Tbilisi. A conspicuously European city spread across either bank of a river that runs mostly dry, Tbilisi will definitely be the hub for Caucasus travel (and an essential part of any Georgia itinerary) whenever the regional tourism industry finally blows up – I imagine that will be soon. 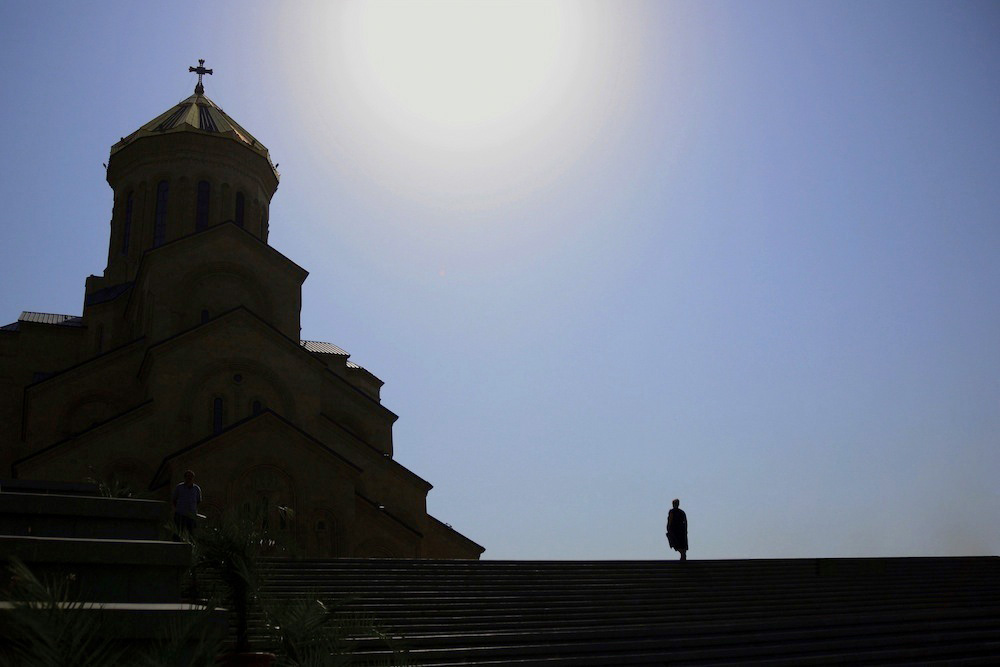 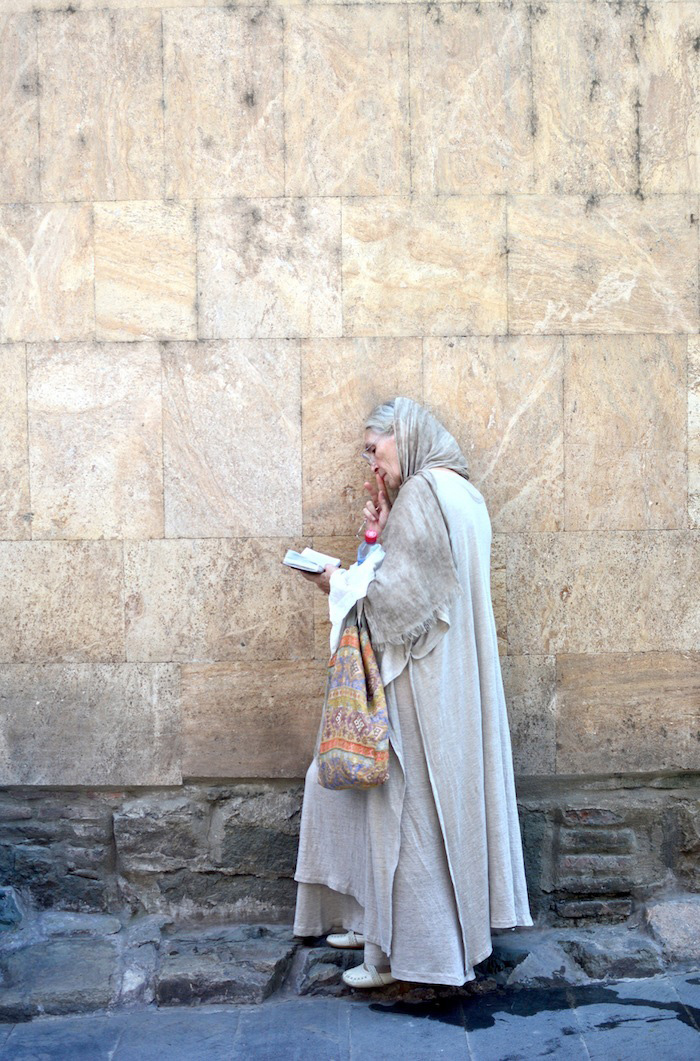 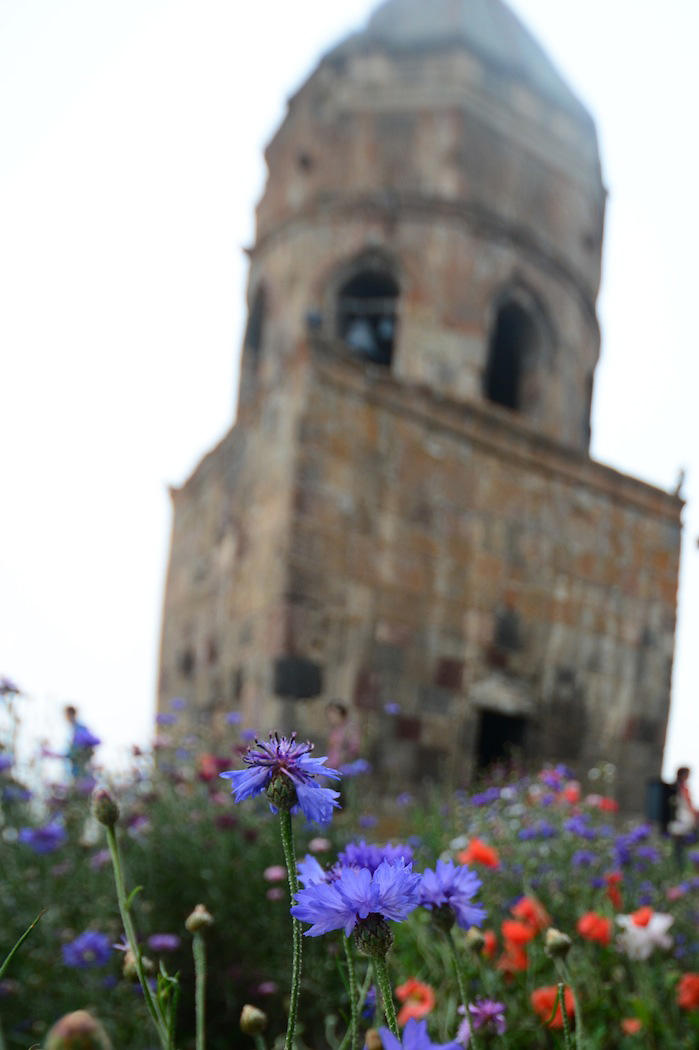 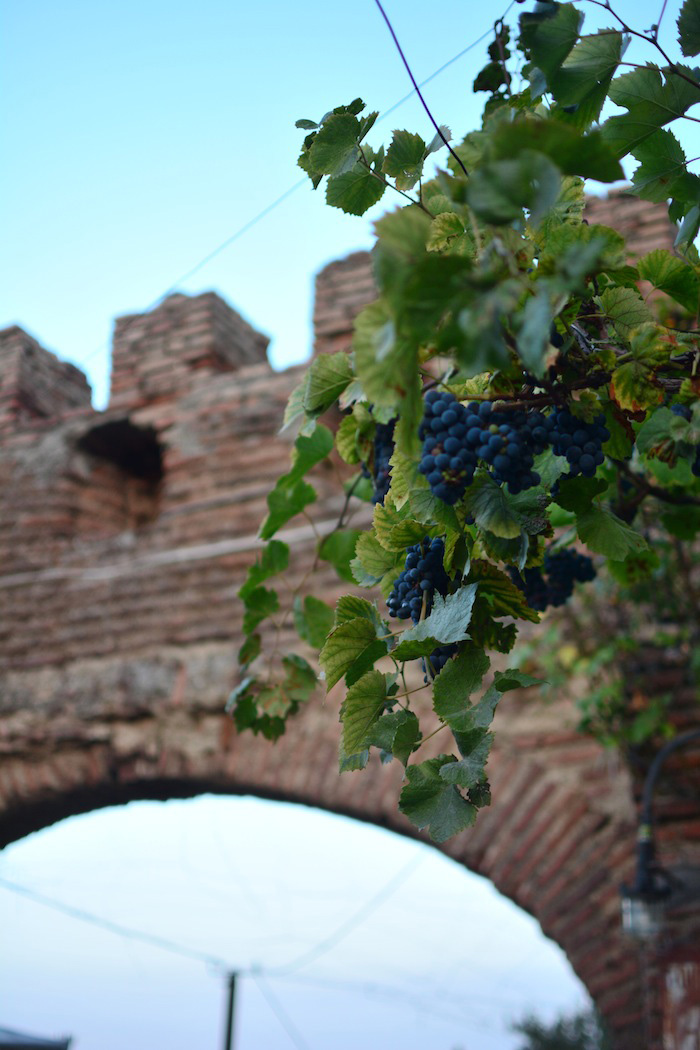 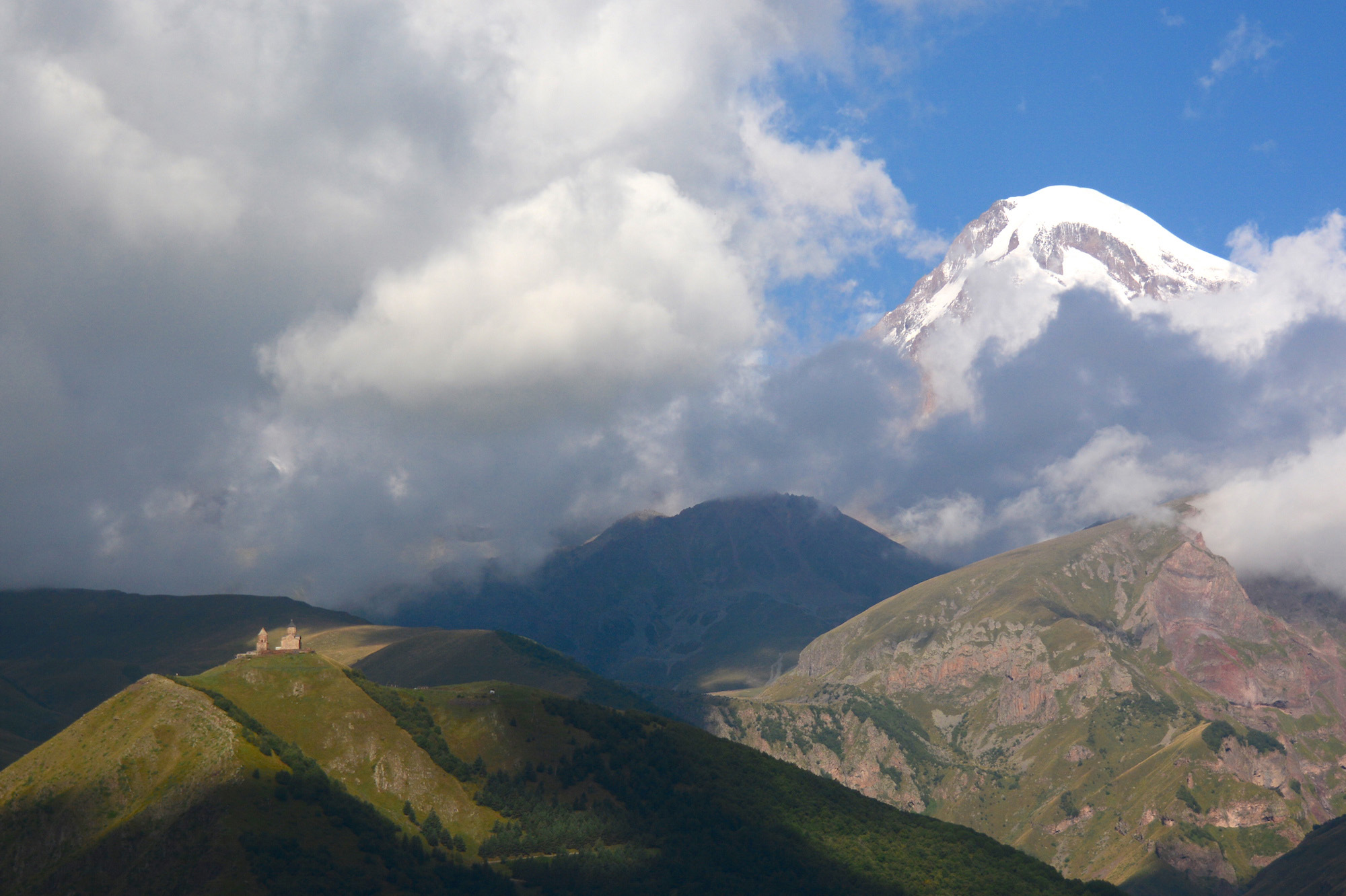 Tbilisi’s location is convenient not only within a larger Caucasus travel itinerary, but within Georgia itself. You can see most of Georgia’s major destinations, from the picturesque foothills of towering Mt. Kazbeg, to the cliff-hewn monastery at David Gareja, to the charming, fortified town of Sighnaghi, on a day-trip from Tbilisi.

I chose to stay a couple nights each in Sighnaghi and Stepantsminda, the principal town in the Kazbegi region, and would’ve headed to the mystical Svaneti region and Batumi on the Black Sea if I’d had 2 weeks in Georgia or longer. Overall, I recommend using between 4-7 days of your Caucasus itinerary to visit Georgia (not including necessary stopovers between Azerbaijan and Armenia, which I will detail in subsequent paragraphs). Not that if you’re looking for a Georgia Armenia itinerary, you should skip the section that immediately follows this one.

And by “subsequent paragraphs,” I mean right now. You see, Armenia and Azerbaijan are at war over a small pocket of land called Nagorno-Karabakh, which is officially part of Azerbaijan, but claimed by Armenia, and has actually expressed its desire to be an independent republic altogether. Confusing, right?

The point is that Armenians and Azerbaijanis sort of hate each other (the latter much more than the former), which means that you have to be strategic about how you travel between them. I highly, highly recommend visiting Azerbaijan first. It’s also important to note that while you can obtain an online visa to Armenia (which I will detail in a few more paragraphs), the Azerbaijan visa process is more exhaustive and complicated. I recommend contacting these people, who will sort you out, albeit at a very, very steep price relative to the rest of your Georgia Armenia Azerbaijan itinerary. 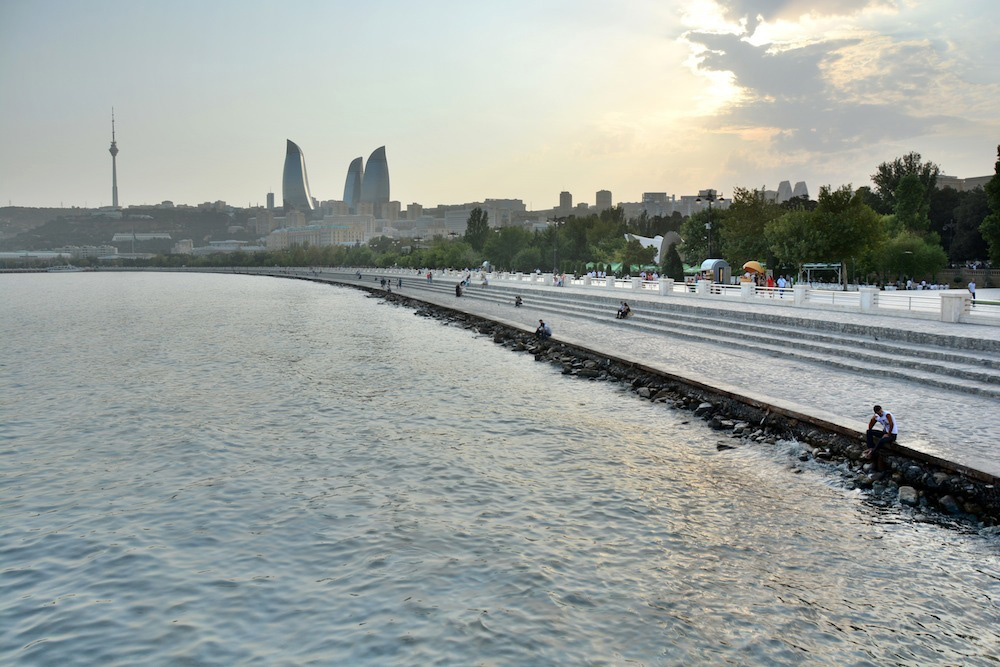 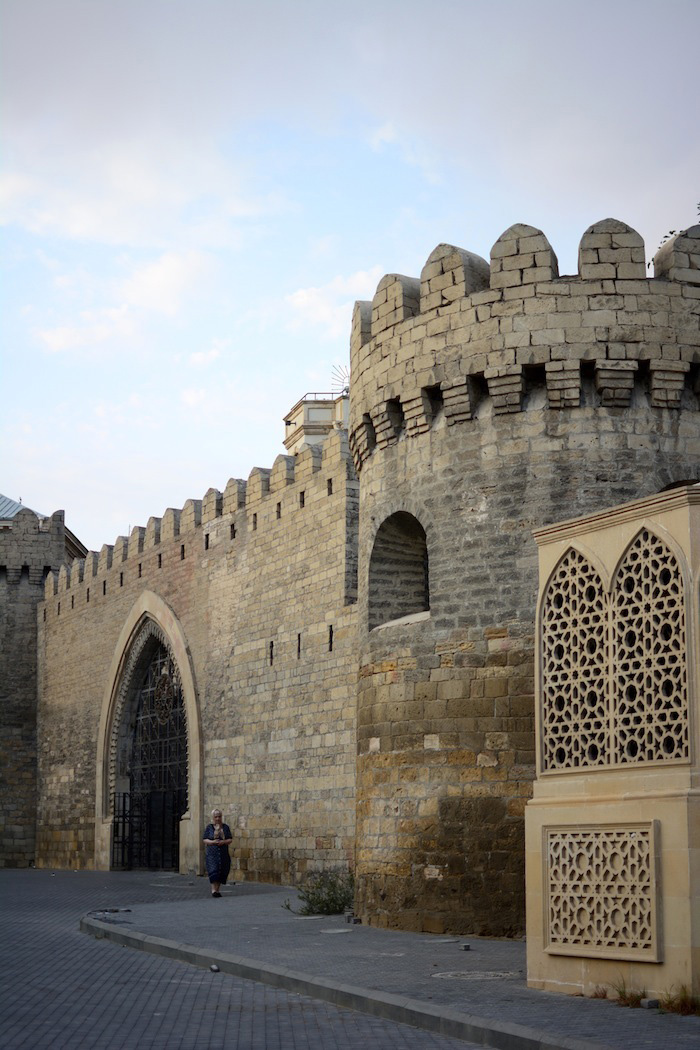 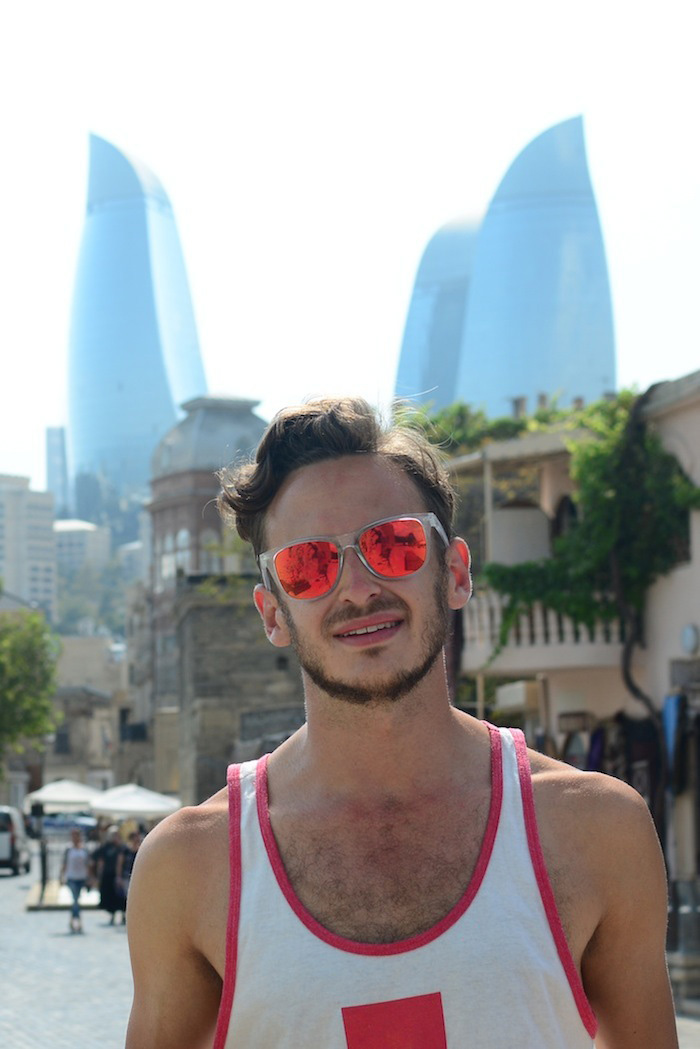 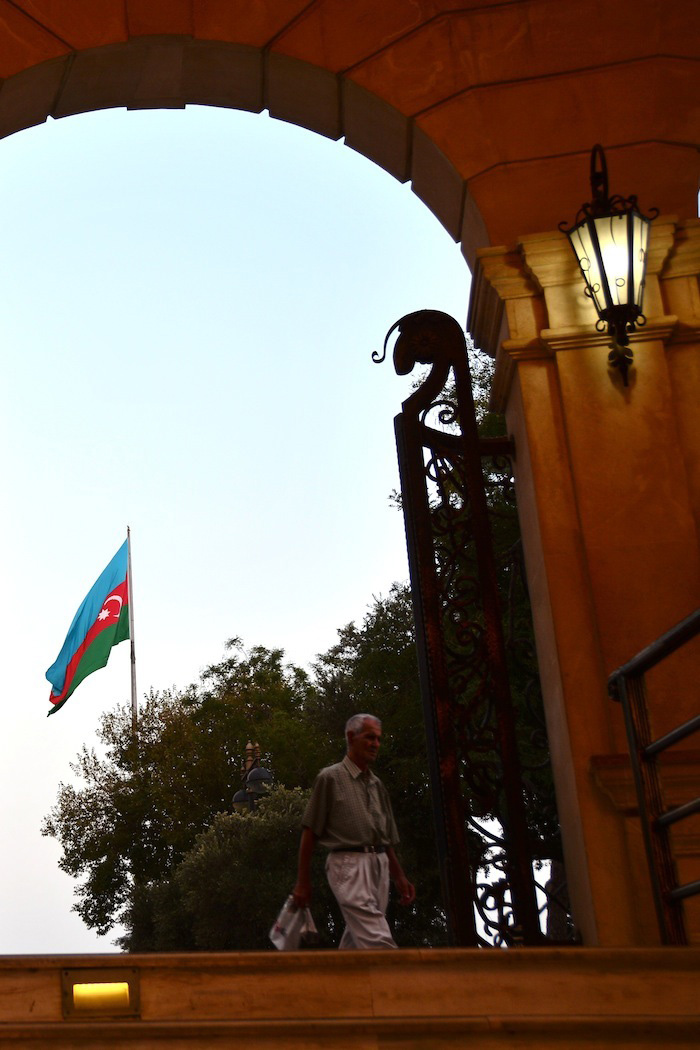 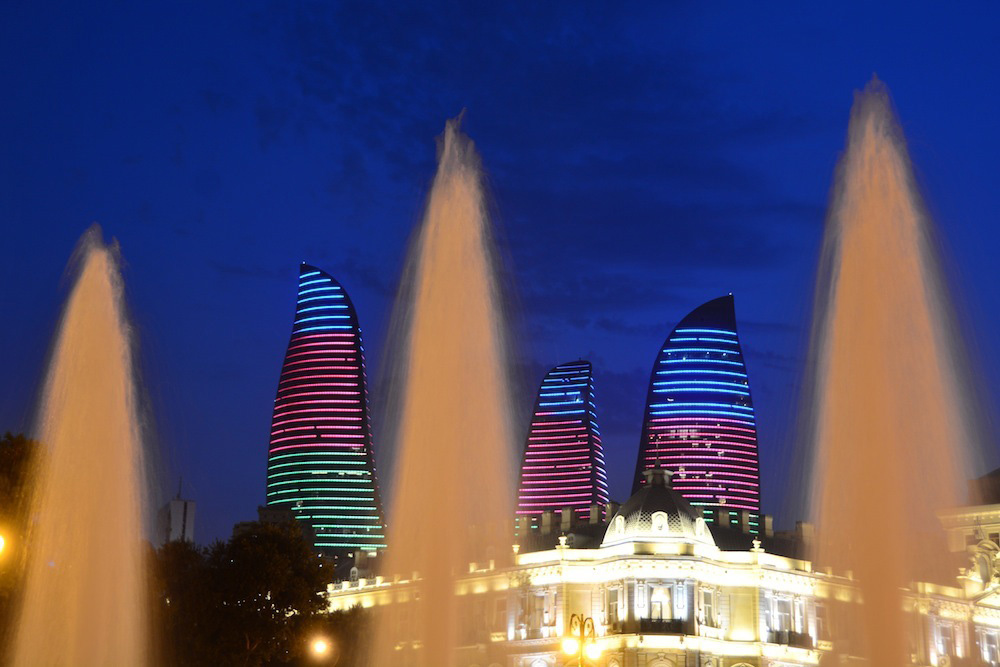 To be sure, what immediately separated Azerbaijan from Georgia for me was the extremely high cost of everything. In fact, had it not been for the fact that run-down hotels in the sleepy mountain towns of Qax and Sheki were going to run me as much as my fancy four-star in the country’s oddly Parisian capital city, I would’ve actually stopped there. Instead, my entire trip to Azerbaijan consisted of two days in Baku, plus the overnight train inbound from Tbilisi.

In spite of its short duration, I found my trip to Azerbaijan totally satisfying. Baku is an absolutely captivating city, like a smaller, less-fake version of Dubai. With this being said, I do think I would’ve gotten bored with even one more day in Baku, so keep in mind that while I recommend spending 2-4 days of your two weeks in the Caucasus in Azerbaijan, you should remain on the low end of this range unless you’re able to better organize your journey into the small towns I mentioned above than I was.

The good news about Armenia, as I mentioned above, is that obtaining a visa is simple (just click here) and cheap, at just $10. The bad news is two-fold: 1) I had to return to Georgia before traveling onward to Armenia and 2) My short time in Armenia was probably the most stressful period of time in all my years of travel, a sad truth I wrote about in a dramatic post published just a few days after I departed. (WARNING: I did dare to invoke Cher and Kim Kardashian, the two most famous living members of the Armenian race).

This isn’t all Armenia’s fault. I mean, it’s home to some of the most stunning attractions I saw during my entire Caucasus travel itinerary, from the breathtaking Lake Sevan (which, for my money, is more beautiful than both the Caspian and the Black Seas), to Geghard monastery, to the Roman Temple of Garni, three places I saw in one day on an incredible tour with the folks from Envoy Hostel. I also really wanted to visit the legendary Tatev monastery, but unfortunately wasn’t able to, for reasons I detail in my above-linked post. 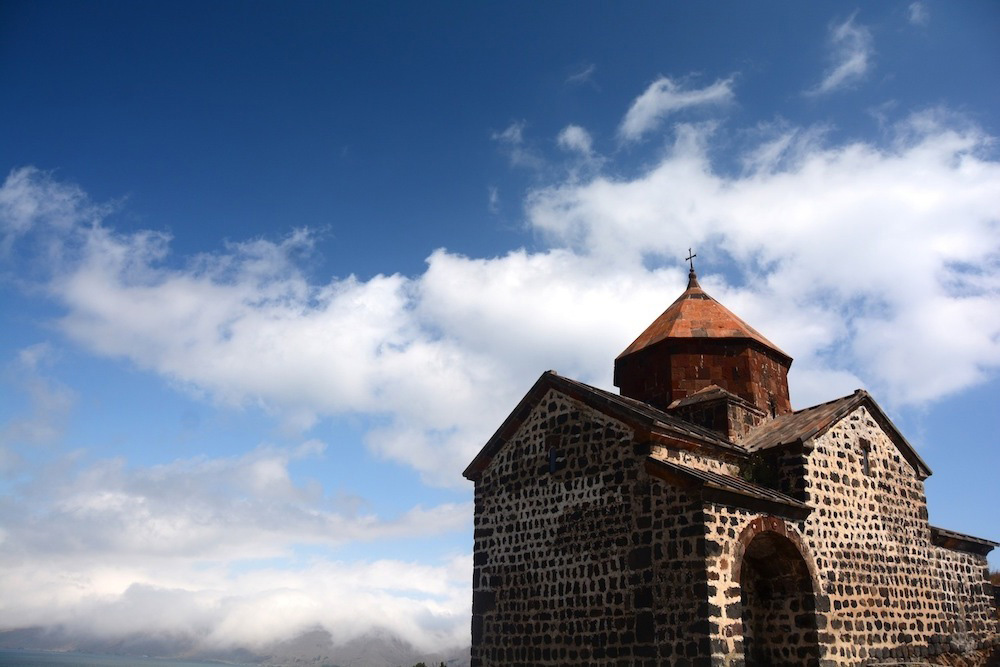 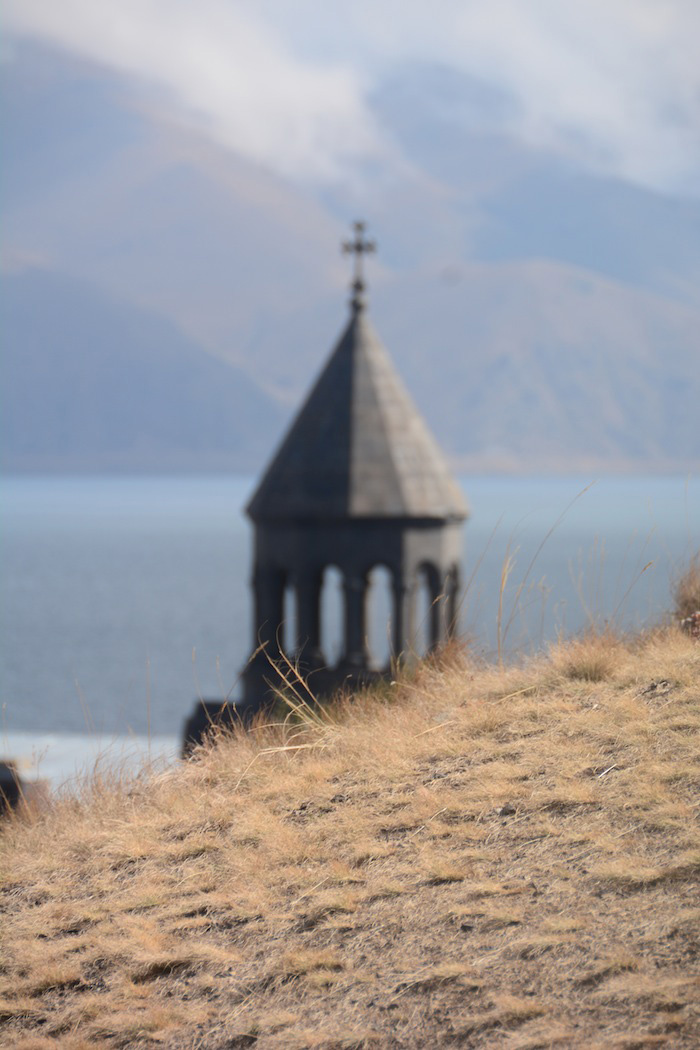 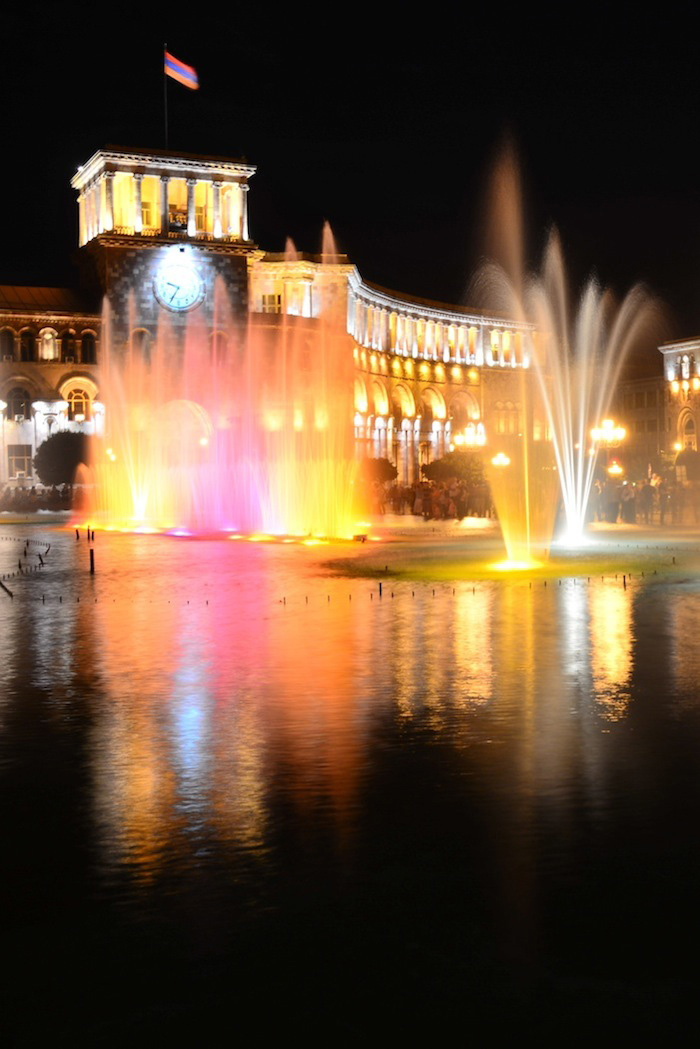 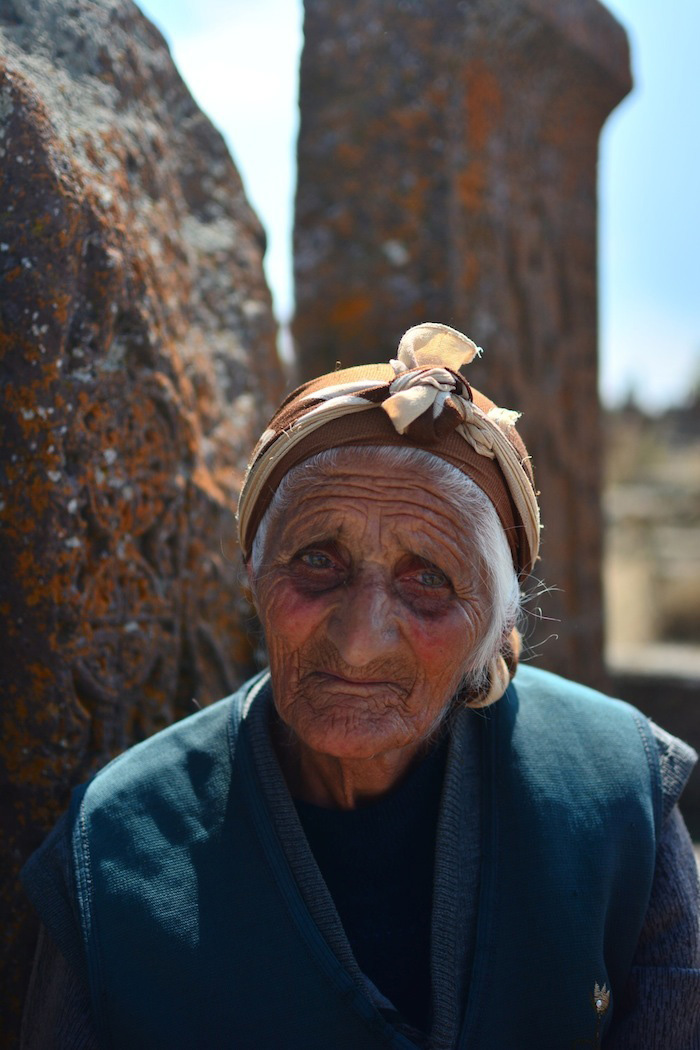 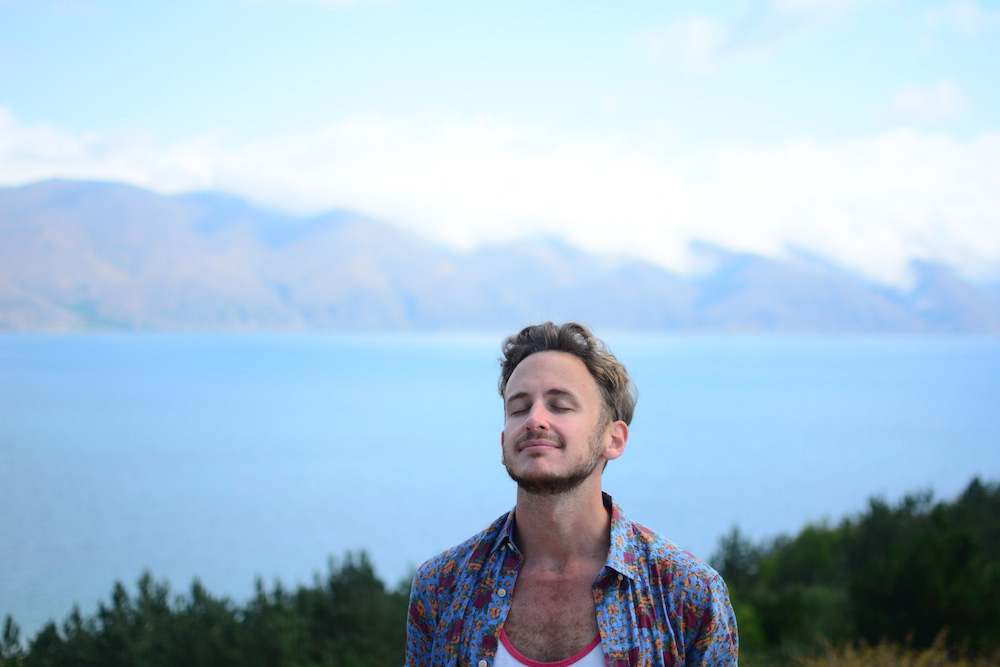 The highlight of my short time in Armenia was undoubtedly my stay at the Tufenkian Heritage Hotel in Yerevan, Armenia’s capital. The hotel itself was wonderful, located right in the center of Yerevan, constructed using only locally-available materials, and staff by some of the kindest and most hospitable people I’ve ever met. But there’s something more about Tufenkian, which I have only experienced at a select few other hotels throughout my long career as a traveler.

For one, the Tufenkian brand has an interesting backstory, having been founded by the man credited with resurrecting Armenia’s carpet-making industry following the Soviet period, and an equally interesting philosophy: They aim not only to promote themselves internationally, but also the country of Armenia as a whole. Tufenkian has several hotels throughout Armenia and I highly, highly recommend staying in at least one of them during your time in Armenia – between 3-5 days of your two weeks in the Caucasus, or perhaps a little longer if you’re simply traveling a Georgia and Armenia itinerary.

I structured my Georgia Armenia Azerbaijan itinerary as follows (transport is overland unless otherwise noted):

If I could re-write my 2 weeks Caucasus itinerary for the purposes of this Caucasus travel blog, however, it would probably look something like this:

Note that you can mix-and-match within this frame. For example, with a 2 week itinerary, Georgia and Armenia can be the focus, or you can omit Armenia and just visit Georgia and Azerbaijan.

Other FAQ About Travel to the Caucasus

Is it safe to travel to the Caucasus?

The Caucasus is a relatively safe part of the world, although certain hazards do exist. Most importantly, you’ll want to avoid active conflict zones, such as Nagorno-Karabakh (between Armenia and Azerbaijin) and South Ossetia, which often sees fighting between Georgian and Russian troops. Secondly, while violent or even petty crime is rare in the Caucasus, traffic accidents are very common.

How many days should I spend in Armenia?

I recommend spending a minimum of 2-3 days in Armenia. Basing yourself in Yerevan, this will allow you to visit Lake Sevan and Garni/Geghard, and also to visit legendary Tatev Monastery.

How safe is Armenia?

Armenia is about as safe as the rest of the Caucasus nations. However, as I articulated in an earlier answer, you will want to avoid spending time in the disputed territory of Nagorno-Karabakh. Regardless of your opinions on the conflict, it’s simply not a good idea to hang out here.

You might be in search of tips for 2 weeks in Georgia, or be curious about the entire Caucasus region like I was. Either way, this Caucasus itinerary is a great starting point for any Caucasus trip. After spending an immensely pleasurable few days in Georgia, you’ll struggle through the trials and tribulations of traveling the almost-warring states of Armenia and Azerbaijan, but hopefully see both their high points in the end. Want your Caucasus itinerary customized? Check out my Travel Coaching services to learn more.