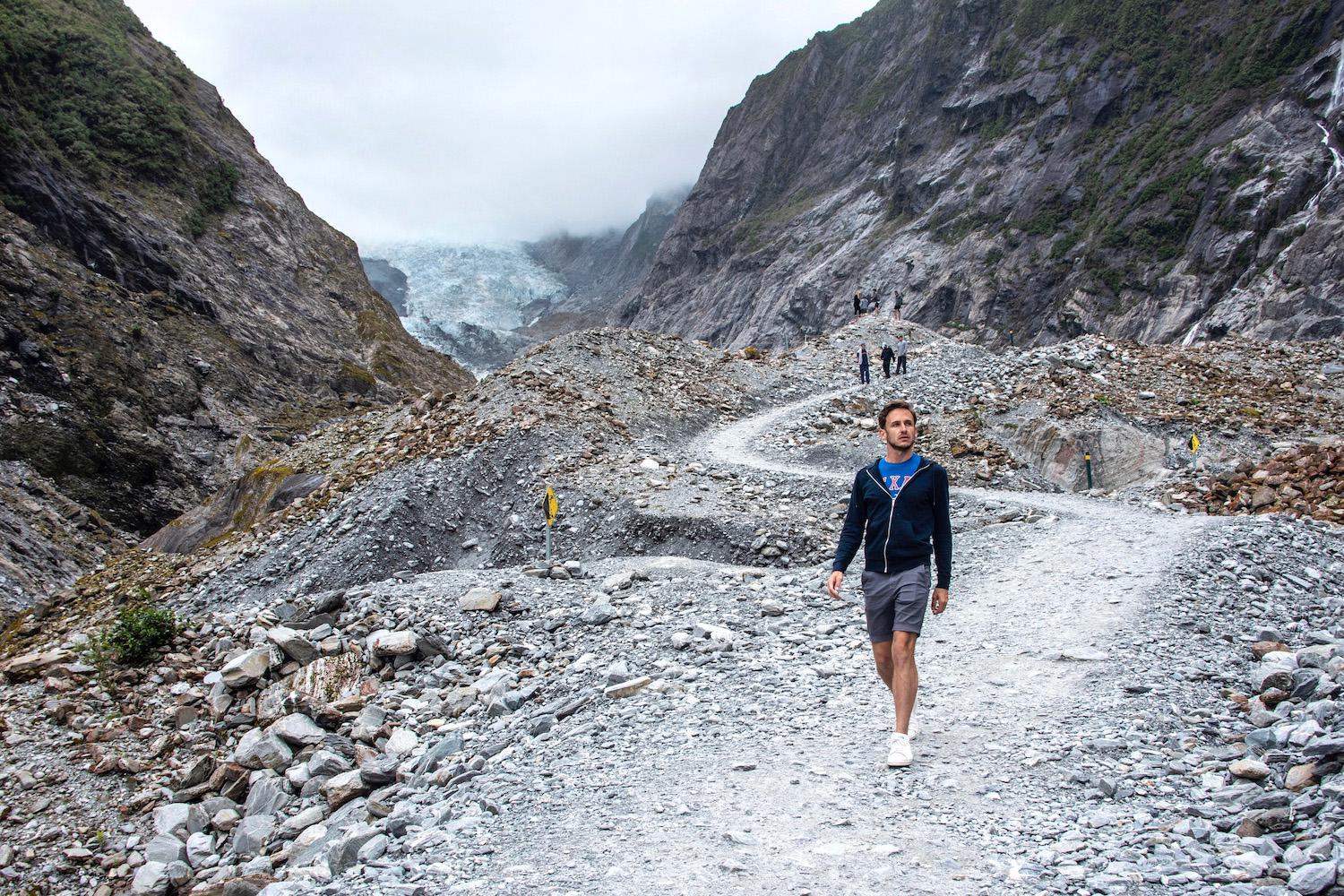 Leaving Queenstown Saturday morning, my Frank Josef Glacier walk was far from the top of my mind. Most immediately, I wanted to re-attempt the so-called Blue Pools Track—the pools, if you’ll recall, had been a murky brown when I stopped at them on my way in from Lake Tekapo and Aoraki.

Initially, I thought I might attempt to scale the Wanaka-area Roy’s Peak in time for sunset, but the poor sleep I’ve experienced throughout New Zealand continued during my three nights in the country’s self-proclaimed adventure capital. I wasn’t disappointed upon conceding that this was not going to happen; the sparkling aquamarine of the Blue Pools on this Sunday morning further convinced me I had made the right choice.

Distracted—that I definitely was, being that my country’s Senate was on the cusp of our criminal president; the state of Iowa was on the cusp of beginning a Democratic nominating process that would almost certainly see Trump re-elected. Mentally, I failed to cross any notable rubicon as I officially passed into the West Coast region of New Zealand’s South Island.

I declined to stop much along the long and winding road to the Tasman Sea. Most of the photo spots, to be sure, were waterfalls—how many of those have I seen in my life? It’s like churches in Italy, or temples in Thailand—beauty fatigue is an unavoidable part of travel in New Zealand, and I was in the throes of it during my last days in the country. 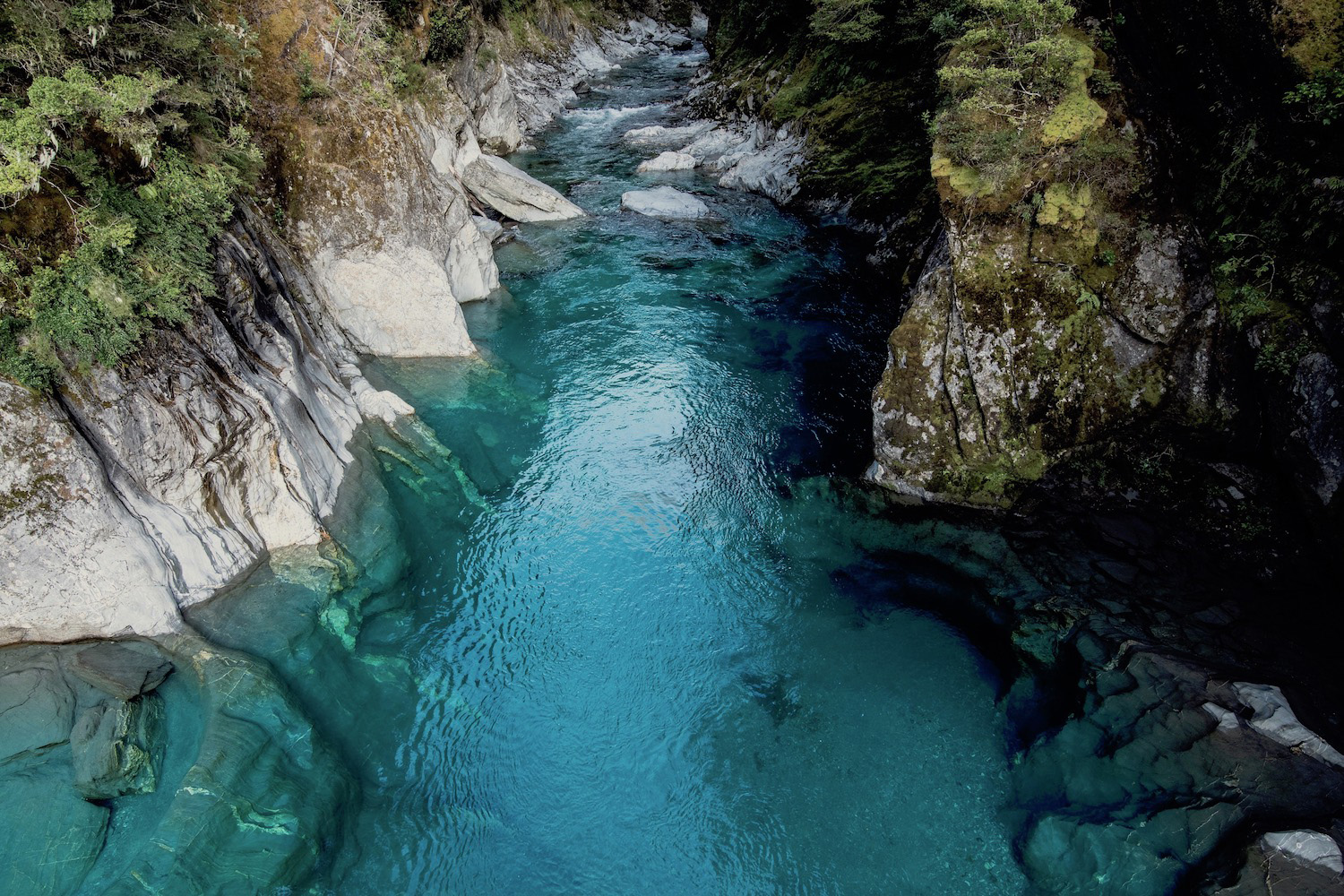 (Natural beauty, anyway. It was a delight, upon stopping in the town of Haast under skies far cloudier than the sapphire ones that had sparkled above the Blue Pools, to flirt with the handsome young Ethiopian man working the country. He told me it was his first day and that he was nervous; I told him he could get away with plenty of mistakes, given how handsome he was.)

I hoped the clouds would clear as I continued driving, but if anything, the gloom intensified. This would’ve been easy to overlook on its own, given how the grey complimented the lush, emerald brush adorning all the beaches along the way to the Franz Josef Glacier walk, were it not for the sand flies. 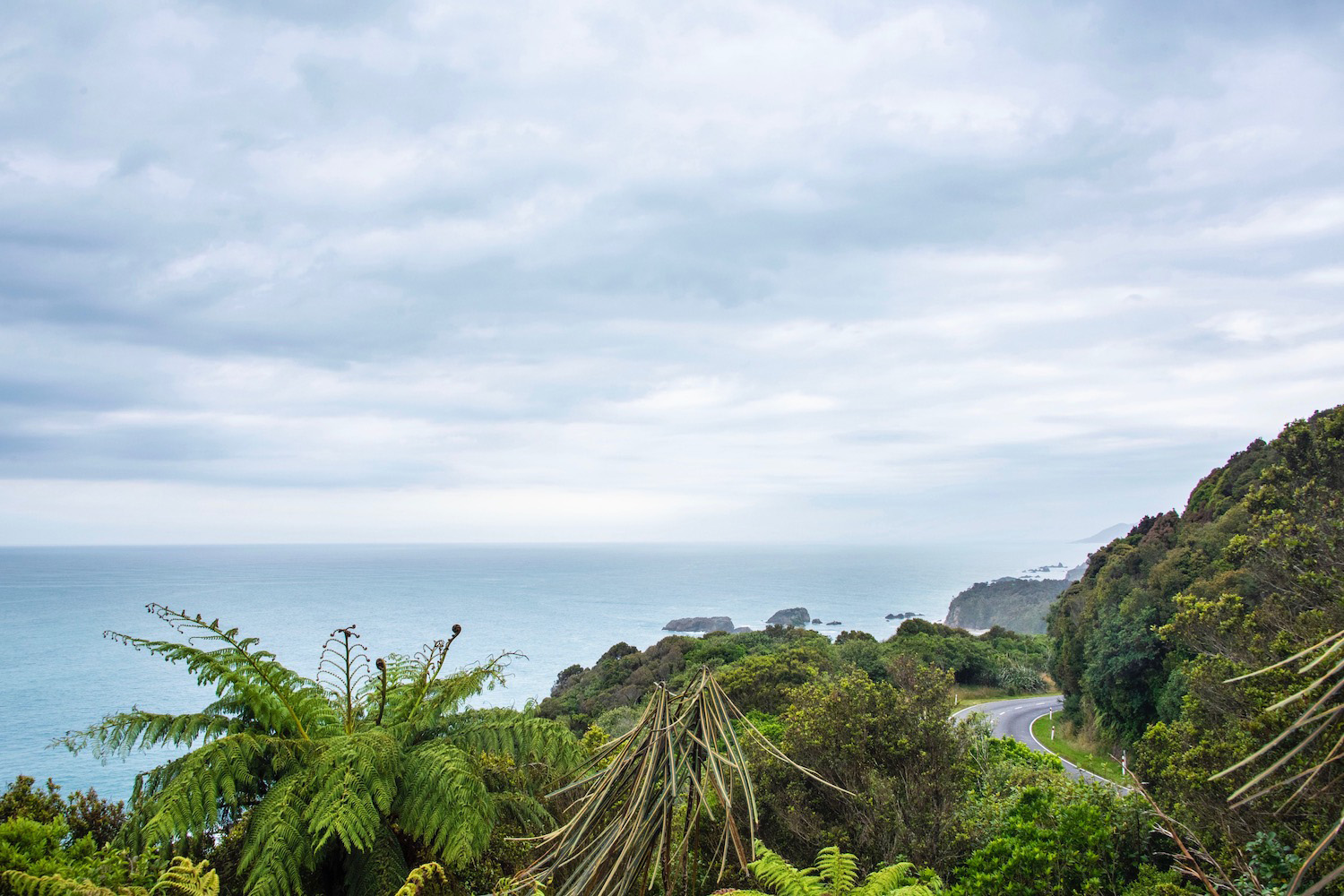 At least a thousand of them swarmed my person (and flew inside my car) as I parked at Knights Point Lookout—I didn’t stay outside very long. Around an hour later, as I pulled into Franz Josef town, I imagined both the hikes I planned to do would need to wait until the next morning.

I attempted to nap upon checking into Franz Josef’s YHA outlet, whose front desk girls complimented me on how young I look for my nearly-35 years. (I’d made a joke, when they asked me if I was a YHA member, about the fact that I don’t stay in hostels anymore because I’m “fucking old”—my exact words.) 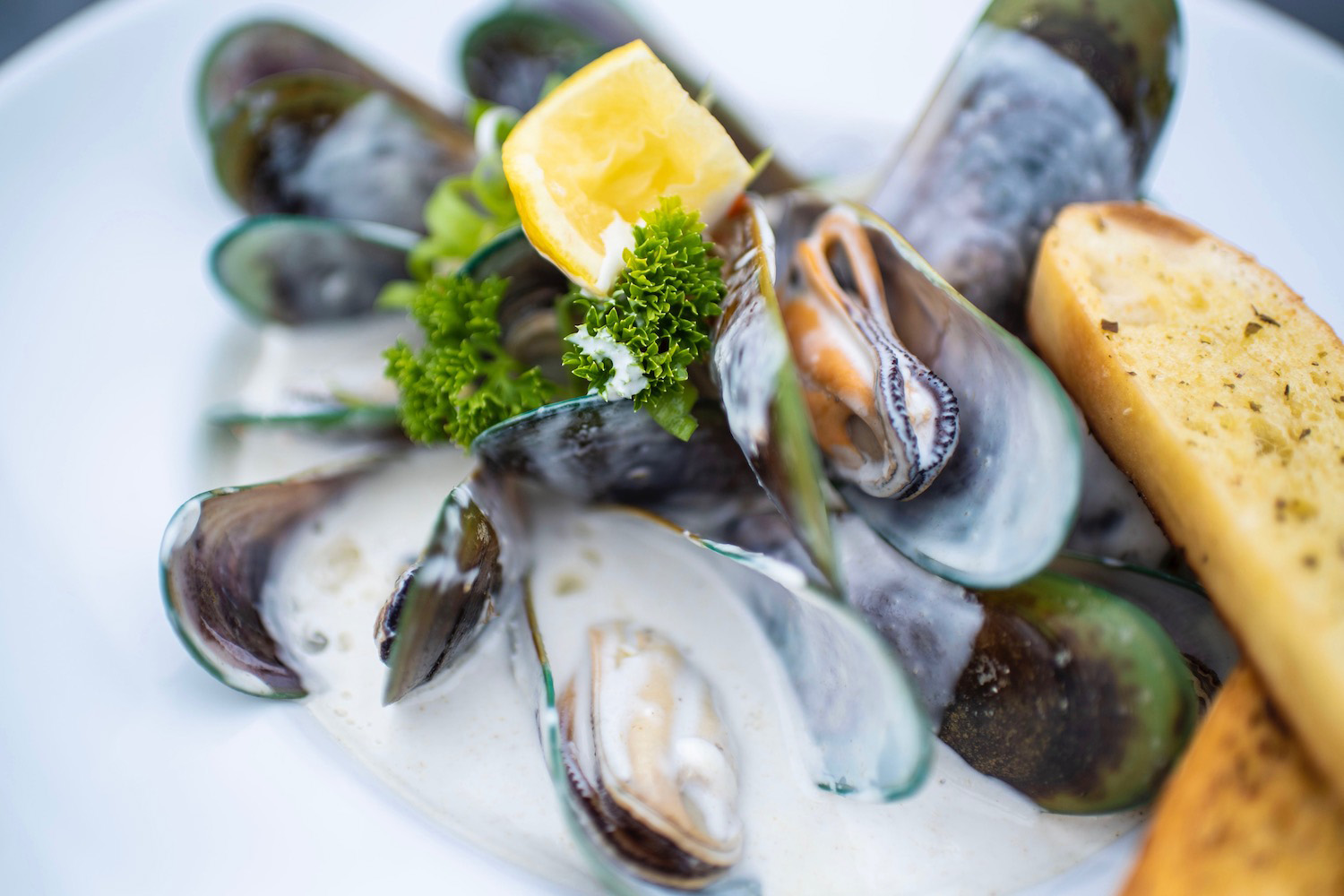 Unfortunately, I couldn’t quite fall asleep—this, once again, has been a common them of my trip—so I did decide to embark upon the Franz Josef Glacier walk. Initially, I simply planned to make the 20-minute return journey to Sentinel Rock, especially considering how much the clouds had lowered: The low reaches of the glacier were barely visible beneath them.

The way to the glacier, however, looked remarkably easy, in spite of also seeming rather long. I had a feeling skies wouldn’t clear enough to make traversing the Okarito Coastal Track worth it, at least not this evening, so I decided to go all the way. 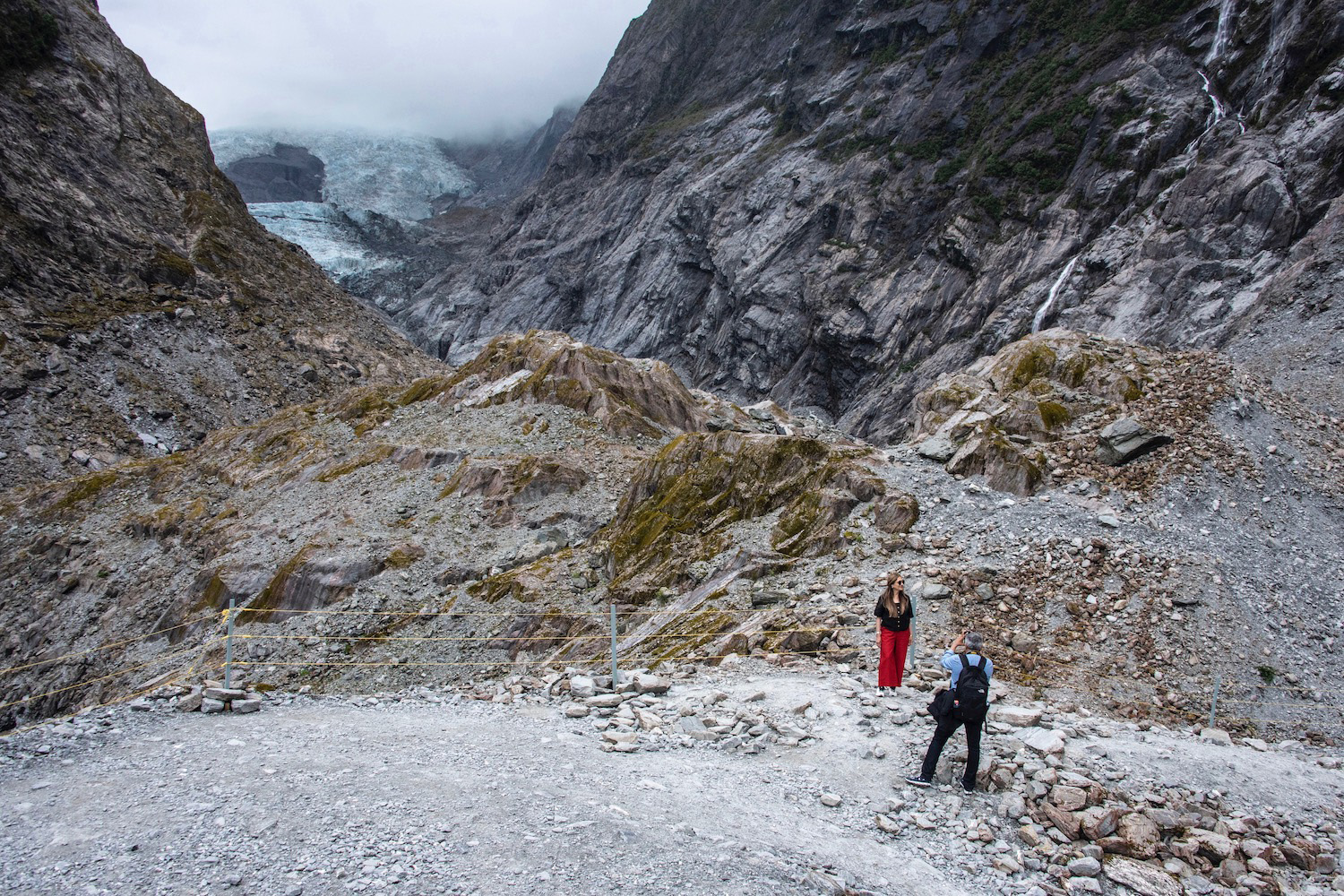 Upon arriving to the terminus of the track, where a group of young bros (and a token babe) were smoking weed I felt too lame (and too old, frankly) to ask for a hit of, I noticed someone’s grandmother wearing a popping pair of red pants. It always thrills me to see other stylish people in nature, particularly on days when members of the REI contingent seem especially judgmental of my own indifferent to their cultish frumpiness.

In the Northern Reaches

Another highlight of the Franz Josef Glacier walk was being able to photograph a helicopter landing on the glacier itself, though I didn’t so much as entertain partaking in this activity myself. Kobe Bryant’s recent misfortune notwithstanding, I’ve never been a fan of helicopters, to say nothing of how unappealing the idea of paying hundreds of dollars for a two-hour experience (well, one that isn’t skydiving) seems. 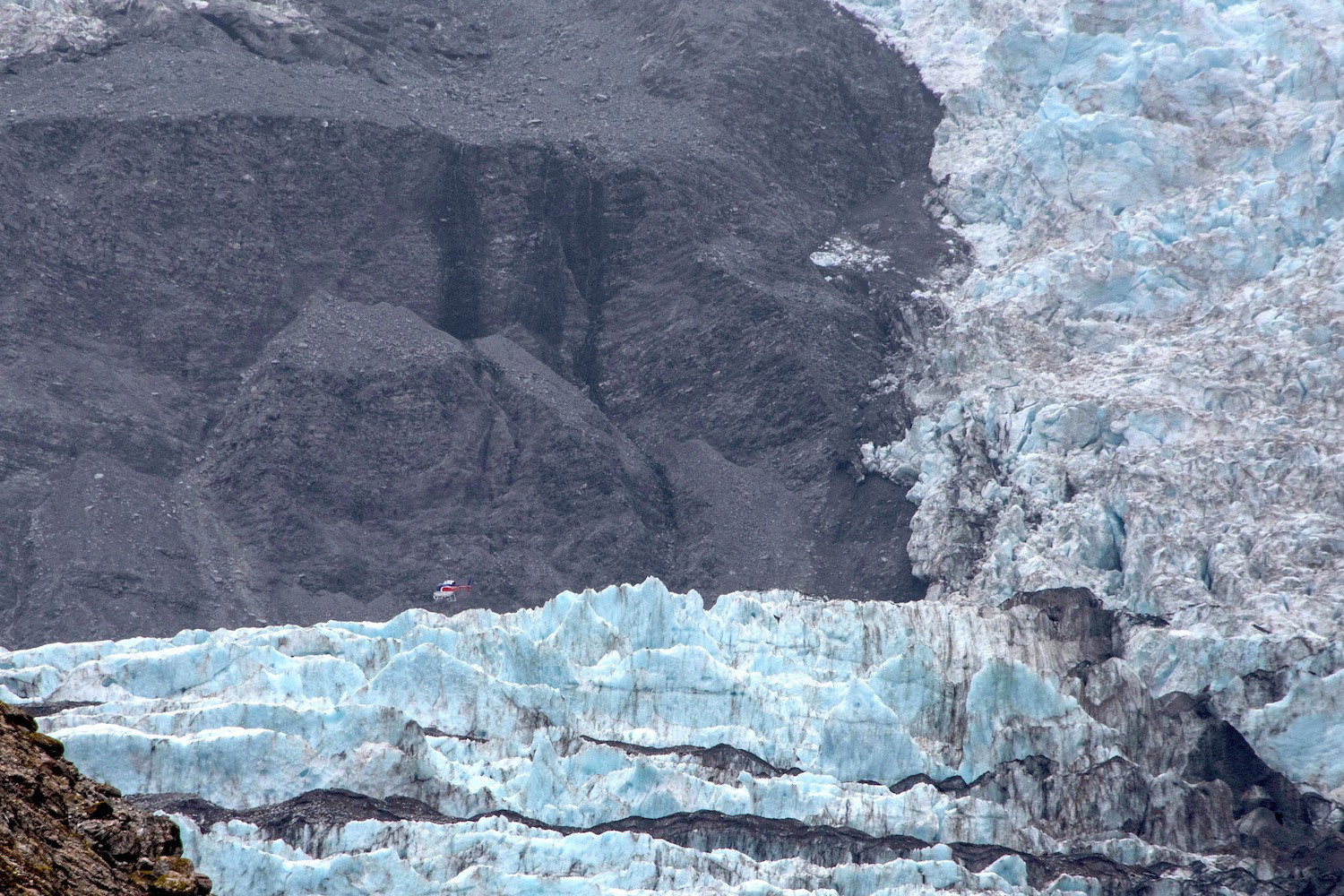 As I speculated, I did not end up doing the Okarito walk Saturday evening. Instead, I occupied my time having a drink with an interesting young man—one from Iowa, somewhat coincidentally, though he was apathetic to the imminent caucus and, I supposed, to the result of it.

Heavy rain had begun to fall from from the seemingly permanent clouds above the glacier town Sunday morning. I conceded not only that the Okarito Coastal Track wasn’t in my cards, but that I also wouldn’t be embarking upon the third-to-last morning run of my trip. I pointed my GPS directly from the town of Punakaiki, an idyll (at least under blue skies) in the northern reaches of the South Island’s west coast, though I knew I’d make some intermediary stops. 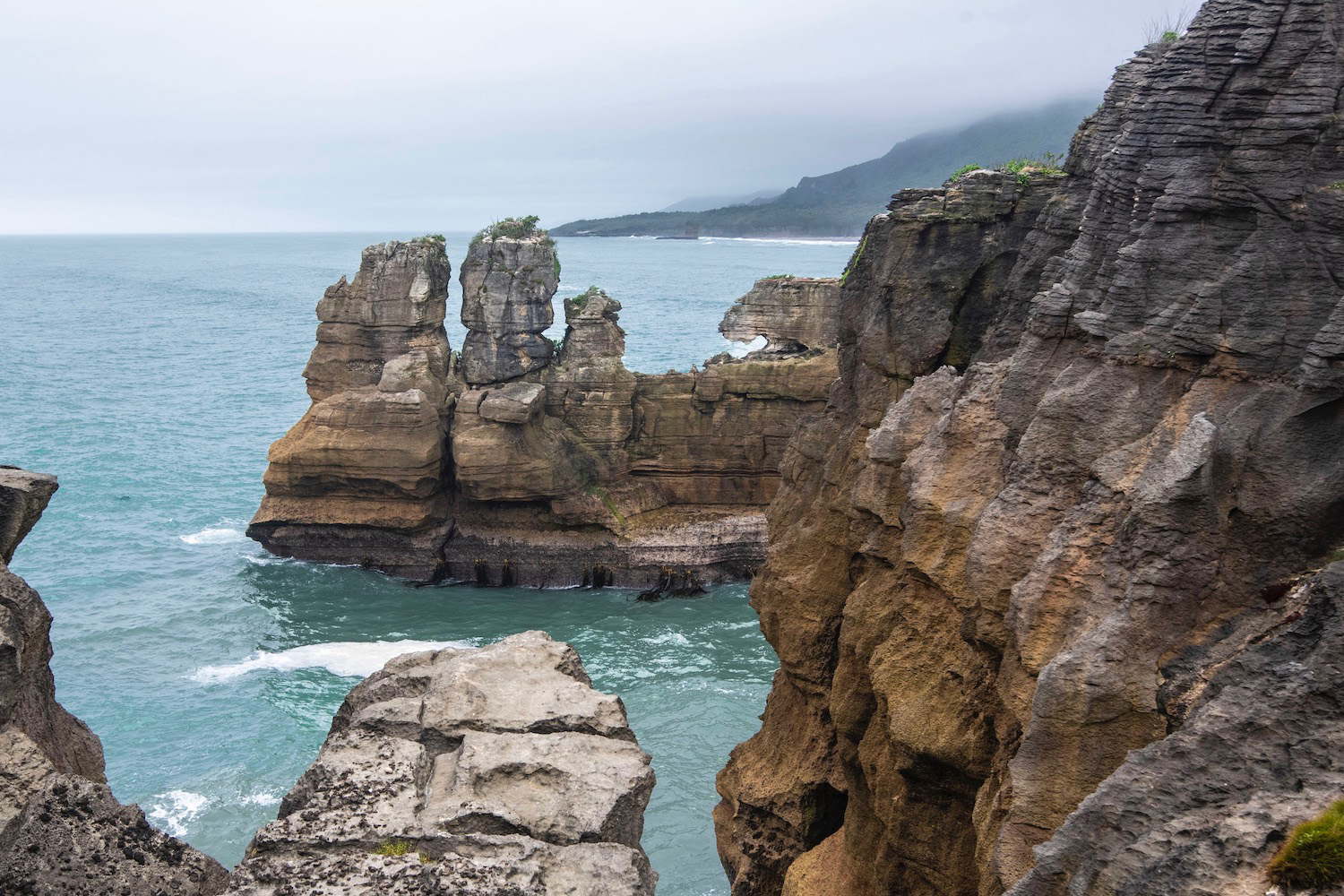 First among them was a small cafe in the town of Hokitika, where a reggae version of Akon’s “Sexy Bitch” made me laugh hard enough to shake off the devastation of paying 25 NZD for a plate of animal protein and rabbit food. The short stroll to Hokitika Gorge boasted totally different scenery than the Franz Josef Glacier walk had (notably, I think I might’ve seen a kiwi), although I did have a nice conversation about camera lenses with a German DILF named Tobias.

Way back during on the second of my two days beneath Mt. Cook, I’d been dining at the Chamois Cafe, when I learned that: A) A “chamois” is a type of animal and B) Chamois had been brought to New Zealand in the 19th century by Austrian monarch Franz Josef, for whom I assumed (and still assume—I haven’t verified it) the glacier I’ve written about above was named.

As I went to bed Sunday night, both unsure and agnostic about whether the rain pouring on New Zealand’s west coast would cease by Monday morning, I pondered how truly bizarre it was that anyone in Europe would care about this part of the world, at least prior to the Jet Age. Even—especially— a monarch: Certainly, people like the Archduke had bigger things to worry about.

I wondered if the man himself would’ve shed a tear over my relative misfortune visiting his namesake glacier and the wild coast just north of it. I wondered whether he ever completed the Franz Josef Glacier walk, or if he ever set foot in New Zealand—I imagined he hadn’t.